There are a lot of little dams in Illinois because a dam was built in the 1800s to power a grist mill and/or sawmill. In fact, these dams would be the reason a town grew along the river. In the case of Yorkville, an 1837 survey indicates there was already a dam across the Fox River near the present dam location. In 1952 the Glen D. Palmer Dam was built with a five foot head. It had an ogee crest but little attention was paid to the footing of the dam. It scoured the riverbed and created a roller.
That is, the fast flowing water coming from the dam hit the slower moving water downstream and created a hydraulic jump or boil which shoved water up and back towards the dam at the surface. People and boats get shoved against the dam by this backwards flow and couls nor escape. Even rescue boats with a high powered motor are trapped up against the dam if they cross the boil. And the boat fills with water and the rescuers become part of the problem rather than part of the solution. Some web sites talked about the number of firemen that got killed as well as the original victims. For example, the Cedar Rapids dam.

A video in DamSafety explains a roller better than I can. It then explains how people can be rescued from a roller. The erosion of the riverbed downstream of the Glen D. Palmer Dam was so bad that it was replaced in 1960-61. But they still did not pay attention to dissipating the energy of the water so it also suffered from riverbed erosion and produced a roller. By 1978 there had been enough drownings that they placed riprap in the scour hole to stop the roller. But by 1991 the riprap had been scoured out and 26 more people had lost their lives at the dam. 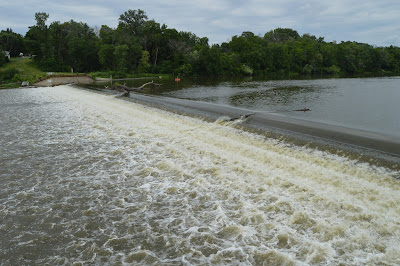 Five different structural alternatives were studied to determine the best way to alleviate the safety problem at the dam. A four-step spillway design was chosen.

On the south side of the river, a 11,000 foot long bypass chute was designed for whitewater sport. A Denil fish ladder was constructed on the north side. (DNR) 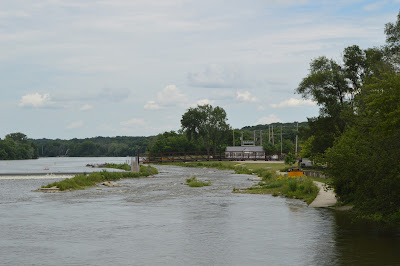 A closeup of the bypass from the IL-47 bridge shows the pedestrian bridge that crosses the bypass.

Below are upstream and downstream views from that bridge. You can see how they added rocks to create whitewater action. And you can see the IL-47 bridge in the background of the downstream view. 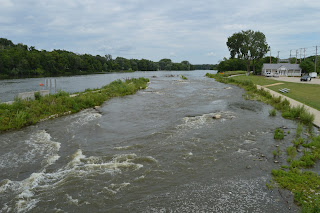 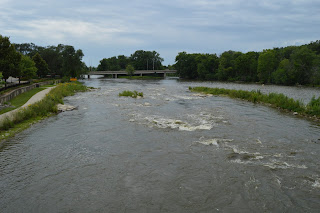 I then walked across the bridge and down to the end of the land between the bypass and the main river channel to take pictures facing upstream, 45-degrees, and 90-degrees across the bypass.

I then took three pictures from the shore to capture a waterfowl that was by the shore and then flew across the bypass as I walked by it even though I walked as far away from it as I could.

And then a couple overview shots upstream from the shore and then from a walk higher up in the park. 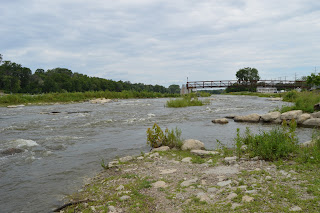 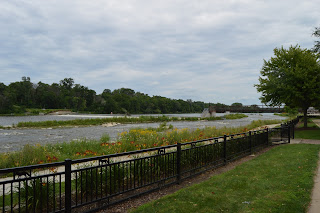 Update: More information on the danger of the rolling dam design.

Posted by Dennis DeBruler at 7:21 PM

Email ThisBlogThis!Share to TwitterShare to FacebookShare to Pinterest
Labels: wwDamRolling