This is another hidden nature neighborhood post, but this time it is practically in my own backyard! I found it when I took a look at the list of historic bridges in DuPage County.  I've lived in Downers for 38 years, and I did not  know about Hidden Lake before looking at Nathan's site because I had always assumed that the blob of green above Lisle on maps was the Morton Arboretum. I now see that Google does document Hidden Lake Country Forest Preserve, but they place it in the part that the public cannot access. You have to access it on the west side from IL-53. And take an access road south to a parking lot, which is not on the map even at zoom level 18.

After you get out of your car you can hear many different bird calls against the backdrop of road noise. I-88 is to the South and I-355 is to the East. It is a "aural" hidden nature neighborhood.

Please see Nathan Holth's collection of pictures for this bridge that includes many detail shots. In the following shot, I was trying to use the nice hand railing to frame a shot of the turbulence of the East DuPage River.  It had rained about a half-inch the previous night. There were some rocks on the far side of the river, and they were creating a relatively loud brook-babling noise. 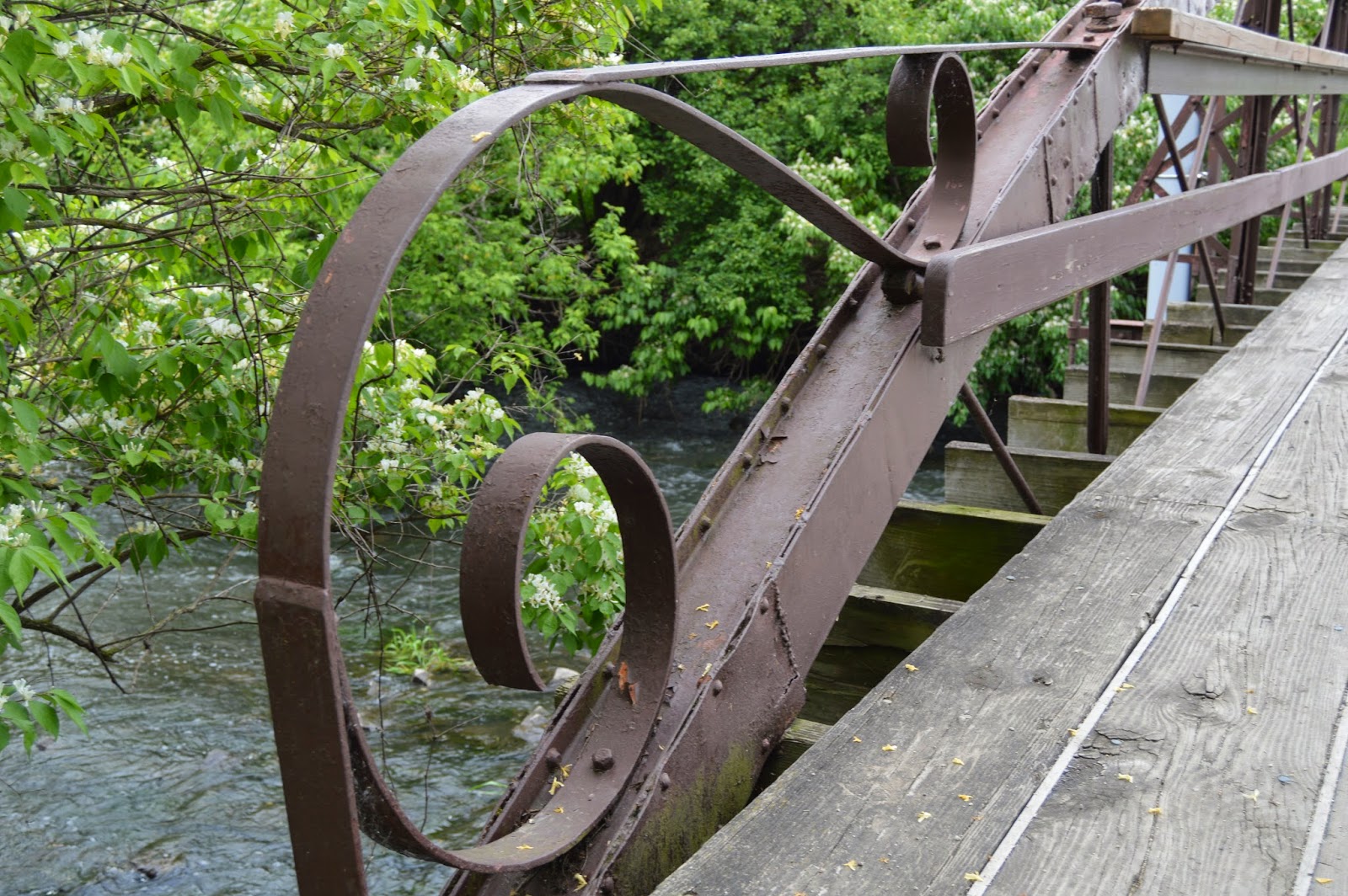 I can't reconcile this view with Nathan's view. His view shows a lot of rocks on the east side of the river, which would be the near side in the above view. But I saw the water being deflected by rocks on the north side. Did someone remove the rocks that are in Nathan's view?

In this shot towards the upstream, the turbulence is over some rocks on this side of the "island." I didn't notice it until I loaded the picture, but someone has done a poor repair job on the hand railing. 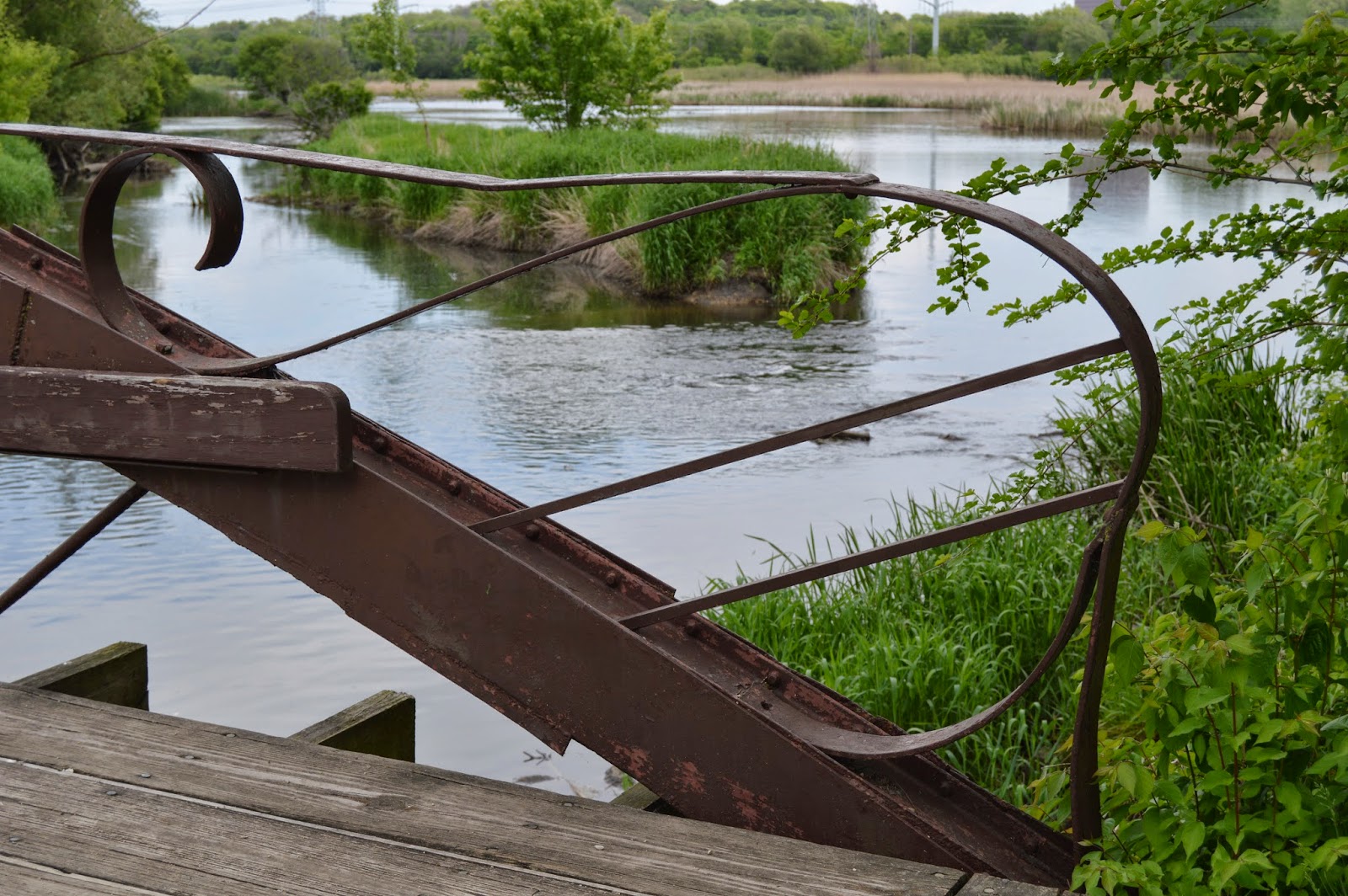 Another shot of the water turbulence. 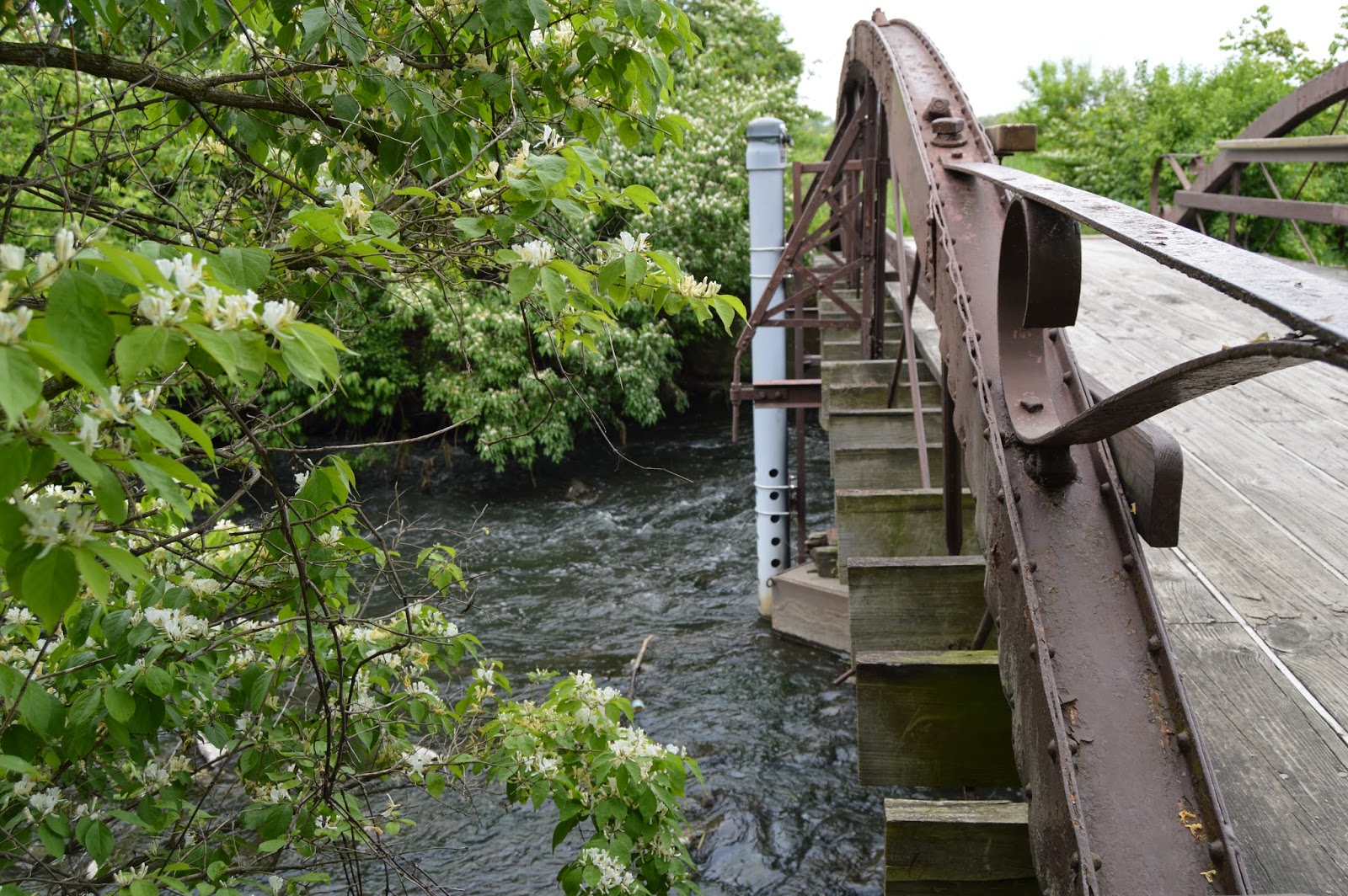 The brochure for this preserve says "The true Hidden Lake is a glacier-dug pond tucked away among mature oaks and hickories. For anglers, the 15-acre Round Medow Lake, created in conjunction with I-355, and the 10-acre Eagle Lake, dug in the shape of a soaring eagle by a previous owner as a memorial, off bass, bluegill, crappie, and channel catfish." It also says "It's also home to King's Grove, a remnant woodland of red, white, and bur oaks." Unfortunately, their map doesn't indicate where the Grove or Hidden Lake is. The brochure also mentions "over 2 miles of limestone trails."

I remember when I-355 was built in the late 1980s that one of the big issues was that the new toll road needed a little strip of land that was owned by the Morton Arboretum. Looking at a map, note that the arboretum used to own the land all the way to I-88. To resolve this issue, I remember that the Forest Preserve, Morton Arboretum, and the Tollway Authority came up with a 3-way trade. Morton would give some land to the Authority. The Forest Preserve would allow Morton to take control of some of their land. And the Authority would create Round Meadow Lake in Hidden Valley and create a new salt berm for Morton. And Morton decided that it would use this berm construction as an opportunity to do research concerning what plant types could better resist salt spray. According to the map, I-355 is elevated east of this green stretch so they probably needed the dirt from Round Meadow anyhow. I think they may have done some more earth moving for the Forest Preserve in preserves further north to improve their wetlands. In fact, from Wikipedia I find "$30 million (1987, $54 million in 2007) to alleviating environmental concerns, including moving and enlarging 117 acres (0.47 km2) of wetlands."

I also remember that the Tollway Authority promised that building the new tollway would not jeopardize the plan to retire the tolls by the year 2000. That plan was news to me when I heard about it in the late 1980s. I thought at the time that they were not serious. And, indeed, we are still paying tolls.

There were small trails along each side of the river on the upstream part so the following two views of the north elevation were easy to take. 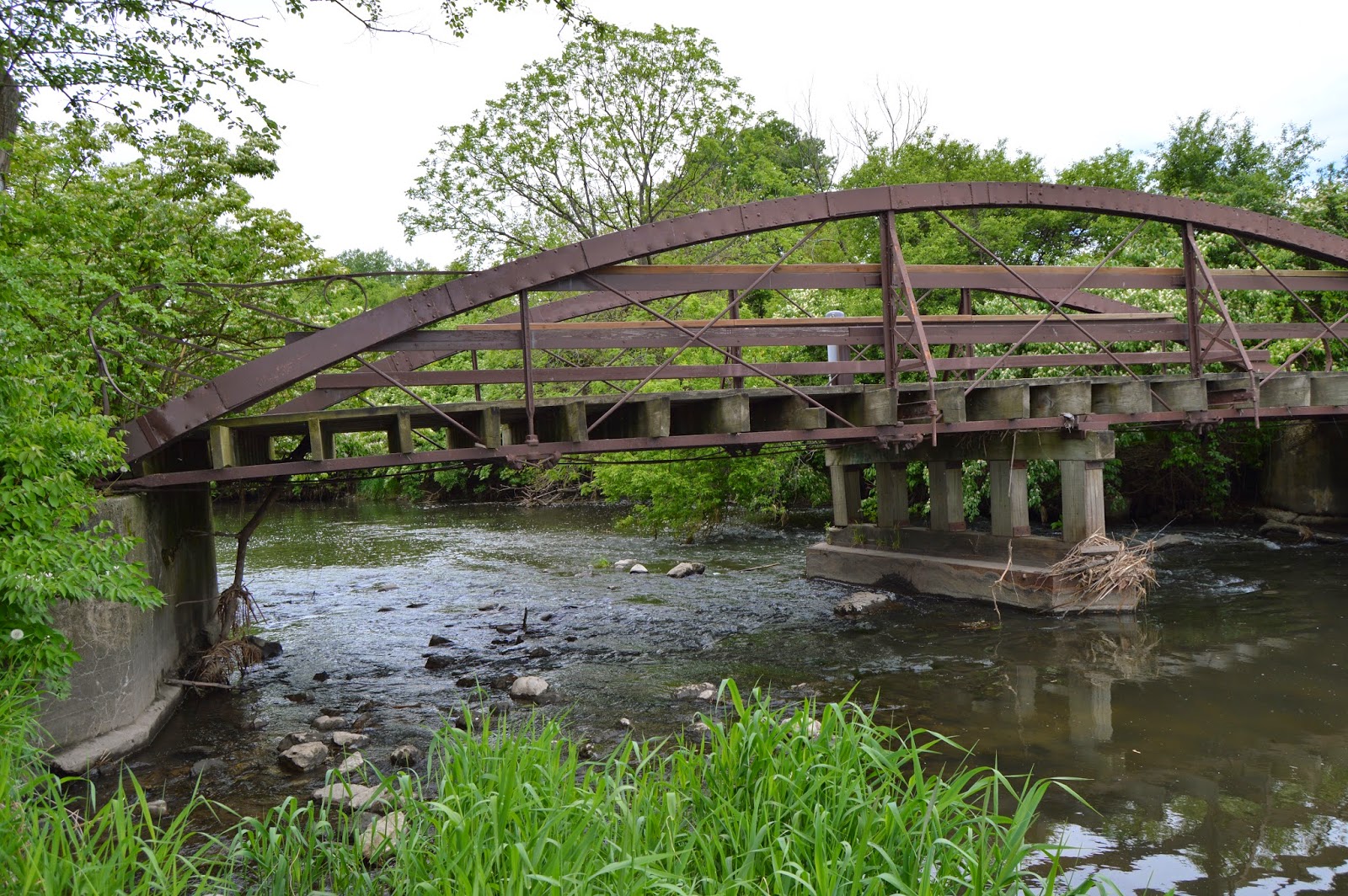 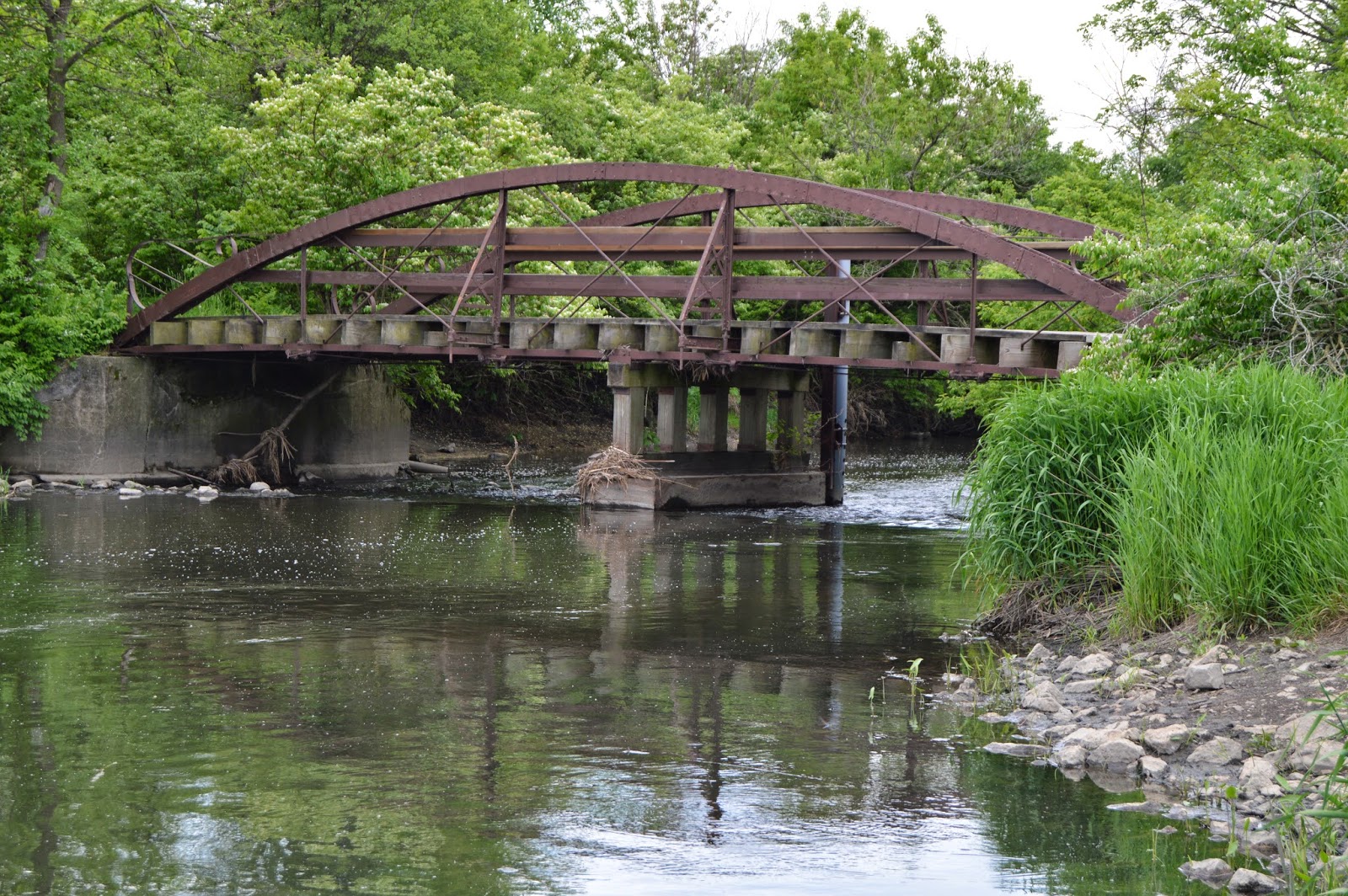 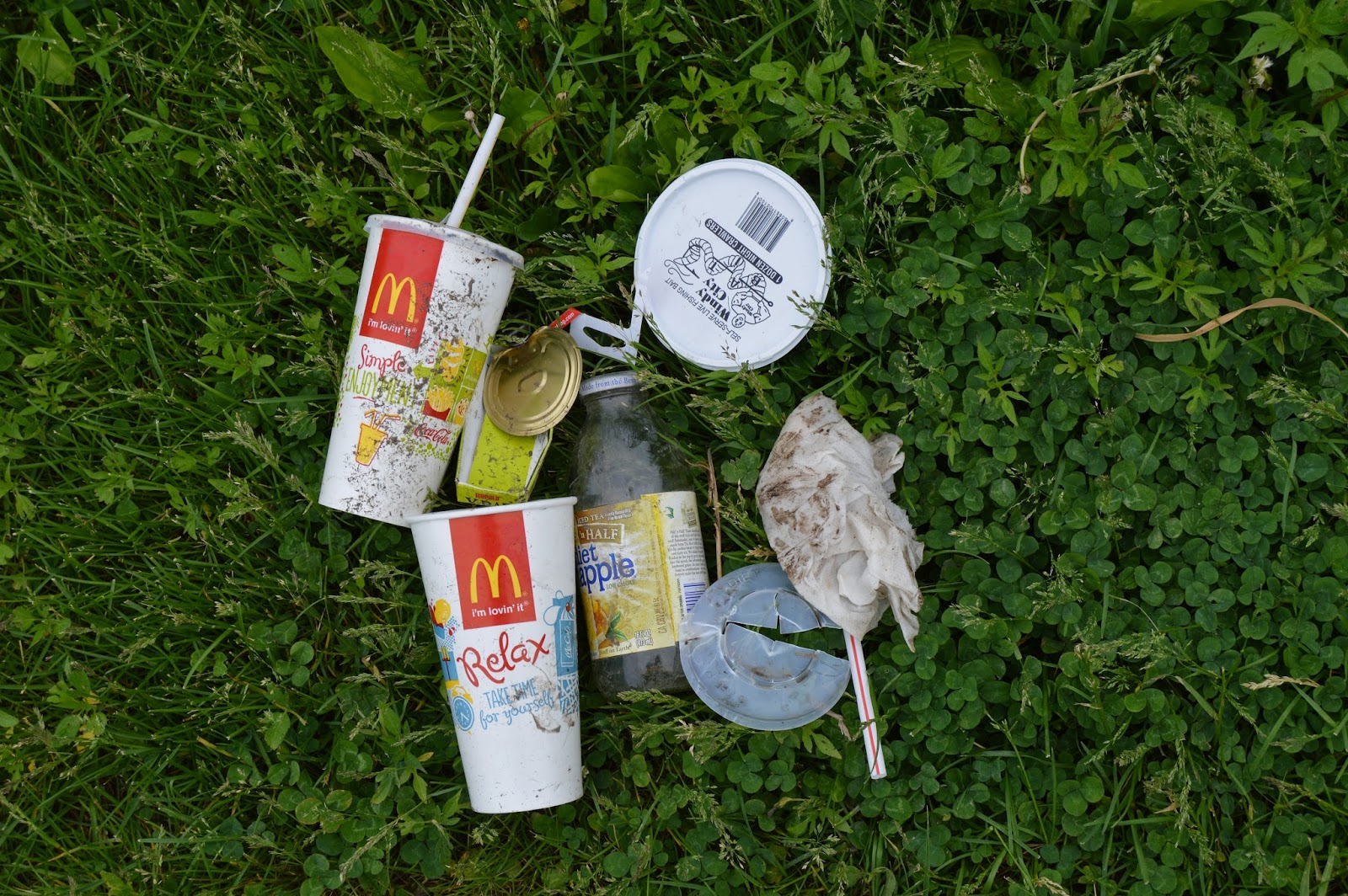 Unfortunately, I was able to collect and remove quite a bit of trash considering how little of the trails I used.


A view of Round Meadow Lake---the lake that earth-movers built.  In the background you can see two high tension lines in the major north-south corridor that ComEd has in the far-western suburbs. 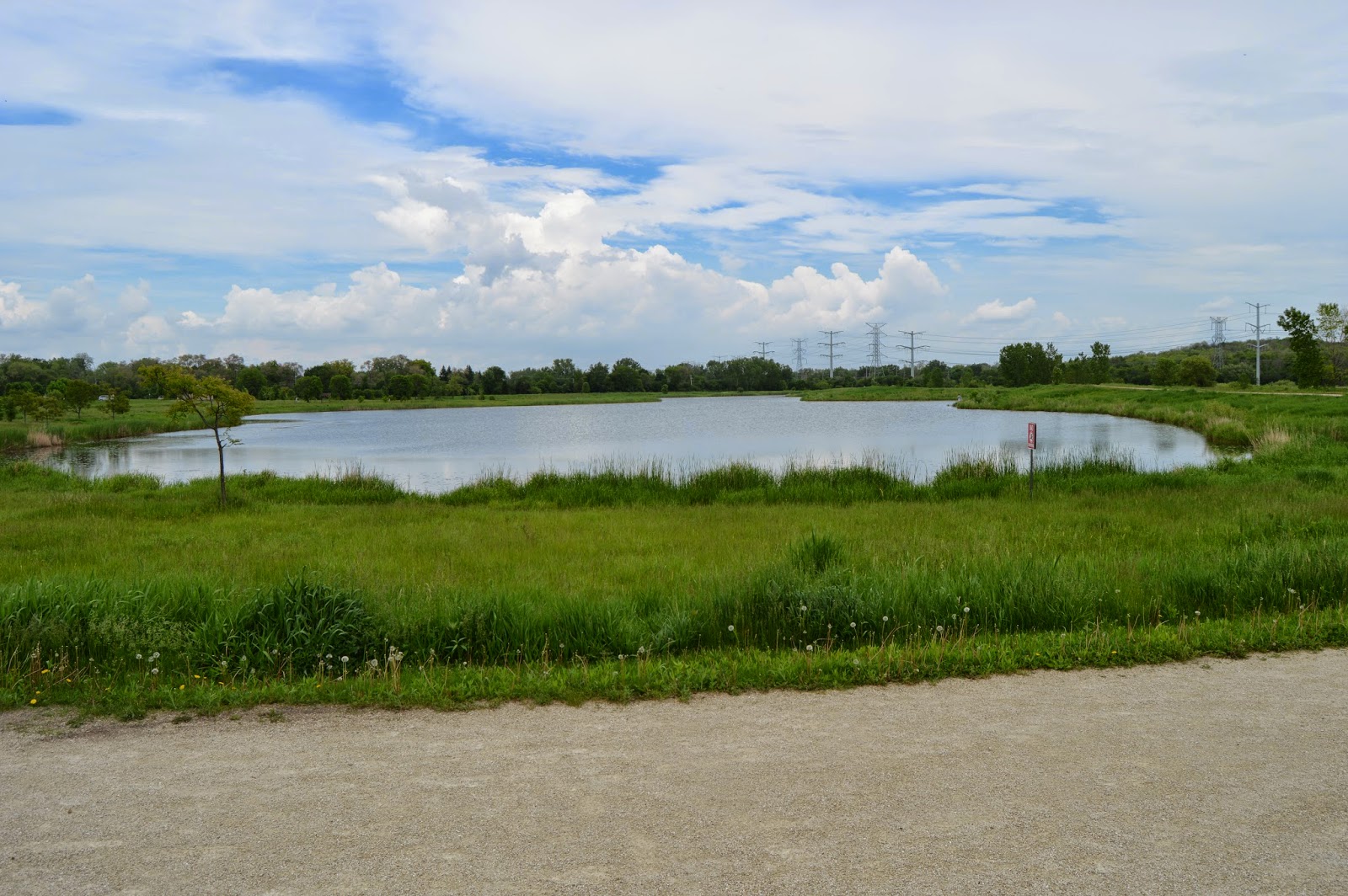 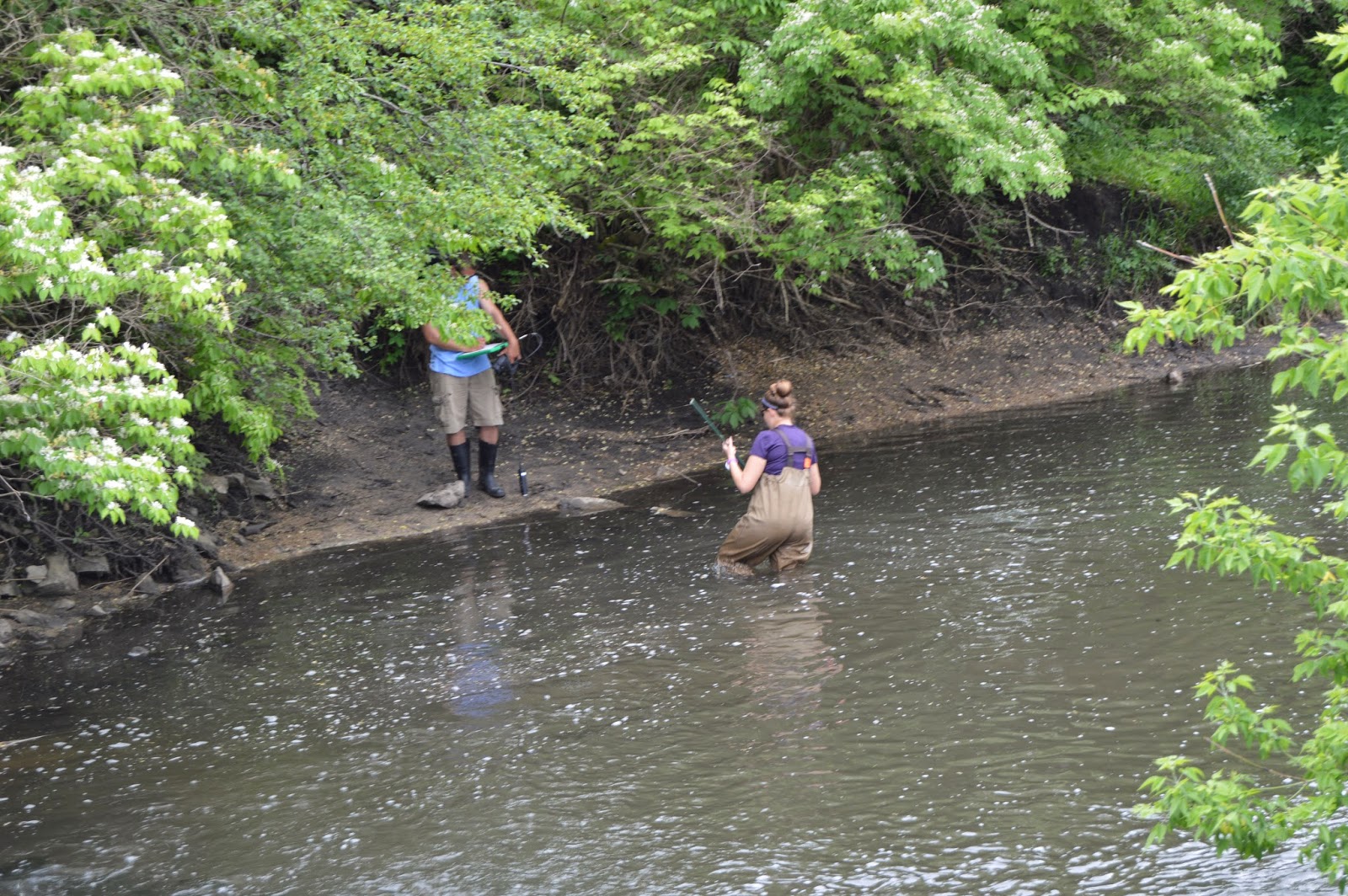 I didn't take this picture in time to catch the lady holding a rod in the water so that a sensor would be near the bottom. I went back and asked them what they were doing. They were measuring the conductivity and the Dissolved Oxygen of the water. I mentioned that the river was flowing heavy enough with enough turbulence that I could not imagine oxygen was an issue. I then understood that the equipment gives both measurements. Their concern was the conductivity. They had set up an electric shock station but it was not working because the conductivity was too high. I guess they decided they better check the conductivity before they built another station. The purpose of the electric shock station was to stun the fish so that they could do a species count.

Posted by Dennis DeBruler at 6:58 PM

Email ThisBlogThis!Share to TwitterShare to FacebookShare to Pinterest
Labels: bridgeArch