When I followed the CN/IC tracks to the Kankakee River to take pictures of the bridge, I discovered the town has a rolling (drowning machine) dam. I included the hydro-electric plant on the right (south). But I got just the corner of the big fishing platform they built on the left.

<update>
The "fishing platform "is the foundation of a water mill that used to stand here. Probably a grist mill. That would be the reason the dam was built.

</update>
In this satellite image you can see the big fishing platform between the road and the dam. This allows fisherman to safely cast into the boil of the dam. 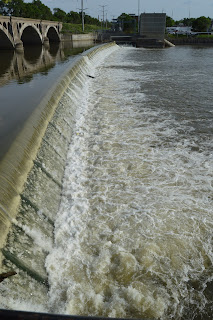 The view on the left is from the fishing platform. Below is a closeup where I noticed three volleyballs caught in the rolling boil that flows back towards the dam. That backflow can catch people and flood boats. The backflow can pull people down under the water. That is why this dam design is considered a "drowning machine." 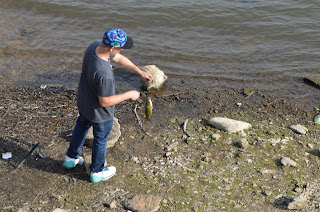 Of all the fishermen I have seen fishing downstream of dams, this is the first time I have seen one catch a fish.
(new window)

Posted by Dennis DeBruler at 4:40 PM