Here you can see where the river trail branches and goes across a trail bridge built inside the piers: 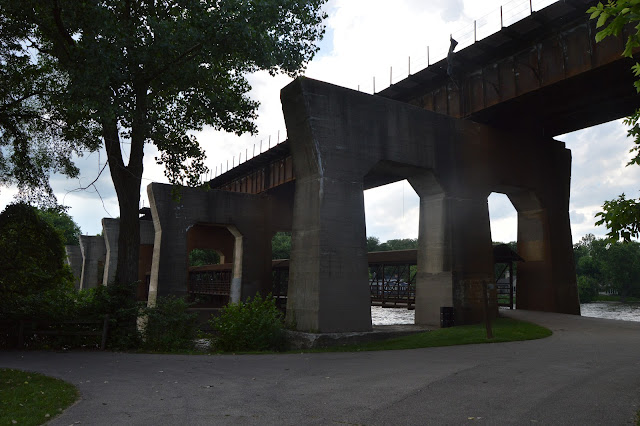 I had made a trip along the Fox River the previous week, but I made this additional trip because the area had over six more inches of rain. This view looking upstream (North) from the bridge shows how high the water is with respect to the Island Park and the IL-38 bridge. 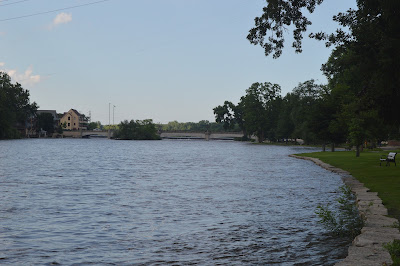 You can see where parts of the original stone abutment wall was replaced with concrete and three concrete ribs were added to strengthen the old wall. 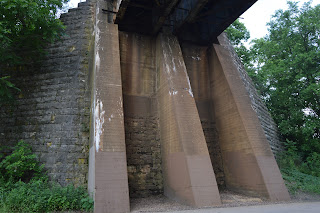 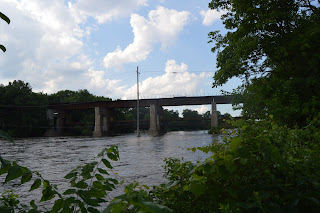 In this view, I can't get a decent view of the bridge, but I can catch some of the water turbulence. 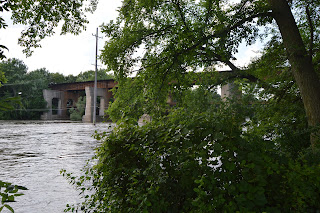 Google chose this bridge picture to represent the town when I searched for "Geneva, IL". Also of note is that someone took 360-degree views on the trail.


The above location is where I thought of taking a video of Big Boy when it crossed the Fox river. Fortunately, I got good enough video when it came to town that I passed getting a couple of seconds of video here. And Jacob Fischer took a better photo from this spot than I would have taken.
Another photo from the vantage point I was thinking of. It seems that it was more crowded than I imagined.
Jack Anderson got a view from the bridge, which is another shot I was thinking about.


A third rail is going to be added across the Fox River. This article mentions that the Chicago Protocol hours are 6-9 and 4-7.
Dennis DeBruler I found Peck Road, but it is parallel to and a couple blocks south of the railroad. So I can't figure out where in Geneva the third track will stop. Where is the overnight commuter storage yard for this line? It is interesting that the former Milwaukee line in Elgin and this line are getting another track over the Fox River next year.
Dennis DeBruler I have heard the rule about no freights between 6-9 and 4-7 called "the Chicago Protocol." BNSF does honor it. But once I was in Glen Ellyn between 5 and 6pm, and I saw two westbound freights along with six commuters during that hour --- a grain train and an intermodal+TOFC. Later (6:29) on my way home, I found the intermodal parked just west of I-355. As I was leaving on Glen Oak Road, Lombard, another westbound intermodal caught me by surprise at 6:38.
David Daruszka When the UP took over the C&NW the first thing they did was hold the AM Suburban rush so they could run freights. After they cleared the poop off the fan they found out that there were protocols for running freights in suburban territory. As long as they don't interfere with the trains I imagine they'll try to get away with whatever they can. I worked for both the C&NW and the WC and can attest to the "embargo" of freight trains during the rush hours.

I'm saving a satellite image since it is supposed to change.

A video of an eastbound coal train rolling along pretty fast. It has a DPU.
Soon as the Metras cleared, here comes the black gold. This bridge is scheduled to be triple tracked soon. 140-150 trains a dayNote this is one of the few reverse track operations in the US, leftover from C&NW daysGeneva, ILFox RiverC&NW heritage

Posted by Dennis DeBruler at 5:54 AM