(Satellite)
CS&SC = Chicago Sanitary & Ship Canal
This swing bridge has been replaced by a bridge that is high enough that it does not need a movable span.
They never replaced the swing bridge that was at Division Street, so traffic on this bridge can get backed up from State Street in Lockport back to Independence Blvd. I avoid using this bridge. But when I toured the Lockport Powerhouse, the bus driver had to deal with standstill traffic backed up over the bridge. It gave me plenty of time to take pictures of towboat activity. It is good that this is a high bridge because there is barge activity in this part of the canal.

4:01:06  We are heading east across the bridge. I took this photo to record the water level of the Des Plaines River. The canal is the little sliver of lighter blue on the left. 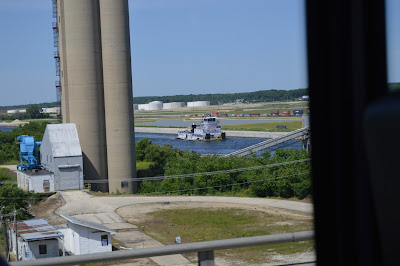 4:02:54 We have yet to get to the canal when I caught a towboat on the north side of the bridge heading downstream. Note the BNSF/Santa Fe container train in the background. 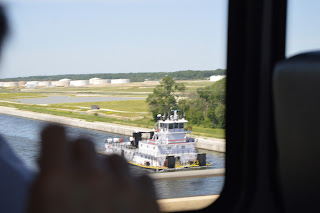 4:04:20  It is plowing water pretty high up on the bow. It is almost reaching the deck.
4:05:48  Considering he is going downstream with no load, it still has enough prop wash to show that it has two propellers. Note the pilothouse is fixed. So this towboat is for larger tows that would remain downstream of the Lemont BNSF/Santa Fe Bridge.

Posted by Dennis DeBruler at 10:30 PM