eBook has an 1880s photo of the 1868 bridge as it was built. Below is a photo of the modification made in 1903 to connect to the new bobtail bridge over the extension of the CS&SC to the powerhouse. (A bobtail bridge is an asymmetric swing bridge.) Specifically, the stone parapet was removed and replaced by a concrete ramp up to the level of the bobtail bridge.


The original Stone Arch Bridge was constructed in 1868-69, and provided access from Lockport to the western part of Will County and to Kendall County. The bridge has seven arches of approximately 28 feet each, and was built of local limestone. As constructed, the bridge also had stone parapets measuring about 4-1/2 to 5-1/2 feet high. The piers are reinforced with stone buttresses which, in turn, are protected by timbers from ice floes, barges, etc. The opening of the Chicago Sanitary and Ship Canal in 1900, and the concern about possible flooding led to alterations in about 1903. The Chicago S&S Canal was extended for an additional three miles, and dikes constructed along either side so the canal could be raised as much as fifteen feet above the surrounding area. The embankment was of concrete, with an earthen fill. The parapets on the bridge were removed, and the grade of the crossing raised with poured concrete. The arches remain intact.-- Historic American Engineering Record

This description obviously applies to the original 9th Street Bridge. I was able to find the HAER report that had this description.

The following two images from Global Earth capture the before and after view of the bridge.

I include two older images of the bridge because they show how nature takes over man-made structures if they are neglected.

1903 Bobtail Bridge over the CS&SC


eBook has a photo of the bobtail bridge that was here until the high-bridge was built in 1972. This bridge is longer than the other two bobtail bridges that were built when the CS&SC was extended South of the control structure: 135th and Division. In a view looking east [eBook, second photo], we can see the handrails of the stone arch bridge.

Per Gary's comment, this bridge is in the background of the following photo.


West of the CS&SC bridge is a bridge over the Des Plaines River. It was closed when I was trying to chase a towboat through here. It was open when I started this blog in 2014. Is it closed because the 1950s bridge is bad or because someone is even more paranoid about security. Evidently the bridge is bad because, according to Global Earth, between March and April of 2015, an alternate bridge to  MWRD's powerhouse was built.
It looks like they may be fixing the bridge.

The second photo on eBook shows that truss spans crossed the Des Plaines River before this 1950s bridge was built.

The movable bridges at 135th and 9th have been replaced by bridges that are high enough over the canal that large towboats that don't have retractable pilothouses can fit under them. The top of modern bridges is boring, but the bottom can be interesting. (If you want to see the top, you can always play with Street View.) When I encountered the barricades shown above indicating that the old 9th Street Bridge was closed, I followed the example of others and parked along the road and walked across the bridge.  Walking is kinda nice because you catch photos that you would otherwise miss. This photo reminds me that the new bridge is high not only to clear towboats on the canal but because the canal itself is about 15' above the land here. 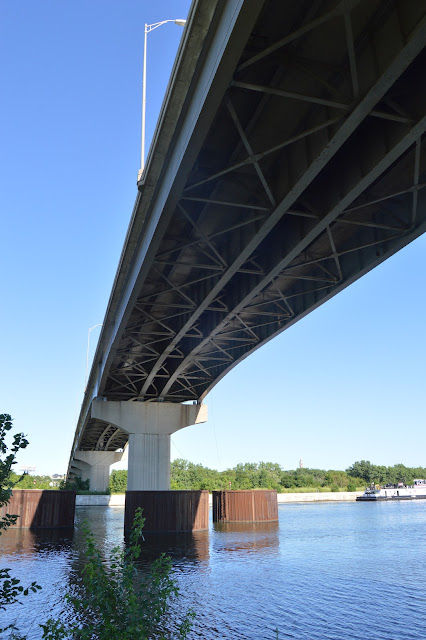 This photo shows the curve in the bridge over the Des Plaines River.
It is a good thing that this bridge is above the river traffic because eastbound traffic often backs up from the traffic light at State Street all the way across the bridge and down the right lane of IL-53. Fortunately, when I go from Joliet to Lemont, I can use the 135th Street Bridge instead. While on a bus for a tour of the Lockport Powerhouse, we got stuck in the eastbound traffic. It was a Saturday and the traffic was a mess during all of the hours that I was in the area. Since the driver was using her brake pedal instead of her accelerator pedal, I was able to catch the Robert A. Knoke travelling southbound under the bridge.

Posted by Dennis DeBruler at 9:56 PM