UP and BNSF intermodal trains dump trucks on Indiana's Interstates

The Borman Express is that part of I-80+I-94 between I-65 and the Indiana border, I avoid using it and I-64 by taking the I-355, I-80, I-57, US-52 route. That route has the added advantage of avoiding I-294. But I recently went with my daughter to Athens, OH. Since she was driving, we took the route suggested by her GPS, which was the route I used in the 20th Century: I-294, I-80, I-65. I mentioned before that I think of Borman as "dead mans alley" because you have to brake from highway speeds to creeping along. I'm happy to report that this safety issue is gone because now you creep the whole distance. I didn't have access to my camera, or this blog would probably be spammed by photos of an interstate crammed with trucks. But of particular note is that the two lane ramp from I-65 to Borman was creeping along with mostly trucks. Furthermore, I-65 northbound was all jammed up because of the clogged ramp. The ramp would have been clogged because westbound, as well as eastbound, traffic on the Borman was clogged. This was after 2:00 pm on a Tuesday. Hardly the rush hour.

When we stopped at a filling station because my morning coffee had been processed, I moved my camera up front were I could easily grab it. While taking photos of highway congestion, I noticed a container truck.

So my daughter and I started looking for container trucks in the opposing lanes. I'd say around 10% of the 18-wheelers were hauling containers. Once, we saw three dray trucks in a row. I had assumed that the containers that BNSF and UP were dumping on Chicagoland's roads where containers going to Chicagoland's businesses and that containers going further east would be moved to an eastern railroad. I did wonder if the interchange between railroads was done with steel or rubber wheels. But now I have learned that containers headed to Indianapolis are also dumped on Chicagoland's roads. I wonder if containers to Detroit and a lot of other Midwest cities are also dumped on Chicagoland's roads. I know from studying the UPS Chicago Area Consolidation Hub that packages going less than 500 miles use trucks and packages going more than 500 miles use trains. (Other railroads have trackage (or haulage) rights over BNSF so they can directly serve the Willow Springs Yard.) But I had assumed (hoped) that if a container was already loaded on a deep-well car that a train could compete with trucks for shorter distances. It has become obvious that assumption is wrong.

I knew about JB Hunt and ONE, but I learned about the Hub Group on this trip because several of the containers on I-65 had their name and logo. "Hub Group’s drayage operation is stronger than ever. Known as Hub Group Trucking, we are one of the largest dray providers in the United States, and a leader in international and domestic intermodal drayage. How can we improve your everyday dray?" [metamorphosis] Looking at their web site, I have learned that I need to learn what "3PL" means. Hub Group has white papers on the history of intermodal and "The Metamorphosis of Drayage." The later paper confirms that a dray driver can spend most nights in his or her own bed. It also means that they can buy "day-cabs," which I'm sure are cheaper than sleeper-cabs. They have been doing electronic logging for a while so the new Federal laws requiring electronic logging are not disruptive for them. With 3000 tractors under their control, the are the eighth largest trucking firm.

Here is a shot of another one at a more readable angle.

I learned that taking photos of an object with an approach speed way over 100mph is a little tricky. I deleted all of the partial images except for this one. Even CSX avoids their own railroad for container traffic.

I noticed a container storage facility north of Indianapolis that had quite a few ONE containers. Looking at a satellite image later, I found Multi-Modal Trucking. Note that there are no railroad intermodal yards close to it.

I'm going to experiment with using the blog's video import rather than putting a really short video on YouTube. I took a video to capture how slow the traffic was going. This was on I-70.


There were trucks as far as the eye could see. 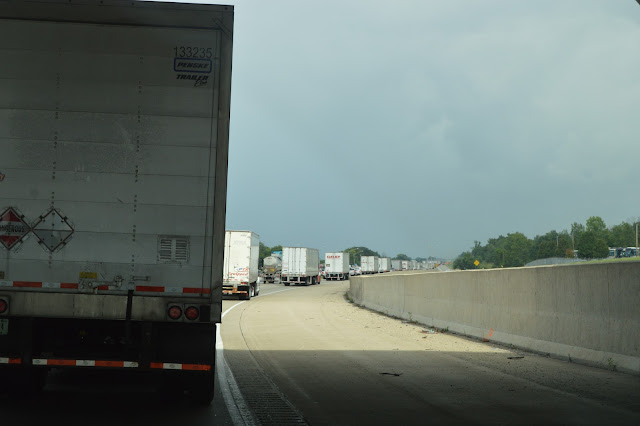 We didn't see much container traffic on I-70 except for another CSX drayage. It was parked on the side of the road, and we went past it way too fast for me to get a photo of it. But I did take a photo of the next millage marker to remind me of the CSX container and to record its location. Looking at a map, is it coming from North Baltimore to the Columbus area? If so, and if  it is using Interstates, the route is rather circuitous.

(Facebooked)
Ean Kahn-Treras CSX uses a big chunk of the old Monon between Maynard Jct in Munster, IN and Crawfordsville, IN. From there they have inherited a section of old Conrail track east/southeast to Indy. The ol’ Peoria and Eastern which was a NYC subsidiary I believe.
Ean Kahn-Treras Q642 and Q643 and the Barr Yd-Indy train and the counterpart. A couple other unit trains of grain/fertilizer/agricultural products run this way as well. Less that 10 movements a day for sure.
Dennis DeBrulerYou and 1 other manage the membership, moderators, settings, and posts for Chicago Railroad Historians. I'm glad to hear they run carload traffic between Chicago and Indy. I do know that CSX wanted to service a big intermodal yard near Crete, IL. But I think the Crete people looked at what happened to Elwood, IL and fought it. (And then along came Harrison Hunter who closed down the use of the cranes at North Baltimore and cancelled their participation in the Baltimore tunnel enlargement and probably made all container traffic construction mote.) I'm normally not sympathetic to NIMBY because I live in Downers Grove just a few blocks away from The Racetrack. But I have to admit that intermodal yards appear to be bad news for the local highways.

Posted by Dennis DeBruler at 6:48 AM

Email ThisBlogThis!Share to TwitterShare to FacebookShare to Pinterest
Labels: railroad