The recently appointed head honcho at Amtrak is a former airline executive. He has been doing a good job of methodically wrecking Amtrak service. (E.g. Southwest Chief and Cardinal) So a railfan style video of the California Zephyr may soon be Industrial History. Fraser is on the D&RG Moffet Tunnel Cutoff route that UP now owns. It used to have heavy coal traffic. A couple of years ago, I read an article that indicated the coal traffic has dried up on this route. The article further stated that there is not enough freight traffic on this route to justify UP maintaining it to Amtrak's 79mph standard. (UP's main freight route is on its original transcontinental route up in Wyoming.)

I attended a social function in Fraser, CO. Since there was no traffic, as I went East over the tracks on Eisenhower Drive, I drove slowly so that I could look down the tracks in both directions for headlights. When I looked to my left, I saw the rear of a parked Amtrak train! So I turned left on Railroad Avenue and stopped to take a photo.

I drove down Railroad Avenue so that I could get a better view of the head end. 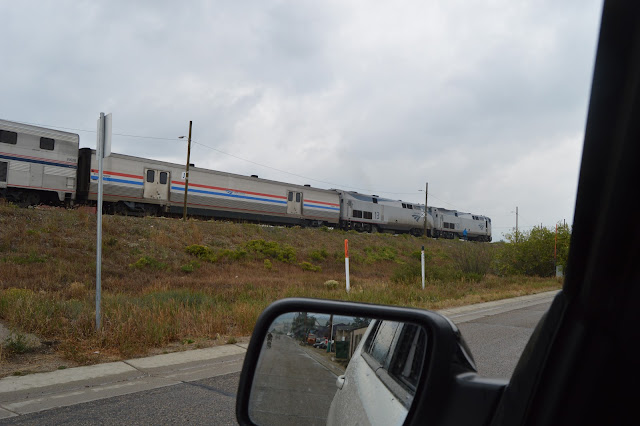 The horn sounded indicating that people should get back on board.

There was very little visible exhaust as the engines pulled the train out of the station.

The tracks in this area parallel US-40, and I was headed west on US-40 anyhow. I was going too fast to pull in at the first crossover I saw. Unlike the midwest where there tends to be a country road every mile, there were no more crossovers. So when I got to where US-40 was going to leave the tracks, I stopped on the shoulder. It took a while to cross US-40 to the tracks side because the traffic was heavy. But it turns out I had plenty of time because the train was going slow.

1217, the headlight is down by the sixth power pole.

1218, the headlight is down by the fourth power pole. I have no idea why an Amtrak train would be going so slow. I can't believe the track is so bad that it has to go this slow all the way across Colorado. I was irritated by the slow speed because it was sprinkling rain and because I needed to be someplace east on CO-83. But I hung in there and got a video with my 18-55mm lens, complete with a raindrop on the lens.
(new window)


On the way back, I wasn't driving so when my wife spotted a westbound freight parked on the tracks, I grabbed some shots. This is an overview shot. I knew the photos would not be "railfan quality." But I wanted to record that there was freight on this route.

Zooming in on the right side of the photo verifies that this was a manifest freight rather than an oil train.

While standing on the steps of the east entrance of Fraser Historical Church, we saw the tops of some westbound locomotives. We counted seven of them. And it appeared that the tops of the freight cars were open hopper cars. I walked over to Eisenhower Drive so that I could look down to the crossing and confirm it was a unit coal train. So maybe freight traffic has returned to this route.

Since I wasn't driving, I grabbed photos as we crossed the tracks when we were back to Eisenhower Drive.


In Tamernash, CO, I spotted a railyard from the road, so we turned of US-40 to check it out. Obviously, most of the tracks have been removed. I'm looking east so the topmost ridge is the Continental Divide. During the three days we spent in Fraser Valley, this is the clearest view we got of the mountains. There were wildfires burning in west Colorado, and later the smoke made this valley hazy. During some evenings, the smoke did make the sun look red long before it actually set. 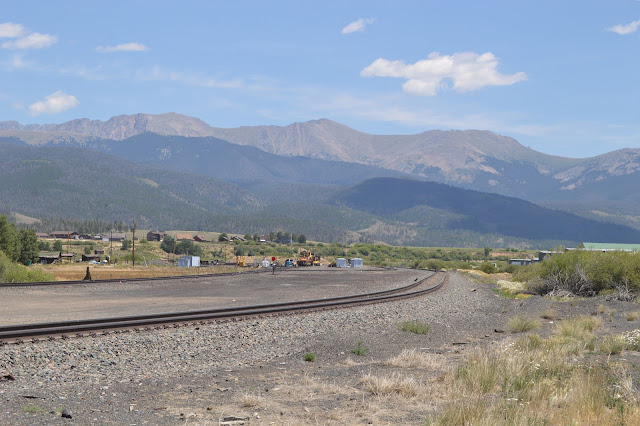 We drove down the road along the north side of the yard so that I could confirm those yellow things were MoW equipment. I took a couple of overview shots, and then closeups of the equipment.

Tamper with the laser site folded up.

I believe the white thing in the middle is another model of a ballast regulator. The trailer on the right is a high pressure washer with waste water recovery and recycling built for UP by HE Hydro Engineering. The white tank is half full of some yellowish liquid. I scanned through the training video on the above linked page to try to find a screenshot of the referenced rail mats, but I was not successful.

So the Amtrak train should not have been going slow because of a lack of track maintenance. But I was surprised when I looked closely at the above crossing photo of the Amtrak station because no spike head was tight against the rail or tie plate. Every spike seems to be about an inch loose. But I've seen loose spikes on UP's, BNSF's and CSX's mainlines as well.

No way to run a passenger railroad (updated)
Posted by Dennis DeBruler at 11:16 PM