I'm doing both railroads in the same post because you can't take a picture of one without taking a picture of the other. Also they were all built in 1912 and designed by Waddell and Harrington. (Historic Bridges)

The two bridges in the up position were NYC/Lake Shore & Michigan Southern. The bridge in the down position is one of the two PRR/Pittsburgh, Fort Wayne & Chicago bridges that used to be here and is now Norfolk Southern. The "metal sculpture" on the right is the remnants of a B&O bridge. The cantilever truss in the background is the I-90 Skyway Bridge. (We will see better views of the Skyway later.)

Fortunately, the gate of  the South Chicago & Indiana Harbor (see sign below) was open so that I could get a shot without a chain-link fence in the photo.

Unfortunately, it forced me to use an angle that placed a power-line tower right in front of the NS/PRR bridge. By the way, when I first arrived, by the time I parked my van and had walked to the sidewalk, a security guard was on his way to meet me. I told him I was interested in pictures of the bridges. I verified he would not let me go on the property. And he did not offer to escort me. That is why all of my pictures are from the public sidewalk.

You can clearly see the gap between the PRR bridge and the two NYC bridges that was created when the second PRR bridge was removed in 1965 (Historic Bridges). I still can't find why they chose to remove one of three unused bridges. And why not leave a second bridge connected to the rail system so that they can do repairs on the first bridge without shutting down a major rail corridor? Even though all of the steel mills are gone and the river is no longer used for iron ore, it still sees at least big Laker Boats for grain. 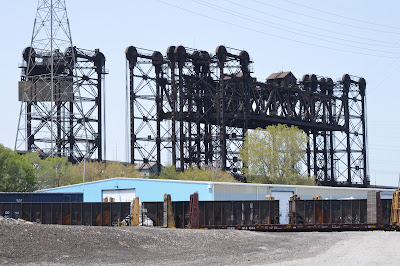 I went back to the van to get the telephoto lens, but I'm still stuck with the tower and some trees blocking the view. 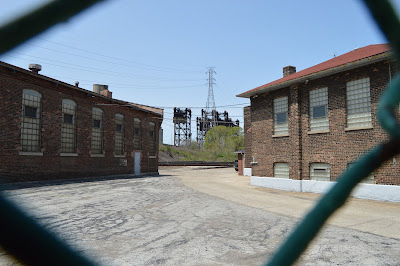 I did take a through-the-chain-link picture to get another angle. Another reason for this picture is to catch two of the classic industrial buildings of the SC&IH. The building on the right is the one that has the above MITTAL sign. 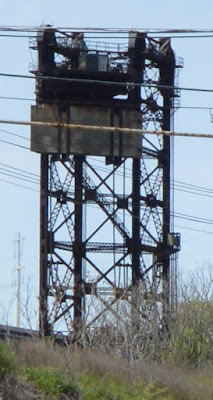 I took another picture from the 95th Street Bridge because it had an oil train that adds scale. I missed the locomotives because when they arrived I did not have a clear shot. I think it was BNSF power on this NS track. Fortunately, the train was slow and long enough that I was able to get to the 95th Street  Bridge while the tankers were still rolling across it. 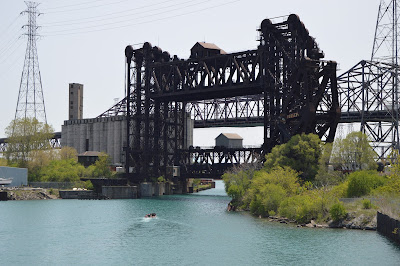 Because of this fried fish food takeout, it is easy to find a legal parking space just west of the 95th Street Bridge.

Obviously, they smoke their fish themselves. They did a very brisk business the entire time I was there. Of course, it was the first weekend in May with decent weather, which is why I was out also.

I got gutsy and did a little trespassing up an access road. Now that I see the bridges are obscured by power poles and a little tree, the next time I visit this area, I'm going to get gutsier and go up to where the road curves. That would be the old B&O RoW. But this is a good view of the Skyway and the gap caused by the removed PRR bridge. 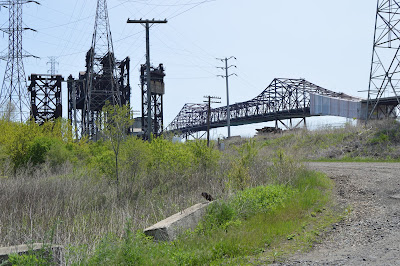 J Robert Burger posted a view from the Skyway and from the East.

Update:
Robert Daly posted the two photos below with the comment:


PRR and NYC bridges over the Calumet River, Feb 18 1974, looking northwest. Tower controlling the PRR bridge was known as River Branch. Shortly after the PC merger in 1968 the NYC bridge was closed and put in the raised position, where it remains to this day. The PRR bridge continued in service through Conrail and now NS. B&O had a parallel bascule bridge to the right, which was rammed and partially destroyed by a lake boat some time in the 1980s.

David Vondra Robert Daly I am a B&B Supervisor for NS. That’s one of my bridges
Robert Daly Does NS have any plans for the old NYC bridge?
David Vondra Robert Daly Man it would help. Amtrak now and again pops up but for now no.
David Vondra Amtrak owns the first bridge and I believe Conrail owns the northern bridge.
David Vondra Dennis DeBruler I try to imagine 10 main lines running through this area and it blows my mind.
Dennis DeBruler David Vondra two passenger and two freight tracks for PRR and NYC plus 2 for B&O. I wonder how fast the Broadway Limited and 20th Century traveled over these bridges. I read the 20th Century did track pans around Chsterton at track speed and the track speed was 85mph. What is today's speed limit for this bridge?
David Vondra Dennis DeBruler 30 mph. Both freight and passenger. If the track profile is not up to snuff the structure takes a beating. I believe back in the day though the steam would run by at track speed. When I’m out there it’s hard to imagine the famous people that have gone over these bridges
David Vondra Bob Lalich I can’t even imagine....70 mph
Dennis DeBruler David Vondra How close to operational is the Amtrak/NYC bridge? For example, does it have all of its copper? I've heard stories of an Amtrak train needing five hours to get from Elkhart to Union Station.
David Vondra There’s nothing left as far as electrical is concerned, plus they were DC when pinned up so all would have to be new.

As far as the Amtrak an hour an a half is about normal provided traffic keeps moving.
Dennis DeBruler At least the Metra/Rock Island overpass removed one of the traffic conflict issues.
David Vondra Dennis DeBruler The BRC connection at 509 kills me. Very difficult to get track two for maintenance. But the Metra flyover was huge.

Dennis DeBruler shared Robert's posting
Bob Lalich PRR began dismantling bridge #1 in 1965. There was a terrible accident resulting in the death of two men, I believe. The remaining portion of the bridge stood for nearly three years until final demolition in 1968.
Jon Roma I heard about Amtrak owning one of them, and heard the story but forgot the details. I think it was some sort of deal to get additional capacity west of CP 482 (Porter). I'm sure after being derelict this long, the copper would still be scrapped and renewed in kind even if it hadn't been stolen. No matter what, it's going to take a lot of work for bridge out of service for 50 years to be restored to service, assuming that ever happens!
Chuck Kulesa I have no info of ATK owning any of the lift bridges over the Calumet ...
Dennis DeBrulerYou and 1 other manage the membership, moderators, settings, and posts for Chicago Railroad Historians. If you click the link above, you will find a couple comments by David Vondra: 1) "I am a B&B Supervisor for NS. That’s one of my bridges" 2) "Amtrak owns the first bridge and I believe Conrail owns the northern bridge"
Chuck Kulesa I worked ATK for 40 years in the engineering dept and this is the first I heard of ATK owning the Calumet bridge ...

Flickr photo of an Algoma Central boat going under the bridges

An outbound Dimitrios K with a cargo of grain assisted by two G-Tugs.

A closeup of the tops of two of the bridges.

Arturo Gross posted a 1998 Art Gross Flickr photo with the comment: "Conrail C40-8W 6077 leads an eastbound off the BRC across the Calumet River bridge on Chicago's southeast side Aug 1998." The photo includes a signalling bridge over the four track mainline that uses Pennsy's Position Light signal heads. The angle is shallow enough for the left two heads that you can see they use the "red eye."
Mark Bilecki Sr. Nice shot, just north of Colhour yard in Hammond
Steven W Panek CP 509 to be exact

Art Gross Flickr 1995 Photo shot from under the skyway.
John Smatlak Flickr 1986 Photo from the same vantage point but with a scrap yard in operation.

Ted Gregory posted a photo of a ship going under the raised bridges.
Rod Truszkowski I was csl until 96 then crl till I retired 4 years ago. The bridge and track was to be sold to the csl the president of the csl was hemming and hawing that night the bridge was raised to let a boat thru somehow it wasn't raised high enough and the boats bridge caught the b&o bridge. The story was because the bridge tenders were going to loose their jobs they may have been a little miffed. The bottom line is the csl was paying only 500,000 for the bridge it was insured for 2,000,000. Someone screwed up on that one .
Rod Truszkowski Now if you noticed one of the spans for the PRR is missing. They were going to remove 3 spans across the river in the 50's. During the removal of the first one it collapsed blocking boat traffic for some time. Also men were killed and injured so they said raise the other to and left them that way.
Dennis DeBruler I would also guess that they are all owned by NS. Conrail went from 8 tracks to 2. Now taxpayers are being asked to add back a third in Indiana and west of Grand Crossing.
Ted Gregory They already have. Triple track and new interlockings added from around Chesterton to the IL state line. Clark Rd Crossing now has 3 NS mains in addition to all the CSX and CN tracks
Dennis DeBruler Rod Truszkowski, I had to wait until I got back to my maps to check a detail. I read a Facebook comment that the freight cars were split according to the reporting mark on them. If I remember correctly, NS got the NYC cars and CSX got the Pennsy cars. But the routes were not split according to former NYC vs. Pennsy ownership. For example, CSX got the NYC water level route (Lake Shore & Michigan Southern) east of Cleveland, but NS got it to the west. This is because NS's NKP parallels the NYC east of Cleveland. Then, as Ted mentioned, NS switched from NYC to Pennsy just after it entered Illinois. NS got the Pennsy's main east of Crestline, OH, but CSX got it west of Crestline. CSX then dumped their part on the new Chicago, Fort Wayne & Eastern. When I studied the history of the Pittsburgh, Fort Wayne, & Chicago, I noticed that Crestline was a boundary between two railroads: Ohio & Pennsylvania and Ohio & Indiana. (The Fort Wayne & Chicago was the third railroad chartered to make a connection between Pittsburgh and Chicago.) It is interesting how corporations charted in the mid 1800s helped determine the segments that got split between NS and CSX. http://industrialscenery.blogspot.com/.../prrs-pittsburgh...


A Flickr 1995 Photo taken from the top of a tower   (source)
Dennis DeBruler You can see grass on the roof of the Norris Grain Elevator and the arc of one of the sheaves.

Posted by Dennis DeBruler at 11:18 PM