Aban/CN/EJ&E's Bridge #710 over the Calumet River

Historic Bridges (above) not only covers this bridge which was built in 1974, it has pictures of the swing bridge it replaces that were published in 1897 and five links about United States Steel and/or Gary, IN.

USS used to own EJ&E and the purpose of this bridge was to access the South Works. The bridge is always in the up position because the South Works no longer exists.


Bridge 710 found on ejearchive.com. I swear this poor bridge was hit at least twice when I worked in South Chicago. It was replaced by the bridge that is there now. Problem is the bridge is more or less stuck in the up position because of burned out motors.

Scott Pugh added "Bridge went out of skew because the motors were not serviced and burned up after the CN took over."

Daniel Kopack observed "It must be the same curse as 728, that got hit 3 years ago,10 seconds before I went to raise it,earlier this week, the new fenders got messed up by, you guessed it, same damn boat and captain...."

So they built a new bridge only to become unusable a few years later. It doesn't matter because it has become another bridge to nowhere.

Andrew then posted a picture that showed the old and new bridges. Of note is the two material handling cranes in the background. I believe the black "silos" are air stream heaters for the blast furnace whose top you can see in the background on the right. That would be part of USS South Works.
Update: 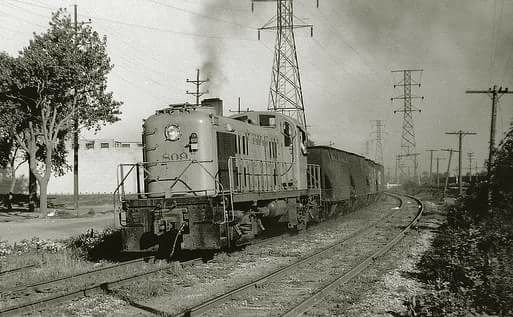 Some comments on Joel J. Sieracki's posting.
Michael Bachmann As the supervisor in charge of the bridge in the fall of 2009, I had it lifted and it never moved since. We were having electrical issues and the CN did not want to invest money into it, the end.
Ron Harris The 1st 8yrs. of operation, I was sent over when at times the Westinghouse engineer, The Dutchman, had trouble. Got it going every time. Greg Bailey and I usually adjusted the limits at least twice a year-sometimes more.

Dave Durham posted three photos with the comment: "EJ&E bridge spanning the Calumet River North. Of Ewing Ave, taken after 1968, Jet Lowe, photographer."
Dave Durham: I did see that these photos were taken by Lowe in summer 1999, part of the NPS Chicago Bridge Recording Project. [I wish I knew more about that project.]
Marty Gatton shared


Some closeups of old and “new” Elgin Joliet & Eastern Railway Bridge 710 at mouth of Calumet River. Old swing bridge served Illinois/US Steel South Works in South Chicago for almost 80 years, 1896-1974, connecting it to Gary Works and other rail lines via lakefront through East Side. Replaced March 1974 by vertical lift bridge, which served South Works until plant closed in March 1992. EJ&E continued using bridge for freight traffic with other rail lines until 2009, when Canadian National Railway bought them out. Bridge has been raised and out of service since fall 2009.

Bob Lalich Was the lift bridge span erected at Great Lakes Dredge & Dock?
Michael Mora Bob Lalich don’t know but most detailed source I read said it was erected about a half mile up river on barge. Article by RF Beck chief engineer of EJ&E at time. Link https://archive.org/.../proceedingsofann761975amer/page/432
Dave Wielosinski Bob Lalich yes it was... I was an inspector for it. The "lift" bridge was built at their yard at 92nd street and floated to the site.


A posting with a couple of orange engines has an informative comment: Justin D'So D'Aloisio We go out at 0300 every morning. Run to South Chicago and back. I assume they ran from Kirk Yard.

Posted by Dennis DeBruler at 5:02 PM