(No Bridge Hunter) The red rectangle indicates where the bridge was. I included more of the 1939 aerial than I normally do because I wanted to show how much industry was north of the river. The IC mainline routes did not need this bridge. The bridge for its northern branches still exists. So did the IC own it to access the industries north of the river or did an industrial/terminal railroad own it?
A 1974 topo map indicates C&NW had a connection to it. So maybe it was a terminal railroad. (A terminal railroad is one that is just in a city that connects the Class I railroads to each other and to local industry.) 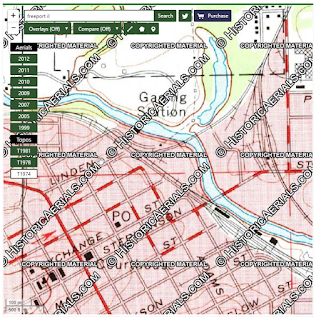 Posted by Dennis DeBruler at 9:18 PM