Rotary car dumpers were developed by electric power utilities in the 1970s to more efficiently dump unit trains of coal. They are now used for other commodities as well. I've seen a paper about the longitudinal forces in an ore train [RailKnowledgeBank] and the cargo in this photo looks like wood chips.
The first freight car type developed by the railroads was the flatcar. But soon after they put walls on the sides to hold bulk commodities. Of course, the problem with this design is that the contents had to be shoveled out. In the late 1800s, the hopper car was developed. The gondola is still used today for non-bulk commodities. Here I caught some gons carrying loads of pipe.

Today I can still find hopper cars in Maintenance-of-Way use. This cut of hoppers was stored in BNSF's Naperville, IL yard when they replaced 18,000 ties in M2 in one weekend with two crews. I think the hoppers is where the GREX Slot Machines dumped there old ties after each nights work. 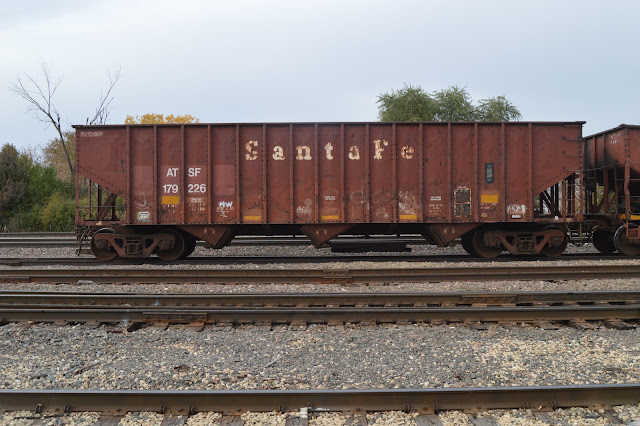 The rivet construction clearly shows where the slanted bottoms are so that the cargo will flow out of the unloading doors.

In addition to reduced capacity, the hopper cars had the problem that frozen chunks of coal could easily block the unloading.

In this overview I took of the yard when I arrived, I have a view of this hopper on an angle. Zooming in (belwo), we can see daylight in the middle of the middle hopper gates. That is because the cars have a center sill down the middle as part of the car's frame. 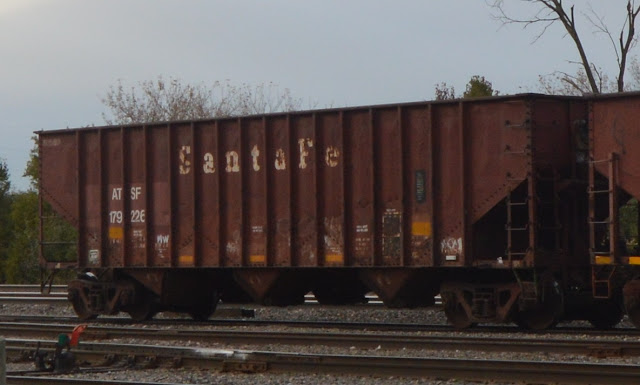 In the early 1970s, the Clean Air Act required power plants to reduce their sulfur emissions because they were creating sulfuric acid that rained down on states to the east of a power plant. (That act did such a good job of cleaning up the air that some farmers now need to add sulfur to their fields. They are no longer getting it for free from the rain. [DeBruler])  For reasons I have not been able to figure out, power plants in the Southeast, Indiana and Kentucky were able to afford adding scrubbers for sulfur; but power plants in Illinois claimed they could not afford it. They chose to switch to coal from Wyoming instead of the Illinois coal that they had been burning. Since coal was now going to be hauled long distances, the power companies developed the unit train concept. Since they were buying entire trainsets of coal cars, it was worth their while to spend more on the unloading facility so that the freight cars were cheaper and so that they were easier to unload. Specifically, they installed rotary dumpers and bought high-walled gondolas with a rotary coupler.

In this screenshot from a video of a car being dumped, we can see the opening for the car is offset. This offset rotates the car around the axis of the coupler.
A different color of paint is added to the end of the gondola that has the rotating coupler so that, when making up a train, it is easy to make sure that all of the rotating couplers are on the same end.
This photo sums up the history of high-walled gondola cars.The one on the left is an old, steel, flat-bottomed car. The one on the right is a newer, aluminum bathtub gondola. The bathtub gondola became popular in the late 1970s. [matts-place]  (Another source says the bathtub gondola was developed in the early 1990s. [TrainBoard]) I can't tell by looking if it has one or two "tubs" on the bottom. The tubs increased the capacity and lowered the center of gravity.
Initially I was confused by the slant of the bottom at the ends of the bathtub design. Since the goal was to increase capacity, why slant the bottoms at the end? The following photo proves my theory, the slant makes room for the equipment that would normally be under the car. Since the tub(s) now occupies the space under the car, the air brake equipment is in the space under the slants. Because it is backlit, you can see the round edge of either the air tank or the air-brake cylinder in the middle of this photo. Note that we can see the center sill and air-brake equipment under the car with a flat bottom.

The age of the HEQX bathtub gondola above is between the ages of the DEEX and MBKX cars because it is a bathtub made of steel. See railfanning for more photos that I took of this coal train.

While I was zooming in on a photo, I discovered that I can read the weights. So I got the weights of the three cars discussed so far. I was reminded that the DEEX car is old because the LT WT (empty) weight has faded away. So I found another car where it is readable. The LD LMT on both flat-bottom cars was patched (repainted). One of the issues with aluminum cars is that they can not use flames to heat them when they need to thaw frozen coal. I found the following on the aluminum car: "RADIANT THAW    HEAT ONLY    MAX ALUMINUM    TEMP 250 F."
I recognize 286k as the current gross weight standard for the railroads. (268k was the previous standard, and 315k will be the next standard. [UP; Barken, p21])

I discovered an underpass bridge that still has the C&NW logo on it. Both my overview photo of that train and a Street View catches a coal train on the bridge. In both cases we can see bathtub gondolas in the train.


It is easy to find videos of rotary dumpers in action. In contrast, I have not been able to find a single video of continuous dumping of bottom unload hoppers.


(new window)  This video taught me about the water spray used to clean off the side rail over which the coal was spilled. The comments indicate that this coal customer is installing the first quad car coal dumper. H&P's web site claims a cycle time as fast as 35 seconds or 5,000 tons per hour. A tandem dumper can do 10,000 tons per hour.


The primary advantage of rotary dumpers is that chunks of frozen coal don't plug the unloading bays of the hopper car. [Heyl & Patterson Blog] In fact, Heyl & Patterson sells a hammermill to help breakup frozen coal chunks that were dumped on the grizzly (unloading hopper grate).
(new window)  Just a few seconds of watching it in action shows how the hammermill works.


(new window) (source) This video shows a quad car rotary in action. It looks like they need to add some more water sprinklers to control the dust. At least one dust cloud floated away.


(new window) (source)  This plant has to have an incredible conveyor system to handle the tonnage per hour of two quads alternately dumping.
Richmond Engineering Works also manufactures rotary dumpers. One thing I learned by reading their feature list is that the operator has to make sure there are no hobos still sleeping on a car before it is dumped.

Even though the rotary coupler avoids having to uncouple cars to rotate them, you still have the constant stopping and starting of the train. The maximum speed that the train can be moved is determined by the acceptable forces on the coupler knuckles after the slack runs out. [RailKnowledgeBank] The manufactures of rotary couplers take advantage of the stopping-and-starting by selling car positioning units and hydraulically controlled wheel locks. The car positioner can go back for the next car while a car is being dumped. The positioner uses a big arm that it lowers between the cars to push the cars.
Some positioners are powered by a winch and cables. [RailKnowledgeBank] Some are powered by a lot of electric motors driving pinion gears against a rack.
This shows the arm being lowered (or raised) between the cars.


The same train that had the block of gondola cars carrying pipe also had a block of modern hopper cars. Because I got caught by this train while in traffic, I'm not talking the normal "railfan" angle of this hopper. Consequently you can see the arms underneath that open and close the gates.