This spur through town serves a tanker transloading facility, a chemical plant, Standard Concrete Products and Motiva Enterprises (a distributor of Shell and 76). It looks like some of the industry along the bay has already disappeared.

(new window)
(I don't understand why railfans have so much "just horn" time at the beginning of their videos. You can finally see the train at 2:18. There is a lot of horn blowing because the train is crossing a lot of streets in downtown Tampa. The city wants an exemption for the horn blowing, but it runs down the middle of Polk Street. I don't know if the train can control the traffic lights like the emergency vehicles can in Downers Grove, but there is still a matter of warning the cars that are driving on Polk Street that they might get run over. When I stayed in a hotel in downtown Atlanta, I would wake up in the wee hours of the morning because there was a crossing in an industrial part of town. And the engineer used no judgement as to how long a "long" blast needed to be. He leaned on that horn as if he was in the middle of the country approaching a blind crossing. If they won't give an exemption for a seldom used crossing in the guts of an industrial area, then they can't give one for street running in a downtown area.)


You can tell that it has rolled back just halfway. This bridge could go straight up. That is why the counterweights hang outside of the track girders.
The street running we hear at the beginning of the above video is down Polk Street. Here is a view taken from the Franklin Street crossing looking Westish. On the other side of that parking garage at the end of Polk is the location of the bridge.

Then I turned around and took this view looking Eastish. 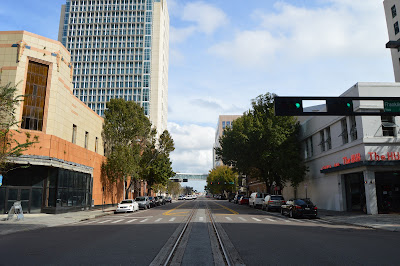 We then walked down Polk to the Marion Street crossing, and I again took pictures looking Westish and... 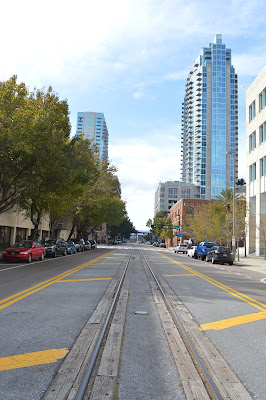 ...Eastish. You can see that it runs several blocks through downtown. It leaves Polk Street at Jefferson Street. 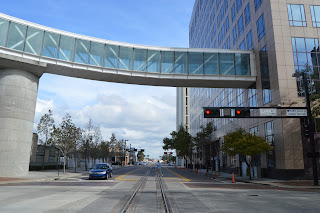 (new window) (source)
Tampa! This is a hard catch! Only 2 trips a week!

And then YouTube will offer you other videos of Tampa street running.  This one shows it runs a lot of red light.s

Posted by Dennis DeBruler at 10:46 AM