I've discussed rotaries for big snows, spreaders for smaller snows, and other snow removal techniques, but the Hocking Valley Scenic Railway is the first time I've seen a big plow up close and personal. Note the hand brake wheel on top is in the middle of the unit. 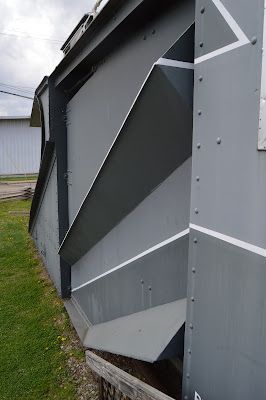 The part in the middle is a "wing" that can be folded out to push the snow further away from the track. 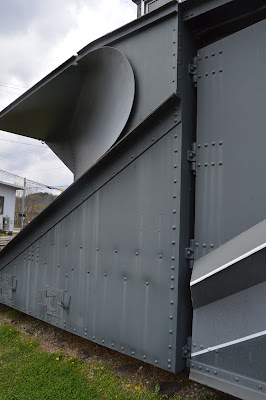 The wings are attached at the front with four hinges. 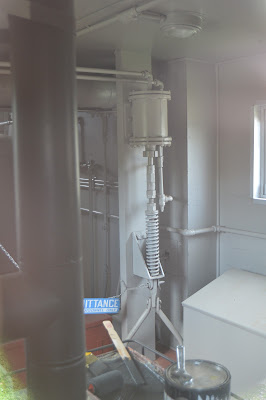 I had a hard time getting this picture of the inside because of the sun's glare off of the window. I was finally able to hide most of the glare with my left hand while I took the picture with my right hand. There were two of these "ram" units. I concentrated on getting the one on the right side since they were identical. I assume it is the ram that pushes the right wing out. Since it has a large diameter, I'm guessing it used compress air instead of hydraulics.

The stuff at the bottom of the picture is paint supplies and an adjustable wrench. It is nice to see that they are actively maintaining this unit. One problem with some museums is that they get equipment, but then they don't have enough volunteers to maintain the equipment and it ends up rotting away anyhow.


Since I was not willing to chop down that power pole, I'm afraid the background of this shot has a lot of clutter.

Update:
The NYC plow must have been a standard design because it appears the CGW had one like it.

Jim Cunningham It's called a snowdozer by the RR


Sometimes even the Midwest has blizzards that the wedge plows can't handled. Especially during the last 1970s. I remember an Amtrak train got stuck between Chicago and Lafayette. On more than one occasion the eastern railroads had to borrow rotary snow plows form the western railroads to open their tracks. In 1978-79, we has so much snow and it stayed below freezing for so long that the piles by our driveway were over our head. To pull out on Main Street, my wife would get out of the car and walk to the street to let me know when the coast was clear. Downers Grove bought a front loader and snow-blower attachment for less than it would have cost to hire a snow removal contractor from Buffalo, NY. Railroads were putting snow in gondolas and hauling them south to sideings where they left them to melt. Chicago was dumping snow on parks, playgrounds, and the river.

This photo and comment confirms that they can extend the wing on one side to shove the snow past an adjacent track.
See the Facebook Group "Railroading in the Snow" for many more photos and videos. For example:

Video of various wedge plows in action. At -2:10 one is plowing some pretty deep snow. (source)

Video of different trains in action  at the end starting at -0:37, a wedge plow pushed by three locomotives gets stuck.

Posted by Dennis DeBruler at 2:50 PM