I learned that the name of the little yard here is Congress Park Yard in the comments on the following derailment that happened on or before 1967.

After rail fanning for a while where BNSF/CB&Q crosses over the IHB, I headed east along the tracks to check out the commuter stations. I was rather surprised to find that Pepperidge Farm was not the only line-side industry left along the Racetrack. When I saw cars on what looked like an industrial lead, I turned around to take some pictures.

BNSF seems to now use the Congress Park Yard for Maintenance of Way storage. 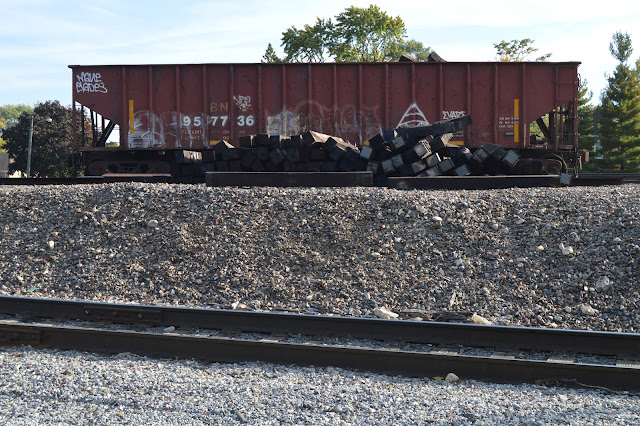 Since it is close to the connection with the IHB, it was once probably used to interchange local freight with the IHB. This Bing map image shows five cars spotted on the industrial spur.

An older image even has the fallen flag of a Burlington Northern car.
Congress Park was an interchange yard with IHB. Back before unit trains and Interstate highways, the major yards in Chicago were hump yards instead of intermodal yards. Interchange yards were important because they were where one railroad would deliver a cut of cars to another railroad.

Also, at one time, CB&Q served 500 industries east of Aurora. So small yards gave the local train a base from which to distribute cars to the various industries in the neighborhood and assemble the cars retrieved from those industries into a cut that they could take back to the railroad's classification yard.

Before the current configuration for Ogden Avenue, there used to be a truss bridge that took Ogden straight over BNSF and IHB. I was shocked to learn that before the truss bridge, Ogden had today's underpass configuration.
Other than the removal of the connector in the northwest quadrant, the yard has about as many tracks as it used to have. But it is now used for car and Maintenance of Way storage.

The derail is protected by a snow removal heater. If it was installed a little to the West, it would protect the road as well as the mainline track.

Update: It looks like BNSF is going to soon loose the business of the Sweetener Supply Corporation that is by this yard. It is planning to move to a new location in Indiana.
David Jordan shared a link with the comment:


Probably posted in July 2019, but I didn't see the Genesee & Wyoming news item until until now. It mentions sugar and related products (corn syrup?) and cellulose woodpulp coming by rail.
* * * * *
Sweetener Supply to Open New Food Ingredients Facility on Toledo, Peoria & Western Railway
Sweetener Supply Corp., a Brookfield, Ill.-based manufacturer and marketer of food-grade ingredients, recently announced it will open a new manufacturing facility on a 15-acre site served by G&W’s Toledo, Peoria & Western Railway (TPW) in White County, Ind.
TPW worked collaboratively with Sweetener Supply and White County for more than two years to bring the project to fruition.
“We are delighted to have earned the trust of Sweetener Supply, helping convince them to locate its new facility along the TPW in Remington,” said TPW President Marty Pohlod. “This success is a great example of OneG&W in action where industrial development, real estate, engineering, TPW operations, marketing/sales and government/industry affairs all contributed to providing a fine site and arrangements to attract Sweetener Supply. We are excited to see construction start and to eventually begin providing service. TPW is a great railroad for industrial development sites because it safely and reliably accesses so many Class I railroads both in the east and west.”
Proximity to Interstate 65, rail service and convenience for the company’s employees were major factors in selecting the location in the Mid-America Commerce Park, said Joe Gardella, president of Sweetener Supply.
“We looked at several states, and White County came with the best offer and logistically made the most sense for our company and customers," Gardella added.
TPW and the county structured a unique transaction to create the 15-acre parcel from railroad- and county-owned property. The parcel was then deeded to Sweetener Supply for construction of its $20 million, 180,000 square-foot facility. Sweetener Supply expects to break ground in 2020 and complete work on the building in mid 2021, after which it will relocate equipment from its Berwyn, Ill., facility. The company expects to be operational by early 2022.
TPW worked with Sweetener Supply on a plan to provide the company with a rail spur to its building to compete with other project sites under consideration around the Midwest that already had rail spurs. The company will receive inbound railcars of sugar and related products, as well as cellulose woodpulp. The woodpulp is processed into an anti-caking material for cheese, baked goods and pet foods among other uses.

Chris Walters I wonder how many carloads they will have.
Jacob Metzger They get around 15 cars a week in Brookfield currently.
David Jordan BNSF covered hoppers are visible at the Brookfield site, so assuming this firm makes no change to its suppliers, bulk sugar coming out of MN or ND should be routed BNSF-Peoria-TPW. I'm wondering if woodpulp is shipped in covered hoppers as well?
Adam Robillard J Rettenmaier in Schoolcraft, MI receives similar wood pulp that arrive in boxcars from mainly CN and CSX origins.
Rettenmaier has 6 indoor boxcar spots and receives 6-12 boxcars of wood pulp a week. They ship an outbound byproduct used as feed in covered hoppers average about 1 a week.
Dean Cunningham Very interesting post David. This speaks well for the rail service the "Sweetener Supply Corp." will receive from the railroad. Has construction of the plant commenced?
David Jordan Dean Cunningham Not yet, but groundbreaking is to take place this year. Operations will commence by early 2022.
Dennis DeBruler So the Racetrack is down to just Pepperidge Farm in Downers Grove between Naperville and Cicero.
https://www.google.com/.../data=!3m1!1e3!4m5!3m4...
I just discovered that Google Map labels the Pepperidge Farm building as also Campbell Soup.
https://www.google.com/.../data=!4m5!3m4...

They evidently handled both liquid and granular sugars. (Note the covered hopper unloading in the building and the pneumatic-unload semi in the right background for the granular action.)
Again, it uses both covered hoppers and tank cars.

This 1993 photo was back when Clyde Yard (Cicero) still handled freight. I started talking about this plant with a railfan when he mentioned he read the Pepperidge Farm is going to close. He said this plant is now served out of Western Ave Yard since Clyde is now an intermodal yard.

Posted by Dennis DeBruler at 1:41 PM