You can tell when a technology is relatively new because several different terms are used for the same thing. In the following photo, note the long orange boom with a platform for a couple of workers on the end. The most common term I have heard for these lisfts is manlift. Unfortunately, that term is rather accurate because of all of the construction photos I have taken (so far, a small sampling), I've seen just three women workers. But I'm going to user worker-lift because it not only is more politically correct, it is more unique. Uniqueness helps later with searches.

I have taken many photos of these lifts because they are now heavily used in construction. You seldom see a ladder anymore. In fact, I've taken so many, where do you begin? The following has motivated me to try to find some of them in my photo folders.

See reservoir for the context of this work.

While walking to downtown Downers Grove to check up on the construction projects I had been following, I noticed a large worker-lift being used for the outside maintenance of a residential unit.
One thing impressive about this lift is that it can work with a large radius. On the way back home, I took some more photos. 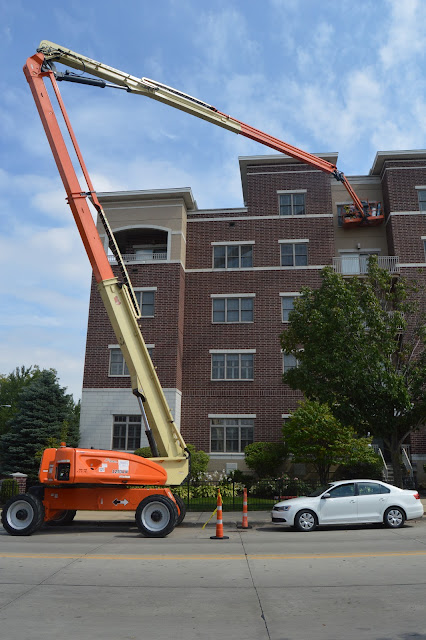 The "chains" that guide the hydraulic hoses show that both booms are extended most, but not all, of their potential length.

This diagram below from JLG's site shows that the hose-control "chain" is fully stretched when the lower boom is at its maximum extension. We can't see the "chain" for the upper boom because it is on the other side of the boom. I realized the "chain" was on the side when I couldn't see it in the view on the right.

The platform can carry 500 lb with no restrictions and 1000 lb with restrictions. I assume the restriction is a reduced radius with a heavier load. I was not able to find any wind speed specifications.
I found a reach chart that confirms the primary restriction for 1000 lbs is the radius. But there is also a restriction concerning back booming.
In their brochure, I found an 1850SJ model that can reach 185' high or 80' out with 500 lb unrestricted.

The axles can be extended from 8' to 12'. I don't know what the up/down arrows indicate. 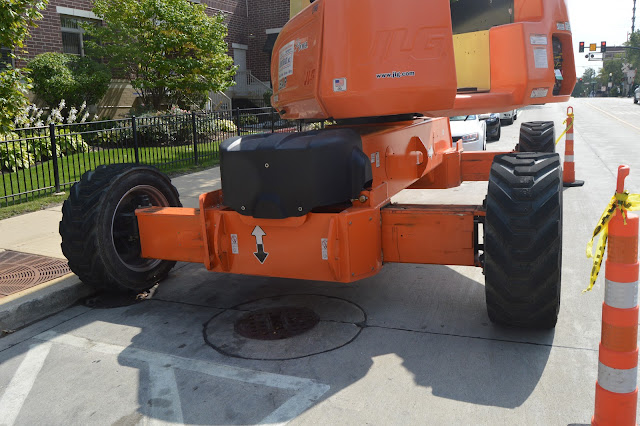 I also don't know what these arrows are for because, according to the specs, the wheelbase is fixed at 12'6". 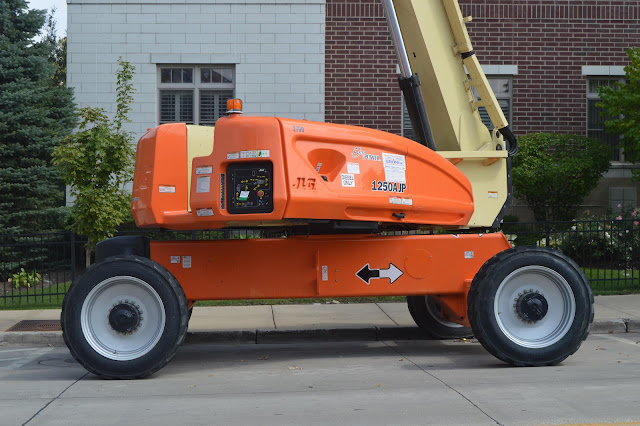 This shows how the degrees of freedom for positioning the platform can be used to fold the unit into a compact configuration for transport.
(new window)


The rest of the trip down. 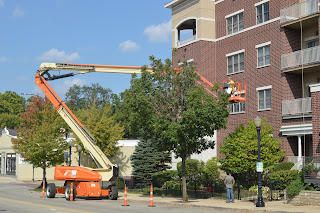 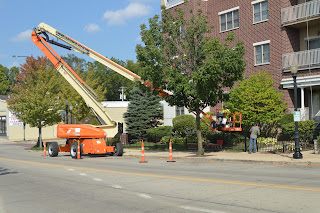 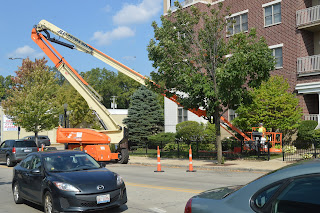 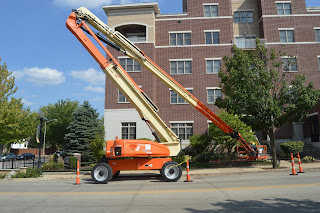 The next day during my walk to downtown, I caught it parked during lunch time.


While I was watching a Terex crane work, I noticed a worker-lift near the corner of the building. (The crane had been lifting equipment and supplies for roof repair.) 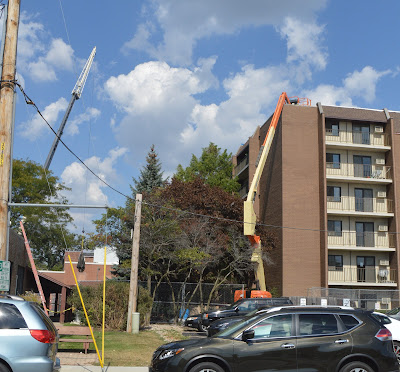 So I walked over there to check out the lift action. 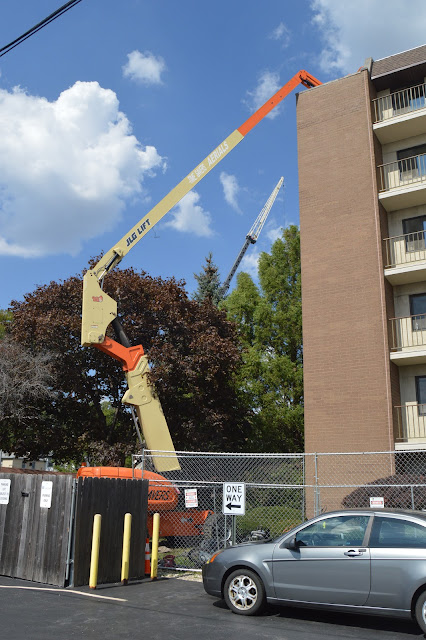 The lower boom has no extension. And they are not using the full capacity of the upper boom to get to the roof a six story building. 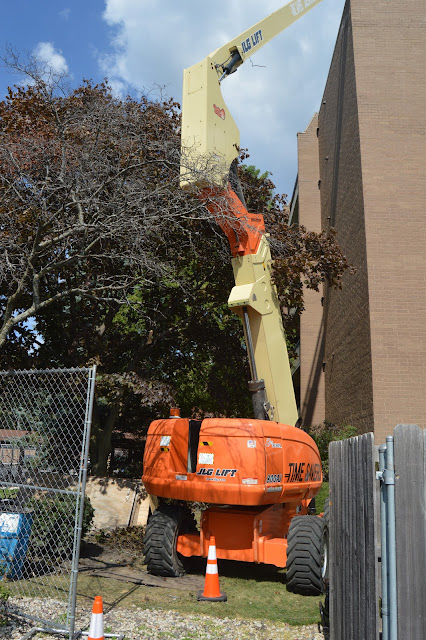 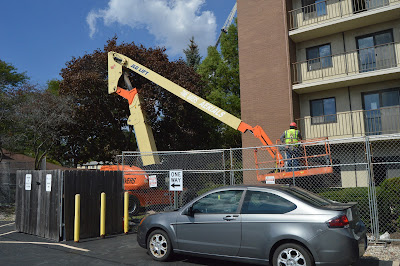 This was evidently the first time the worker used this model because he tried going back down to the ground with the lower boom still raised.
So he goes back up a little, and I caught a sequence of the lower boom being lowered. 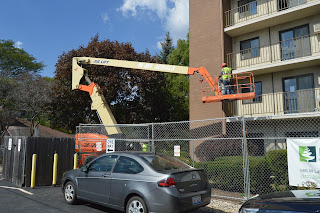 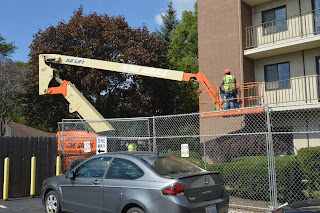 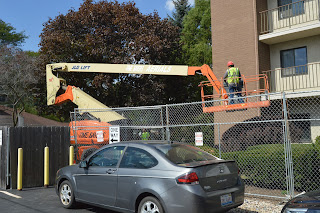 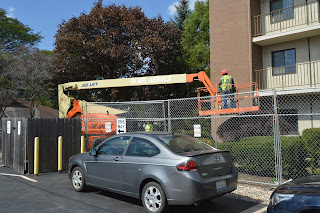 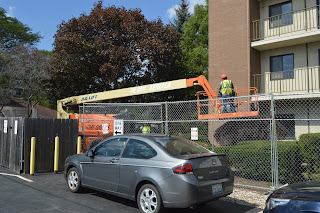 Then he lowers the upper boom so that the platform is on the ground. 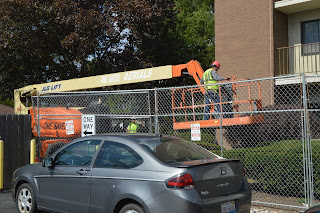 You can see the supplies staged by the fence. 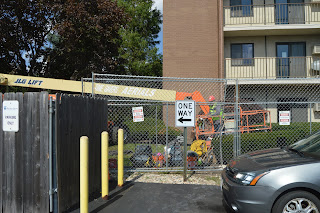 He didn't get out of the platform. There was a helper to fetch what he needed. But in this video, I don't see what was added to the platform.
(new window)


As I go back to my car, the lift has started another trip down and the crane is moving supplies to the roof of another building. 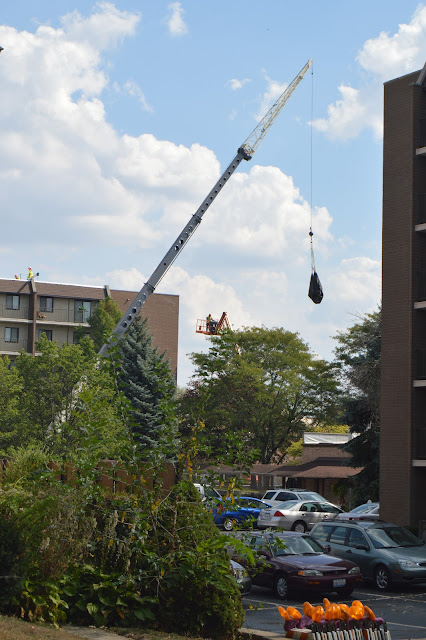 This is one of the two lifts that were used by the erectors of an underground, three-story, precast-concrete parking garage for an apartment building.
Note the concrete slab being held in the air above. This shows the crawler crane that does the precast work and the tower crane that lifts the wood panels on top of the precast garage. 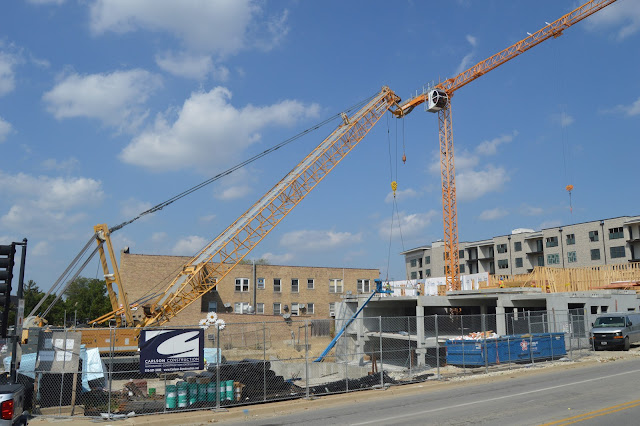 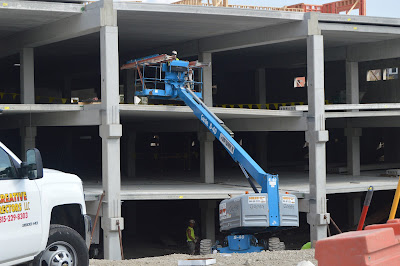 The first lift had already been removed from the site. I caught them setting their last slabs because they used the remaining lift to walk their equipment, such as ladders, up the dirt ramp... 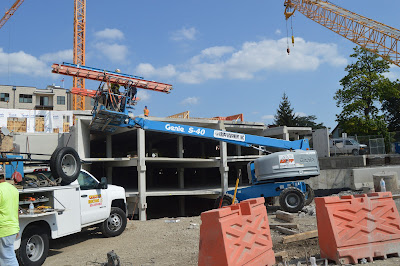 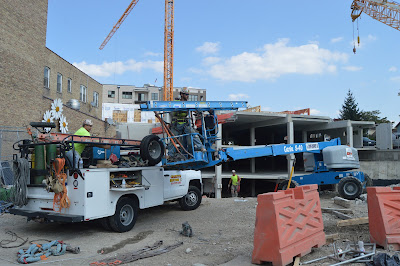 ...so that they could load their equipment onto their truck. These lifts take a lot of labor out of "doing labor."
The next day I happen to catch them hauling this second lift away.

Posted by Dennis DeBruler at 11:11 PM