Manitowoc's 18000 and 21000 was a later solution for achieving the stable base of a ringer crane with the mobility of a crawler crane. Especially when it has a Maxer wagon (the pile of counterweights with its own wheels). The 21000 has eight crawler tracks, two in each corner. Many of these photos were in the above referenced "stinger" post. I moved them to their own post because a 21000 is currently working at the power plant in Romeoville, IL so I should be adding a lot of photos to these notes. My photos of the 21000. While I was there, I took photos related to the management of the coal pile. A 21000 was used in 2011 to build 499' smokestacks for a power plant.

This video provides an overview.


And this is a closeup of the "counterweight wagon" called a "Maxer."

Rail & Highway Heavy Loads posted two photos with the comment: "Anyone know what this is?"
["ballast truck" and "counterweight wagon" are the popular answers.]
Glen Cleary shared

Domenic Casa posted six pictures with the comment: "Oxford ct power plant." It is an "18000 with maxer."  Riley Anderson One of my favorite jobs is installing tube bundles!


Miguel Perez posted six photos with the comment: "M18000 with maxer. Mexico."
Ben StalveyBen and 4 others manage the membership, moderators, settings, and posts for Manitowoc Crane Enthusiasts. Hanging Maxer pretty rare
[I guess "Hanging Maxer" means the back wights don't have wheels. But I did notice the special yellow frame to hold the load until all of the forces were vertical.]

Ben Stalvey posted two photos with the comment: "Throwback Thursday Manitowoc WI style. Nothing like booming straight up a massive 21000....."
Kevin Karner Ben Stalvey How many 21000’s were produced?
Riley Anderson Kevin Karner ALL had 3 of them, but I think only has 2 now.
Berry has 1 in south Texas (old ALL machine)
Beyel has 1 in Florida
TVA has 1
Mammoet has 1
there was 1 overseas at a shipyard I think (it was painted blue)
I think it was only 7 built.
[These photos were taken during a test.]


This provides insight as to how the crane is assembled.
Ruben Calderon posted three photos with the comment: "Moving our Manitowoc 21000 last week....all 8 tracks, swivel, carbody, wide strut frames and upper super structure with the lower counterweights!"

Aaron Payne posted two photos with the comment: "That last 21,000 post had me thinking about 2007. Detroit MI Local 324 fixing to pic 1,000,079.00. Took it out 97 ft. Blast Furnace Rouge Steel"
Benjamin Burnett Big monster had a set of 2250 tracks at each corner. Thing was a beast. Tracked over 50' with 1.2 million pounds on the the hook.
Benjamin Burnett 198 trucks to ship out, if I remember right.... Easily could have been 98 though lol...
Steve Salvatore Benjamin Burnett in what configuration does take 98 loads? Let alone 198?
I sold a 21000 out of my fleet a couple years ago and with 300’ main, 300’ luff, 140’ mast, full Max-er it took 72 loads.
Ryan Abbott Benjamin Burnett +\- 40 loads of counterweight alone?
Steve Salvatore Ryan Abbott 49 loads that were either just cwt or cwt mixed in with other components.
[I've noticed that a hydro crane takes almost as many truckloads as a lattice boom crane because they can carry the boom segments on the same trailer that has counterweights.]
Aaron Payne Steve Salvatore if I remember correctly I believe we had like 75-80 truckloads. A lot of counterweights.


When I read that a 21000 had been assembled at the Will County Power Plant (currently named NRG #18), I made a trip to see what I could see from public land. The advantage of a big crane is that you can at least see the booms.

I added some of my photos to a post by Ben Stalvey asking if a 21000 is being used.
Riley Anderson The new cranes in that capacity class are easier to transport, MUCH easier to assemble, have better load charts and much better ground bearing info and are more mobile. The 21000 is a very old design compared with the 1000 ton cranes of today and sadly it has been drastically outdated.


This is an overview of what you see after you cross Romeo Road (135th Street) from the trail-head parking. On this visit, about half of the coal storage land is being used. The crane is parked in its jackknifed position, as I expected.
And this is after I zoomed in some (70mm and cropped) to get a close up of the plant and crane from the trail. Note the boom of a "little" crane under the inverted-V of the 21000's booms. (The boom attached to the crane's house is the main boom and the other boom is called the luffer jib or simply the luffer.) 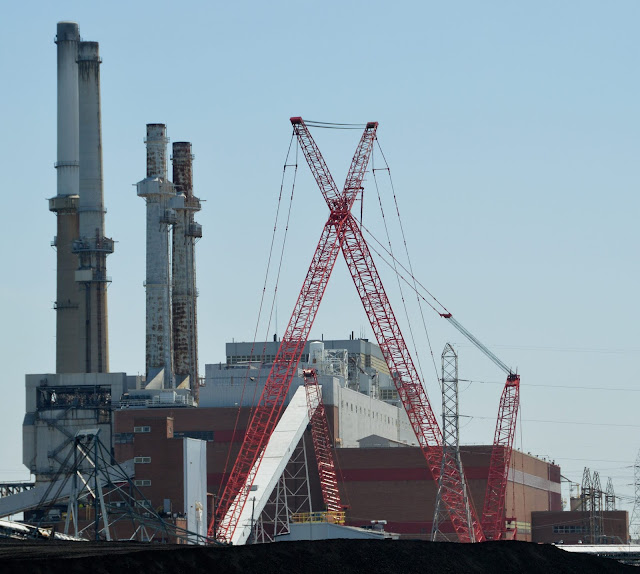 Then I walked west along the trail to get a better angle. 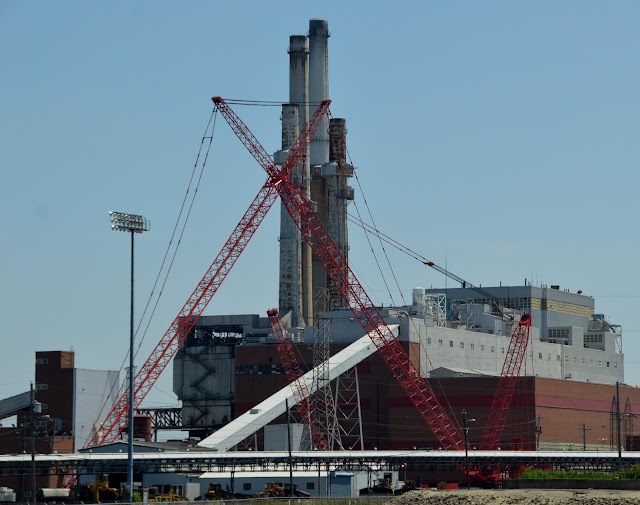 If it wasn't for some landscaping and a conveyor belt, this would have been a good view. The tracks are in the shadows so it is hard to see that the corner of the crane has two crawler tracks. 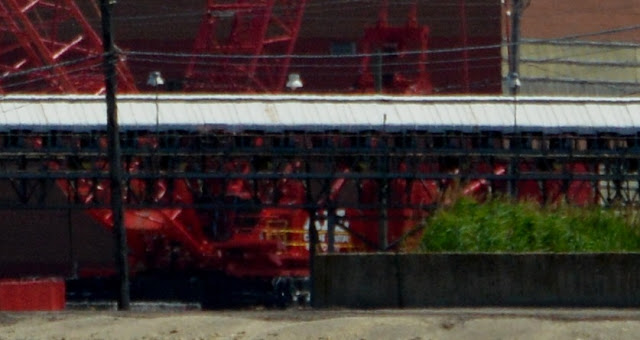 After I left the trail-head parking, I used to road that used to go to the old Romeoville Road Bobtail Bridge to see what I could see from across the canal. Below is the view soon after you cross the BNSF tracks as an overview. Those trees on the left along the canal are a problem. As I went down the access road, I had a hard time finding a gap in those trees. 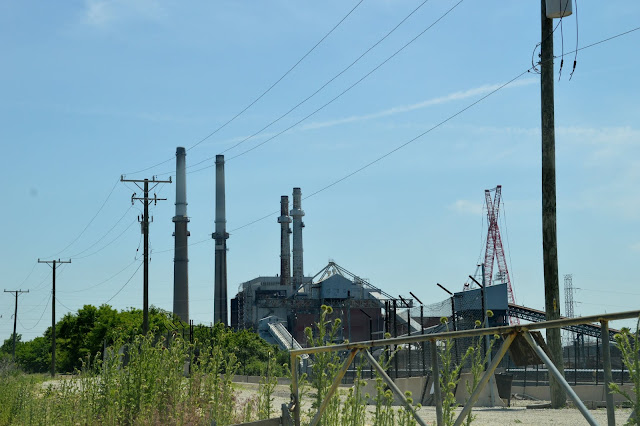 But I did find a gap. 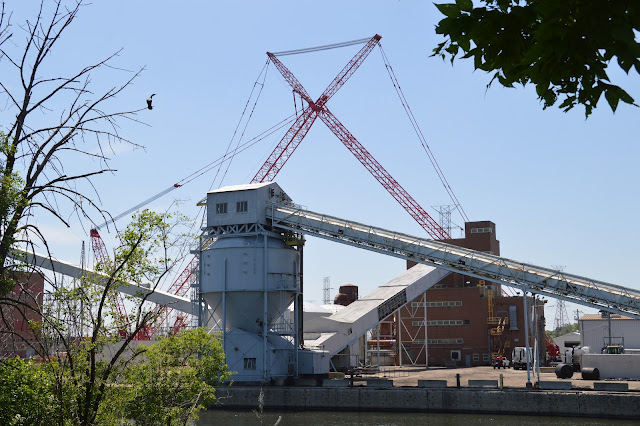 One advantage of a 24mega-pixel digital camera is that I can zoom by cropping the photo. At camera resolution, it looks like there is a dolly with four wheels to hold the luffer jib. (I confirmed that "dolly" is the correct term from the product guide: "Luffing jib attachment includes dolly to support jib point during jackknife erection and lowering.") Cranes with a luffer cannot raise the luffer unless the main boom is almost straight up. This dolly helps hold the weight of the luffer so that the main boom can be lowered to the angle we see. As the main boom lowers, the wheels allow the luffer's tip to move away from the house. 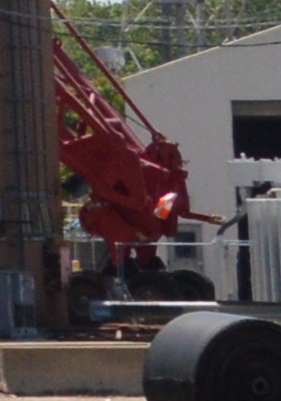 I optically zoomed in (105mm) on the main part of the crane even though a lot of it was skunked by a building. 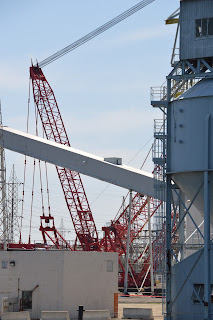 We can see the outside crawler tracks on the front and that it is an ALL rental. 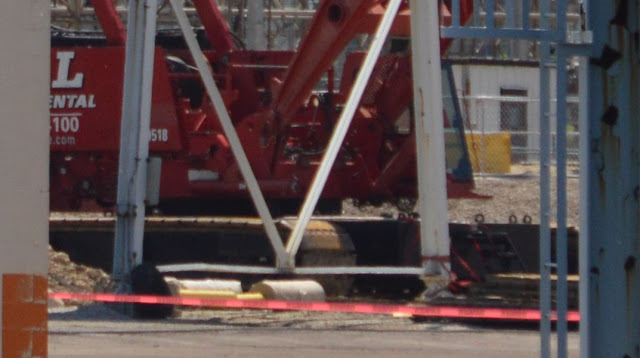 
A couple of weeks later I made another trip to see if I could find some action. The luffer was in the air, but the hook was hanging on the other side of the building. I spent a while watching but nothing happened.
The reason I'm down here by the Chicago Ship & Sanitary Canal was that I passed a westbound BNSF container train on my way here so I went to this crossing to take a video of it.

A BNSF truck was parked by the crossing when I arrived. After the train passed through, he got over the rail, lowered his rail wheels, and took off.

By now you are probably wondering why I've spent so much time talking about a train in some crane notes. Since it was early in the afternoon, I had figured that either the hook was going to stay at its current location for a long time or it would move a few times during the afternoon. But when I turned around, the hook was not only raised, the crane had turned towards its parking position and it was lowering the luffer jib. That means it was quitting for the day!
I had planned to be watching the crane from the west side by the time it was lowering the luffer. But I had to stick with this angle since it was in motion, I think. It was moving so slowly that I could not tell if it was moving by just watching. So I started taking a sequence of photos. It was moving, but way to slow to take a video of the movement. (A MLC300 lowered its luffer, which was considerably longer than its main boom, quickly enough that I did take a video of that action.) I wish Microsoft apps would display the seconds in the file timestamps, but it turns out this action was slow enough that one minute resolutions is almost good enough.


I interrupted my photos of the crane because a tow was going downstream (from Chicago to Joliet).
(new window)


There was a lot of wind noise because there was a lot of wind. It occurred to me that is why the crane was quitting for the day. By the time I turned my attention back to the crane, the tow add moved far enough to be in line with the luffer. If I ignore the fence in the foreground, I got a decent view of the retractable pilothouse as well as the luffer boom being down. I switched from my desktop to my laptop which does have a photo display application that will display seconds.
As I left the BNSF crossing area, I took an overview photo. 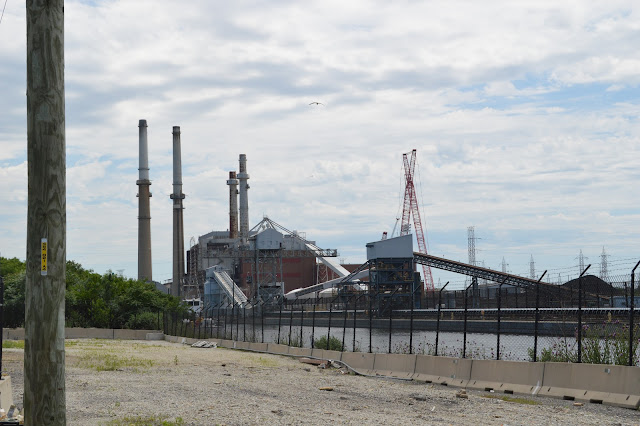 I then went back to the trail-head parking and took photos as I walked along it hoping to find a gap in the trees that aligned with a gap in the buildings. I did find this. This was taken at the full 200mm zoom of my lens. 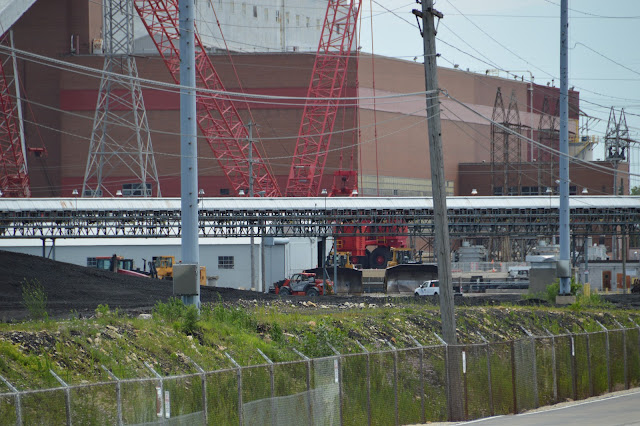 I still can't see the top of the primary counterweights. But I can see that it has a Maxer wagon. I also caught that the dozers for managing the coal pile have BIG blades.

I walked as far west as I can go on the trail and still see the plant to get the best angle I could of the inverted-V to show how far the main boom is lowered. 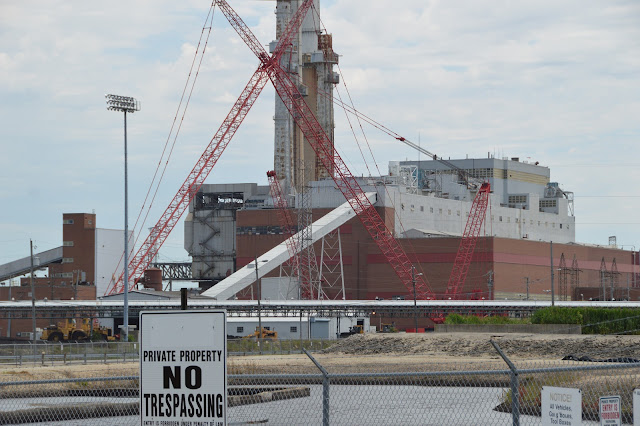 Walking back, I found another gap worthy of a 200mm closeup. You can clearly see the two front tracks and part of the outside rear track. And this view shows more of the Maxer. 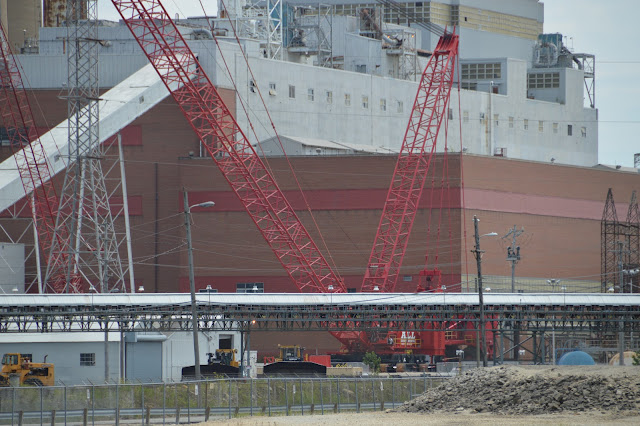 I do plan to make more trips. It should be easy to catch the boom in the air from the trail.


Years ago, I read an article saying this plant would quit burning coal. They were going to close the smaller units and convert a big unit to gas. The article said about 50 workers would be laid off because about half of the current staff manages the coal storage.

A while after reading that article, I made a trip to take a photo with an empty coal pile. But the pile was full to the street! I haven't seen it that full since then, but they still maintain a coal pile. I noticed that the current satellite image is of the correct age to catch the full pile.

But the purpose of this section is to catch the scrappers that were working when I took photos of the 21000 on Jun 7, 2019.
I've noticed that many contractors now use a big articulated-steer agriculture tractor instead of a dozer to pull scrappers. Here they are loading the scrappers on the top of the pile 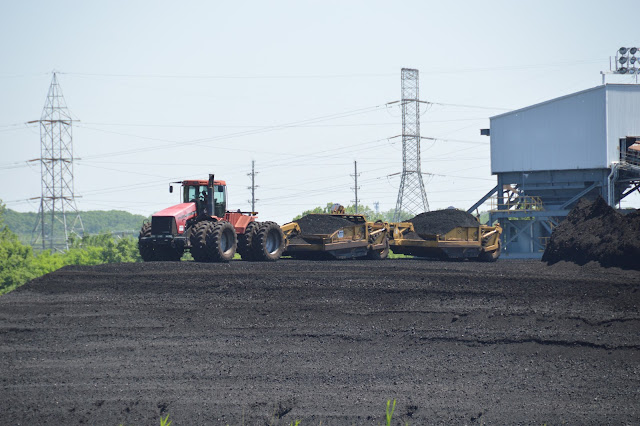 Then he is dumping the coal closer to the street so they are expanding the pile. 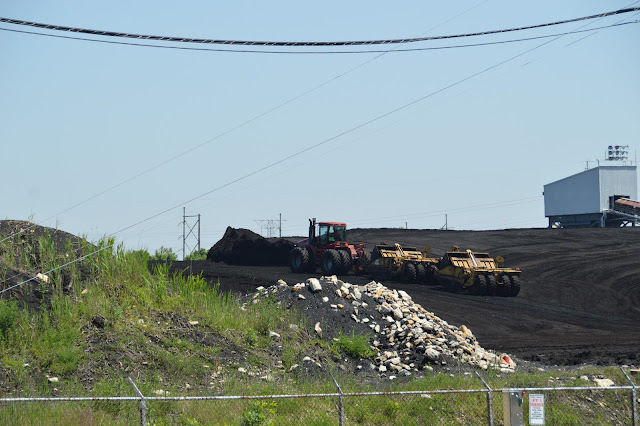 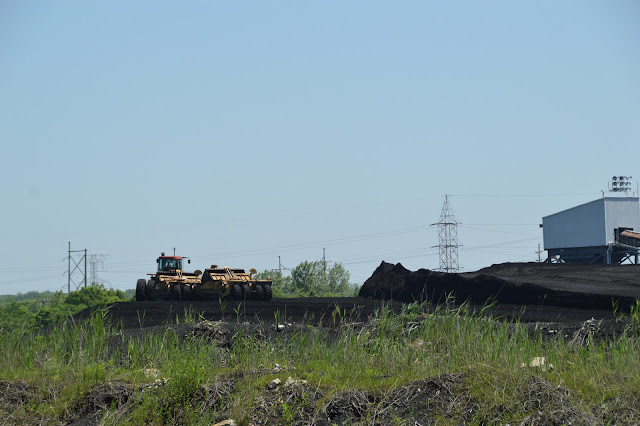 Posted by Dennis DeBruler at 7:36 AM