While researching the Abt Trunion Bascule Bridge, I found this still used 1929 Scherzer rolling bridge on a satellite map.

Update: Mike LaCourse posted a couple of pictures with the comment "The old GT line crossing the Black River in Port Huron, Mi."


Mike LaCourse posted four pictures of a train coming across with the comment: "GT 4629 coming from Domtar Paper Co, crossing the Black River in Port Huron, MI. Looks like a redid gp9? with a different cab." Jonathon Leese added: "GP9R. GTW rebuilt around 30 of them in the early 90's in Battle Creek." 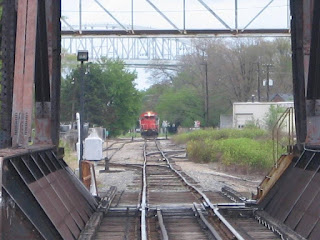 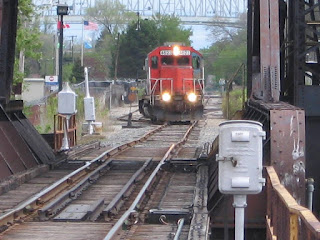 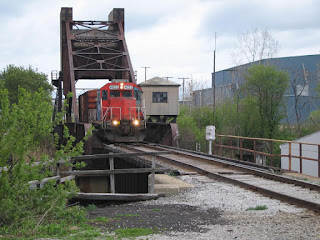 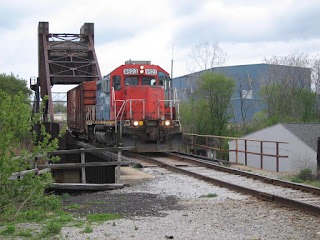 A Port Huron index for David Cenci has a 2010 photo with the comment: "GTW 4918 leads the "HR Job" east across Water St, and across the bascule bridge over the Black River" Another photo on page 5 of his index with the comment: "GTW job L504, with the GTW 4915 as power, waits for the conductor to get back on board after lowering the GTW's Black River drawn bridge at Water St." A 2015 picture with the bridge in the up position in the background.

Video of it being lowered, a train crossing, then raised. I normally ignore videos taken by cell phones with a vertical format. But in this case, vertical is almost appropriate for the bridge. It looks like someone walks across the bridge to inspect it. It must be a low bridge because the boats that passed after it was raised again did not have sailing masts.

Update: Sean Kelleher posted five photos to a public group with the bridge in the open position.

Posted by Dennis DeBruler at 2:48 PM