This was Manitowoc's largest crane. It was unveiled on 9/19/2009. The ring turntable is carried on a frame that uses four crawler tracks. They made two of them before they moved crawler production from WI to PA. They did not move the capability to make any more 31000s.

Testing the crane has more photos

A photo album of its first job, the Atlantic stadium. (A permanent link in case the album link goes away.) It took 130 truck loads to move it out.

(Update: A Science Channel episode on the building of the stadium. They were supposed to show another episode of Mega Machines on the 31000 itself the same night. But they didn't.)

It is currently one of the cranes helping to build the new Falcon Stadium. There also are two Liebherr 11000s in that bowl. Liebherr makes larger cranes, 13000, but these 11000s are no toys. The question was asked in a later posting "why did they need the 13000 if they already had two big cranes?" One answer said that there were some roof trusses that needed all three cranes to lift. But the two 11000s did set most of the time while the 13000 worked continuously, including lifting a man cage.

The comments on the above posting contain lots of photos of the new Atlantic Falcon Stadium construction. I include the following one because it is a closeup of the four-track transport platform. But the comments claiming this picture is in Atlanta have to be wrong. This has to be the Korean crane because it is building a plant instead of a stadium.

Ben Stalvey posted two photos with the comment: "It's Manitowocs Mega Drum for the massive 31000."

This is probably not a 31000, but it is certainly a big ring crane.

2013 For Sale for $22m. There are a lot of nice pictures of it working at a refinery. And some of it disassembled. I wonder if this is the one that went to Korea.
An animation of how it is assembled. Unfortunately, it doesn't show them coming off a truck trailer so I still don't have a good feel for what size loads are being carried on the highway. It obviously has a lot of hydraulic rams that are only used just for assembly.

The 31000 is done helping to build the new Atlanta Falcons stadium, so we will probably be seeing pictures of it being dismantled, starting with its tip. It takes 130 truck loads to haul the crane. (Update: Ray Little It took 138 yo get it out of the Falcons Stadium, mostly permitted loads too. (source))

But first, some context. Here is a video about the trusses it raised for the new Atlantic Falcon's stadium. It makes me glad that I did not work in an industry that started each day with a "hay-ra-ra be safe" meeting. I hate meetings where everyone already knows what is being said. Where you can practically predict the next platitude that is coming out of the guys mouth. This time-lapse video is more interesting.

Tony Reis posted six photos with the comment: "She's coming apart." It will take 120 truckloads to haul the crane to the storage yard. The booms come apart in lengths that fit on regular length flatbed trucks.  And each counterweight is a smallish, albeit heavy, truckload. It looks like the parts for the booms and the counterweights are on their way.


Tony Reis posted 13 photos with the comment: "About to wrap it up," The yellow cranes in the stadium are no toys.
Tony Reis 15 shifts and over 130 loads it is done!


Brandon Storie has an album of 235 photos of the 31000's first job from assembly, to building, to disassembly. One tidbit I picked up from the picture comments is that the ring on the crawler platform is 40 feet. I include some overviews below to provide some context.


This photo sequence posted by Ray Little shows some different pieces and how they fit on a flatbed trailer.

The 31000 in Korea must have done its job and now it is for sale. I'm including 18 of the 27 images because I'm not sure the link is permanent. And because it shows it was building a plant and not a stadium.


David Kinder posted seven photos. According to the comments, this is the one that was in South Korea or Vietnam. It is now in pieces in a Texas yard and for sale for $22 million. I think the other one that was built is still in pieces in an Atlanta yard. Like the Airbus 380, companies kept building their product line bigger until they built them too big to be economical.

Ben Stalvey posted two photos with the comment: "Chunjos 31000 I had received these pictures sometime ago."
Ben StalveyGroup Admin For those unfamiliar with the 31000. It's Manitowocs largest crane ever made lift capacity of 2,535. Only 2 have ever been made. 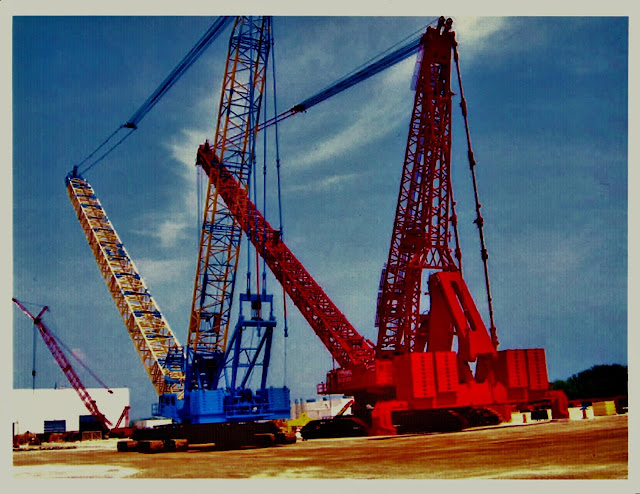 Roger Krueger posted
Someone was interested in seeing the last 21000 next to the 31000.

(new window, you have to use this link. I left the embedded code for the picture.) Test render with Octane


Ray Little posted 30 photos of the Atlanta disassembly and a link to a video about the 31000.

An article that talks about this and other large cranes.

Ben Stalvey posted six photos. The posting has a lot of interesting comments so it is worth clicking the link and seeing if you can see it in a closed group.

An announcement of Science Channel shows on the 31000 and its use has some photos in the comments.

A close-up video that I think has the other 31000 in the test yard. He pans by the counterweights and other 31000, then spends too much time on a face. But you can pause the pan. (source)

Lots of photos while it was being tested

TruckTrend article describes the two Cummins engines and the hydraulics and includes 6 photos.

Brandon Storie shared an album of 172 photos of a tour of the Manatowoc, WI factory when the parts for a 31000 were still in the yard.

Brandon Storie posted 23 photos of the cranes working at various sites starting with the test yard..

A video of photos that include people so you can get a feel for the scale of the thing.

Posted by Dennis DeBruler at 3:57 PM