The yard has gone through a few stages of evolution.

The Cicero Yard must have been built by 1915 because by then this yard was a yard to serve local freight trains and for interchange and to service the commuter train locomotives.

The following aerial photo was obviously taken after the above 1938 aerial because it has been rebuilt as a freight house service.


Western Avenue had some long tracks. Those tracks are still used today to interchange trains between BNSF and NS.
It also had a locomotive servicing facility that handled the commuter trains.

Now it is just an interchange yard. A 2000 Global Earth image shows the long freight house has been replaced by a trailer storage lot. In 2000, there are still freight cars parked by the short building in the northwest corner of the yard. That shorter building is still present in a 2019 satellite image.
If you access the above Satellite link, it focuses on the west end of this excerpt to better correspond with  the 1938 view. But the excerpt continues all the way to Racine Avenue to show that the yard has some long tracks to hold entire trains that are running between east and west destinations using NS and BNSF.


In fact, there were two westbound trains setting in the yard the day I accessed the satellite images. At the bottom left are two engines for an empty coal train. Note the two white tank cars on the right. Then follow that train to the left and you can see the red buffer car and the two engines for that oil or ethanol train. As you can see from Mark's photo, they don't waste time changing locomotives. The NS engines will "run through" and pull the train on BNSF tracks with BNSF crews. Since BNSF engines will also run through onto NS tracks, engine usage is kept track of and one railroad reimburses the other if there is an imbalance.

I don't take the BNSF commuter too often, but most of the time when I take it I will pass a long train setting on these tracks waiting for a crew from the other railroad.

While I was taking pictures of the Canal Street RR Bridge, I caught a Norfolk Southern eastbound oil train with BNSF engines that would have been coming from Western Ave. Yard. This is one of several pictures I took. It shows the three engines, the buffer car, and the first tank car. If you want more pictures and details such as the engine numbers and models, see Train Watching.

As is normal, Metra provides extra train services on several of its routes to accommodate the large crowds to and from Chicago's annual St. Patrick's Parade in the Loop. Here, something not usually seen on a Saturday, a 1:35 pm outbound express to Downers Grove (and all stops beyond to Aurora) races through Western Avenue, passing two westbound empty oil trains waiting for crews to forward them toward North Dakota's Bakken Oil Field. With St. Patricks Day imminent, can spring be far behind?


Mark Hinsdale posted three photos with a comment that confirms this yard is used to interchange run-through trains between BNSF and NS.


"Like Old Times..."
... with "old times" being around 2013 and 2014! During the crude oil boom on BNSF, the long tracks stretching between Halsted Street and Western Avenue in Chicago that BNSF and Norfolk Southern use to interchange trains filled up quickly and often. Not so much, today, but this afternoon, both an empty coal train off Canadian National and NS to BNSF Train 33G pulled up to a crew change stop at Western Avenue's Metra Station, with Amtrak #5, the "California Zephyr," making an on time appearance as well.

While riding a BNSF commuter train to Union Station, I noticed a coal train waiting for interchange with the NS. Fortunately, it was long enough that I was able to get my camera out of its case before we got to the engines. I grabbed some shots because coal and oil trains have become rather rare on the Racetrack. (They were rather common when I started railfanning in 2014.) The green tinge is because of the commuter car window and the blur is because the commuter train had not yet slowed down for the curve to the north. I was setting high enough that I could see enough of the load to verify that it was hauling coal and not petcoke.     #5996: ES44AC built in 2006    #9346: SD70ACe built in 2006 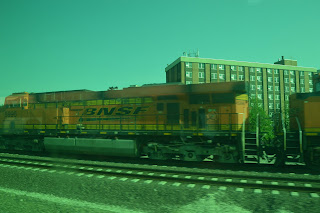 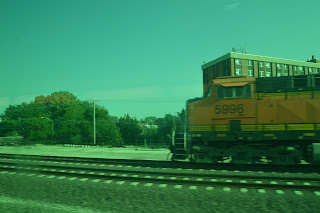 In a scene set 40 or more years apart, Burlington E Units get their occasional washing on the near west side of Chicago near 16th and Morgan. I do not know the date of the E5 photo or to whom to credit. In October 1985 I took the color photos of BN 9904 E9A (formerly CB&Q 9977 built as an E8 in September, 1953). The man washing the nose of 9904 was Paul Dinovo, who graciously let me hang out during the mid-morning as the most of the entire fleet of BN commuter trains were going through the washer that day. 10 years later, 9904 would become IC 100.

Doug Plummer The old Halsted St train wash.
Joe Novak That warehouse building is still there as condos/apartments.
Here is another photo of 9904 going through the same wash rack that was in place 45+ years earlier.

Posted by Dennis DeBruler at 5:26 PM