(see below for satellite images)

Clyde Yard is BNSF/BN/CB&Q's big yard in Cicero, IL. I have driven past it, but they have put up a fence around it and posted the parking lot as No Trespassing. Judging from the satellite image below, I could try walking on Laramie Ave. bridge and get shots of the east side. But all I would get is shots of yet another intermodal yard. The satellite image is much more interesting. In fact, I see there still exists a 4-stall roundhouse! So I also got a closeup of the engine servicing facilities. A 1938 aerial photo indicates the round house used to be 180-degrees.


Marty Bernard posted two photos with the comment: "Two CB&Q Gems from Roger Puta's Reject Box
These aged slides needed considerable coxing. I doubt either were very projectable. The captions are Roger's."
Marty Bernard shared
Timothy Leppert I remember turning locomotives on that table when I first hired out at 18. You can put 3 of the those SW's on the table at one time.....The foot-boards hung off the end, but cleared the rails.


The following screenshots are from a video posted on that page with the comment: "While you were sleeping. .... we were spinning motors on our 100+ year old turntable!"


I was raised crossed the street (Ogden Ave) from the CB&Q Clyde Yard in Cicero, IL and used to sit and look out the front window of my my mom's tavern and watch the old steam engines work the yard. I have some vary rare photo's of that time period. That's me back in 1949 with my mom, we were headed to Navy Pier to see the Chicago RR Fair.

Timothy Leppert Is that Laramie Av bridge?
George Panattoni Yup! Laramie and Ogden Aves. The state bought my mom's tavern to build the Cicero Centennial Bridge in 1956. She had owned the tavern since 1936. Her tavern was called "Over the Hump" named for the bridge, later the "Q" did build a Hump Yard and people get confused, but the "Hump" was built long after the Laramie Ave bridge was torn down.🙂


These are a couple of several photos of the west throat of the yard that I took when I visited LaVergne. 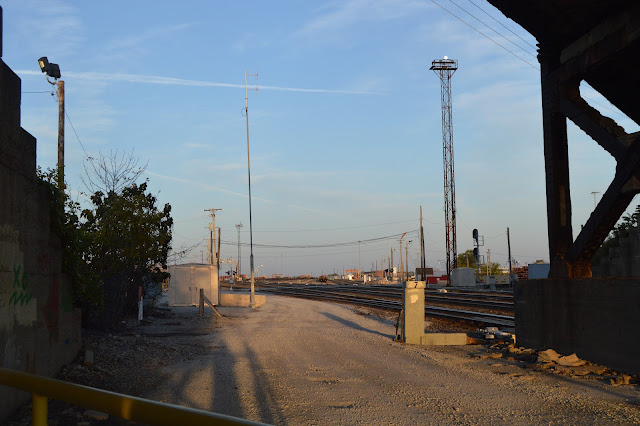 Three of the photos posted by Nathan Leonard.

Eddie posted a 1985 picture looking east from the Laramie overpass.

A video of the hump yard in action. As the two tank cars go down, you can see container cars in the background. But then the background trains becomes boxcars. I spotted transfer engines from Conrail and GT. I could not figure out what the blue engine was. Is it a GM demonstrator? At -1:37 you see cars rolling to their position on multiple classification tracks at the same time.

Chuck Zeller took a photo of some PC and Conrail locos in Clyde Yard, but he caught a yard tower and a bunch of cabooses in the background.

Art Gross Flickr links of 1994 photos taken from Laramie Avenue overpass looking East and West. His comment: "A few years after this shot, BNSF closed the hump and removed most of the classification tracks from the east end of the yard, the Ogden Ave. bridge (in the distance) also came down making for a substantially different view."

Art Gross Flickr 1997 Photo of a CN freight with DW&P SD40 5906 on point. I had just learned from Arturo in a series of comments (CN train pulling out of Clyde heading south on BRC tracks to Clearing Yard) the day before that CN had haulage rights over BNSF to access Chicago directly.

Donald Haskel caught an 1965 overview of the hump and other facilities.
Dennis DeBruler So much history. Not only the hump and its tower; but refers; a tank car with a frame; running boards; and boxcars with a railroad name, slogan and/or logo on them.
Dennis DeBruler This must have been taken from the Laramie overpass looking west. The smokestack on the left was a little east of the roundhouse.

Posted by Dennis DeBruler at 11:54 PM