There are three nuclear power plants along the Missouri river. The one at Brownville was already preparing for possible shutdown.

This video explains that Shell Creek is a problem. The levees along the river have been recently rebuilt and are expected to hold.
(new window) I could not find a date for this video. But I accessed it before 3/16/19.


The Cooper Nuclear Station near Brownville, NE, is being shut down because the Missouri River is expected to have a record breaking flood as the snow pack in the Northern Plain states continues to melt with the ground still frozen and ice jams on the rivers. In fact, the above video explains that the river may top the Federal levees on both sides of the river in Brownville. (3/24/19 Update: Brownville did set a new record. 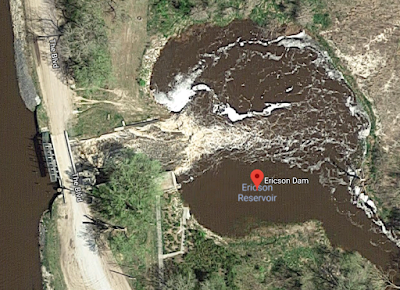 Satellite
The video's comments include: "Meanwhile, Ericson Dam in north-central Nebraska is at high risk of failing as the Cedar River continues to rise, according to a report by the National Weather Service."

The video also mentioned that a farmer was killed. I've read that he was driving to save several stranded cars, but a bridge collapsed when he drove his tractor over it.

Spencer Dam is never going to generate hydro power again. And the 10' or 12', depending on source, wall of water unleashed by the broken dam took out a popular trail bridge.

The video also mentioned that the release of the Gavins Dam was quadrupled to 90,000 cfs.
It has a powerhouse. I learned from the Oroville Dam disaster that a hydro power plant needs to shutdown if the downstream levels get too high. The fact that the water released through the gates will not make any electricity is the least of their concerns because most of the dam is an earth embankment.
I have not seen any reports of transmission lines being blow down by the bomb cyclone. On the other hand, the Chicago Tribune never mentioned the Spencer Dam failure. After I read that the Omaha newspapers also didn't report it, then I wasn't as mad at the Chicago Tribune. However, recently they have been having a report on a different aspect of the flooding about every day.

Posted by Dennis DeBruler at 5:59 PM