(Satellite)
You seldom see pictures of this elevated connection let alone something using it. And this is the second connection for which I have seen a name. (The first one was the Jefferson Connection between BNSF/CB&Q and Metra/Pennsy.)

When I read the the high-speed rail plan between Chicago and St. Louis specifies the use of the former-Rock Island route between Joliet and Chicago, I asked what the speed limit of this connector is. (Currently the Amtrak trains use the Alton route between St. Louis and Joliet and continue on that route to Union Station.) The answer was that the speed limit is 10mph but the plan includes replacing this connector with a connector that would allow 25mph.

This gives me an excuse to revisit my Joliet folders to find pictures of this connector.

Here we have the Rock Island over pass, Union Depot Tower and Union Depot framed by the connector. As you can see, the connector has not had a lot of maintenance lately. If it is supposed to be replaced according to the high-speed rail plan, that would explain why Metra has been doing minimal maintenance on it. 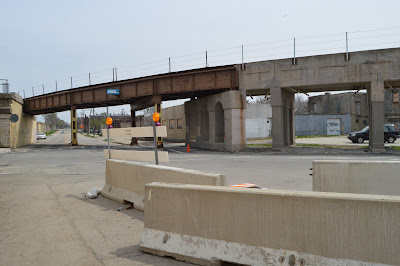 This view is taken from the pedestrian underpass under the UP/MoPac/GM&O/Alton tracks looking east. It appears Rock Island built the part over Washington Street and GM&O built the part over York Avenue. I had never noticed that Metra sign before. Obviously the RI engineers preferred to build with steel whereas the GM&O engineers preferred concrete. 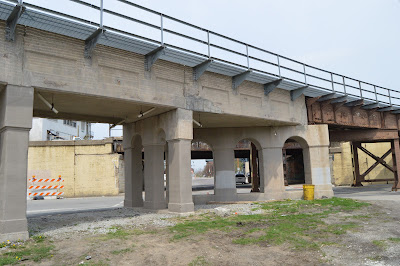 The view is south of the connector looking north and focuses on the GM&O part but also shows how the connector changes materials. The walkway is obviously a rather recent addition. 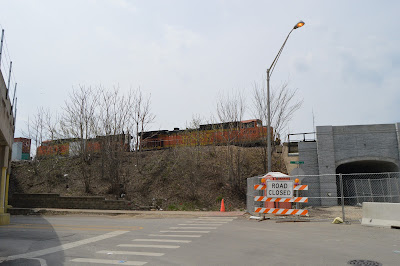 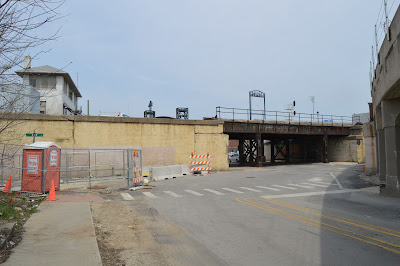 I am now down close to where the connector joins the UP/GM&O embankment looking north at the tower and the Rock Island overpass. I captured the curvature of the connector on the right.
Most railfan photos from Union Depot will be looking south along the UP+BNSF route or east along the Metra+CSX+IAIS route and won't catch the connector in the southeast quadrant. But I was taking a picture of the new and old signals and did catch the west end of the connector. It must still be used because there is a signal for it near the middle of the background. 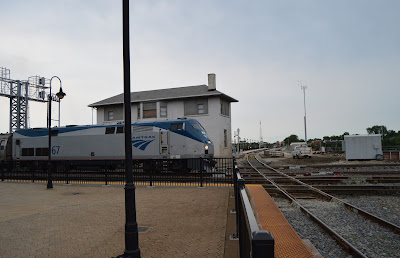 In this wide angle looking east, I catch the rest of the connector. Below I zoom in on the photo. You can see the new walkway and part of the steel girder on the right.

If you compare the photo with the satellite image, you can also see that the connection with the Metra track has changed. Since they have moved the Metra-RI platform east of the diamond, they had to extend the connector to clear a commuter train setting at the platform. Since there used to be four tracks through here, there was plenty of room for the new track.

In this photo of the new diamond that had been recently installed, you can catch a glimpse of a concrete girder of the connector. In this closeup of the construction activity down by the old signal bridge, you can see the connector track join the eastern UP/GM&O track. Later, I got about the same view when I took a photo of a northbound (timecard eastbound) train to get a time stamp. 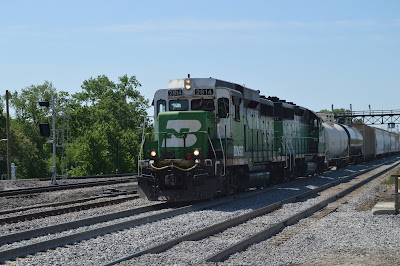 As I got closeups of the two Fallen Flags, you can see parts... 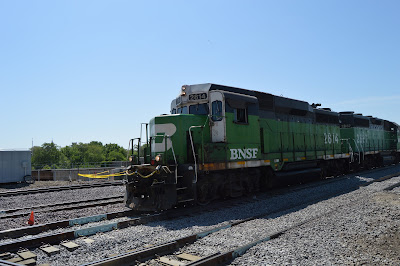 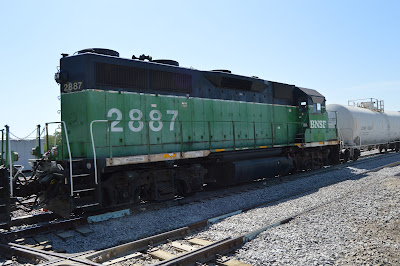 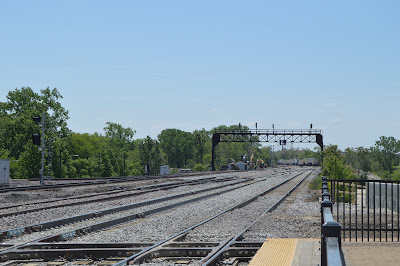 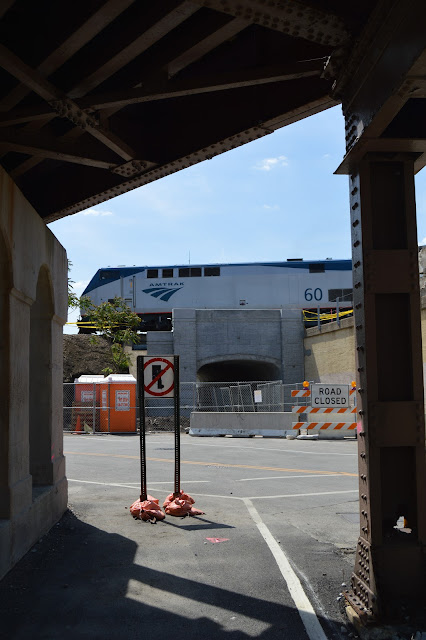 
Art Gross Flickr of a 1972 photo of a Rock Island Alco C415 on the connector pulling a Monon boxcar. The foreground has the diamonds of the crossing. (source)
Posted by Dennis DeBruler at 9:15 PM