Towns bribing a company for a factory is not new

The astute reader will have noticed that I generally deal with just the technology aspect of industrial history. I deliberately avoid other topics such as greed (management, workers (union), shareholders), politics, regulations, deaths, and lawsuits. But a non-technology topic has tripped my "two mentions in one day" rule.

The top article of the business section of the May 21, 2017, Chicago Tribune was headlined "cutting workforce, but poised for tax break." Greg Trotter wrote that Conagra Brands won $10.5 million in state tax breaks to induce them to move their headquarters from Omaha, NE to Chicago. Conagra did move and now about 500 workers are in their new headquarters in the Merchandise Mart. But then they sold its private-label business for about $2.7 billion, shedding a Downers Grove office and a South Beloit cookie plant. Google has already removed the Downers Grove location, but Bing still has it, 3250 Lacey Road. According to Google, other food companies now use that facility, and hopefully many of the former Conagra  worker --- Hillshire Brands Innovation Center and Hearthside Food Solutions. Or were Hillshire and Hearthside Conaga brands? That sale cut about 600 Illinois jobs according to information obtained by the Chicago Tribune under the state's Freedom of Information Act. The company that bought the facilities, Treehouse Foods, says there have been no layoffs. But the state legislatures are rewriting the tax-incentive program to consider the total number of workers in Illinois, not just new workers in one city. EDGE (Economic Development for a Growing Economy) is now dead, but they are working on a THRIVE (Transforming, Helping, and Reviving Illinois' Versatile Economy) program. But Todd Maisch, president and CEO of the Illinois Chamber of Commerce thinks the law should provide the flexibility of trading blue-collar jobs for white-collar jobs, especially if it has the prestige of bringing another headquarters to Illinois. But it should also emphasize bringing jobs to "particularly needy parts of the state." 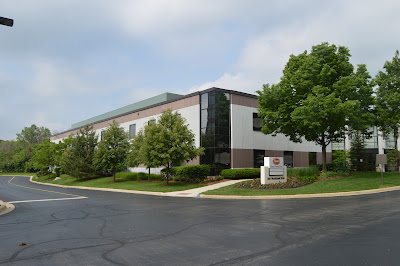 It does appear that someone is trying to make Chicagoland the "Silicon Valley" of foodies. Next door is a building with the sign "Tyson Foods, Inc." And they have added "INNOVATION CENTER" to the sign. McDonalds has its headquarters campus in Oakbrook, IL, but they are moving to downtown Chicago. The Kraft part of Kraft-Heinz still has its headquarters in Chicago.

I made a copy of McDonald's campus satellite image since it will be disappearing. I wonder if they will change the street names when the buildings get new tenants. The good news is that Chicago Public Schools has more need for property tax than Oakbrook does for their schools.

I have already discussed the empty auto manufacturing plant in Normal, IL.

But today's government subsidies are small compared to the extortion of small communities that was practiced by labor intensive companies such as the Brown Shoe Company. A comment posted by Lost Illinois Manufacturing begins:

I have taken pictures of an International Shoe Co. factory in Olney, IL. The posting provides the following three photos of Brown Shoe plants.


I think I found the answer - - - - - - - - - - - - - - - - - - - - - - - - - - - - - - - - - - - - - - - - - - - - - - - - - - - - - - - - - - - - -
"During the 1920's, citizens' committees were formed in a number of cities including Chicago, Cleveland, Detroit, and San Francisco. Generally they were formed by employers' associations in order to raise funds, and to secure the cooperation of the nonemploying public, for an antiunion campaign. . . . . In Chicago, Cleveland, and San Francisco, citizens' committees, organized by employers' associations, raised millions of dollars to wage a campaign to eliminate the building unions. In such a campaign, building contractors, real-estate interests, and bankers were an important element in enforcing a buyers' and credit boycott against union employers in the industry (the citizens' committee is a device for organizing business groups to carry out a campaign against labor organization and the economic program of unions. It is usually a temporary organization, born out of the fear that labor organizations may have adverse effects upon local business, payrolls, and employment. Through such fear it is able to enlist the support of real-estate owners, professional persons, small retailers, farmers, and other nonemploying groups. Often economic pressure in the form of a threat by an employer or employers to move the business to another locality causes local business groups to organize and exert pressure upon local officials and public opinion in order to break a strike or to eliminate labor unions). . . . As the personnel manager of the Goodyear plant in Gadsden, Alabama, has explained, it is much easier to organize community sentiment in favor of a company in a small community than in a large one. That is true because a small community is so dependent on the company's payroll. . . . The effectiveness of the threat to move lies not only in putting economic pressure upon small, independent businessmen to oppose the union but in forcing the government officials to side with the company. As the experience of the Remington-Rand Corporation in Syracuse and Ilion, New York, during its 1936 strike indicates, it is easier for a company to sway public officials in small cities than in large ones. . . . Under demand from the Citizens' Committee group to cooperate or resign, the mayor and the chief of police of Ilion were forced to appoint and fully equip about 300 special deputies, after which "law and order" broke loose in Ilion. The mayor explained that, as one of the largest property owners in Ilion, he was afraid of the Citizens' Committee, which included the bankers, because "he could easily be a ruined man and have nothing left but his hat, coat, and pants if these people were to clamp down on him as they were able to do and in a manner which he felt fearful they would do." Some merchants also informed the union members that they feared retaliation by the Citizens' Committee unless they went along with that group).
Tactics similar to those of the Remington-Rand Company were used during 1935 by the Brown Shoe Company, third largest shoe manufacturing firm in the country. The Brown Shoe Company then operated 14 shoe factories, one in St. Louis and the rest in small towns in the Middle West where the plants had been built with funds subscribed by representative citizens. The typical agreement provided for a certain sum of money to be furnished by the citizens of the town for the erection of the factory, which the company uses free of charge and will later own when it has spent a fixed minimum sum for labor in the plant during a specified period, usually 10 years. Often there is provision for a rebate of all taxes, business fees, and water rates during those 10 years. Approximately one third of the company's machinery is leased from shoe-machinery manufacturers and the rest can be easily moved to another town. Groups of citizens in small towns around St. Louis are constantly seeking to obtain one of the company's plants for their community.
Under such circumstances, the payroll of the company is the town's chief source of income, and the merchants and public officials of the town, many of them subscribers to the fund for the erection of the plant, are deeply interested in keeping it open and in operation. The economic threat to close the plant and move the work to another small town is sufficient to frighten the whole community. It was the closing of the plant, the threat to move, or the actual movement of machinery, that led in 1935 to the formation of citizens' committees in four small Illinois towns where the company had plants. In these towns, pressure was put upon union members by such methods as withdrawal of merchants' credit, solicitation by the citizens' committee of workers' signatures to an agreement to return to work under "any conditions stipulated by the Brown Shoe Company officials," vigilante attacks upon union officials, and the discharge of union sympathizers by local businessmen. Labor spies and corps of special police were also used. As a consequence of such tactics, the union was eliminated from these plants of the company."
Richard A. Lester, Duke University
Economics Of Labor, 1941
p. 651-656


I have noticed Pella factories in both Macomb, IL, and Murray, KY. I thought it was nice that they locate in rural areas were the towns have been hit by fewer farmers because of bigger tractors and combines. It looks like a coincidence that I have been in two of the seven towns that Pella uses. I do know that Murray actively supported the Kentucky West Tennesee Railway to service an industrial park north of their town. It appears they have convinced several companies to locate a factory in that park. I don't know if they offered tax incentives as well. And I remember when I visited Macomb that they talked about actively selling the town to industries to build plants there. Both Macomb and Murray have a university --- Western Illinois and Murray State. So the labor pool has access to good educational opportunities.

Update: In 1869 the Joliet city council offered a $75,000 bonus to the Union Coal, Iron and Transportation Company to build a steel mill in Joliet. There was a large civic celebration for the laying of the cornerstone of the main building on October 19,1869. There was an even larger celebration for the rolling of the first rail on July 12, 1870. "Almost 5,000 people tried to catch a glimpse of the first rail rolled at the mill." After the band played, the glee club sang, and speeches were made; the company "served generous quantities of lemonade, ale, and lager beer to the crowd that witnessed the launching of Joliet's era of steel." [JOLIET Transportation & Industry A PICTORIAL HISTORY by Robert E. Sterling, p118]

I noticed a headline in the Business Section of the August 4, 2017 Chicago Tribune: "TreeHouse Foods to lay off 375, close 2 factories." I thought TreeHouse sounded familiar. The artical provides the background information:


The layoffs, announced Thursday, make up a bout 2 percent of the 16,000 people the company employed at the end of last year. It has more than 50 factories in the US, Canada and Italy.
ThreeHouse, like other packaged food companies, has been hurt as more people chose to eat fresh foods and shop online instead of going to stores.

The towns that are impacted are Plymouth, IN; Brooklyn Park, MN; and Dothan, AL.

Update:
Middletown, OH offered money and land along the Erie and Miami Canal for the American Rolling Mill Company to build their new plant in their town.


Posted by Dennis DeBruler at 8:41 PM