This is a posting I plan to add to as I come across additional pictures of big machine tools.

Jason Baker added four comments on the above posting: 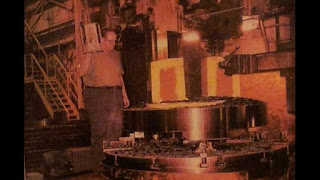 Derek C.Bryant Look at all those chips get the shop vac. And a big barrel or ten.

Chris Moore Too hot for a shopvac. They melt to the hose. We use shovels straight into a dump bin usually and then to the big bin. I only barrel the special alloys I don't want to mix up with regular steel. I typically run three machines at once so shovelling becomes half the work! I wish chip conveyors were feasible for me to put in.

Derek C.Bryant Oh ok. That sounds like a idea to prototype a stainless lined shop vac hose. To make that a easier job. Because there is a shop vac suction head for A 55 gallon drum.

Daniel P. Zink HOW DO YOU RUN THE MACHINE WITHOUT CHIP GUARDS

Chris Moore Heavy apron. Ha ha. We do have chip guards on the Bullards cause they turn a faster rpm and spit chips at you. Typically the King just piles them up neatly on the left of table. I will jog the King fast to clear the table to load a new part.


Troy Davis can't run vtl's ,gives me vertigo.tried many times to no avail.

Spencer James added three comments on the above posting.

I've seen a picture of a lathe in a Caterpillar plant that was so long and big that the operator rode in a cab on the tool holder. I wish I could have copied, or at least referenced, that picture.

About an hour after I wrote the above sentence, I came across the following picture of a long lathe.

Just like woodworking --- measure twice, cut once. A link to another machinist measuring the diameter of another large shaft.

Obviously a big lathe was needed to turn this after big machines forged it.


I was wondering about the scale of this bandsaw. Fortunately this comment answered my question.

Niles Bement Pond did not make machines as big as some of the others, but I include this link because I want to record the name.

Other big machines in the blogs:

Email ThisBlogThis!Share to TwitterShare to FacebookShare to Pinterest
Labels: machineTool