The only customer for this bridge is going to disappear.
Posted by Dennis DeBruler at 8:54 PM No comments:

(Satellite, 20 photos)
There are more photos and location information in PM and GTW Ferries.

This photo is older than 1931 because that is when the swing bridge was replaced with an Abt trunnion bridge.

While trying to figure out if photo's view is looking north or south, I noticed on Google Maps that there still exists a carferry apron. Taking a closer look at the photo, you can see two aprons in the left background.

I figured that this yard would have been abandoned by the time of the oldest satellite image, 1999, on Google Earth. But to my surprise, the yard was not only still used, there was a ferry docked at the remaining apron. Looking at Historic Aerials, the 1951 image shows both aprons are intact.  The 1964 aerial shows the northern one is no longer used and the apron has been removed. By 1973, they have filled in the shoreline to today's configuration.

These aprons and their tracks is another opportunity to check the accuracy of the USGS topo maps. Below is an excerpt from a map labeled as 1940 at 24,000 scale. It shows the two indents, but not accurately. The northern indent has the profile of 1973, not 1951. Furthermore, there is a track heading to the southern apron, but not to the northern apron. 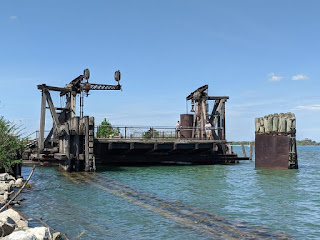 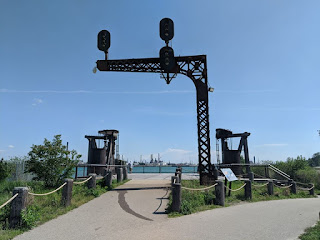 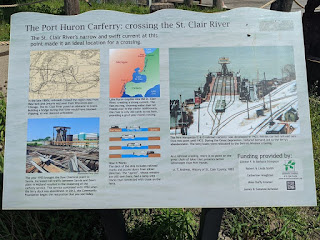 I'm preserving some current images because a street view indicates they are doing construction in the vicinity. If they do develop the land, I hope they preserve this history.

Nathan Holth on his Historic Bridges page complained about the lack of documentation for the new bridge. I share his frustration. Normally for a new bridge, you can find proposed alternatives, concept illustrations, environmental impact statements, and/or materials for public presentations. The only concept illustration I could find is this little one on their About page. Traffic had to use two lanes instead of four lanes during the six years of construction, but they were able to get rid of the lower roadway under the arch by 2017 to make room for New Panamax ships.


The deck on this bridge has been raised 64' to allow super-panmax ships to access container terminals on the other side. They are also having to dredge a deeper channel, 51'-57' depending on the stage of the tide. The 2000' wide Ambrose Channel starts twelve miles out in the ocean. It was built in 1931 with a clearance of 151'. In the mid 20th Century, the Port Authority predicted that the superstructure of ships in the future would top 190'. Pieces of the roadway over the water were removed by lowering them onto barges. The new channel was tested with a new container ship, CMA CGM Theodore Roosevelt, that is 1200'x158'x52.5' and can hold 14,414 containers. The previous maximum capacity was 9,400 containers. That ship stopped at other east coast ports before it docked at NYC. That would reduce its draft to below 51'. In fact, it was just 40.85'. This ship went under the Bayonne Bridge on Sept. 7, 2017. The wheelhouse on this ship was at the same height as the old roadway. "According to Port Authority statistics from a few years ago, seven million vehicles cross the Bayonne every year. About a hundred and three million vehicles use the George Washington." The bridge won't be finished until 2019. [NewYorker, pay count of 4. Some of the article talks about how dangerous the Kill Van Kull strait is to navigate because of tides coming in from both sides and a sharp turn in the shipping channel. The article also discusses Ammann, who was the designer of this and several other major bridges, and the harbor and sea pilots.]

(new window)  Among other things, this video animates how a travelling gantry installs the precast segments for the new approach spans.


This container terminal doesn't care about the height of the Bayonne Bridge. But these are the terminals I found that do care: New York Container Terminal, APM Terminals (can handle ships in both Newark Bay and Elizabeth Channel), and Port Elizabeth Terminal Corporation.

While looking for container terminals, I found these two RoRos (Roll-On, Roll-Off) in dock. Since I've never seen one with their ramp out, I wanted to capture this image.

Mississippi Lock and Dam #4 at Wings over Alma, WI


I copied a satellite image to show the width of the historic channel cut by the melting ice-age glacier runoff.
I assume the four Tainter gates next to the roller gates are the submersible gates because I presume they are the first ones they would open and they would want to keep the normal flow in the middle of the river to reduce erosion. Note that it appears two of them are open in this image.


Posted by Dennis DeBruler at 10:54 PM No comments:

(3D Satellite, the stable that burned is across the tracks from the abandoned incinerator)

Nathan Cervantes posted two photos with the comment:
The Rock Springs WY derailment 2020. Yes some of the cars melted from the extreme heat. I was here on related business and I was able to survey the area.
https://denver.cbslocal.com/.../union-pacific-train.../
[If you scroll down, this article contains the whole video from which the above image was extracted at about 0:09.]
John Scott: That tank car in the top obviously ruptured in a BLEVE.
Christopher Siders: Thermal misalignment, and incorrectly tamped track was what caused it per the company. [A comment confirmed that "thermal misalignment" is UP's current euphemism for "sun kink."]
Kevin Kearns: CN calls them Track Buckles
Erich Rudolph
From just looking at the first photo it appears the car suffered a ductile failure caused by flame impingement on the vapor space of the tank car tank shell. I was the principal FRA HM inspector at the derailment at Criagsville, PA where there was a similiar failure to a couple of tank cars of crude oil. https://apnews.com/article/7d616bacc7b8290e5421c402e527a6b5

</update>
I've been writing about incidents that "stress" tank cars. But I think this derailment is significant enough to warrant its own post.

A UP southbound ethanol train derailed at 12:40am, 4/24/2019. Five of the 20 cars burned for hours. A stable next to the tracks caught fire and three out of the 10 horses were killed. [NBC's video] The ties and stable were still smoldering when it got light enough for a helicopter to make a video for news channels.


FORT WORTH, Texas — At least 20 homes were evacuated after a train derailment near Yuma Drive and Riverside in south Fort Worth Wednesday morning.
Small fires are still smoldering at a nearby family farm whose horse stable also caught fire, killing three horses. [KHOU11]

They were worried about "chemicals" in the air. That is why the homes were evacuated.

"Firefighters said they are working to contain the fire as Union Pacific will investigate the cause of the fire." [KHOU11] I think it is pretty obvious what caused the fire --- they smashed some tank cars full of ethanol. It would be interesting to know what generation of safety design the tank cars were and if they performed as expected.


(new window)  At 2:10, they zoom in on a little jet of flame. But according to the report below, this video is seven hours after the main fire.


The video in this report shows that the fire right after the wreck was big. UP was lucky that it derailed in a more industrial part of Fort Worth.
There was a lot of rain because this video said the cars in the lower level of the parking garage of Love Field (their airport) were in 3 feet of water. (I skipped the "talking faces" part.)


I captured the above because of the strong current past the wheelsets. Then when I stopped the video a few seconds later I got the following. Those are two rails down in the drainage ditch! Then I noticed all of the ties on the side of the embankment. Rails and ties are supposed to be on top of an embankment, not next to it. It appears UP was also lucky that the locomotives and crew got across this area before the embankment caved in.

The rest of the video is rather redundant unless you want to see a horse in the field at -11:10 and the smoldering stable. This was the stable.

KENS5 video looks a little different, but it is very similar. It might have been a second cameraman in the same helicopter flight.

This is what the Chicago Tribune had about it on 4/25/2019 in their News Summary section. But KHOU11 reports this command vehicle caught fire when it came in contact with overhead wires. It had nothing to do with the train derailment fire.

HazmatNation has even less information than the mainstream media had.

I was going to skip this news article because the advertisements kept fighting me, but it has the information that the train had a mix of the old DOT-111 and new DOT-117 tank cars. It also has updated numbers: "Of the 24 tanker cars, nine leaked at least some of their ethanol cargo, including the four cars that witnesses saw burn up in the fire, officials said." "Jim Southworth, NTSB investigator in charge, said Thursday he was not aware of any ethanol making its way into any nearby creeks or other waterways, including Echo Lake, a small body of water adjacent to the derailment site." I guess nobody showed him the video above where I speculated about drunk fish in Sycamore Creek. The drone video shows that they brought in at least two mobile cranes and a photo shows a couple of sidebooms in action.

This is very disturbing because I thought BNSF has avoided PSR and had retained car inspectors and track maintenance. At this time of the year (Jan), it should not have been caused by a sun kink. This accident doesn't help the argument of the safety of railroads vs. pipelines. Note that the fire started as a 9-car ethanol fire and became a 29-car fire even though just 12 cars actually derailed. Fortunately, there must not have been any BLEVEs. And todays euphemism is that "fully involved" seems to mean "on fire."
Wichita West Volunteer Fire Department posted 19 photos with the comment:

***UPDATE as of 0615 hours***
Our crews have cleared the scene. There are a few rail cars still burning, but BNSF elected to let them burn themselves out.
***UPDATE as of 1645 hours***
29 tanker cars are now involved. Tanker shuttles are being used to provide water to the incident.
Wichita West Firefighters on Scene of Train Derailment.
Wichita West is assisting Wilbarger County, at US-287, near Oklaunion. 9 tanker cars carrying ethanol are on fire, with more cars threatened. 12 cars have derailed and 20 agencies on scene. One abandoned home fully involved.

Wichita West Volunteer Fire Department: This was between Vernon and Electra, near Oklaunion. BNSF is investigating the cause of the derailment.
Brandon Brock: What are those "pools" of water for?
Wichita West Volunteer Fire Department: Brandon Brock Those are storage tanks for the water. Due to the lack of hydrants in the area, we are having to shuttle on water, drop the water in tanks, to be used for firefighting operations.
[There are some videos of the "Oklaunion" train derailment after this post on the Facebook page.]
RaymondnMaribel Rodriguez shared
Britt Graber
Christopher Philpott
Odd I didn’t see you running your mouth about this one:
https://www.kiiitv.com/.../503-4750b65e-5574-4a66-ab41...

Posted by Dennis DeBruler at 10:43 PM No comments: