Unlike most powerhouses, the Olumpus Dam does not store water for the powerhouses. Instead, it is downstream of the powerhouses, and it provides the afterbay that smooths out the flow of water from the Estes Park powerhouse.
The conduit for the Marys Lake Powerhouse is fed by the east portal of the Adams Tunnel. That portal does not have a lake so there is no forebay for the powerhouse, which runs as a base load plant with a plant factor of 58%. Marys Lake is a forebay for the Estes Park Powerhouse, and it has Estes Lake as its afterbay, so its output fluctuates to meet daily variations in energy demand. Thus its production mode is "intermediate." Its load factor is 26.2%. [various mouse clicks in usbr]
These topo maps show the conduit that went from Marys Lake to the Estes Park Powerhouse.
Similarly, most of the conduit that supplies Marys Lake is under another mountain. This conduit is fed by the Alva B. Adams Tunnel.

Posted by Dennis DeBruler at 10:52 PM No comments:

1947 Alva B. Adams Tunnel and the Colorado-Big Thompson Project

West Portal: (Satellite)
East Portal: (Satellite)
Colorado has the problem that its water supply is west of the Continental Divide and its farms and urban areas are east of the divide. The 13.1 mile long Alva B. Adams Tunnel is part of the Colorado-Big Thompson Project that was built by the Bureau of Reclamation to help solve that problem. (To emphasize the severity of this water supply problem, one of the reasons for building the Moffat Tunnel was to transport water from the West Slope to the Front Range.)
80% of the water supply is on the West Slope, but about 85% of the population lives along the Front Range. [0:60]
The east portal is the output for the water carried by this tunnel under the Continental Divide. It is also the input for 69kv electricity being transmitted from the Estes Park Power Plant on the Front Range to pumping stations on the West Slope.
The water input at the West Portal is under the Grand Lake so we can't see the input. What we can see is the service entrance and where the electricity comes out of the tunnel.
Seven construction photos from NorthernWater-tunnel. "Construction of the Adams Tunnel began on June 23, 1940. Contractors bored the tunnel simultaneously from both portals, and when the two crews met on June 10, 1944, the alignment was off by less than the width of a penny. The first C-BT Project water flowed through the Adams Tunnel on June 23, 1947."


The water falls 2,900' down the East Slope. Six hydropower plants were built to capture some of that energy to help offset the cost of the project. The project wasn't finished until 1957 and cost $160m, four times its original estimate.

Posted by Dennis DeBruler at 10:51 PM No comments:

(Bridge Hunter; Historic Bridges; Chicago Loop; HAER; Satellite)
Google Maps calls this Washington Street Bridge, but all of the bridge expert sites call it Washington Boulevard Bridge. I put "Street" in the title in parenthesis to make it easier to do a title search for this bridge.
The original crossing of the river here was done with with the first vehicular tunnel that was built in 1868. (The only other tunnel was for La Salle Street, opened in 1870.) In 1891, the city moved the swing bridge that was at Madison Street to this location. The current bridge was built in 1913.

A history and photo collection written as part of a celebration of its 100th anniversary on May 26, 2013. This bridge is considered the first one of the second generation of Chicago-type bascule bridges because an effort was made to make the bridgehouses more attractive in accordance with the 1909 Plan of Chicago. Motivated by the need to build above the tunnel, a new foundation design technique was introduced tath was also used in subsequent bridges. And the 1911 patent by Chicago Public Works engineer Alexander von Babo was introduced. That design places the rack and pinion underground. (See Cortland Street Bridge for an example of the first generation rack-and-pinion design, which was above ground.) "During 1914, the first full year of operation of this bridge, a total of 9,540 vessels entered and cleared the Chicago River. The Washington Blvd. bridge opened 3,773 times in that year alone."
Historic Bridges uses the transition from a through truss to a pony truss as the distinguishing feature between the first and second generation Chicago-type bridges.

Significance: The development of the Chicago trunnion bascule bridge occurred during the first three decades of the twentieth century. Despite the controversy over patent infringement — Joseph E. Strauss charged the City of Chicago engineers with infringing on his patented StraussTrunion bascule bridge — the Chicago bascule received great acclaim within the civil engineering profession. [HAER-data]

Posted by Dennis DeBruler at 11:01 PM No comments:

(Bridge Hunter; Historic Bridges; pghbridges; B&T; 3D Satellite)
The bridge was started in 1958 and finished in 1963. But that completion date is in parenthesis in the title because it was a bridge to nowhere on the north end! In 1969 some ramps finally connected it to one highway and in 1986 some additional ramps connected it to other highways. [pghbridges] The delays were caused by problems with acquiring the right-of-way. [B&T]
A view from the top of the incline. The Fort Duquesne Bridge is the tied-arch bridge on the left. 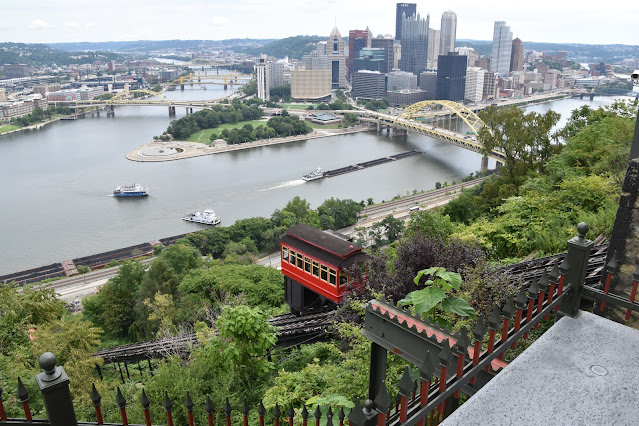 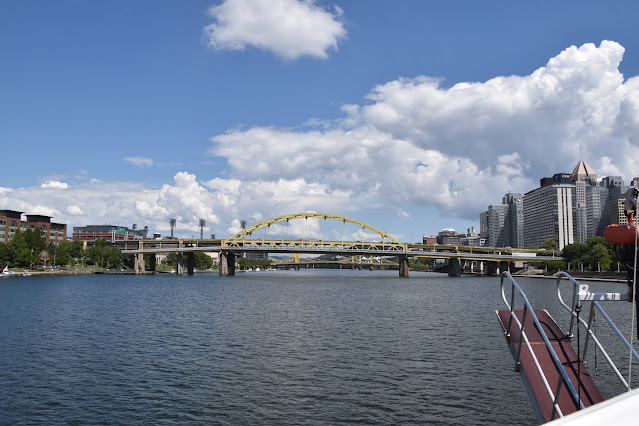 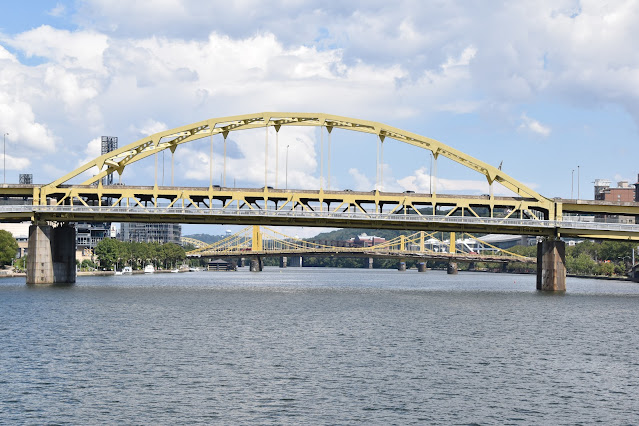 The first of the Three Sisters is the Roberto Clemente (6th Street) Bridge and the next two are the Andy Warhol and Rachel Carson Bridges. 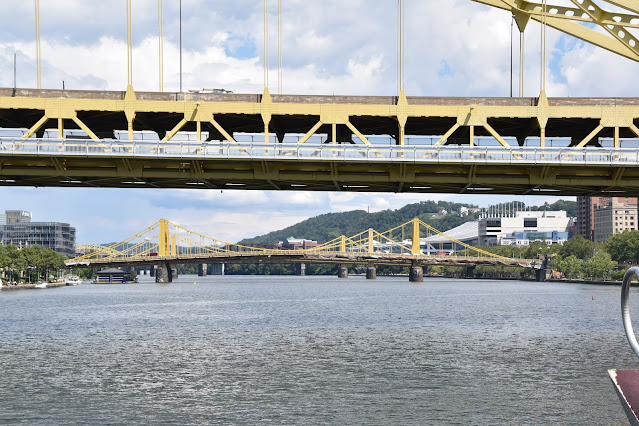 The Fort Duquesne Bridge is the one on the left.

The Fort Duquesne Bridge replaced the 1915 Manchester Bridge, which replaced the 1875 Union Bridge.
I believe the building on the right side of this photo was the Three Rivers Stadium.
Significance: The Manchester Bridge replaced the old wooden Union Bridge, the first bridge erected at the Point and demolished in 1907. Both bridges spanned the Allegheny, connecting the Point of Pittsburgh to its North Side. The superstructure consisted of two Pennsylvania through-truss spans, each 531 feet long, with a clearance of 70 feet above harbor pool level. The designs of the bridge and the finely crafted, ornamental ironwork of the portals were executed under the direction of the Pittsburgh Department of Public Works. [HAER-data]
The clearance of the Union Bridge was just 40', and the Secretary of War ruled that was too low. [B&T]
Originally, the bridge was constructed with rolled beams that were welded together. But that caused "lamellar tearing" because the structure was too ridged and it didn't absorb temperature and load stresses. So they went back to using bolted splice plate connections. [pghbridges]
Posted by Dennis DeBruler at 11:01 PM No comments:

(Satellite)
The creek next to the plant is Higgins Creek.
MWRD posted 13 photos with the comment: "🐐🐑The goats and sheep are on the go, munching our native prairie today at the Kirie Water Reclamation Plant in Des Plaines, providing an environmental alternative to maintain the grounds by reducing the use of herbicides and fuel. Stay hungry friends!"
Walter Bruning: Where are the goats kept in winter? How often are they transported to each site?
Metropolitan Water Reclamation District of Greater Chicago: Walter Bruning the herd is from Richland Center, Wisconsin. Depending on the workload at each of our sites, they will move around by trailer to where needed with our vendors from Vegetation Solutions. In less than a month, about 50 goats and sheep will clear out more than a dozen acres of shrubs, plants and other overgrowth with each animal clearing at least 250 square feet of vegetation per day.

Posted by Dennis DeBruler at 9:41 PM No comments: