Before they lay the asphalt, a new rode needs various layers of crushed stone to create a foundation for the road.

Since the abandonment was relatively recent, I could use Gobal Earth to determine where the industrial spur used to be. In April, 1998, they were digging the unloading pit.
I captured some other images showing hoppers on the spur. In each case there is a hopper over the pit. Some images verify that it is hard to find the tracks near stone piles. If there were not hoppers parked by the piles in some images, you could not determine there were tracks there.

Now that I know where to look, I can find the tracks on the property and...
...the turnout for the industrial spur.
Back when Class I railroads had plenty of coal to haul for many miles, they didn't care about carload business. CN is the first railroad where Hunter Harrison aggressively implemented his operating tactics that he labelled Precision Scheduled Railroading (PSR). The tactics were focused on reducing the railroad's operating ratio (expenses/revenue). One of those tactics was to quit servicing small customers. For example, by the time Hunter got to CSX, he required a grain elevator to load a unit train of at least 65 hoppers in a day or so. He refused to serve the customers that had been getting blocks of 20 hoppers. Actually, CSX was dumping customers before Hunter took charge. Some grain elevators were lucky enough that they were on a branch that CSX did not want. So that branch got sold to a shortline and the shortline was glad to combine the smaller cuts of hoppers into a large unit train for interchange with CSX. The Evansville Western Railway (EVWR) is an example of such a shortline. Grain elevators along tracks that CSX wanted to keep simply got screwed. Screwing a grain elevator also screws the farmers in the area because they get a lower price per bushel since it costs more to haul those bushels to marked. And it puts more trucks on our roads. I learned yesterday that a farmer is allowed to haul loads of 92,000 pounds. The normal legal limit is 80,000 pounds. [video for 40 seconds]

Why the Surface Transportation Board allowed the railroads to ignore their common carrier obligations is one of those questions that makes me mad and causes me to loose sleep at night. It is hard for me to watch a few greedy railroad managers and hedge fund operators gut America's railroad network.  I've read that some people are advocating letting shortline railroads use Class I tracks to serve the industries that had built along those tracks many decades ago to get rail service. Of course, the Class I railroads are fighting that compromise. They don't care if more trucks tear up our roads.
Posted by Dennis DeBruler at 10:51 PM No comments:

C&EIRHS posted two images with the comment: "For those of you interested in C&EI coal mine areas."
Christopher Gobert Where in the world did you come across these? The Williamson County Illinois map is especially interesting to me inasmuch as that is where I grew up.
Chicago & Eastern Illinois Railroad Historical Society I came across these two maps in a 1963 memo to the board of directors in preparation of what they would see during an inspection trip of the railroad. Interesting to note that in 1963, there still were using maps from 1921.

I concluded that the solid black lines are the C&EI routes. I like that the maps include the other railroads as dotted lines. You have to click an image and then save it so that you can zoom in with your favorite photo viewer.

Posted by Dennis DeBruler at 10:39 PM No comments:

(Satellite, the river is long gone. See topo maps below)

The Western Avenue bridge over the CS&SC was a few blocks south of this bridge.

If it was filled in during 1905, it is disappointing that the West Fork still shows on a 1929 topo map.

Posted by Dennis DeBruler at 3:59 AM No comments:

(Boatnerd; a ship tracker, another tracker)

See Old Lakers for some other "bridge on the bow" boats that I have seen.
A view of the stern of the sister ship Fairless shows it "pushing water."


(new window) This video has an informative narration, so it has earned a position near the beginning of the notes.


Leon Fraser was retired from iron-ore service in 1982. Her four sister ships of the 1942 "supers" class were scrapped in the 1980s. But this ship was shortened, converted to a self-unloader and renamed Alpena for starting cement service in 1991. [DuluthNewsTribune]

She hauls cement to the Twin Ports about once a month. [DuluthShippingNews (lots of photos)]

More about the recent fire mentioned in the above  video  This article implies that it is still a steamship. That would explain why it has "one of the loudest whistles on the lakes."


Steve Vanden Bosch posted four photos with the comment: "Mail Delivery Early 1900's on the Detroit River to the Alpena."
[But this was not the converted Leon Fraser. This one was built in 1909 by Detroit Shipbuilding.]

Drone photo of Alpena arriving in Alpena for the Lafarge Cement Plant. It is a cement plant. It looks like they have three older rotary kilns and two newer ones.

Posted by Dennis DeBruler at 5:19 PM No comments:

I've already discussed dynamic stabilizers in general. These notes record some photos and video that I was able to make when a super tie-replacement gang came to the Downers Grove Yard on Oct 23, 2019, and replaced 11,000 ties the following Friday, Saturday, and Sunday nights. When they unloaded the work train on Oct 24, the dynamic stabilizer stopped by the station platform while it waited for more room to be made for the equipment in the yard. So I took several photos from different angles to take advantage of the daylight because I knew the equipment works only at night on the busy BNSF Racetrack. 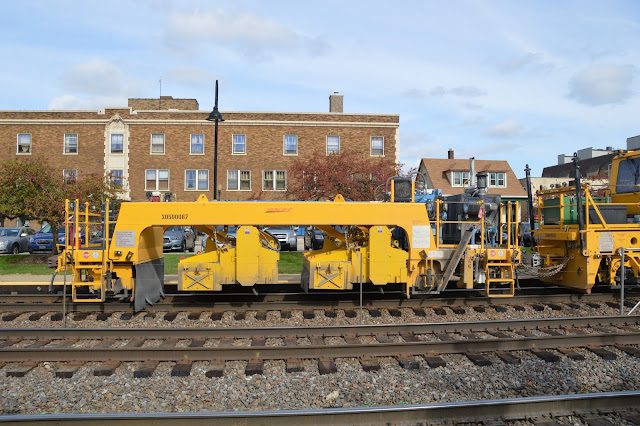 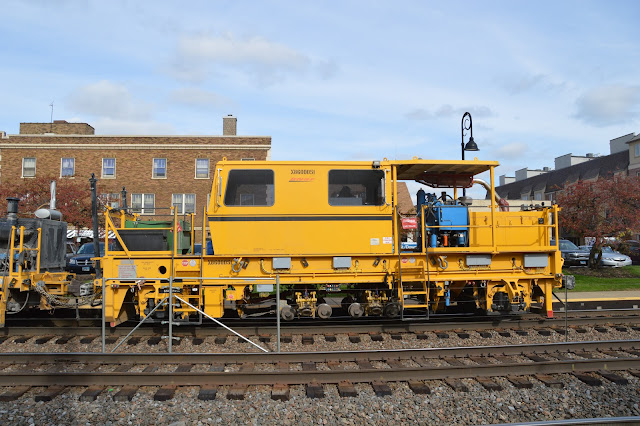 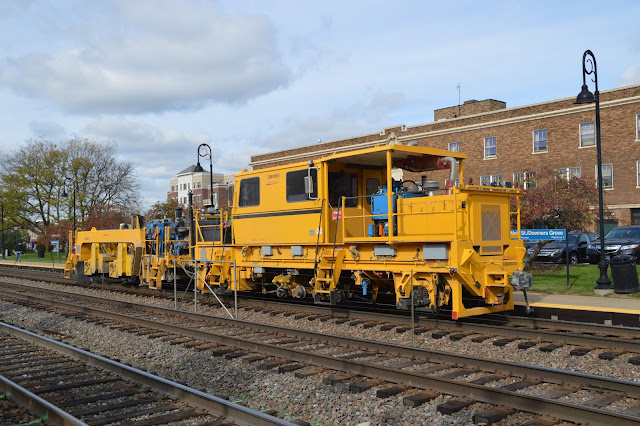 To catch the equipment working at night, I cranked up the cameras ISO to its maximum, 6400, and shot the equipment as it worked past the station platform's lights. Unfortunately, the stabilizer runs only its brooms by the platform. And only one broom was working. Fortunately, I got better clips later so the clip by the platform is on the cutting room floor.

The stabilizer has lights so that you can see the interesting parts in the dark. So I was able to get some useful clips west of Forest Avenue even though there are no platform or village lights over there. In fact, you can see the driveshafts in the nighttime shots, but not in the daylight shots, because the sun is not low enough to illuminate the underside of the stabilizer. 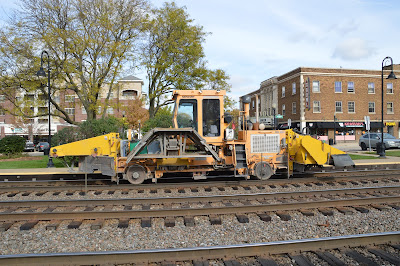 Both ballast regulators have brooms, but they don't use them in gang work because the stabilizer has a double-broom attachment in front. This saves the regulators from having to make an extra pass. They can focus on pushing ballast in place for the tampers. (There were two tampers, each with a drone, and two regulators in the work gang.)
(new window)
I've been able to get static shots of dynamic stabilizers when they were parked in the BNSF yard in Downers Grove, IL. But this is the first time I caught one of them in action. The first two clips are in daylight when they unloaded the equipment from the train with a scorpion ramp. They, of course, do their work at night on the busy Racetrack. So I was catching the action from the station platform where there are lights. But I learned that they do not run the stabilizer by the platform. In fact, they don't run it by the parking lot between Main and Forest. The fourth clip is where he was moving the guide wheels in place and starting the stabilization just west of Forest. I could feel the ground vibrate when the drive shaft started turning. But that clip got skunked by a train. So the third clip was made by walking west to a hole in the treeline made by ComEd. Without a train rolling past, the ground vibration was quite distinct. The work gang got track time starting at 2050, but the stabilizer is last so I had to wait until after 4am to get this clip. Note that this model still uses drive shafts. I wonder if the current model uses hydraulic motors. I could not determine the drive mechanism of current models from the photos I found on the web.


I was going to call the third sclip the money shot. But then I realized that neither my YouTube channel nor blogs are monetized. And my content is copyleft: "License: Creative Commons Attribution: Dennis DeBruler (CC BY)" So I'll call the third clip the good clip.

Posted by Dennis DeBruler at 11:42 PM No comments:

Bob Chaparro posted two photos with the comment:
The Railways Ice Company – Waynoka, OK
The Railways Ice Company, which was in operation in the Waynoka rail yards from about 1910 through the 1960s, was reported to be the largest ice plant in America. Santa Fe was an important shipper of produce from Central and Southern California for many years. The reefers typically were iced in California, Belen, New Mexico, and again at Waynoka on their journey to Chicago.
The plant itself was built, owned and operated by Railways Ice Company of Chicago, who had a long-term contract for icing and services with AT&SF Railway at Chicago IL, Kansas City MO, Waynoka, OK, Belen, NM, and Needles, CA.
Bob Chaparro
Moderator
Railroad Citrus Industry Modeling Group
https://groups.io/g/RailroadCitrusIndustryModelingGroup
Two photos from my Swift & Company notes.

Prior to diesel powered refrigerated box cars, railroads used insulated cars with spaces at each end that were filled with ice to transport perishable produce that originated mostly in California. These ice facilities were dotted along the systems to ensure cool delivery to the east.
The first two photos are of the Santa Fe "Ice Deck" in Bakersfield, Ca. in 1962. The older photo is undated.
Ice facilities were gone by the early 70s.

A nice view of the two loading hatches at each end of each car. Also note the walkways and hand brake wheels.

I can't find photos of it, but I remember that C&NW had an icing platform near the southwest corner of their Proviso Yard.

The photos that were here about the IHB icing platform have been moved to some notes about IHB icing.
(new window) JohnP provided this link and the following information in a comment:
An interesting 1950's video from the AT&SF about their Refrigerator Cars.
You can skip to 1m:57s if you want to skip the "Happy" part.
• 3:52, inside of refer car.
• 6:50, loading stations.
• 14:00, Bakersfield icing facility.
• 16:58, Needles re-icing.
• 17:30, Selling in-transit.
• 19:10, Argentine KS “Automated Classification” Yard
I've also read that the ice properties had to be customized for what was being shipped in the car. Basically, you could get higher vs lower moisture or temperature by changing the salt level of the ice, and by using varying proportions of blocked vs crushed ice. Each car had "icing instructions" that were part of the train's manifest. This is roughly equivalent to the "moisture control" on the refrigerator at home.
Too bad the railroads lost this traffic. It was quite profitable.