Every Labor Day Weekend a visit to the Hesston Steam Museum is special because they have all of their equipment running. I went the first year I got a digital camera, 2014, and took so many pictures and videos that I haven't been able to figure out how to present them. A partial solution is to start with their display of three stationary steam engines that are run from a single boiler because I need a picture of the 10-foot flywheel for another posting.

I started with taking a video that walks around the exhibit.
(new window)


Then I took some stills of each of the engines. 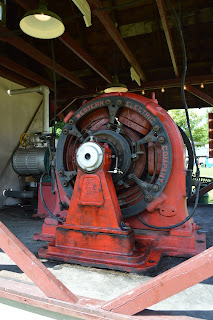 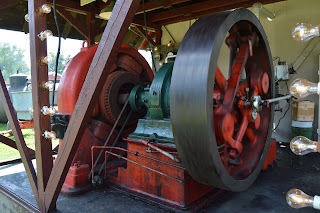 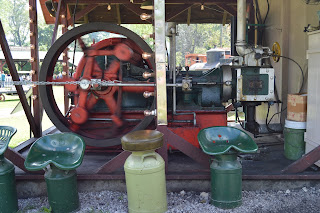 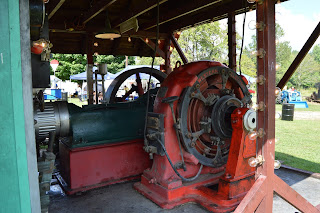 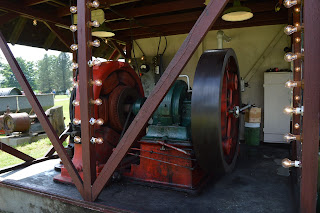 This was another genset on the grounds, but it no longer operates 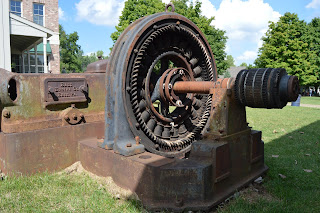 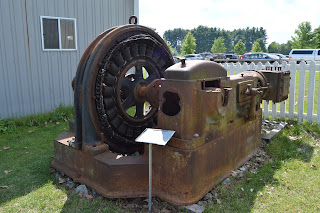 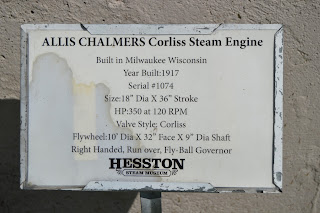 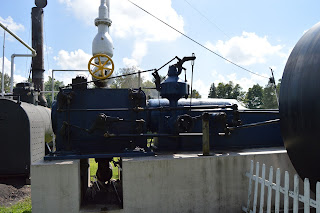 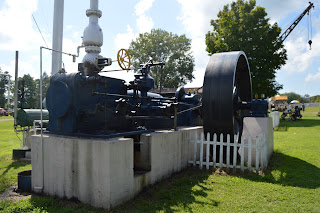 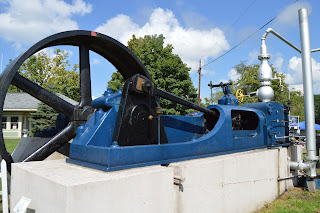 I took a couple of pictures to catch the movement of the crank and the dot on the flywheel. 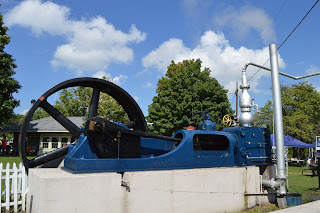 A closeup of the Corliss valve gear so that it would be brighter with less back lighting and because that is the main feature of a Corliss steam engine. 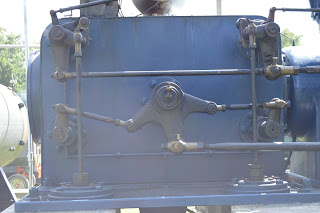 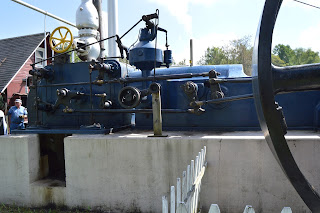 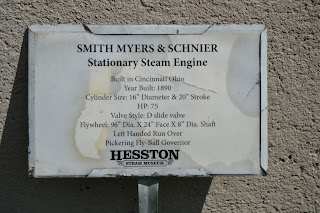 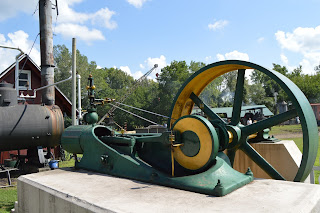 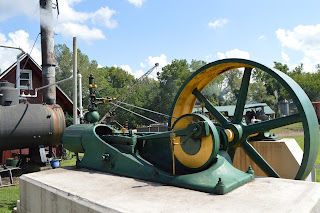 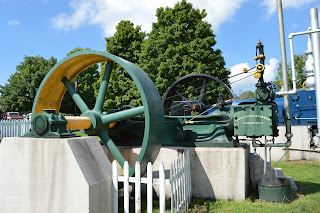 Email ThisBlogThis!Share to TwitterShare to FacebookShare to Pinterest
Labels: steam

(John Weeks III New; see below for the Satellite; Birds-Eye View, note that they have the main lock bulk headed because they are having to already do repairs to the lift gate. Since the repairs are being done during the shipping season, they are probably emergency repairs. That is, something broke already. It is a good thing they built the second lock!)
I wrote an overview of the old bridges and dam to provide some context.

The old dam has been replaced by a new dam about two miles downstream. So I have to use an old aerial photo to show the original dam. It was opened in 1938, but the longest lock was 600 feet, and it was creating a traffic jam of tows waiting to lock through. So construction began on the replacement Melvin Price Locks and Dam began in 1979 and the main 1200x110 lock was opened in 1989 and the old dam was demolished the next year. The auxiliary 600x110 lock was completed in 1994. The new dam has an enhanced visitor center called the National Great Rivers Museum.

HAER IL-31 has a pictures of the old dam and the two old truss bridges just downstream from it. HAER also has documented the construction of the new dam as IL-32. The railroad bridge has been abandoned and removed while the US-67 bridge has been replaced with a cable stay bridge.

You can still see where the west end of the dam terminated. John Weeks III explains that the old dam suffered from holes being scoured in the bedrock. "The structure was also prone of large movements during high water." If water could move the dam, I'm surprised they waited over a half-century before replacing it!


To all the folks in Jersey and Madison counties,,check out this photo of Chautauqua from the bluffs facing east,,notice the river level before the lock and dam in Alton,Illinois

The bluffs don't look as big, and then I realized that was his point. They must have piled a lot of dirt on top of those old railroad tracks to make an embankment for IL-100. I wonder how frequently that road gets flooded.

I include a satellite image of the main structures of the new dam because it caught a 15-barge tow entering the main lock.
J Clear caught the 110x42 feet Tainter gates in a raised position so that the river can run freely. It looks like the bottom of the gates have been badly damaged even though this is a relatively new dam. These gates look like a new covered truss design, and it appears the new design has failed. (The "link" in the caption gives you access to higher-resolution copies of this picture.)


Lock and Dam No. 26R represent the present state of the art in river navigation control works. The basic components of the installation are comparable to those utilized in the 1930s. The most striking difference between the older installations and Lock and Dam No. 26R is the immense size of the new structures. The significance of the new installation is not limited to its size. Throughout the design and construction process, the Corps of Engineers and the various contractors have engaged in an extensive program of computer-assisted design, testing, and evaluation. These sophisticated studies represent perhaps the most significant difference between the older structures and Lock and Dam No. 26(R).

The condition of those gates indicates designing with "engineer's gut feeling" is better than design by computer.

Clark's photo shows seven of the nine gates. The other two are between the two locks. I've never seen that before. This design strikes me as bad. There is the issue of increased construction costs because more guide walls need to be built because the locks don't share a wall. But there is also the operational issue that when those two gates are open, it creates an outdraft for the main lock. You can tell they are worried about an outdraft causing problems because of the two big, round buffers they built upstream of the gates. The HAER report implies that the lock was built on H-piles driven down to bedrock. Maybe the bedrock was significantly higher further from the shore to warrant the cost of extra guide walls. Also, they probably open these two gates only if the river flow is so high that the other 7 gates can't pass it. Maybe by that time the flow level on the river is so high that most shipping is shut down anyhow.

Update: During the 2017 flood, water covered the fixed part of the dam and was on part of the road on the levee on the MO side. On the Illinois side, the Great River Road and railroad by the bluffs were under water. And water was up to the mill.

Massman recently partnered with the
St. Louis District, U.S. Army Corps of Engineers
to support repairs to the auxiliary lock chamber miter gates at the Mel Price Lock and Dam in Alton, IL. The lock is the second furthest downstream along the Mississippi River.
Shown here is Massman’s Manitowoc 4600 Ringer removing and replacing the miter gate leaves. Each weighs approximately 480,000 lbs. Our fleet of company-owned equipment provides unsurpassed value and flexibility to public and private clients, with floating crane capacities up to 600 tons.

Six photos of the original construction
Brian McKay: Only other 1200 foot chamber on Upper besides Keokuk
8 photos during the removal of the old #26
Posted by Dennis DeBruler at 10:18 PM 2 comments:

(Bridge Hunter, no Historic Bridges, Satellite, the shadows show the height of the towers.)

(Update: I have taken my own photos and a video of a train crossing the bridge.)


This was a popular photo for postcard publishers.
C&EIRHS posted four photos with the comment:

Our C&EI HS Annual Meeting is this Saturday in Shelbyville, IL, at the Lake Shelbyville Visitors Center. We will be at the center from 10-1, then an afternoon auto tour. We hope you can join us.
We are following all COVID-19 guidelines.
A preview is the C&EI/MP/UP Shelbyville Trestle over the Kaskaskia River. These RPPC are from my collection.


Posted by Dennis DeBruler at 5:07 PM No comments: