The CB&Q and NC&StL created the Paducah and Illinois Railroad to construct the bridge to connect their railroads. The United States Railroad Administration forced the IC to move its trains from its ferry service to this bridge in 1918.
This bridge was designed by Ralph Modjeski (later Modjeski and Masters). [HistoricBridges]
Note that the far (Kentucky side) span is longer. At the time, it was a record long 720' simple span. The other four spans are "just" 551'.
Because I could not include all of the right-most span with the lens cranked all the way down to 18mm, I got a closeup of the north (Illinois) span. 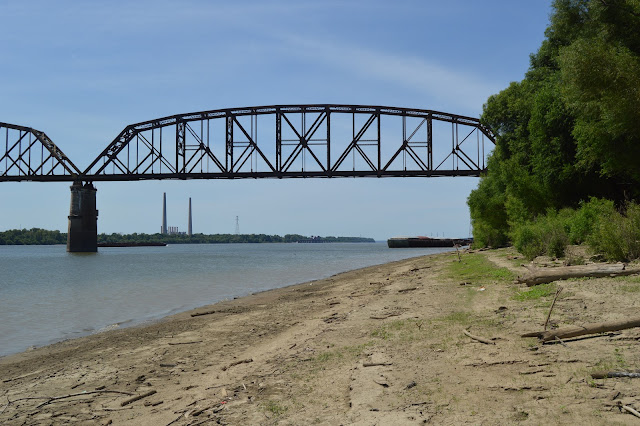 sternwheel-part4 has a couple of photos of the bridge. That page also has seven facts including: "At 708 feet the bridge contains the longest pin-connected simple through truss span in the world."

I have noticed that when you take I-57 to Kentucky you pass under a BN overpass in the southern part of the state. This surprised me when I first saw it because the motto of the Chicago, Burlington, and Quincy was "Everywhere West." Not South. Like the Milwaukee Road, CB&Q wanted their own access to coal in the Ohio River valley. In fact, James J. Hill, who aquired control the of CB&Q in 1901 could use the coal for his other railroads --- Great Northern and Northern Pacific.

If you have seen one of the 551' spans, you have seen them all. (Because of the driftwood, you can tell that this is a different photo of the span.) 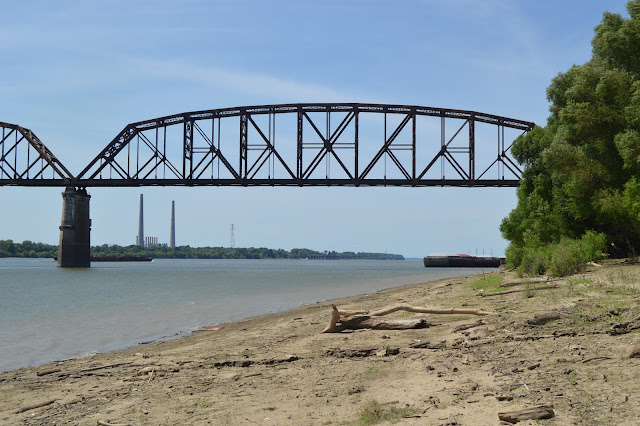 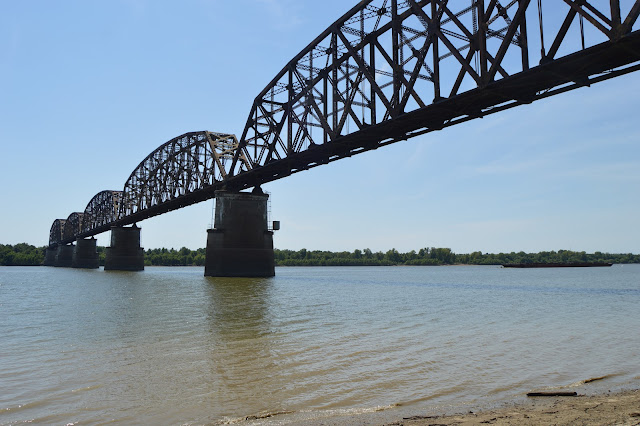 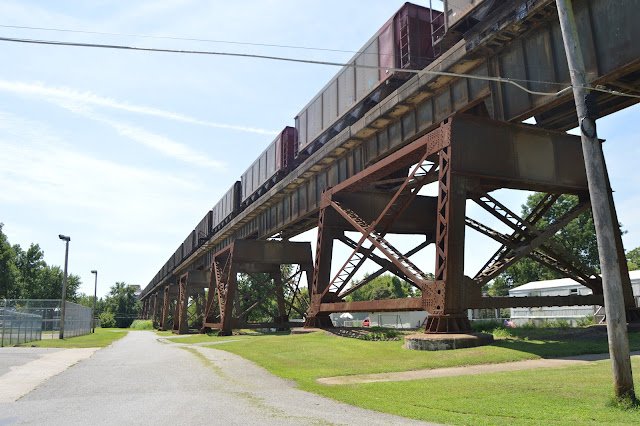 
I'm a comic book cartoonist as well as a railfan, and have enjoyed for years going to Metropolis (IL) for the big Superman Celebration in June. The river crossing there for the railroad line has one of the finest bridges I've ever seen -- seven spans, and an approach that must take a mile or two. Trains of several railroads share it. In addition, one of the people working the Metropolis show is a retired Illinois Central locomotive engineer/crewman, and it is always fun to hear his stories of the old days, as well!

Posted by Dennis DeBruler at 6:06 PM No comments:

Nevers Dam, 80' Bear Trap Gate was the longest at the time

The dam was removed in 1955 after 1950 and 1954 floods made it a danger to fisherman and canoeists. So I can't provide a satellite image of it. According to John Weeks, it had a head of 17'.

I learned about this dam because it was part of a tour of dams taken by two of the engineers for the Chicago Drainage Canal (now the Chicago Sanitary & Ship Canal). They studied the 80' bear trap gate at this dam to refine their design of a 160' bear trap gate for the CS&SC control structure. [Building the Canal to Save Chicago by Richard Lanyon, p55]

The St. Croix River was like the Muskegon River in that a lumber industry used it to float logs from the forest down to saw mills. Another similarity is that the dams on the rivers use a bear trap gate to pass the logs over the top. When the Nevers Dam was built in 1889, it was the largest wooden dam in the world, and the 80' bear trap gate was the longest gate in the world.

The wooden piers were built on top of piles and filled with stone. The road built across the dam was the only road across the river in the region. The truss bridge spans the 80'x20' bear trap gate and the 13 other gates were 16'x24' Tainter gates. The builder, Robert A. Lang, was the inventor of the bear trap gate.

J.R. Frawley was the manager of the dam for many years. Unlike the dams on the Muskegon River that were built to harness the river's flow to generate electricity, this dam was built to create a flow. Sometimes the river would not have enough flow to float the logs downstream. So they built this dam so that they could close the gates for two weeks to create a head of water and then open the bear trap gate to allow the logs to float downstream on a tidal wave of water. The sawmills would process that wave of logs during the next two weeks as the water and logs again built up behind the dam. The bottom photo shows that there was a significant leak at the bottom of the gate when it was closed.

By 1903 the logs were pretty well gone so the Northern States Power Co. bought it as a river control point for the hydroelectric power dam it planned to build 11 miles below at St. Croix Falls. The last log was sluiced through in 1912.

After 1955, the power company hired a two-man well-driller crew to take 100s of samples of the river bottom. But the results were that the sand and gravel extended down as far as 113' with sandstone beneath that. Northern States Power was evidently not aware of the Tumble Bays, long aprons, and pier keys used by the Midwest power companies to build concrete dams without a viable bedrock. For example, the Elkhart Hydro Dam.

Posted by Dennis DeBruler at 4:59 PM No comments:


Mark Arnold posted five photos with the comment: "CSX's Ohio River crossing between Monaca and Beaver Pennsylvania."
Pedro RamosPedro and 757 others joined RAILROAD BRIDGES, TRESTLES, TUNNELS AND CUTS within the last two weeks. Give them a warm welcome into your community! Wow makes you wonder how were they ever able to build a massive structure like this.
Dennis DeBruler One of the reasons for building cantilever designs is that it allows minimal interference during construction in the navigation channel. Typically, they would use timber falsework to build the trusses between the abutments and piers. Then they would use travelling derricks along the top chords to build the other sides with minimal falsework. I found some construction photos for a bridge: http://industrialscenery.blogspot.com/.../csxc-1917.... But the top chords on this bridge have a very steep angle, so I don't know if they could have used a travelling derrick.

Ryan Hewitt posted five photos with the comment: "One of my favorites."

John Wrynn posted two photos with the comment: "Another shot of the "Big Bridge" over the Ohio River. Also, photo of a smaller bridge that spans the Beaver River where it meets the Ohio."
Posted by Dennis DeBruler at 8:02 PM No comments: