Billy Duffing posted several photos as comments on a post about Lincoln Yard. Because the photos cover the C&NW Potato Yard and the UP/C&NW Global One Yard, I'm recording them in a separate post.

The following are the B&W photos that Billy posted as more comments on Gary's post.

Posted by Dennis DeBruler at 2:53 PM No comments:

Out-of-service: May 1979. But the bridge remained because it was carrying 20 utility lines including water, steam, gas and power lines. [PA277B]
(Update: the content concerning the Jones and Laughlin Steel mills has been moved to here.)

There are two truss bridges using shared piers. The Monongahela Connecting RR Bridge is on the upstream side and was reopened for road use in 2000. The Hot Metal Bridge was reopened for trail use in 2007. [PGHbridges] When the Mon Con was converted to street use, they removed a very wide shared truss on the north end. [Historic Bridges]

These two bridges connected the Pittsburgh Works with the South Side Works of Jones and Laufphlin Steel.


In 1887, a railroad bridge was constructed to link the the two sides of the operation. The upstream side carried two tracks for the Monongahela Connecting Railroad. The downstream side carried a single track used to shuttle hot metal from the furnaces to the rolling mills. Previous to this direct connection, the metal had to be reheated before being worked....Because the bridges share piers and have similar truss designs, the pair are usually referred to simply as The Hot Metal Bridge. It is more accurate to give this name only to the downstream side. The floor of this side has metal plates lining the floor -- protecting the river traffic and the wooden ties from the molten metal and sparks spewing from the opening in the top of each ladle railroad car. [PGHbridges]


Jones & Laughlin Steel Corporation began a program in 1960 to improve steel production. One of the areas was to replace the fleet of 80 ton submarine ladles with 165 ton ladles. This required considerable work on the Hot Metal Bridge in order for the Mon Con to handle the heavier and longer submarine ladles. The first phase was to reduce the dead load. This was accomplished by removing the heavy fire brick trough that made up the deck system and replacing it with a light steel plate covered with granulated slag. This was necessary to prevent any hot metal splashing into the river. This work was done under traffic by company forces. The second phrase was to strengthen the top chord truss members. This was done by drilling holes in the web of the truss members and bolting with high tensile bolts through reinforcing plates. Over 7,000 bolts were placed. The work was designed by Structural Associates of Pittsburgh and erected by company forces. [PA277C]

Posted by Dennis DeBruler at 9:13 PM No comments:

Arthur M Anderson is back in service after a 2.5 year layup

(Update: I discovered it has its own Facebook group.)

She sailed with the Edmund Fitzgerald "maintaining radio and radar contact with each other on their Lake Superior transit through a forecasted storm, taking the longer route following the Canadian shore. This route afforded more protection from the winds and waves for most of the trip versus the more direct route across the lake that would expose them to the full force of the storm." Consequently, she was the last ship to have sight, radio, and radar contact with the Fitzgerald. The next day she joined several other ships to look for her. "Other than the eventual recovery of the [two] severely damaged lifeboats, the extensive search resulted in only the recovery of various pieces of floating debris from the sinking." [BoatNerd]

Because of the economy, this old (1952), oil-fired, steam-turbine ship has remained in Duluth until this (2019) Summer.


Mike Grulke posted two photos with the comment: "Got two views of the Anderson tonight at Calcite.  It turned away from the the break wall on it's approach and went north for a while, turned around and came back to the harbor a short time later."
(new window)

fred xeje She is 767'x70'x36' and will hold 25,300 tons of cargo. Looking really fine.
Jack Corvette Those seas were that big...they rolled up his deck and he's got a list and the water stays up and it's gonna put his bow down underwater and then when she started down the screw just drove her to the bottom......-Captain Jesse Bernie Cooper [Cooper was the captain of the Anderson when the Fitzgerald went down.]

In the above video, she is leaving Duluth, MN, for her fist docking at Two Harbors, MN, to get a load of iron ore. I wonder if her first docking will add scrape marks to the new paint job.

In 1962 she did a couple of trips on the recently opened St. Lawrence Seaway to carry iron ore from Port Cartier, QC, to Gary, IN. A bow thruster was added in 1966 and a stern thruster was added in 1989. Her original length was 647'. In 1975 120' was added and she went from a 6x7x6 hatch configuration to a 6x12x6 configuration. The self-unloading equipment was added during the 1981/82 winter layup. Both major modifications were done at the Fraser Shipyard, Superior, WI. That shipyard also did the $4m refit starting on April 2, 2019, to return her to service. [BoatNerd]

12 photos of it unloading in Detroit
7 photos of it turning around
Bob Heiss: Open hatches at the start of the turn, all buttoned down by halfway through. Why the turnabout, any idea?
Kathryn Lafreniere: They seem to do that when they come downbound to work around Detroit Bulk Storage (near the bridge). They turn around well before the bridge and then back in.

Posted by Dennis DeBruler at 11:26 PM No comments:

MJ and BRC over CB&Q

In this topo map it is clear that Manufaturers' Junction used to have a connection to the east end of CB&Q's Clyde (Cicero) Yard. Since MJ connected to BRC, there were connections between CB&Q and BRC in three of the four possible quadrants.

During a commuter trip into town on Oct 21, 2016, I took photos to the south as I went through this crossing. 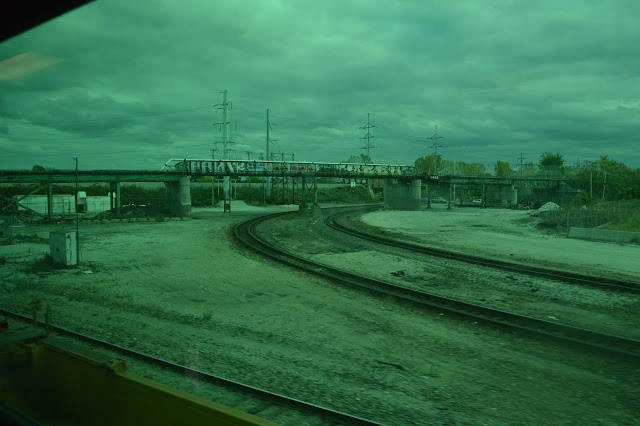 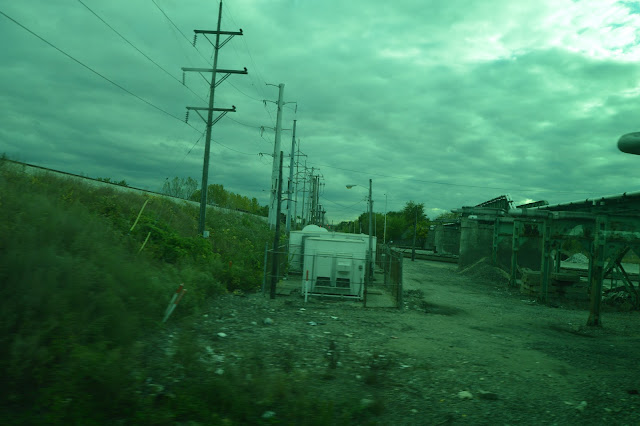 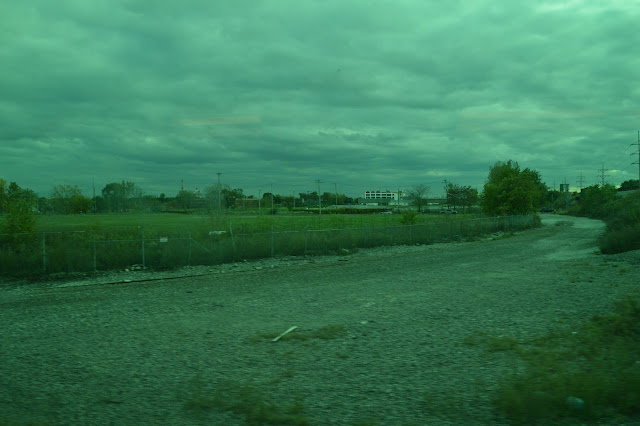 The are more photos in the comments on Matthew Linhart's post.
Walt Del Calle: This was a through train that normally runs on the Santa Fe.
[I had seen a comment that the crew was unfamiliar with this route. This explains why. It doesn't explain why there wasn't a pilot. But some Facebook comments indicate that the crew had paper work that would explain which tracks to use for double stacks. You would think if they were on a new route they would have been more diligent about reading their paperwork, not less.]
In the comments on this post the opinion is that if a crew gets orders to do something stupid, the crew should push back using a medium (e.g. radio) that will be recorded and if they are still told to do something stupid, they do something stupid. But I doubt if the crew pushed back in this case. If they knew there was a problem, then they would not have pulled 3/4 of a mile of train under the bridge.
Twisted Truckers posted three photos.
Justin Hughes shared
Ridge Abbott: Good to know the pins work .

Posted by Dennis DeBruler at 11:06 PM No comments:


(new window) Posted by Kevin Pike in Railroad Bridges Past and Present at 7/22/2019 0759.
"Norfolk Southern (ex N&W) inactive peavine line bridge crossing the Scioto River north of Portsmouth, Ohio. This line was taken out of service due to settlement issues with the bridge and the western approach."
Steven Ward Hard to believe that the mighty J class engines used to run about 100 MPH.
Kevin Pike Steven Ward still owned by NS between Portsmouth and Cincinnati, Ohio. It is leased on the west end from Cincinnati to just east of Peebles, Ohio to Cincinnati Eastern Terminal with light traffic and car storage. The washouts on the east end would have to fixed before anything could run on the half.
Steven Ward First of all, thank you for clearing that up for me on who owns that line. I heard it was sold off. Thank you for straightening that up for me. I saw trains parked on it in various spots. But wash outs? I didn't know there was any wash outs. Where at exactly? I heard the bridge shifted 5 feet.
Steven Ward NS got the former NYC main from Columbus, Springfield, Dayton, to Cincinnati line which at first ran a lot of trains on that line when Conrail was around. NS got that line in 97. Now sees maybe 13 trains per day. So NS may run trains up to Columbus then down to Cincinnati.


This bridge shows the importance of understanding a river's flood plain. Seven of the nine spans are over "dry land." But that was not enough because it looks like a washout of the embankment on the northwest side is part of the problem.
Kevin Pike posted a couple of photos by Preston Whitt near Rushtown as comments. They show why railroads need to spend so much money on track maintenance. And the bridge suffers from shifting piers.

Posted by Dennis DeBruler at 9:31 PM No comments: