Three point lift of an I-74 arch segment

(Satellite, the new bridges have yet to be captured as of Sep 2020)
I've been recording construction photos of the new I-74 bridges across the Mississippi River. Lately, I've just been saving the links because the construction has been well documented by the I-74 River Bridge Page. But a comment on the following post provided some information that makes it worth featuring with these notes.
I-74 River Bridge posted three photos with the comment: "We’re making progress on the Illinois-bound arch! Another segment has been installed this morning. At the top of these two segments are the stay cable connections."
Ben Stalvey shared
Well the MLC 650 makes this job look easy.
Mark Gallik
Excellent 3 point lift! What are the yellow parts in the load path? We commonly used chainfalls for adjustable rigging, but I'd imagine you can't buy one for that weight. Steamboat jacks?

Before discussing Mark's comment about a 3 point lift, let me note a couple of observations. First of all, with that much boom, imagine how stable the barge has to be so that the load doesn't "wobble." That would explain why the barge has four spud bars. Normally, I see only two. I wonder if those bars can partially lift the barge out of the water.
Secondly, note how small the workers are. We can see some at the bottom of the first photo on the barge and others on the work scaffold at the joint in the first and third photos.
At first I was confused about "3 point" because I saw four connections. But in this closeup of the second photo we can see that the cable from one side of the top connections goes through a pulley to the connection on the other side. That pulley turns two degrees of control into one. Specifically, that leg of the rigging controls the height, but not the rotation, of the segment. The other two legs control the rotation as well as the height. Note that two out of the three legs have a yellow thingy. As explained below, those yellow things are hydraulic rams that control the length of the leg. So I think the riggers will align the far upper corner of the segment first and then adjust the left leg to align the near upper corner and then lower the right leg to close the gap at the bottom of the segments.
The new software for Facebook and Google blogging makes it a real pain in the neck (and shoulders, I spend too much time at the keyboard) for formatting comments. So I'm going to go with a screenshot. 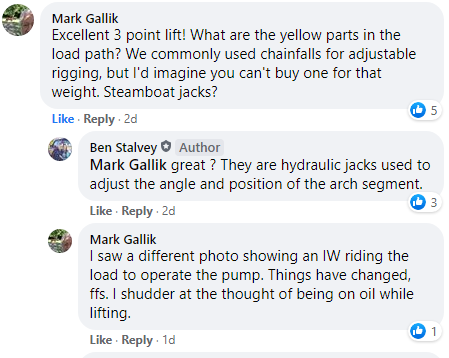 I checked out the Enerpac web site. At first, I found just catalog items such as heavy lift rams...
...and smaller "nudging" rams.
But then I found some of their custom work.
Posted by Dennis DeBruler at 8:38 PM No comments:

(Satellite)
The tallest bridge in the world.
Construction was from 2001 to 2004. It finished 25 days ahead of schedule.
(new window)  An animation of the construction

Posted by Dennis DeBruler at 11:00 PM No comments:

Email ThisBlogThis!Share to TwitterShare to FacebookShare to Pinterest
Labels: bridgeCable

(Bridge Hunter, has photos of 1966 wreck and rebuilding; no Historic Bridges; Satellite)

Jim caught a view of the piers. It looks like concrete extensions have been built on top of stone piers. I presume that the stone piers held up the original 1859 wooden trusses. Those trusses must have been unbelievably deep. It is hard to imagine them being strong enough to carry steam locomotives until 1935. Generally locomotives became heavy enough by the beginning of the 20th Century that spans built in the 1800s had to be replaced 2 to 4 decades before the 1930s.

The L&N had to build some interesting bridges over the Red River in the rolling hills of Kentucky and Tennessee. A trestle upstream and another downstream

Posted by Dennis DeBruler at 11:29 PM No comments:

BNSF/CB&Q and Road Bridges over the Missouri River at Rulo, NE

I'm used to seeing Whipple trusses on the C&NW. But this is the first one I remember seeing on the CB&Q.


It looks like some of the piers go down to just blue clay. But they were good enough that the 1977 rebuild reused them.

I was surprised when I saw the rebuilt date of the railroad bridge was in the second half of the 20th Century. It is not unusual for bridges built in the beginning of the 20th Century to last 100 years. In fact, it would be unusual for one of those truss bridges to not last 100 years because the railroads generally maintain their bridges. But it is unusual for a bridge built in the 1800s to last almost 100 years because they were generally rebuilt at the beginning of the 20th Century when steam locomotives started getting a lot bigger after air brakes became common. (You don't need more horsepower for a train that is too heavy for the brakes to stop.) The bridges needed to be stronger not only to handle the increased weight but also the increased impact forces of a steam locomotive.

The comments on the following post explain why the Whipple trusses lasted so long. This was evidently just a branch BN/CB&Q route until the EPA sulfur regulations caused the Midwest power plants to switch from Illinois Basin coal to Powder River Valley Coal rather than install sulfur scrubbers. I think the 1970s was also when rotary dump high-walled gondola cars and unit trains were developed.

When I looked at the satellite images, I noticed that the bridges had approaches across a lot of land on both sides. These photos confirm that the approaches cross flood plains. In the following photo we see that the land is covered all the way to these storage units. This was the 2011 flood. I wonder how deep the water was here during the 2019 floods.

some comments indicate that this reoad bridge shows up in the movie Paper Moon, a storm chasers episode on the Discovery Channel and something else that I now can't find.


The new bridge cost $25.7m and took three years to build. Part of that construction time was a work stoppage caused by the 2011 flood. [KMAland]

Traffic to this bridge was closed twice in 2019 because of flooding on US-159. [NewsChannelNebraska]

I-90 Skyway Bridge over Calumet River in Chicago, IL

Significance: The Chicago Skyway Toll Bridge system crosses the Calumet River on a 650'-0"-long cantilever Warren through truss. This is Chicago's highest and longest bridge, and perhaps more importantly, its symbolic eastern gateway. The Skyway's completion marked the final link in a system oftoll roads stretching from New York City to Chicago. This "toll bridge," however, also includes 7.8 miles of approach roads, which hint at an interesting legislative history. The Skyway's overpass and interchange structures contain specialty steel work such as welded rigid-frame bents and "hammer-head" piers, then relatively new designs. The toll plaza and service building, described in aseparate report, are also significant for their innovative design [HAER-data]

Construction photos
Rod Sellers Skyway is 125 feet above the river. Elevator lift bridges on the Calumet River are 120-125 feet above river when opened. ACE maps give specs.
Posted by Dennis DeBruler at 11:30 PM No comments:

(no Bridge Hunter?; Historic Bridges; 3D Satellite)
Unlike the B&O bridges closer to the lake, this bridge is still used.

The bridge is a massive high trestle, with the main spans resting on steel bents. In addition, the towers and other substructures are made of concrete.
Of the large bridges in North Dakota, this structure is the highest and the middle in length. It is longer and taller than the Gassman Coulee Trestle near Minot, but shorter in distance than the Hi-Line Bridge to the south in Valley City.
The structure is best accessed by using 10th Street SE from the west. The east side appears to be off limits and not possible to access. The bridge contains 26 main spans and 25 tower spans, giving a total count of 51 spans.
The bridge was built single track, and unlike the Valley City Bridge; it cannot be converted to a double track structure.
[John Marvig]

When I saw the width of the river, I wondered if this is a pool of a dam. Then when I saw it was labeled Lake Ashtabula on Google Maps, I knew there had to be a dam downstream. It is the Baldhill Dam. [Comment by Ken Swiderski]

This post confirms that Lake Ashtabula was formed by the Baldhill dam.
Dennis Haugen provided four images as comments on Jim's post:

This view of the bridge before the dam was built confirms that they cut off the bottom of the towers and built new "piers." I would have liked to see what the new configuration looked like before they flooded it.

There were a lot of gasometers in this area because every steel company with a coke plant would need one and the gas company appears to have some also. Gas holders associated with a steel plant are documented as part of that plant.

The "white" gas holder in the above aerial is seen below.

This construction photo of the Skyway caught the gas holder rather empty.

Posted by Dennis DeBruler at 11:14 PM No comments: