The predecessor LTV plant in Chicagoland was in Chicago. This plant was an expansion of their Chicagoland operation. I was able to determine that LTV was the west part of the Indiana Harbor complex from this statement: "2002 Ohio-based International Steel Group (ISG) purchased the assets of Acme Steel and LTV Steel Company including Cleveland, Hennepin and Indiana Harbor West" [ArcelorMittal]

Aug 3, 2020: ArcelorMittal is laying off nearly 900 workers because the Covid-19 recovery is weak. This would include the west part (former Inland Steel) as well. [AgMetalMiner]

Aaron's photo allowed me to confirm that #4 is the furnace on the right. He took a shot of the northeast side of the furnace.


Posted by Dennis DeBruler at 5:14 PM No comments:

Facebook's Doomsday has happened. But I have discovered an escape to the classic version so that I can still get examples of how they did stuff better.

Some URLs can be rather long. When a long URL is shoved into Facebook's skinny timeline display, it consumes a lot of screen lines. 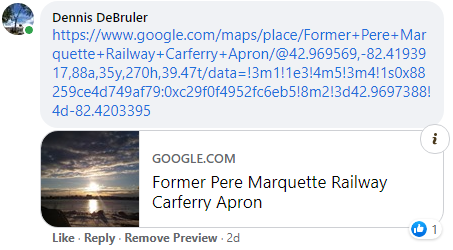 The classic version did a good job of abbreviating them so that only one screen line was consumed. Specifically, it included the domain name and the end. Actually, now that I look at it, it is smarter than using just the end. Now I'm curious what their algorithm was. But I won't be able to study how they abbreviated URLs until, hopefully, they copy that code forward into the new version.

Some URLs can fill a screen with quite a bit of gobbly-gook. 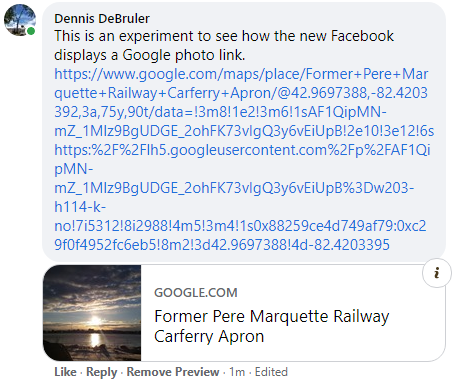 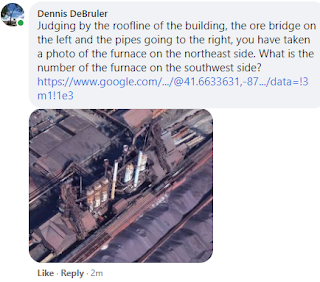 Posted by Dennis DeBruler at 11:52 AM No comments:

Google Lemonade: GOOGLE HAS DESTROYED SOME OF MY NAMED ANCHORS!

When I was writing about the Cos Cob Power Plant, I wanted to reference my notes on ComEd's Fisk Power Plant using the link https://industrialscenery.blogspot.com/2014/05/midwest-generation-power-plants.html#fisk. But when I tested that link, it didn't work! So I looked at the HTML of the target notes. What I expected to find was the named anchor:

What I found was:

The Midwest notes had three named anchors, and all three of them were missing the "name" attribute. So I added it back in. The new version no longer adds a bogus href attribute, which is good.

I quickly spot checked another post that had named anchors, and it was OK. So I lost some sleep trying to figure out how to find the destroyed named anchors in my thousands of posts. The new version supports a "body" search which looks at the HTML as well as the visible text. So the query I needed was the boolean expression:

But Blogger doesn't support boolean expressions. (But believe me, the new search is far better than the search in the legacy version since the author's search in the legacy version broke April 3, 2018. I've been having to find posts using just a label. In fact, the search function is the only thing I have found so far that is better in the new version.) So I needed to do two body queries and eliminate from the first result those posts that appear in the second result. But the results of these searches is so big that I haven't taken the time to even force a loading of all of the results.

Then yesterday I was working on my Met "bridge to nowhere" notes and discovered that the forward reference https://industrialscenery.blogspot.com/2016/12/the-met-and-its-abandoned-bridge-over-c.html#met did now work. So I switched to HTML and searched for "/null" to add " name="met"". But I did not find it! So I added "zzz" to the notes where the name should be and looked for zzz in the HTML. To my horror, there is no <a> element for a named anchor! So I can't even search for "/null" to find where I have problems.


<a href="https://www.facebook.com/dennis.debruler.7">Dennis DeBruler</a> The former "L" bridge in the background. Now it is just a signal bridge. This "L" route was replaced by the Dearborn subway.</td></tr>
</tbody></table>
zzz<br />
The Metropolitan West Side Elevated Railroad was the third one built in Chicago and the first to use electric traction. [<a href="http://www.chicago-l.org/operations/lines/garfield.html" target="_blank">GarfieldPark</a>]

That is not correct HTML, but it did work when I tested it.

So now I have the situation that Google has destroyed some of my named anchors and I have no way of finding what needs to be fixed. Named anchors is a feature that I use rather frequently so I was glad when I saw that the new version supported adding them. Google has since removed that support.

Unlike Google destroying URLs, I have no idea what causes it to destroy named anchors so I don't know what to avoid doing. In fact, I don't even know if it was the new or the legacy version that destroyed them! They may have been broken for years, and I just now happened to need a broken one.
In the case of URLs, I have to avoid removing the formatting of text. I did a quick test. This bug is still there even though I found and reported that content destruction bug soon after they released the new version. (The correct domain in the screenshot is not blogger.com.) At least they improved their URL display a few weeks ago so that it is easier to check the URL content.

I did force the entire results of the "body:name=" results to be loaded and I saved the results below as a series of window captures so that a year or so from now I can see how many more named anchors Google has destroyed. But before I did that, I took a nap. After sleeping on it, I realized that would give me a list of posts that would have damage, but I wouldn't know the names that got lost. But then it occurred to me that I could find the lost names by searching the blog for links to the name. To test this theory, I searched for posts that referenced the Midwest posts: 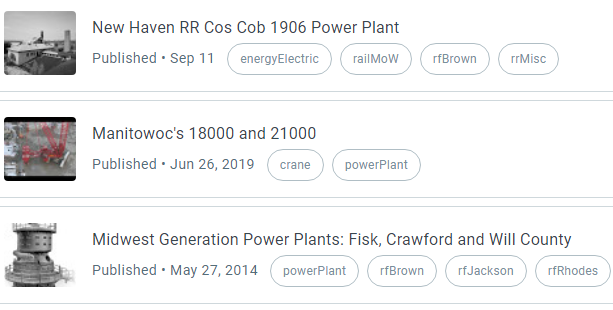 If this doesn't remind me of the names, then I can go into a post, switch to HTML and search for ".html#" to find the names. Hopefully, when I learn the names, I can remember where they belong in a post.

Current posts that have named anchors 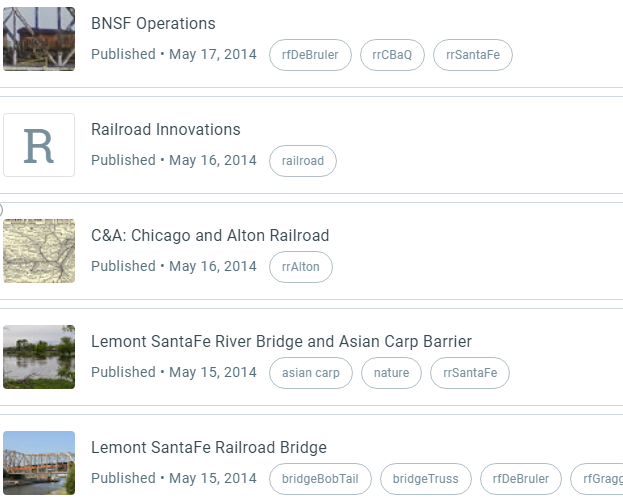 If sweeping out 21 screenshots and saving them wasn't a torturous enough waste of my time, I remembered that I have a second blog. Fortunately, I don't cross reference as much in that blog. 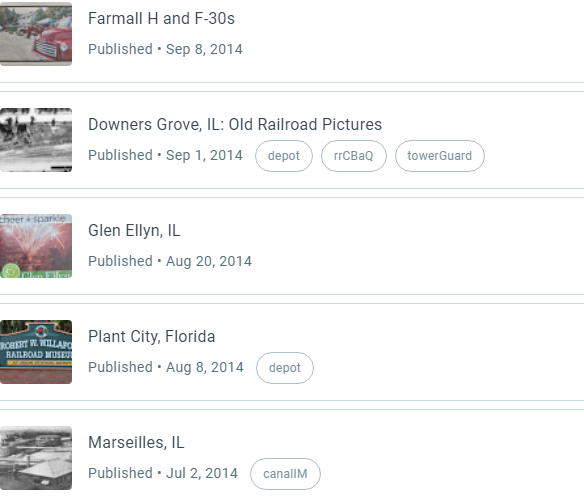 Posted by Dennis DeBruler at 11:19 PM No comments:

Aban/D&SL: piers in the Kankakee River


This street view is looking the opposite way through the line of trees that Ken took.

Posted by Dennis DeBruler at 10:58 PM No comments:

Then I switched that page to the new version and "post" is no longer hot.

Then I went back to the saved list and switched it to the new version and again accessed this shared item in case there was a version mismatch issue and the above was an unfair test. But again, I'm not able to easily get a permanent link to the post that was shared like I could with the classic version.

Posted by Dennis DeBruler at 8:56 PM No comments:

Another day, another problem. The hits just keep coming.
<update>
It just occurred to me that I was assuming that triple-click would work the same way in the new version as it did in the classic version. Silly me. I just did a test. I triple clicked the description of a photo in the new version and then went to the next photo. The description in the second photo WAS NOT SELECTED as it is in the classic version. So my complaint below about triple-click selecting too much content is irrelevant because Facebook broke why I would triple click in the first place!
</update>

The first screenshot shows were I triple-clicked the description of a photo. 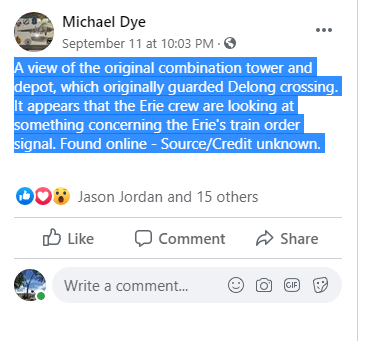 The second screenshot shows the resulting paste into a photo caption where the "3" line had already been entered.

Note the extra white space at the top between the 3 and the text and the garbage at the bottom. The old version copied just the text, which is what I want.

The reason for triple clicking instead of sweeping the text is so that when I advance to the following photos the text will automatically be selected as shown in this screenshot. 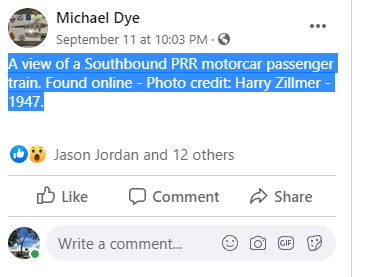 This is what it looks like if I sweep, instead of triple-click, the text for the previous photo. 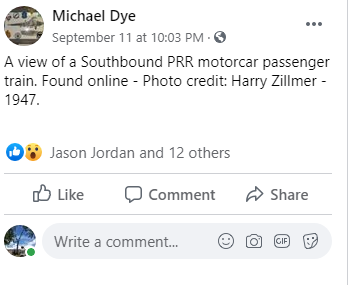 Posted by Dennis DeBruler at 8:19 AM No comments: