A regular connection used to connect the CB&Q with Pennsy's Panhandle.
A track has been added to crossover the former Panhandle RoW and connect to the B&OCT tracks. There is also a track going south that is part of BNSF's Horseshoe Project.
A flyover connection still connects the BNSF mainline to a BNSF branch that heads south to a few remaining industries along the South Branch of the Chicago River. And a regular southeast connection still connects that southern branch to the other direction of the BNSF mainline. 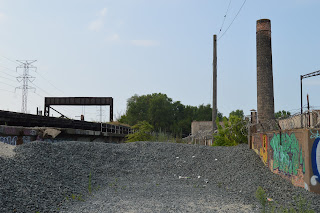 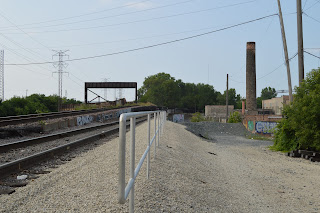 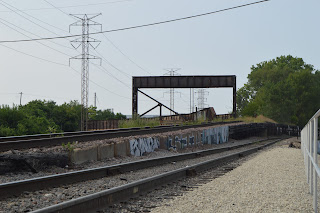 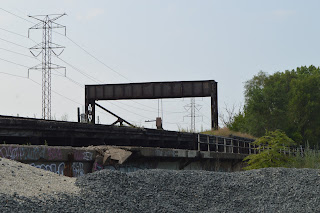 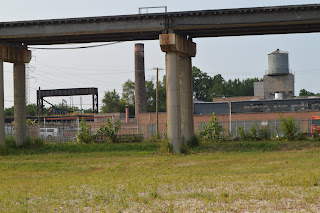 Now I'm taking photos on the west side of the tracks in the Western Avenue corridor. 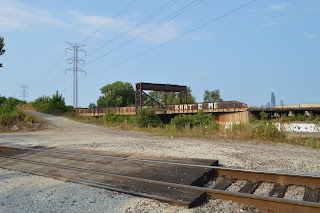 I also grabbed some shots of the crossing from a commuter train. 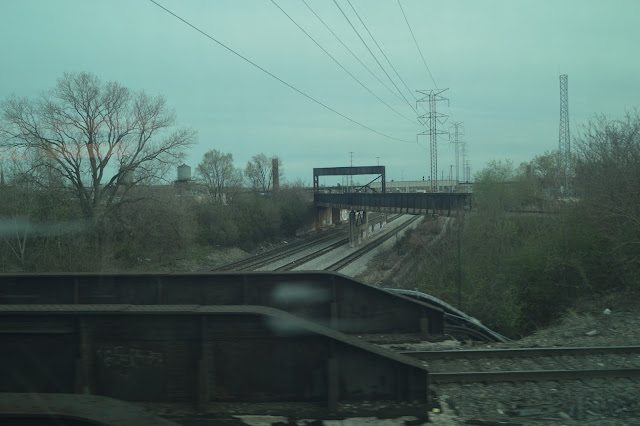 Posted by Dennis DeBruler at 10:22 PM No comments:

This bridge is so famous that I didn't bother with a title that includes the body of water and adjacent town. It carries I-75 between the upper and lower peninsulas of Michigan.

"The Mackinac Bridge is currently the fifth longest suspension bridge in the world.  The bridge opened to traffic on November 1, 1957." [MackinacBridge-Facts&Figures] It is still the longest in the western hemisphere. [MackinacBridge-MightyMac] The main span is 3,800'. The whole bridge is five miles long.


The suspended span is a small part of the bridge.
MDOT's Facts&Figures has some construction photos, although they are frustratingly small. What caught my eye is that no one knows the depth to bedrock at the midspan! At the piers, they had to go through up to 142' of water and 105' of overburden. The truss is rather deep. The height of the roadway is 199' whereas the clearance for ships is 155' Once again, Laker dimensions are bigger than Seaway dimensions because the Seaway requires only 116.5'. [CanalDimensions]

The history page on the MDOT and authority web pages have the same text. I recommend the MDOT web page for the history of the bridge because it has better formatting.

I never appreciated how long the deck truss segment of the bridge was until I saw this photo. And we still don't see the truss reaching the shore.
Here is another view that shows the suspended span is a rather small part of the whole bridge.
Keyhole Bar & Grill posted seven photos with the comment: "Ironworkers can tend to be a little high maintenance sometimes. Before the first section of tower was set on July 5th, 1955, they were assembled on the ground in Ambridge Pennsylvania to make sure they fit together properly.  They were then dismantled and shipped to St. Ignace by rail, loaded up on a barge and taken to where they have stood for the last 66 plus years. Each section weighed 19 1/2 ton.  They assembled 50 feet a week until they reached 552 feet above the water. The last photo is the first section of tower being set on July 5th, 1955.  Each tower weighs approximately 3250 tons. Quite the feat.  Enjoy the Day!"
James Torgeson shared
Some scenes of the American Bridge Division of USS building Mighty Mac! Note the photo of one of the towers being assembled on the ground at the giant American Bridge home plant in Ambridge. (By the way, the Keyhole Bar in Mac City has great food!)

It is hard to capture that the suspended span is a small part of the 5-mile long bridge.


This mlive page is supposed to have a gallery of 30 construction photos, but I could get just ten photos to display.

The longest suspension bridge might be a topic like the largest steam locomotive --- it depends on what you measure (between towers or cable piers or anchors). MDOT's About calls this the third longest suspension bridge whereas MackinacBridge-Facts&Figures calls it the fifth longest. Or is the MDOT web site out of date? HistoricBridges also calls it the third longest. It was the longest in the world when it was built, and held that record for several decades.

The 1940 collapse of the Tacoma Narrows Bridge was still fresh on everyone's mind when this bridge was designed in the mid 1950s. The stiff truss is designed to eliminate micro movements such as longitudinal waves caused by wind induced resonance and torsional (twisting) waves caused by aeroelastic flutter forces. It is not designed to eliminate macro movements. "It is possible that the deck at center span could move as much as 35 feet (east or west) due to high winds. This would only happen under severe wind conditions. The deck would not swing or 'sway' but rather move slowly in one direction based on the force and direction of the wind. After the wind subsides, the weight of the vehicles crossing would slowly move it back into center position." [MackinacBridge-MightyMac]

"Over the five mile length of the bridge, 27 feet of expansion ability had to be provided....Changes in temperature also cause the length of the main cable to change. In warm weather, this causes the cable to lengthen and thus at the center of the bridge the cable lowers. A distance of up to seven feet (with six feet the typical expected maximum) of cable movement up and down was provided for. The movement of the cable would be even greater if it weren't for the fact that when it warms up, the towers holding the cable become taller, counteracting to a small extent the lowering of the cables." [Historic Bridges]


Two of the ten photos posted by Don VeVier.

Chris D Holton posted three photos with the comment: "A few photos from the building of the Mackinac Bridge 54’-58’
All floating rigs belong to Merritt Chapman Scott."

(new window)  Aerodynamically designed for winds up to 600 mph