Historic Bridges indicates this bridge was designed by Strauss Engineering instead of the City of Chicago.

If you can find a place to park, it is easy to take photos of railroad bridges from road bridges. But the converse is not true. So I'll use a satellite image.

Posted by Dennis DeBruler at 9:25 PM No comments:

Steel is stronger in tension than compression

And the demonstrations just kept on coming.
Any old truss bridge shows that members in tension are much cheaper (less metal and less fabrication) than members in compression. This is an example of v-lacing compression members.
HAER explains that the truss members were fabricated in their shop and then shipped to the site and assembled using a local work crew under the supervision of a field agent who worked for the bridge company.

This Big Four Bridge over the Ohio River is so big that even the "simple" members are rather substantial.
Another bridge that has been converted to pedestrian use and allowed me to get up close and personal with the truss members was the 135th Street Bridge in Romeoville, IL.

This bridge is basically a Warren Truss. They evidently don't have pure tension members. But the vertical members are thinner than the diagonal members.

The swing span is a Warren Truss, but the approach spans are Pratt trusses and the diagonals have just tension so they are simple bars.


Posted by Dennis DeBruler at 10:14 PM No comments:

You can tell that shipping is active on the Saginaw River because the railroad bridges are normally open.

JA Garfield posted two images with the comment: "Third Street Bridge 1889-1976, Bay City, Michigan. It opened in the middle of the night for a ship, and collapsed. Drawing by Scott Shaver."


More pictures of the Third Street Bridge, over the Saginaw River, that connected the east and west side of Bay City, Michigan. It was built in 1872, and collapsed June 18, 1976 as it opened for a ship at 3:10am. It had been struck by another ship passing trough the day before, which probably did structural damage.

Dan Mathers What is happening to the bridge today?
JA Garfield Dan Mathers Unfortunately they pulled it down, and built a typical DOT type drawbridge downstream to replace this, and another two lane swing bridge in town. Both new bridges have been nothing but trouble, and are down for repairs, more than they are open to traffic.
[I could not find a two lane swing bridge.]
JA Garfield When I was a kid, when we would hear a ship blowing for the bridge downstream, we would ride our bikes to this bridge, and ride the span when it swung open. We'd get a great close up view of the ships as they passed through a couple feet away.

Posted by Dennis DeBruler at 10:18 PM No comments:

BNSF is going to build a new bridge. It wants to replace this one. Some citizens want the new bridge to be on a new alignment so that this bridge can become a trail.
I was surprised the Missouri is so wide this far north.


This was a popular railfan location.
These 1882 piers are made with granite. The spans were built in 1905. [John Weeks III]
Maybe BNSF would be better off moving the new bridge to a new alignment.


Based on a paper written by Ed Murphy of the ND Geological Survey, the railroad (first Northern Pacific, and now BNSF), have had endless problems with the eastern pier of the High Bridge. Just after completion, the east pier began shifting towards the Missouri River at a rate of 3 to 3-1/2 inches per year. A number of repairs were attempted, but none seemed to work. In 1898, the pier was dug out and moved back onto a larger foundation. By 1902, the pier was already 4 inches off center. After further investigation, it was suspected that the city water reservoir located on a hill above the railroad track was leaking large amounts of water, causing the entire hillside to slide towards the river. The NP built a tunnel under the area to try to drain the water, but the pier continued to move. More projects were completed in 1918, 1923, and 1940 to try to slow down the landslide. In 1951, the NP undertook a major project to cut down the hill and regrade the area. This helped the situation by slowing down the movement to 1/3 of an inch per year, but did not stop the movement. [John Weeks III]

According to John Weeks, BNSF runs most of their trains over the former GN route. This NP route became busy hauling Powder River Basin Coal. But that traffic is drying up as coal-fired power plants are being converted to gas or shuttered. So the cost of stopping traffic on this route while they replace the bridge might not be high enough to help save the old bridge with a new alignment.
Michael D Thoreson posted three photos with the comment: "A loaded coal train crosses the Missouri river bridge between Mandan and Bismarck, ND on Sunday morning, 9/19[/2021]."


Posted by Dennis DeBruler at 10:32 PM No comments:

A much needed straightening of Renwick Road was done. Fortunately, they turned this bridge into a pedestrian bridge.

Date of Construction:
1912, accepted date, possibly earlier
Although the locally accepted date of construction of the bridge is 1912, the truss details incorporate practices common in the 1880s and 1890s. [An argument that this bridge was built before 1900 is that the company was absorbed by the American Bridge Company in 1900. "It is questionable that the company would have continued to use the Wrought Iron name plate after merger." An argument that it was built before 1890 is that it doesn't have knee bracing.]

Significance:
This single-span bridge, located near a historic site on DuPage River is a through Pratt truss, 151 feet in length, the last surviving through truss in Will County, and an example of a bridge type once familiar in Illinois. This truss, built by the Wrought Iron Bridge Company, is one of three spans in the state known to have been built by this prolific Canton, Ohio, builder. Pin-connected Pratts were a common late 19th and early 20th century metal truss design which is vanishing from the American landscape.

I was surprised that Will County is down to just this one through truss bridge.

Comparing my photo at the top to the comparable HAER photo, I noticed that someone has stolen the plaque on top of the west portal since 1995.
Fortunately, the east portal still had its plaque. 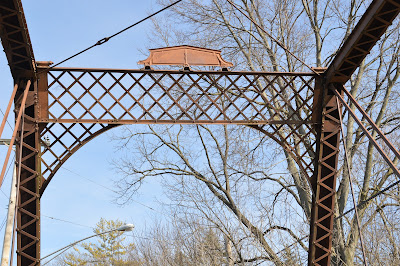 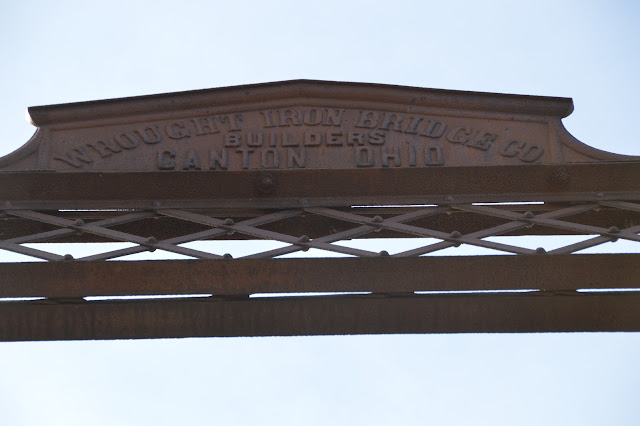 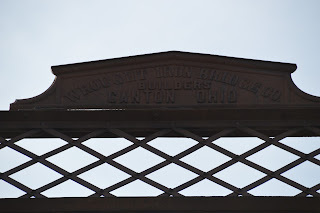 There has to be a story behind these bent bars. 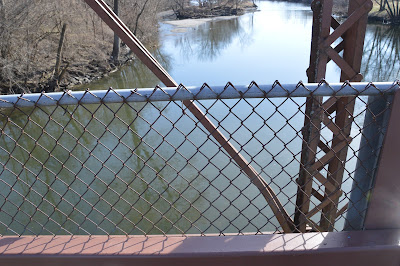 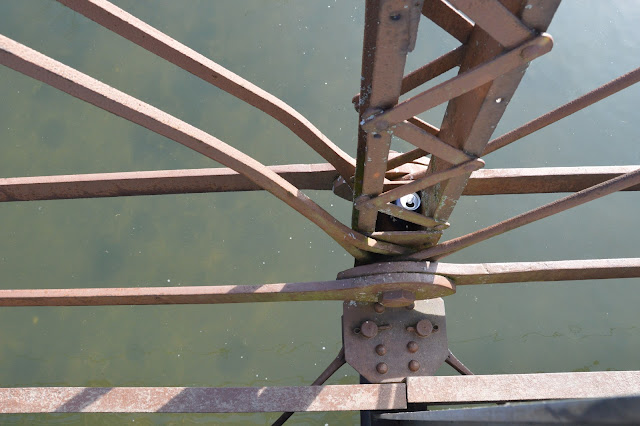 The above photo also shows how the end of the tension members have a loop instead of the usual eye. It also shows how some people will go out of their way to litter. Almost every joint an upright and its floor beam had at least one can in it. The following diagram provides the appropriate terminology for the tension members. The bottom chords, which are bigger, are eye-bars whereas the diagonal members, which are smaller, are loop bars.
You can tell this is a different joint because it has a different can stuffed in it. This one is closer to the center because the bottom cords are bigger on the right (towards the center) than the ones on the left. And the diagonal members get smaller as we go towards the center of the span. 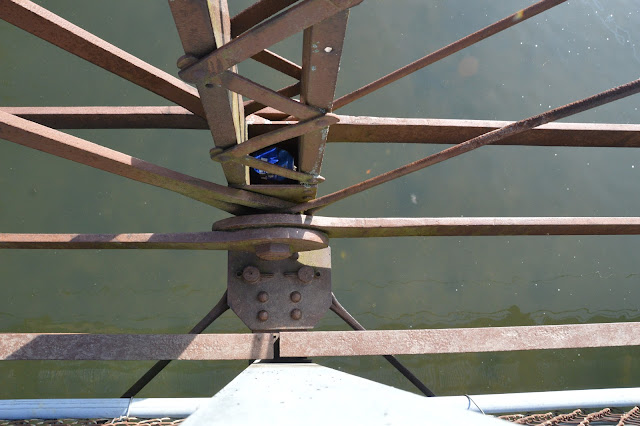 Since we are close to the dolostone quarries in Joliet and Lemont, it is no surprise that the bridge abutments are made with cut stone. These are the west and east abutments, respectively. The HAER report indicates the stones are 3' deep. 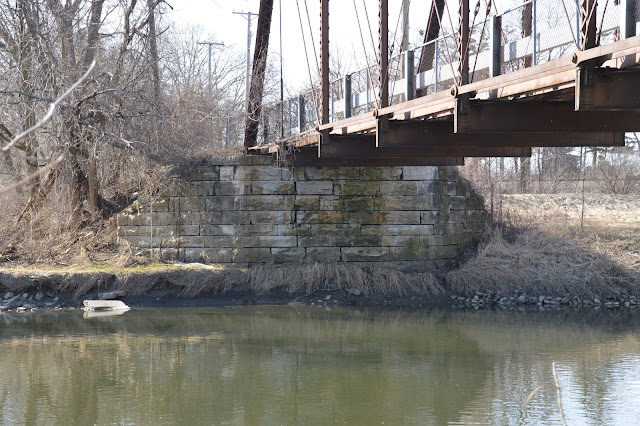 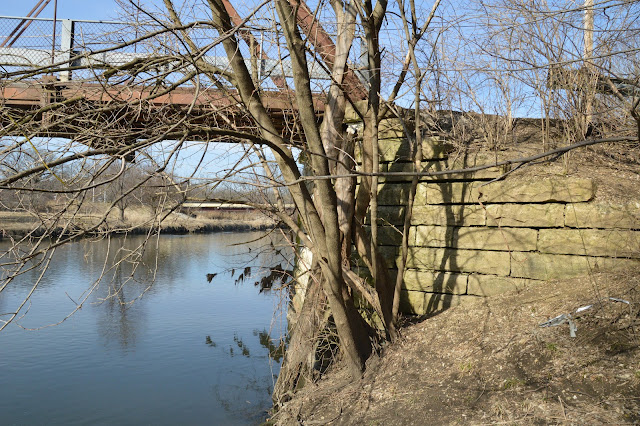 The HAER report observes that there is no knee bracing. I think knee bracing is reinforcement of the joints between the upright members and the floor beams to hold them at 90 degrees during a wind load. In fact, as the report indicates, the joints in this bridge are just pin connected. That is, they have no resistance to bending under a wind load. HAER indicates that knee bracing was introduced around 1890. In the following photo, I was trying to catch how the size of the bottom cords are smaller in the panels that are closer to the abutments. But it also catches how the upright member is connected to the top of a floor beam with just one pin. 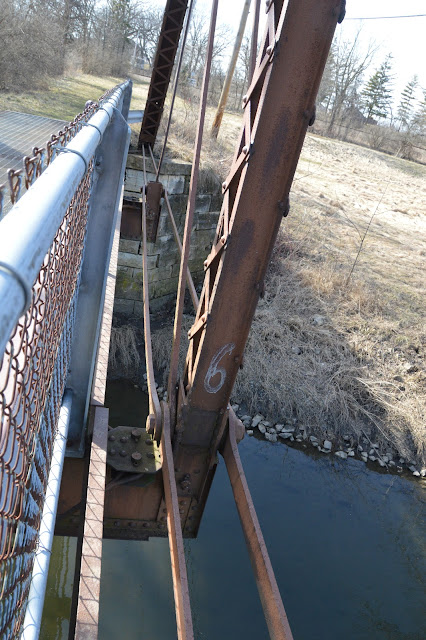 This photo shows that some repairs have been made. 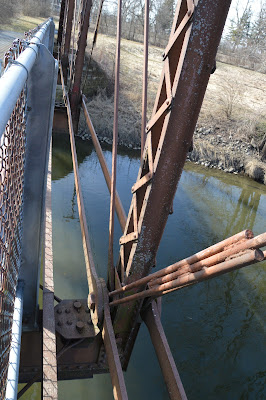 It was obvious that this was a rare old bridge, so I took a lot of photos while I was there. The following is a dump of the remaining photos that I took. 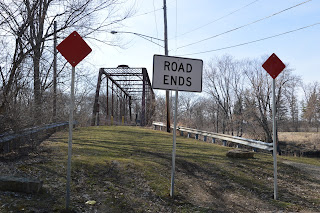 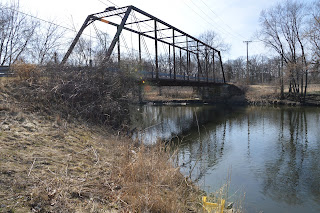 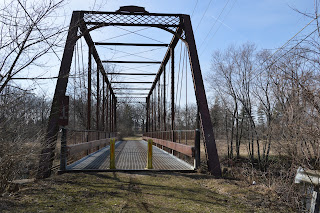 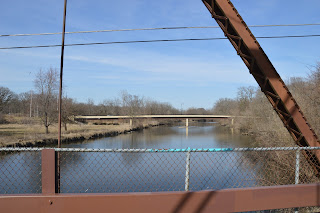 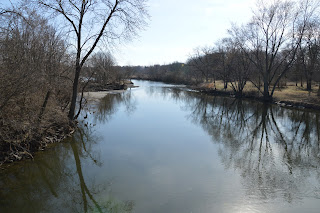 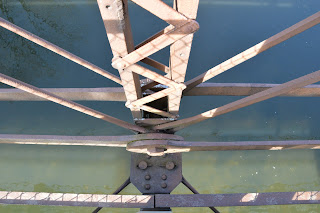 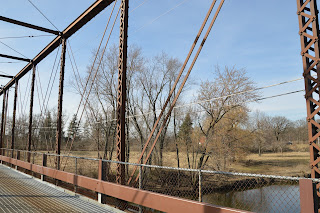 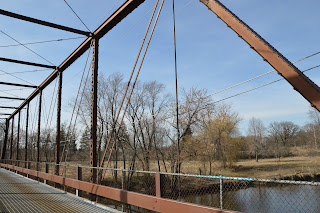 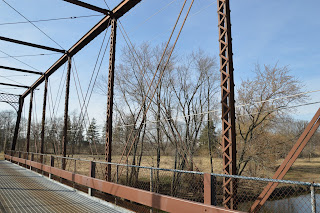 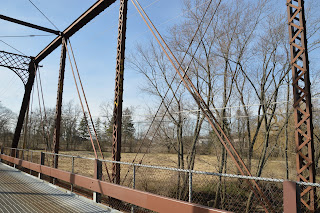 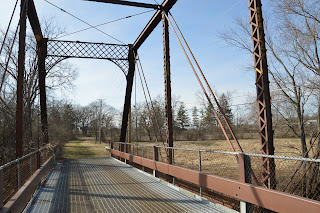 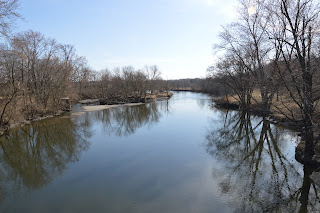 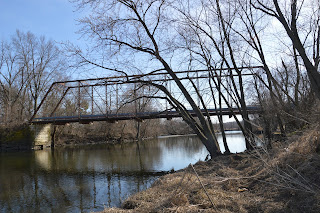 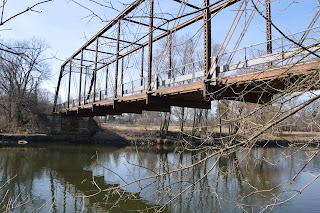 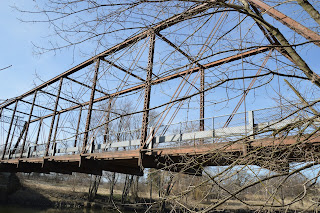 When the HAER record was written in 1995, the plan was to move this bridge for preservation and build a new bridge at this location. Fortunately, for the greater good, homes were purchased so that the new bridge could be in a location that allowed Renwick Road to run straight over the river. Not only did they have to purchase the homes that were in the way of the new alignment, they had to purchase the homes between the CN/EJ&E tracks and the river because they became isolated when the old bridge was closed to vehicular traffic. I captured the Global Earth images before, during and after construction.


Posted by Dennis DeBruler at 10:37 PM No comments: