(Bridge Hunter; no Historic Bridges; Satellite)
MNBR = Meridian & Bigbee Railroad
It turns out the Meridian & Bigbee is the name for this route on my 1928 map AND the current name of the Genesee & Wyoming subsidy.
This bridge carried road traffic until 2000. I was going to pass on yet-another-lift bridge until I saw it went over the Tombigbee River. The new road bridge opened in 2001.
No wonder traffic lights were needed because you couldn't see the other end. Big trucks were not allowed on the bridge so truck traffic to the paper mill on the west side of the bridge had to go a long way around.
Thanks to the road bridge that has been built next to it, you can see the top part of the towers in detail.
While reading the american-rails page on this railroad, I got the following before I finished reading the post. So now I have to think three or four times before I ever access another link going to american-rails. 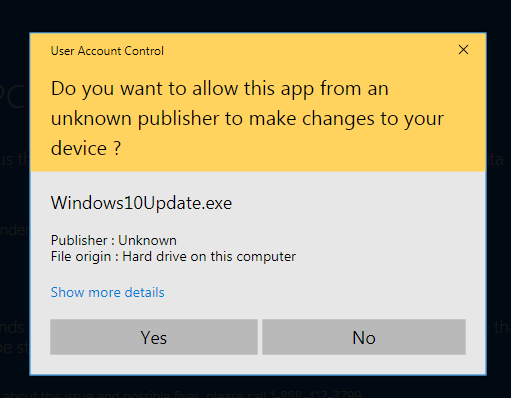 The new MNBR purchased some former L&N trackage from CSX and obtained trackage rights into Montgomery, AL. [HawkinsRails, if you scroll down past the locomotives, there are some timetables.]
Posted by Dennis DeBruler at 10:10 PM No comments:

A combined railroad and vehicle causeway was built in 1893 using a swing span for the navigation channel and trusses for the other spans. But it got destroyed by a hurricane in 1900. The concrete arches we see today were built between 1909 and 1912 to withstand hurricanes. The arches survived a hurricane in 1915, but the earth filled sections leading to the bridge were washed away. When they were rebuilt, concrete was used instead of earth.

The lift span is significantly longer than the 1987 bascule span.

Tom Bell posted four photos with the comment: "Here are some shots for you all. firstly, replacement of the Galveston causeway bridge for UPRR/ASTF/SP/MP, now just BNSF and UPRR joint trackage." 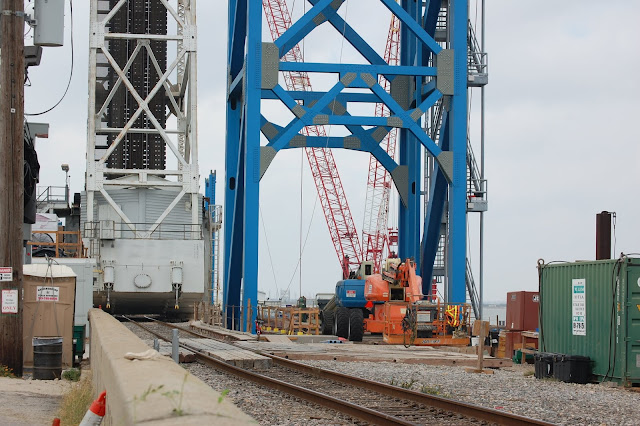 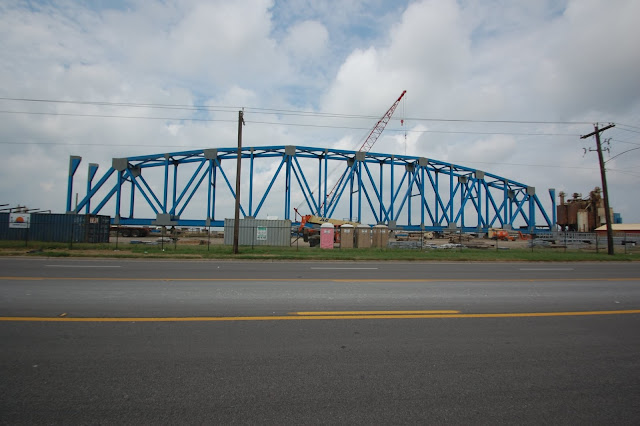 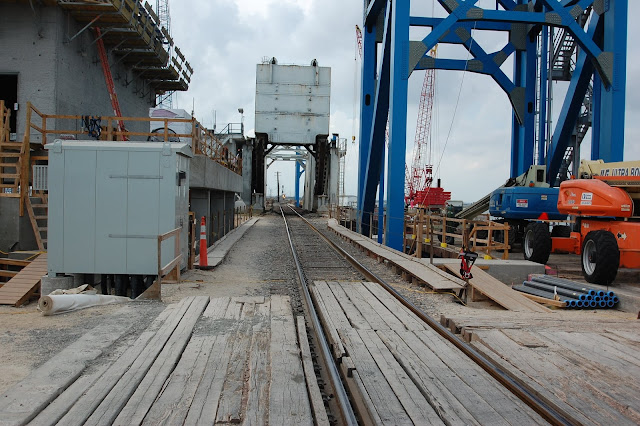 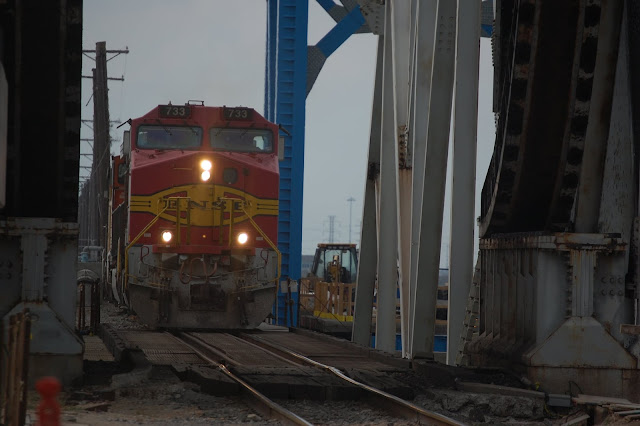 The 1912 movable span was designed by Scherzer Rolling Lift Bridge Company.
The 1987 movable span was designed by the American Bridge Division of US Steel (Chicago Engineering Office). I-45 was replaced in 2003 and 2008 to widen the shipping canal and to provide 8 lanes of  traffic.
The 1987 span was moved to California to replace a swing bridge. According to the comments, it is the Haystack Rail Bridge that is being replaced. But it still (accessed 2020) has the swing bridge in the satellite image. Of course the satellite images have a delay. That span would have been an interesting load going through the Panama Canal.
The concrete arches were built between 1909 and 1912 to withstand hurricanes.
Public Domain: Published Prior to 1923

The concrete arches do appear to have passed the test of time.
I wonder what those new I-45 causeways cost. It doesn't look very crowded. I assume the traffic level depends on tourist season and hurricane evacuations.
I've remembered that concrete was a bleeding edge construction material at the beginning of the 20th Century. At four miles long, I wonder if this was the biggest project at the time in terms of the quantity of cement used. The arch strikes me as rather flat. I believe that would generate a lot of horizontal compressive force. That would have the advantages of pre-stressed concrete. Specifically, temporary tensile forces introduced in the structure by waves, etc. would not offset the internal compressive forces so that the concrete would remain in compression. That made me wonder if they could skip adding rebar. No rebar would explain why it has lasted so long even though it doesn't set very high above salt water. But these diagrams show that they did use rebar.

Given how tight two barges fit through this bridge, getting a standard tow of 3-barges wide through this thing must have been very exciting. Replacing this bridge with a high bridge that doesn't obstruct traffic was needed.

I never realized that Cedar Street was a cantilevered truss until I saw it in the background of the above photo.
I labeled these notes with "bridgeStrauss" even though Cedar Street is not the usual Strauss trunnion bascule design because he was the designer of this bridge. "It is interesting to observe the main span of this bridge. The way the cantilever arms meet in the middle [with a hinge], the way that the main span span has an arched shape, and the configuration of the truss as a Pratt all are similar to what you would find on a bascule bridge like the Jackson Boulevard Bridge. Perhaps we can see the influence of an engineer whose experience was with bascule bridges here in this fixed bridge?" The anchor arms use Warren, instead of Pratt, trusses. "In 1933, this bridge won the prestigious award of Most Beautiful Steel Bridge from the American Institute of Steel Construction."  [Historic Bridges]

KB&S/(Big4+NKP(LE&W)) Bridge over the Wabash River at Lafayette, IN

(Bridge Hunter; no Historic Bridges; 3D Satellite)
I've seen this view a few times but ignored it because it is yet another truss bridge. But I've decided that about the third time is a charm.

C Kent McKenzie posted seven photos with the comment: "Derailment today (9/21/2022) with significant damage to this old bridge in Lafayette, IN. This is a spur that runs west from the NS mainline, just south of the Amtrak station, next to the South Street bridge. I've seen speculation in other groups that this won't be repaired, as there is an alternate rail route to the served industries. Photos by Clayton St Martin."


Brian Pruitt posted four photos with the comment: "Lafayette Indiana:  Kankakee, Beaverville and Southern Railroad. Tracks failed while pushing rail cars for storage. I formally nickelplate, conrail then NS rail bridge."
Eric DeHaan: How many cars got across before it fell in? Going to be interesting getting that fixed/who fixes it and get the cars back lol.
Brian Pruitt: Eric DeHaan I haven’t gone down there yet, but looks like three railroad cars that Norfolk Southern was going to store on kbs rail line for the Nucor steel plant in Crawfordsville.   Now it’s Norfolk Southern’s bridge and owns X amount of feet on the other side. It will be NS that will fix it.
Dan Kleinhenz: Looks like they were loaded with pig iron briquettes.

Posted by Dennis DeBruler at 10:01 PM No comments: