(Bridge Hunter; Historic Bridges; HAER; Satellite)
The piers may date back to 1840. They are certainly older than 1893. 1893 is when the new steel trusses were built because a train wreck took out both the rail (upper) and wagon (lower) decks in 1892.
The plaques posted on the trail by the Old Railroad Bridge are the best (concise) history I have come across. It is too bad that I could not find this text on their web site.
This 1936 topo map indicates that both Southern and L&N used the bridge.
When they built the new 110' x 600' x 100' lock in 1959, they also built a wider canal that took some of the bend out of the downstream entrance and they forced the replacement of the swing span with a lift span by 1963.
In 1993, Norfolk Southern moved this lift span to their Wabash bridge over the Mississippi River at Hannibal, MO.
I labeled these notes "bridgeRare" because Nathan Holth (Historic Bridges) said so. Specifically: "the surviving spans are rare double-deck, pin-connected Warren truss spans." I don't think double-deck bridges were rare back then because an accommodation for wagon traffic was typically included when a railroad bridge was the first bridge across a major body of water. Although it was more typical to add the wagon decks on the sides rather than underneath. I think what is rare is "pin-connected Warren" trusses. Pin-connected is an old truss construction technique whereas Warren trusses are a relatively new truss design. Most pin-connected trusses used the Pratt design. This photo gives us a good view of the truss and its pin connections as well as the cut-stone piers.
More evidence that 2019 was very wet in the US. Note that the water is at the top of the dolphins that are downriver from the end of the bridge.
This shows that when the water is near the top of the dolphins, it is also near the top of the crossover of a main pier (upper-right corner) for the O'Neal Bridge.
This photo confirms that we can normally see much more of the dolphins than just the plants growing out the top of them.
Another view that includes the dolphins. To the left of the dolphins is the Florence Canal that goes to the Wilson Locks.
This photo shows that some of the cut-stone piers have had extensive repairs, but not all of them. I didn't notice the concrete coated piers in the other photos.
Posted by Dennis DeBruler at 9:23 PM No comments:

1924 #1 Lock and Dam on Florence Canal near Wilson Dam

(Satellite, was made obsolete by a 100' lift lock at Wilson Dam)
Like Keokuk Dam, the Wilson Dam was built to provide hydroelectric power before the 9' inland waterway system was created. Unlike Keokuk Dam, which was built with private money, the Wilson Dam was built by the Federal Government to help create nitrates for explosives for WWI for $130m. Of course, by the time the dam was done, the war was over. TVA acquired these assets and converted them to fertilizer research and production. Lock #2 was at the upstream end of the Florence Canal next to the Wilson Dam, and it was a double-lock that provided most of the lift. But there was a Lock #1 at the downstream end of the canal that provided some additional lift.
It is Lock #1 that we see in this photo.
This is the original double-lift Lock #2 by the dam.
Posted by Dennis DeBruler at 8:37 PM No comments:

(3D Satellite)
The 1963 road across the top was removed in 2017 because a UCEB (Ugly Concrete Eyesore Bridge) replaced it.
The lock is just 360' x 60', but it has a 70' lift. "Fort Loudoun Dam is a hydroelectric facility. It has four generating units with a summer net dependable capacity of 151 megawatts. Net dependable capacity is the amount of power a dam can produce on an average day, minus the electricity used by the dam itself." [TVA] When built, the dam had a nameplate capacity of 144.5 MW. [GEO] The turbines have been upgraded because the current nameplate capacity has to be higher than the net capacity of 151 MW. And because a photo below shows one of the old turbines is on display. Upgrades began in 2008. [news-herald]
The lock can hold just one jumbo barge and its towboat.
The gates are still opening in this photo. And we can see the new bridge.
This May 2018 capture shows the new bridge exists and the road across the dam has been removed.
The current Google Maps satellite image is rather old because the switch between old and new bridges was done in July 2017 and cost $71m. The TVA refused to let the old bridge stand as a trail bridge because it "deemed the structure unable to withstand a cataclysmic flood or earthquake and too costly to upgrade its construction." [KonxNews]
The new US-321 bridge took a lot of curves out of the road.
Philip caught the dam spilling water. This is another reminder that 2019 was "wet" almost everywhere in the US.
Note that they sometimes fine tune the spillage.
When the dam is not spilling water, boats get rather close to the outflow of the power plant.

They also dammed the Tellico River to force the water from that river to flow through the hydropower plant.
As part of that river diversion, they also dug a short canal between the rivers.
Posted by Dennis DeBruler at 11:15 PM No comments:

(Bridge Hunter; Historic Bridges; HAER; Satellite)
This bridge is an eyebar suspension bridge. Historic Bridges explains that, unlike the Silver Bridge that collapsed, this bridge uses a lot more eyebars in a bundle so that any one eyebar failing is not catastrophic. That is, unlike the Silver Bridge, this bridge uses the redundant design that was developed in England.
Historic Bridges also explains the asymmetric design of the bridge. Specifically, the anchorage and abutment of the east end are separated. The cables are anchored on a nearby hillside and the east span is not suspended at all.
Historic Bridges also noted that the top chord is omitted at the center of the suspended span, which gives it a notched look.
The bridge was bypassed in 1988 by a UCEB (Ugly Concrete Eyesore Bridge). Thumbs up to ODOT for not tearing it down. Thumbs down to ODOT for not letting pedestrians on it.
(new window)  (source) Drone views start at 17:22.
This bridge replaced the first suspension bridge built in Ohio in 1852. The bridge was destroyed by a flood in 1913.
This view shows the "hillside anchorage" very well.
Posted by Dennis DeBruler at 9:43 AM No comments:

CSX/C&O/HV and (NS+CUOH)/Pennsy Bridges over Olentangy River in Columbus, OH

(Bridge Hunter HV; Bridge Hunter Pennsy; Satellite)
HV = Hocking Valley
CUOH = Columbus and Ohio River Railroad
Bridge Hunter labels the Pennsy bridge as CSX. But both the 2005 SPV Map and a contemporary USGS map label it as Norfolk Southern.
I'm documenting these two bridges together because they are so close that it is hard to get a photo of one without getting the other. This view is of the CSX/HV truss from under the NS/Pennsy plate girder bridge.
A trail goes under the west end of the bridges. Because of the trees, as I approached the northern (HV) bridge from the North, it was not possible to get a view of the entire bridge. But I could get a good view of the west end. 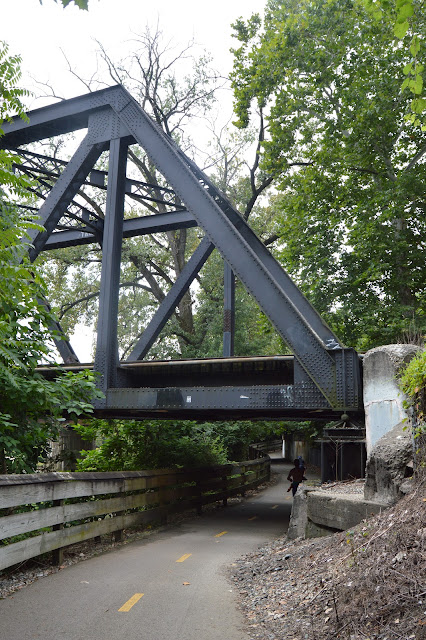 And a good view of the underside. The plate girder bridge on the right is the Pennsy bridge. 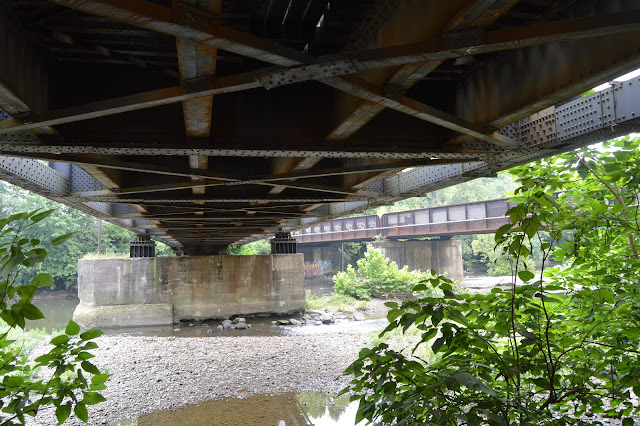 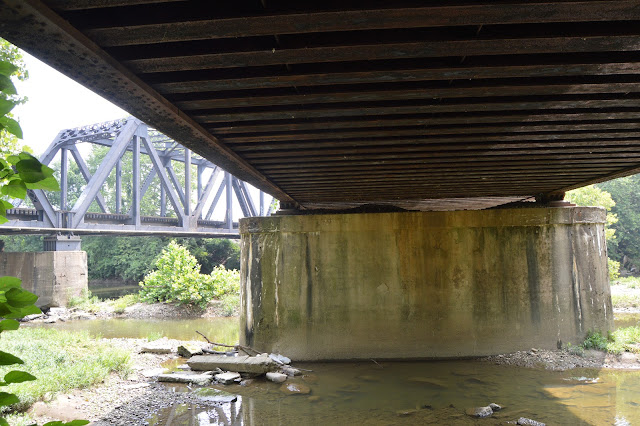 I took this view  because of the rails lying in the river. 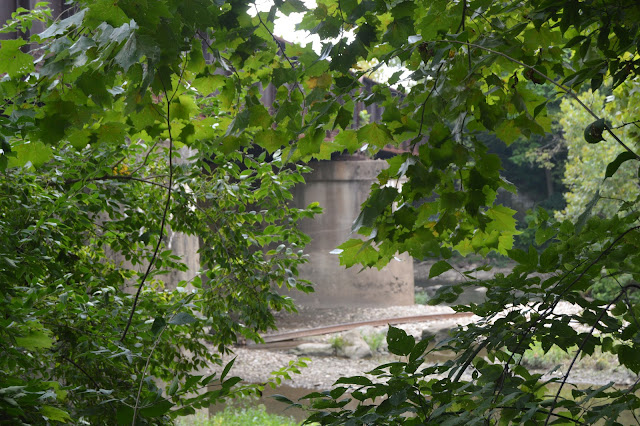 I then got a closeup of a girder. 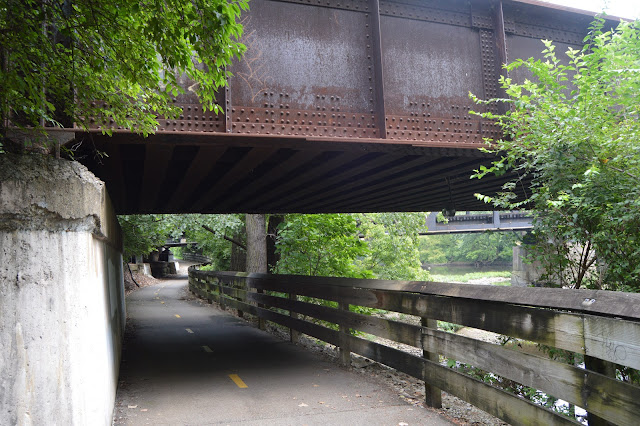 The river was low so I was able to get this downstream shot of the Pennsy bridge in front of the HV bridge. The more I look at  the photo, the more birds I see taking off from the river. Note the Goodale Street Bridge peaking out from under the left truss span. 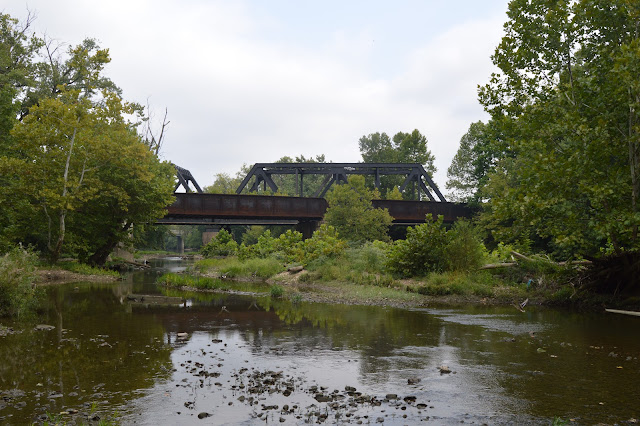 This is a view looking South from that road bridge. 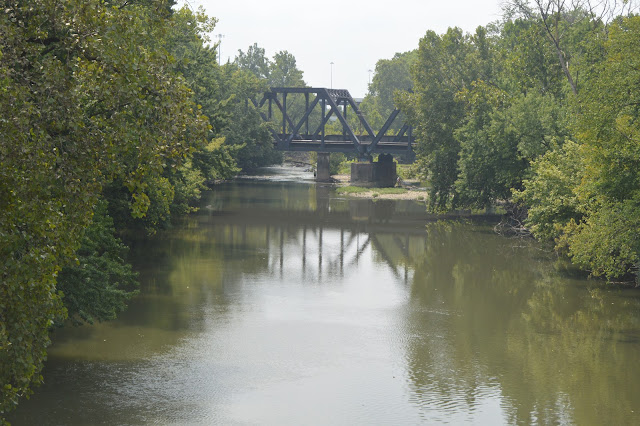 Posted by Dennis DeBruler at 9:39 PM No comments:

(Bridge Hunter; John A. Weeks III; Satellite, just a remnant is left as a public fishing pier)
When the bridge was finished in 1897, this Great Northern Bridge was the first bridge across the harbor and bay, and it also carried wagon traffic. Note the deck stringers extend beyond the edges of the truss to cantilever the traffic decks. Traffic was moved to the Blatnik Bridge in 1961. Since the railroad quit using it before 1961, the remainder of the bridge was removed in 1971.
Attitudes toward safety were different back then. Notice that there are no handrails!
One of the three trusses was kept for a fishing pier.
The swing span in the background of this photo is part of the Interstate Bridge.
A video describes this bridge starting at 4:05.
Posted by Dennis DeBruler at 1:40 PM No comments: