(Bridge Hunter, Bridge; Bridge Hunter, Tunnel; no Historic Bridges; 3D Satellite, 154+ photos)
This HAER record is for the nearby Snowden Bridge. I include it because these two bridges have a similar design and the HAER includes several interior shots of the lift machinery.

A view of the bridge with a more typical river level.
This photo shows the different high water marks on the pier. The current flood level is near the top of the ice-breaking slope. That makes it higher than any of the previous watermarks on the pier.
Note the bluff at the other end of the bridge. That is where the tunnel is.
The tunnel has a curve.

Posted by Dennis DeBruler at 11:04 PM No comments:

(John A. Weeks III; Satellite, 44+ photos)
John lives in the area, so his page has many photos of the dam from various angles and river levels. This is a small sampling of his photos and commentary. 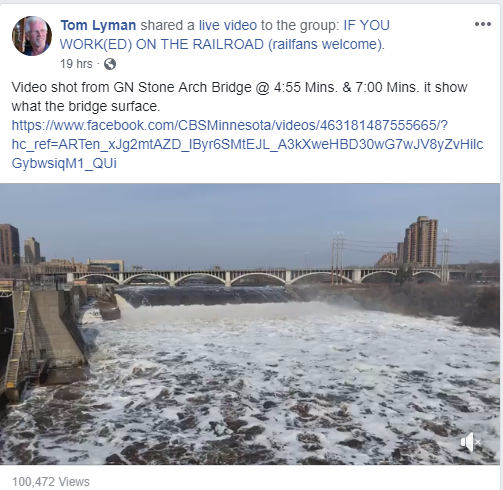 Just downstream from the lock

Posted by Dennis DeBruler at 8:22 PM No comments:

(Update: I made a second trip and caught them loading boom segments onto truck trailers.)

I've been seeing some postings of a Manitowoc MLC 300 next to I-294. So on the first clear day of this year that wasn't cold and/or windy, March 26, I made a trip up there to check it out. It is working on a Microsoft building. I got there before 3pm, but they had already stopped working for the day. However, the trip was not in vain because I did want to get photos of the crane with a long luffer jib in its parked (jackknifed) position.

I started from the side of the building where I could get a clear view because there was a gate in the fencing. Turner is the contractor. 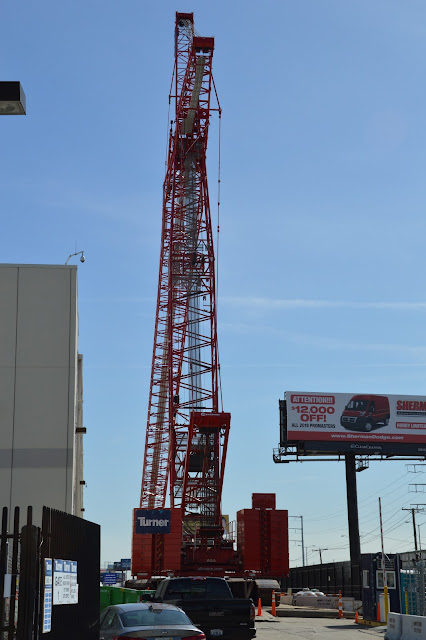 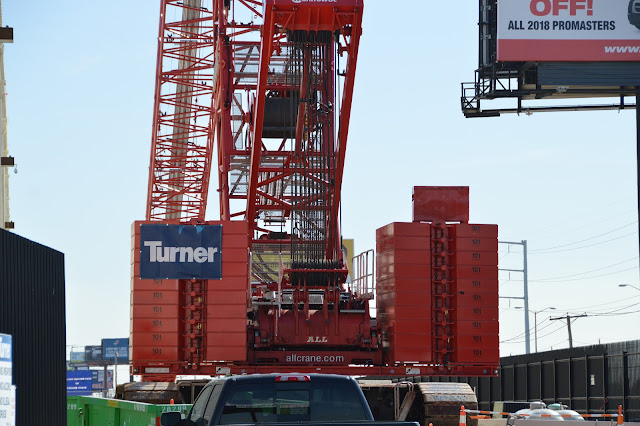 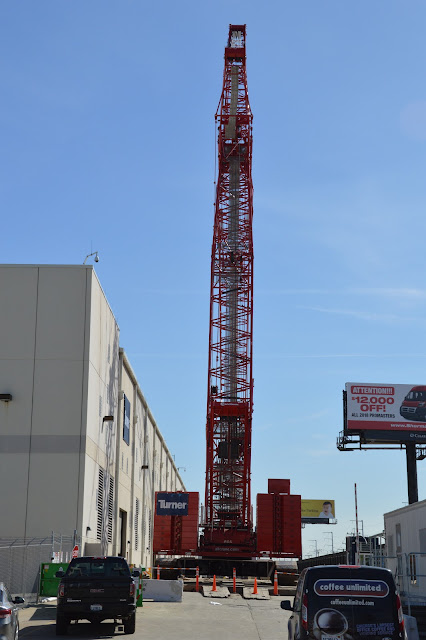 I then walked across Northwest Avenue to get some distance from the crane so that I could get some overview shots. I repeat the photo at the top of these notes to put it in context. I had to move around to find an angle that included the whole crane with my zoom's widest angle of 18mm, to reduce the glare off the boom, and to clear the billboard. 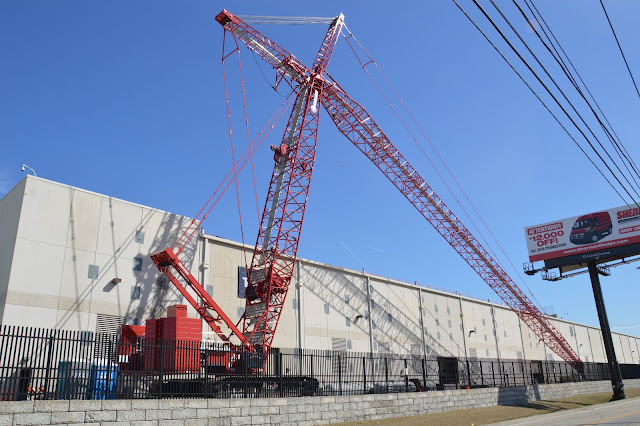 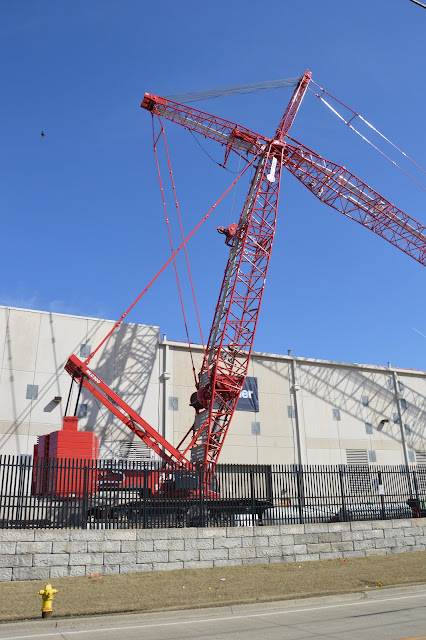 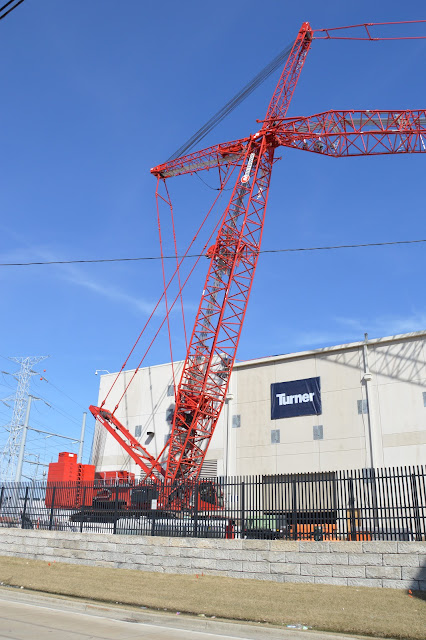 At the other end, I crossed Northwest Avenue again to try to find an overview that was clear of the billboard. 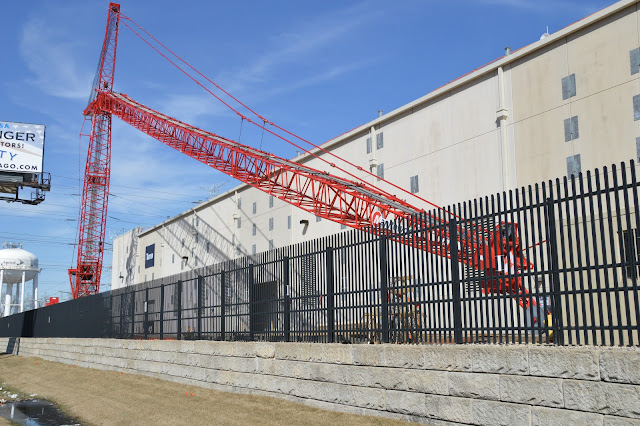 I'm including this "bad" view. Even though the main boom got skunked by the billboard, this angle has a better view of the wheels on the tip that are needed if they want to lower the main boom all the way down to the ground. 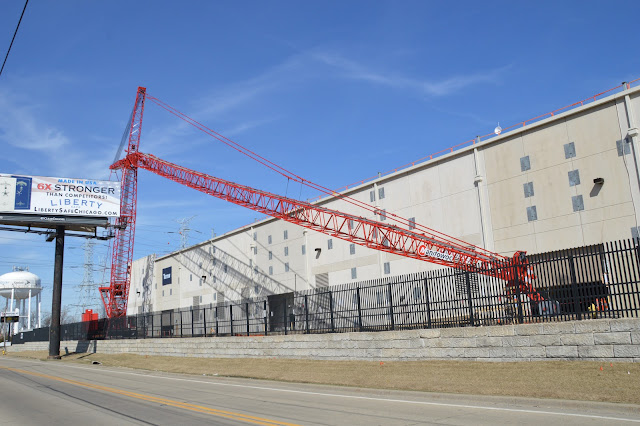 I took a couple angles of the main part of the crane as I walked back. I've learned with truss bridges to take multiple angles because sometimes a truss member will hide something you want to see in a view. And the fence is a hassle. 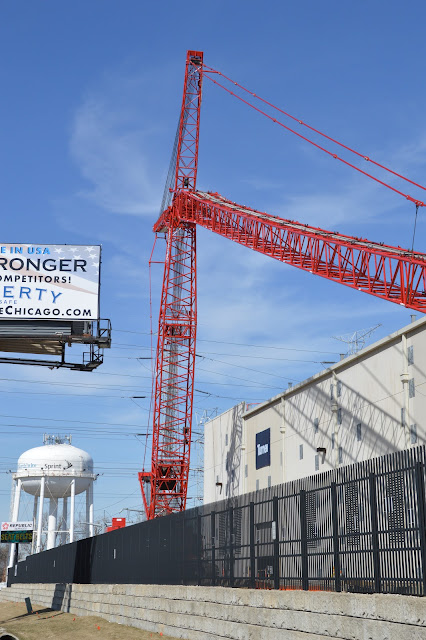 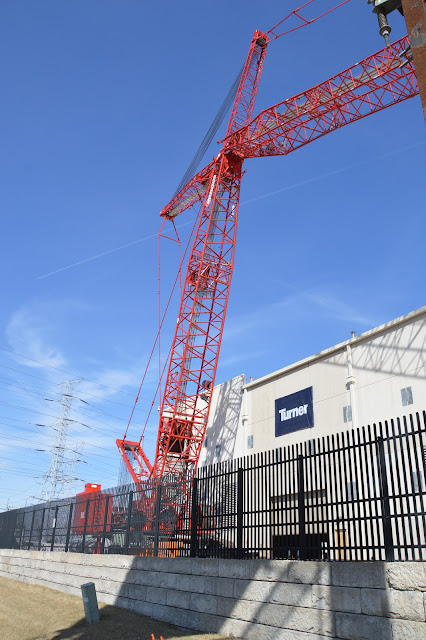 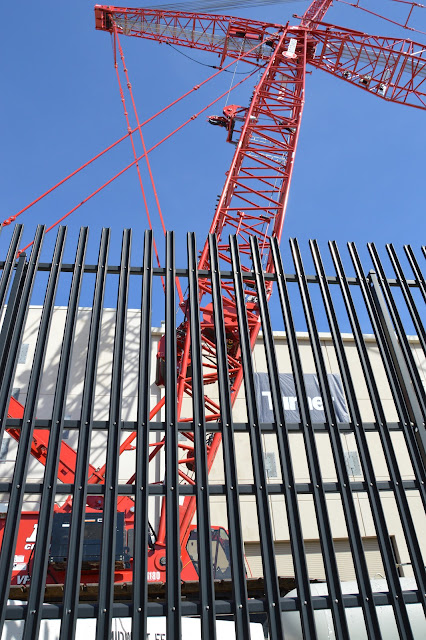 In this close up, we can see that the hoists are mounted in the base of the boom. This allows the designers of the crane to reduce the weight of the housing so that it is cheaper to transport it over the road. (It is still probably expensive. But it is cheaper than it would be if all of the hoists were still in the house.) We can also see the 300 of the MLC300 label so I know it is not a MLC650. 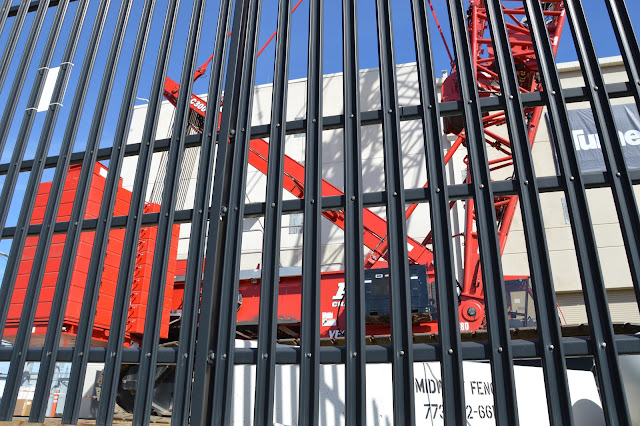 In this view, I was trying to get most of the hydraulic hoses that power those hoists to show between the fence posts. 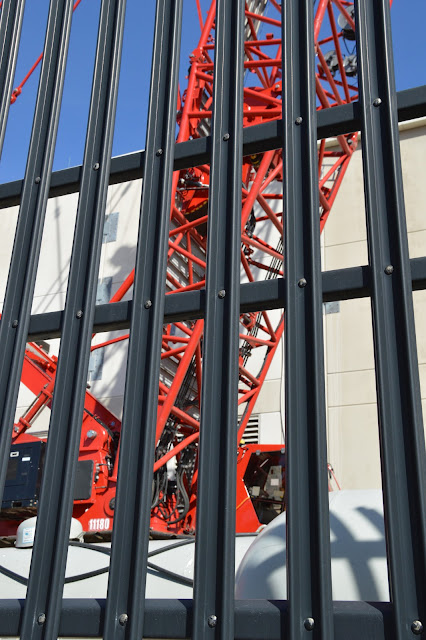 With this angle, I'm trying to show the loop in the VPC "chain." 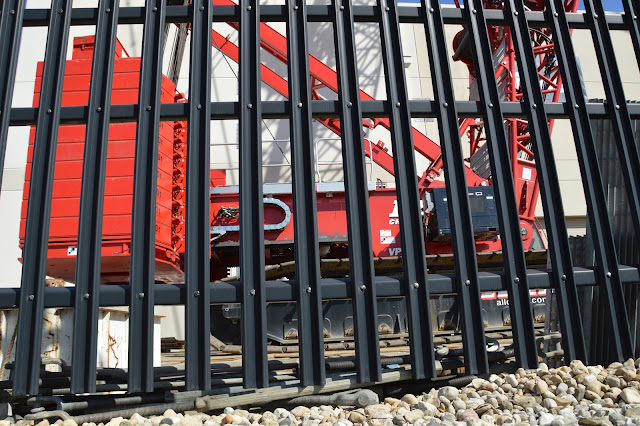 I was going to skip this first closeup photo I took, but now I see that it confirms the purpose of the "chain" is to organize and protect all of the hydraulic hoses that go to the counterweight tray. 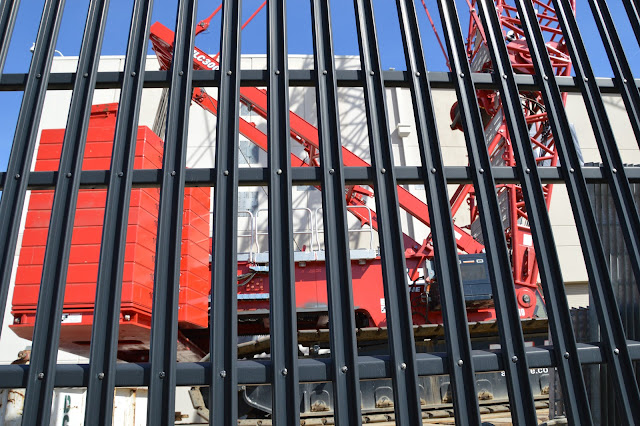 It appears they are adding HVAC (Heating, Ventilation, and Air Conditioning) equipment on the roof. 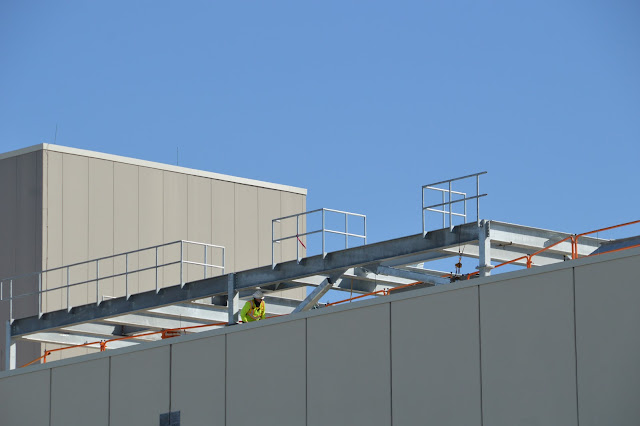 A couple of days after I took my photos, John Schilberg caught it parked at the middle of the building instead of at the north end. One advantage of this job compared to windmill erection is that they are walking the crane on a paved surface rather than on a farmer's field.
Elaine caught it working:
I posted three photos from this blog with the question: "What does the box on top of the right counterweight stack hold?"
Thomas Cassidy The box on top holds the beckets and 2 block weights and stuff like that.
Derek Huss That box is a tool box our 300mlc had beckets and some pins in it
This is one of the posts that let me know there was some interesting action next to the I-294.
David Hall posted three photos with the comment: "Seen this little fella by rosemont."
John Craig Weir Not Rosemont in Northlake I believe. 294 North Bound.
John Craig Weir Microsoft Data Center when it was originally built.

While driving east on North Avenue, I discovered that a Manitowoc 2250 luffer crane is helping to build a new building between Foxy Nail and a Shell station. 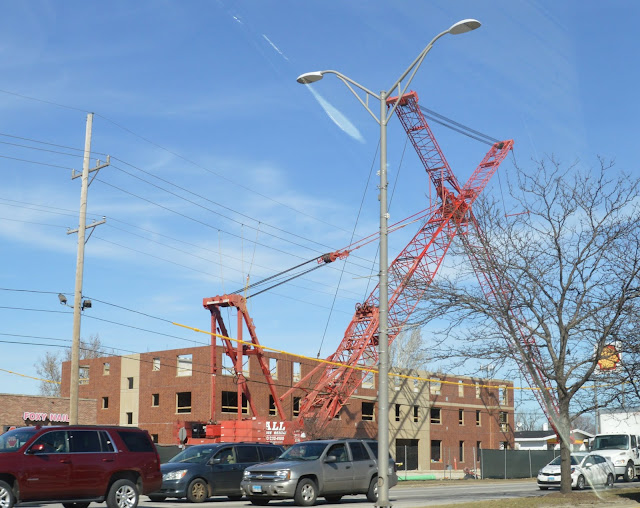 
Most of my notes that have the "engeryElectric" label are concerned with the generation or transmission of electricity. In this case, it is about the consumption of electricity. There are no signs on the building indicating who owns it, but Google Maps labels it Microsoft.

I included the transmission switchyard west of the Microsoft building to help illustrate that the building is just south of the significant power transmission corridor shown below. Power is transmitted using three phases, so three wires are needed for one circuit. Using my notes on ComEd voltages, Each tower is carrying two 345kV circuits and the middle and southern towers have an extra cross arm at the bottom to carry a 138kV circuit.
That corridor is so big that Republic Services built a transfer service under the power lines. There were enough garbage trucks entering and leaving the facility that I had to wait a while to find a gap in the traffic to cross their driveways from where I was parked.
At the north end of their building, Microsoft has a switchyard that is larger than what most towns have. And on the east end is probably some backup generators.
There are two 138kV circuits feeding this switchyard This Street View shows that the western circuit is connected to the middle transmission line and the eastern circuit taps the southern transmission line. I'm sure that either circuit can supply the needs of the building. They use two circuits for redundancy.

The name Microsoft, the proximity to lots of electricity and fiber optics, high security (no signs), and lots of HVAC units on the roof tells me that this building houses a server farm. That is, it is full of computers. Server farms need a lot of electricity to power the many processors that are in the building. But all of that power ends up as heat, so they also need a lot of power for air conditioning to remove all of that heat.

Judging from the HVAC units on the southern half of the building, Microsoft planned for growth and they are now finishing the northern half.


Posted by Dennis DeBruler at 10:26 PM No comments:

This is a win-win posting. It not only shows the impact of the 2019 flood, it documents a double-lattice truss bridge that is soon going to be replaced. Note in the satellite image that the two eastern spans are normally over land. In these photos, water is under all four spans.

A street view shows us a more normal river level.
Chris C J Johnson posted 20 images with the comment: "Built in 1900 for The CRI&P the Booneville, Iowa Bridge over the Raccoon River will be replaced by IAIS in the Summer of 2019.
High Water•3/17/19"

I did not include the last two images because I recognized them as a copy of John Marvig's work.

The bridge is being replaced. Saving the satellite image because the truss has nice shadows and is probably going to disappear.

The videos show the caisson sheet being turned.

I don't know what they are doing here. It is obviously of a smaller diameter. Note the poured caisson with rebar sticking out doesn't have any steel around it. Can they pull the steel shell back out and reuse them? Or did they cut off the top?

The above must be drilling a pilot hole because I think this is in the same location.


Chris C J Johnson posted some photos with the comment: "IAIS/CRI&P Bridge Replacement Booneville, Iowa May 9, 2020"
Chris C J Johnson shared
Chris C J Johnson Built in 1900 by the Chicago Rock Island & Pacific Railroad (CRI&P) and now used by The Iowa Interstate Railroad (IAIS).
Located just 1/4 mile West of the small town of Booneville, Iowa this bridge and its four trusses spanning 632 feet cross the Raccoon River.
Progress vs. History.
After 119 years-A new bridge will be built on the Southside of the old bridge and the old bridge will be demolished.
This Facebook group is “Public”
Please feel free to invite your friends to this group and you are welcome to share all postings.
C JMike Brady Any builders plates on it, hate to see all these truss bridges scrapped.
Chris C J Johnson Mike Brady My understanding is that IAIS is replacing and demoing them all...2019 it was the 1800’s era bridge over Walnut Creek in DSM.
C J

When I noticed that a pier seemed to be slanted in one of Chris' photos, I looked for it in street view. Srue enough, IAIS had to repair a pier damaged by the 2019 flood.

The new railroad bridge was needed as the truss bridge had met the end of its functional use. Two of its piers had tilted due to years of flooding and erosion. Others had cracks and were spalling. The new 661 foot multiple-span bridge will carry train traffic of up to 40 mph- double of that of the railroad bridge)- and trains will be able to carry taller and heavier loads. The $3.5 million project was half funded by the federal government through the Federal Railroad Agency through the use of Consolidated Rail Infrastructure and Safety Improvements (CRISI) grant. It took only 17 months to build the new span. It’s part of the 20+ year project to modernize the entire line and will include additional bridge replacements in the future, including three bridges in Davenport- the 3rd and 4th Street Overpasses and the Arsenal Bridge. [BridgeHuntersChronicles]