When I stopped by the Joliet Amtrak platform to see if my uncle and his friends were still railfanning, I noticed that an outbound Amtrak train was arriving on the CN+UP/GM&O tracks. It was going slowly enough that I waited for the text on the sign to scroll to "This is Joliet." to take my first picture, which is facing North. Note that the signal heads are turned sideways. This is because the route was converted to the new Positive Train Control signals a few weeks ago.

Because of the Superliner cars, I assumed this train was the Texas Eagle. According to the Amtrak schedule, the Texas Eagle is due at Joliet at 2:40pm. Since the time stamp on the following picture is 2:50pm, I believe the Texas Eagle assumption is correct.

Below shows the trains first stop so that passengers could load the  front part of the train. You can see that there is construction in progress. The Amtrak platform is being moved from the west side of the tracks to the east side of the tracks so that the passengers do not have to cross the BNSF/SantaFe tracks to get to the CN+UP/GM&O trains. Note that the "dome car" is still north of the platform near the old signal bridge. 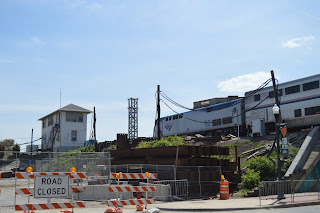 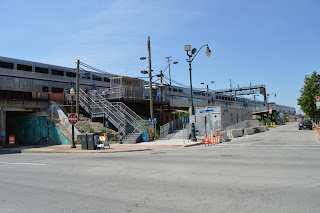 The train then pulled forward and stopped again with the rear part of the train at the platform at 2:55pm. The "dome car" is now south of the platform. 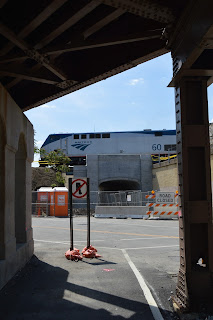 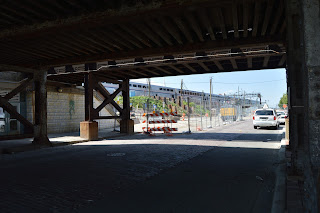 It then left the station at 2:59pm. So it left the Chicago area about 20 minutes behind schedule. 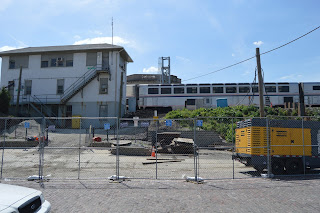 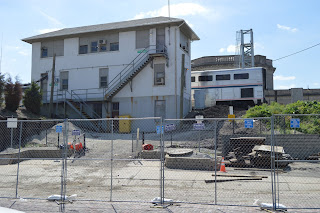 While I was getting portal pictures of the Canal Street RR Bridge, which is south of the 18th Street Viaduct, I noticed train movement north of the viaduct. There was an Amtrak train backing down the BNSF/CB&Q tracks under the St. Charles Air Line viaduct to the 16th Street yard. 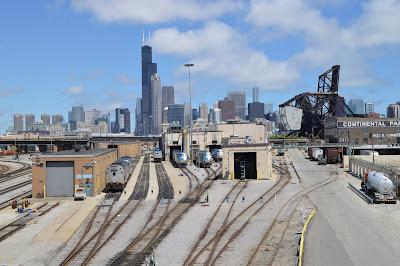 Since I knew that as soon as it had traveled far enough to the west to clear the switch it would come forward towards me, I killed some time taking pictures of the Amtrak service area. This used to be the Pennsylvania coach yards. After about 5 minutes, the train appeared again on the Jefferson Connection.

I then crossed to the south side of 18th Street. The train went far enough south on the Metra/Pennsy route to clear the crossing as well as the turnout. In the left photo below, the turnout is still aligned for the main. In The right photo, the turnout has been switched to the service track.


The picture on the left is after it started backing up. Note that the crossing gates are down again. Also note that I caught an El on the Orange Line. The picture in the middle shows that it is using the western service track. The final picture is the last one I got before my camera refused to take more pictures because the battery was low. (The camera manual says it well flash a warning when the battery is getting low, but I have yet to notice it.) I had planned on taking more pictures including pictures back on the north side to record that the train was being shoved into the wash rack.

I had forgotten about this posting and wrote some more about turning this train when I described the Jefferson Connector. The postings are different enough that I'm going to let both remain.

Posted by Dennis DeBruler at 2:50 AM No comments:

This is Bridge 407. But I don't know if that is Rock Island's or CSX's number.

As a satellite image illustrates, the former Rock Island crossed the Des Plaines River at about a 45-degree angle. Note the above photo frames the next upstream bridge --- Jefferson Street Bridge.

Note that this RR bridge, like the one CSX operates in Seneca over the Illinois River, is normally in the raised position. 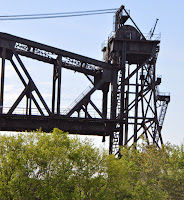 The span being kept in the raised position is nice because otherwise it would be totally blocked by the trees.

I experimented with "artsy" photos using truss members of the McDonough Street Bridge to frame this bridge. 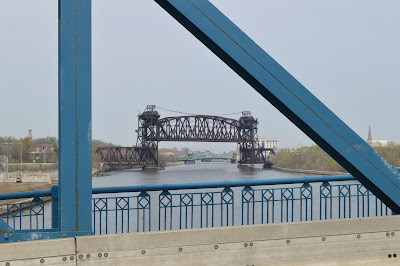 I went from 4:30 to 8:00 on the longest day of the year to try to catch a train during daylight. I didn't get a train, but I did get some river action. Also the sun was in the north part of the sky so that when it peaked out, this side of the bridge was lit up.

Note the McDonough Street Bridge is going up for this downbound towboat. 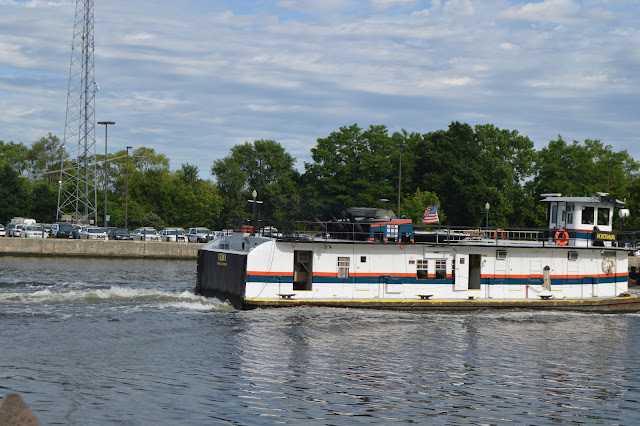 The sun finally came out really bright. And I was trying for a different angle so that the front trusses did not align with the rear trusses.

Dillon Harrison posted two photos with the comment: "After blocking a couple of grade crossings on the West side for about a half hour, The 153 was given its block to the EJ&E crossing from Bridge 407."

And a view of the east portal. I didn't realize that a former industrial spur ramp made this side accessible.

Jeremy Hylka caught a picture of the bridge as the sun rose beneath it.

A video using a drone to get overview and side views of the bridge.

A video of a Rock Island freight coming over the bridge.

Peter Zimmermann also provided more information on how to catch the IAIS train. But that post got removed?! Fortunately, I still have some info in my email:
Peter Zimmermann: The train used to leave around 6:45 pm or so on the weekdays, but then they switched it to not before 7:30 pm for departure out of Blue Island.
Someone else commented that it would not get to Joliet before 9:00 pm.
A portal shot of the west side with a CSX geometry train
11 photos with a video provided in a comment. The bridge starts going back up at 9:08.

Posted by Dennis DeBruler at 2:56 PM No comments: