This was owned by the Southern Railroad so it is now owned by Norfolk Southern.
6 drone photos of a train carrying military equipment crossing the trestle


J. B. Rail shared a similar view of a coal train with the comment:
05/11/2021 - Norfolk Southern Corp train 893 passes over Pope Lick Trestle in Louisville, KY, with empty coal hoppers from Tennessee Valley Authority Kingston Fossil Plant in Harriman, TN, headed back to Fransisco, IN, to get more black diamonds.

Four of the photos posted by Barry Delaney with the comment: "NS 125 at Pope Lick Trestle east of Louisville on Norfolk Southern's Louisville Division."

I like these old manufacturing videos because they consist of just manufacturing scenes. You don't have to watch "talking heads" talk about the usual platitudes such as "listening to our customers and fixing the problems," "process improvement," etc.

Some points of interest:

owen752 weeks ago
Looked around the net and it seems like it got derailed in 1951 due to a defective part, 15 people died and 35 are injured.

That is why ultrasound testing and other forms of non-evasive testing were invented so that each part can be tested for defects before it is used.

Posted by Dennis DeBruler at 5:08 AM No comments:

One of the comments confirms the background is a steel plant:


The site is most likely the coke ovens of the Joliet Iron and Steel Works, which dates to the early 1870s. All operations at the plant ended in the early 1980s. It seems likely the ATSF would have supplied coal to the coke facility, and handled finished steel product in local interchange service and points west.

The bridge is the approach to the EJ&E lift bridge. The coaling tower is in the upper-right corner of this 1939 photo. You can see the bridge that frames the photo near the bottom.

Posted by Dennis DeBruler at 11:43 PM No comments:

(Shortlines, Reporting Mark: CIRY/DRSX) In this blog, searching with the keywords "Central," "Illinois," and "Railroad" produces a lot of false hits. So I'm now including the reporting marks.)

Please follow the "Shortlines" link above for a description of this railroad. Central Illinois operated CB&Q's 1860s industrial park between 2000 and 2010. (In fact, the last day was Aug 9, 2010. [RobertJordan])

Ed has a Flickr photo of their EMD switchers sitting in their yard. His comment taught me that their headquarters was at 918 W. Cermak Road. If you look at a recent satellite image, you will not see a yard. But once again we can use the birds-eye view as a time machine and see where the yard was.
As part of my trip to get pictures of the Fisk Generating Plant before it is torn down, I took quite a few pictures of the BNSF/CB&Q track that is still left in this area.

The branch of the eastern "yard track" that sharply angled to the east with crossing signals and went along Cermak as the Lumber district is now gone.

But the part of the eastern "yard track" that crossed Cermak into an industrial area still exists. However, the crossing signals have been removed and the flangeway has filled up in stretches. Satellite images show the area between the two forks and between Canalport and Cermak to be a storage area. But when I was there in the Summer of 2015, it was vacant land.

These are the six photos I took of the route that Ed's train is on.

They were putting these Blackhawk figures up because we had just won the Stanley Cup. 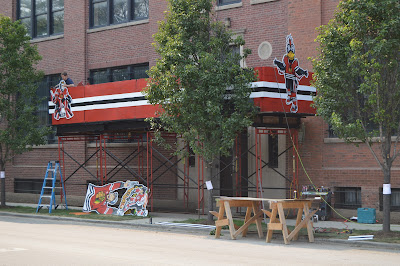 By the time I was done taking pictures of the old BNSF/CB&Q tracks, they were almost done. 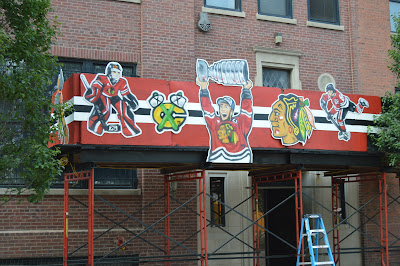 Note the Central Illinois "headquarters" no longer has any rolling stock. It is just a storage area now with a fence. But Google has this labeled Spanish with Salas, so it appears a building is going to soon be built here.

When I visited the area in 2015 to get photos of the track and Fisk, the triangle was just weeds and track. Below is one of many photos I took of the track that is left along Cermak Road.

John DeWit Woodlock II posted two photos with the comment: "DSRX (CIRY) 1208 @ Carpenter Street-Chicago,IL 02 APR 01."
John DeWit Woodlock II I used to drive the 21 Cermak bus and would occasionally see them switching out Colonial Brick or even Kramer. I still kick myself for not doing more with this outfit.

Update: a couple of comments on a posting by Shad Steve Vargo indicate these rails were regularly used in 2005 but are now being torn up.
Ray Carl I was just west of damen last night, looked like the rails have had some use recently. East of Ashland is being torn up.
Matthew James Goss I find this funny that you asked about this, I was just wondering today what had happened to this line. When I started off as an EMT in 2005 I used to see these trains along Cermak. I enjoyed watching them switch from the Steak N' Eggr by the old Fisk power plant.

A Flickr Album of 28 photos (source, they have now [March, 2018] torn up the track along Cermak east of Loomis.)
Posted by Dennis DeBruler at 1:10 AM 1 comment: