(Bridge Hunter; Historic Bridges; HAER; Dave Frieder Photos; 3D Satellite)
This bridge carries 140,000 vehicles per day with eight lanes and 100,000 subway (J, M and Z lines) passengers using two tracks in the middle. It also has a walkway and bikeway. Around the turn of the 21st Century, it was practically rebuilt with a 15-year, $1b plan. [NYCroads]
"Suspension bridge; steel towers; spans 1,600 feet between towers; total length, 7,200 feet; clearance for ships, 135 feet; double decked; 4 main cables 18 inches in diameter; cost $8 million.    The Williamsburg Bridge is the longest span suspension bridge over the East River, it's s span exceeding that of the Brooklyn Bridge by 4.5 feet." [HAER-data]

The Williamsburg Bridge's 1,600-foot main span was the longest in the world from 1903 until 1924 [when the Bear Mountain Bridge was opened]. With 40-foot deep stiffening trusses, it was the first suspension bridge over 1,000 feet to have steel towers....The four main suspension cables are 18.75 inches in diameter and each composed of over 10,000 wires. The Williamsburg Bridge originally carried four trolley lines, two elevated rail lines, four carriage lanes and two pedestrian walkways, making it amongst the most heavily loaded bridges ever built....The Williamsburg Bridge was the last major suspension bridge designed using the "elastic theory," and its exceptionally deep truss is a result of the approximations included in this theory. Substantial increases in suspension bridge spans would not be possible until the application of the "deflection theory" - first used on the nearby Manhattan Bridge. [asce]

Since walking and bicycle riding were an important means of transportation during the horse & buggy days when the bridge was built, there always were walkways on top of the two support trusses. I have to agree with Historic Bridges that replacing the original decorative handrails with cages is a bummer. But to bring attention to them with a gaudy red paint is scandalous.
Obviously, in the 1920s when the auto became the preferred means of transportation, they changed four of the six tracks to vehicular lanes.
I wish the street view driver had chosen the outer lanes. Nonetheless, we get a view of part of the Brooklyn Navy Yard. And we get a good view of truss members that a significantly heavy duty design. The subway tracks are to the left between the main trusses and a walkway is on top.
This view confirms that, unlike other suspension bridges, the stiffening truss is a through truss rather than a deck truss. This would allow a clearance requirement above the river to be achieved with shorter (i.e. cheaper) towers. And reduce the height of the approach bridges.
Here is a view that shows how the suspension cables come down along side the stiffening truss.
This bridge was the second one to cross the East River, and it started construction in 1896. The first bridge to cross the East River was, of course, the Brooklyn Bridge. Between 1852 and 1855, the eastern shore of the bridge was the town of Williamsburg. It, along with other neighborhoods, got absorbed in 1855 by Brooklyn. Brooklyn, in turn, became part of the NYC merger in 1898. The west side of the bridge cleared out the Corlears Hook district. "Corlears Hook once had the greatest concentration of shipbuilding businesses in the nation, and the shoreline was completely obscured with piers, ships, and vessels of all sorts. In the 1830s, it had become a notorious red-light district, with "ladies of the night" setting up shop in the neighborhood's saloons and cellars. (As popular legend would have it, the ladies of the Hook would give the oldest profession a new name: hookers.)" [BoweryBoysHistory]
I did not realize it was a lattice truss until I saw this view of the entire 40' deep truss.
Note that the temporary foot walk to help with spinning the cable is made of wood.

The foot walk made of wood is significant because it completely burned along with a lot of wood structures on top of the towers
Above the deck level, the towers slant inwards because the bottom of the tower straddles the truss whereas the top, which holds the cables, is in the plane of the truss.
Here is where the south lanes pass through the west tower, looking backwards.
I later stumbled across an outside lanes view on the north side.
I was trying to figure out why I was seeing a cable on the outside of the outside lanes where the walkway approaches cross over to the top of the trusses at the end of the truss. Since the outside spans are not suspended from the cables, the cables don't remain in the plane of the truss. This probably helps spread the load on the anchorages.
By the late 20th Century, the bridge was falling apart. Several different plans were submitted. Most of them were to replace it with a cable stay bridge. Some of them had the new bridge being slid into place on giant Teflon plates. But NYCDOT decided that it was better to repair than replace. They developed a 15-year, $1b plan. "The project includes an overhaul of the bridge's four main cables, steel towers, stiffening trusses, and roadways." [NYCroads]
(new window)
Posted by Dennis DeBruler at 9:04 PM No comments:

(Bridge Hunter; Historic Bridges; 3D Satellite)
P&WV = Pittsburgh & West Virginia
"The United States enjoyed the distinction of having the world's longest cantilever truss span for a short time, thanks to this record-breaking bridge, which is an extremely early example of a monumental-sized cantilever truss bridge" [Historic Bridges]
This was built as part of the project by the Wabash Railroad to gain access to the Pittsburgh market. This project also included a tunnel and bridge in Pittsburgh.
I'm glad to see that they have left the decorative finals on top of the towers.
I count 24 panels in the navigation span.
I include a construction photo of the Wabash bridge in Pittsburgh because this bridge would have been built the same way.
This bridge is in the background of this steel plant photo.
Posted by Dennis DeBruler at 12:59 PM 1 comment:

(Bridge Hunter; Historic Bridges; Dave Frieder Photos; Satellite)
"Bear Mountain Bridge was the first vehicular river crossing between New York City and Albany. At the time it was built, it was also the longest suspension bridge in the world and the first suspended bridge to have a concrete deck."  The name was changed to Purple Heart Veterans in 2018. Because the land in the area is granite, the piers and anchors were easy to build. However, the road to the east side was hard to build. 70% of the material had to be drilled and blasted. And care had to be exercised so that none of that material fell on the NYC tracks that were below the road. [hbhv, nysba has the same text so I don't know which is the true source of the material.]
The largest span is 1,632' and it is 2,258' long. It was rehabilitated in 1977. [Bridge Hunter]
That is Bear Mountain in the background.
The east shore has its own "mountain," which is called Anthony's Nose."Each cable was fabricated by John A. Roebling & Sons, Company, is 18 inches (46 cm) in diameter, has a length of 2,600 feet (792 m), and is composed of 7,452 individual wires. The main cables are supported by 355-foot (108 m) high steel towers." [asce, I included the tower height because it was slightly different.]
The photo below shows how tricky it was to build a road on the side of Anthony's Nose. Of the $6m spent on the bridge project, $2m was spent building this access road from Peekskill, NY. [asce]
[The deck is over 150' above the Hudson River.]
Because the state charter to build the bridge required that it be built in three years, the designers omitted covering the towers with masonry to save time. The locals thought the spindly steel towers were ugly. So the designers added an arch in the base of each tower to give it a tunnel-like appearance.
The last suspension bridge I investigated, the Dresden Suspension Bridge, was the first time that I saw a bridge with a separate anchor and abutment. This bridge also has that design.
The Toll House is also rather historic.
Note the bridge in the background.
The foreground looks through the beams of the travelling gantry that lifted the steel for the deck truss from barges on the river.
This was obviously taken from the top of the western tower while they were spinning the cables. In the right middle of the photo, I think we see a crane working on the east road that was carved out of the hillside.
I kept skipping this photo in my news feed until I finally noticed the suspension bridge and Bear Mountain in the background. This is the trestle that is in the foreground.
Two of six photos posted by Curtis Tate with the comment: "The River Line, at Newburgh and Fort Montgomery, New York, September 2005."
A drone video of the bridge, but I did not register to view it.
Posted by Dennis DeBruler at 10:55 PM No comments:

(Bridge Hunter; Historic Bridges; Satellite)
The bridge viewed from the Lower Scioto Greenway on the north bank of the river. 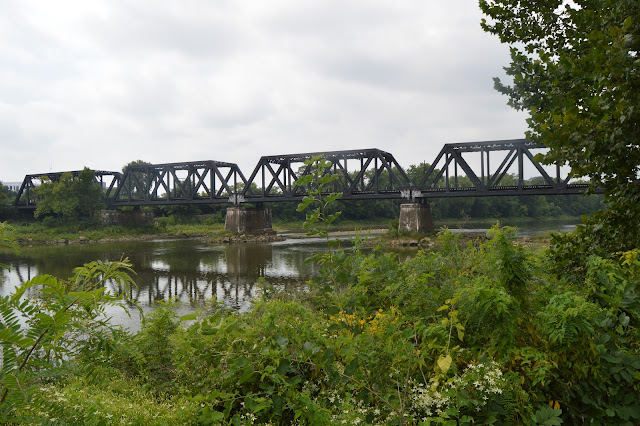 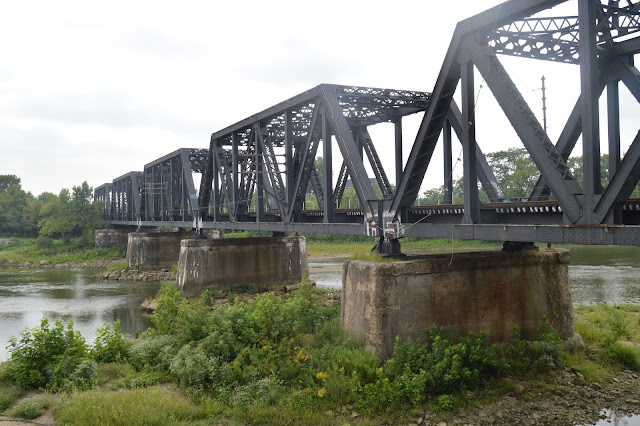 There was a grassy embankment accessible from the trail. This shows the V-lattice compression members quite well. 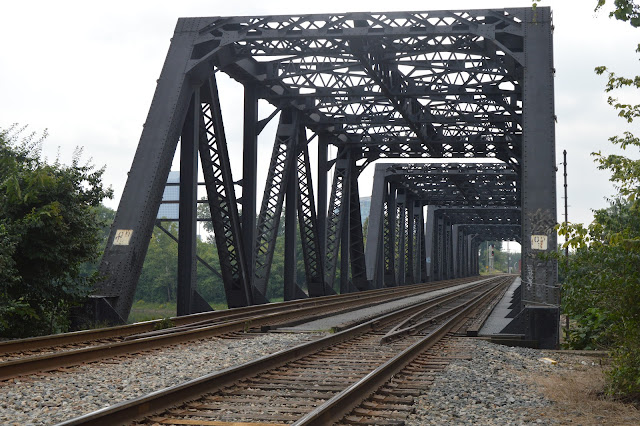 It is newer than pin-connected, but it does have rivets. 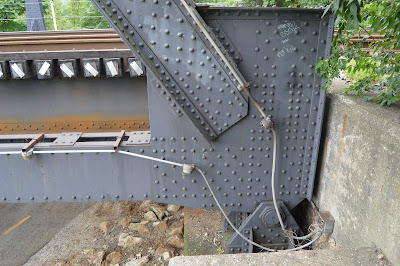 And concrete does require some tender loving care. 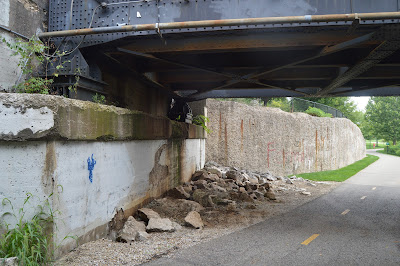 On my way back to my van on Neil Avenue, I encountered a well maintained NS/Pennsy overpass. Since those are rather rare, I took some photos. 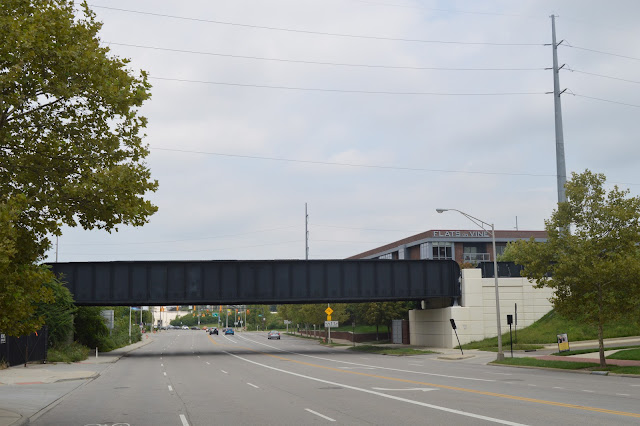 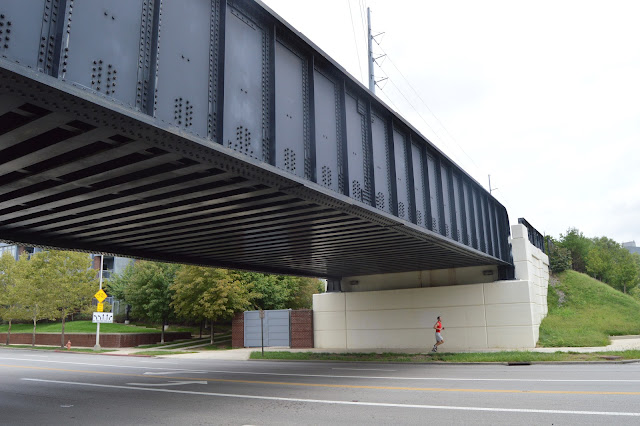 The paint droppings are still rather fresh. 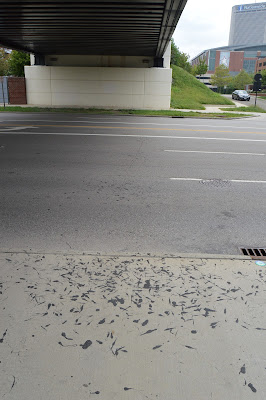 Since this CSX/C&O/Hocking Valley overpass over Goodale Blvd represents a more typical level of maintenance, why did I take photos of it? I took them because you can still see CHESAPEAKE AND OHIO painted on it. And decretive handrails. This bridge has not been painted since C&O bought Hocking Valley. 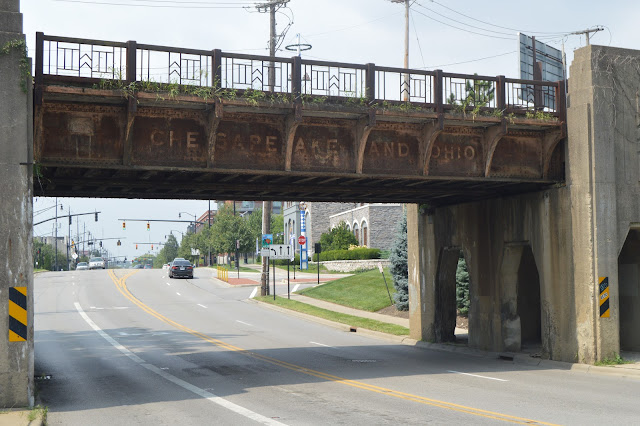 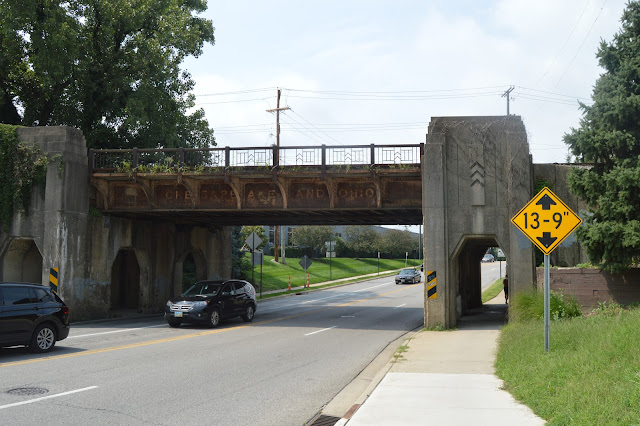 This post is what motivated me to find my Columbus bridge photos. I was on the north bank whereas Ben was on the south bank.
Three of the photos posted by Ben Armand.