MWRD: CS&SC Extension, Creating a 40' Head for the Lockport Powerhouse

(Update: A lot more photos of the newer USACE lock are here. Those notes also have some videos from tows going through the lock.)

More about this photo later.

When the Chicago Sanitary & Ship Canal (CS&SC) opened in 1900, it terminated at a control structure north of 9th Street at Lockport, IL.
There was a 160' bear trap gate in this gap to fine tune the flow of water out of the canal into the Des Plaines River to maintain the proper water level in the canal. That gate has been removed because the powerhouse now provides the day-to-day control of the water level. The sluice gates are still intact in case flood waters need to be released from the canal.
There is about a 40' drop in the land between this control structure and the confluence of the canal with the Des Plaines River just south of the CN/EJ&E Bridge. This drop is why the I&M Canal had its first four locks between just north of Division Street and north of the CN/EJ&E tracks.

To take advantage of this 40' drop, the Metropolitan Water Reclamation District (MWRD), then known as the Chicago Sanitary District, made a canal down the slope by building concrete walls on both sides with earth fill on the sides. This 3D view shows the east dike.
And here is a view of the drop of the land along the west dike.
Now we have the context needed to explain the top photo. That photo was taken from the bus that was driving along the west wall to take us to a tour of the powerhouse. I knew we were driving along a high wall, so I was trying to get photos that showed the height. I also knew, from taking photos in the Rocky Mountains, that it is hard to show height from above. Here are the rest of the photos I took on this part of the trip. 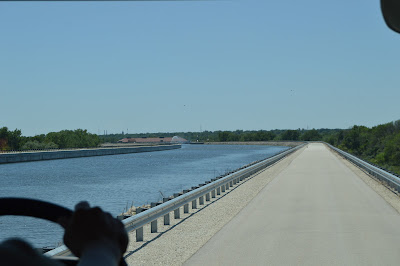 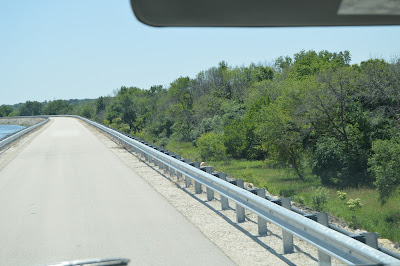 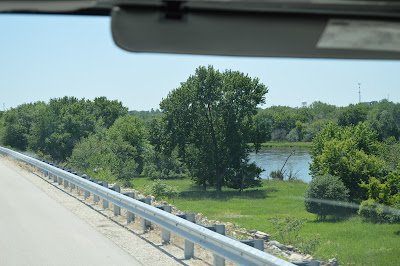 On the trip back to the parking lot, I took a photo looking South when we were on the 9th Street Bridge to capture what I thought was a rather high level of the Des Plaines River. The blue on the left is the higher level of the canal. 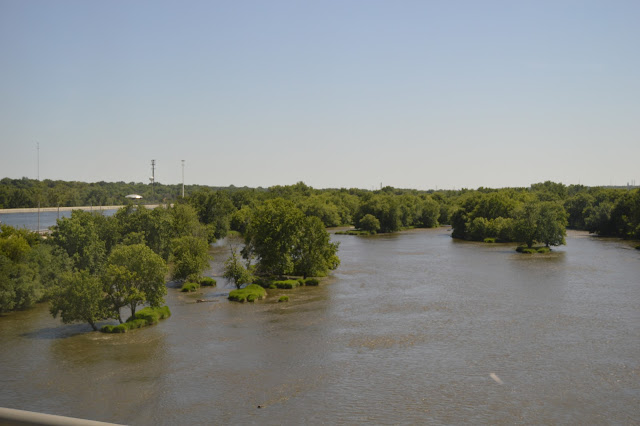 Or maybe the river is always this high.
I also got a view of nature taking over some sunken barges. 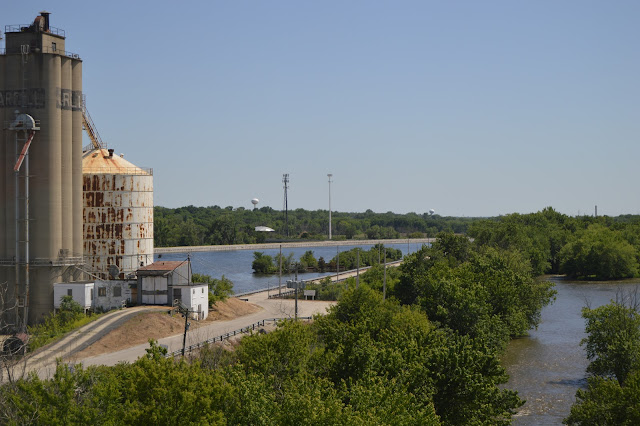 While taking some photos of a towboat, I caught a view that shows the canal level higher than the surrounding land. Of course, it is not as high at the 9th Street Bridge as it is at the powerhouse and lock. 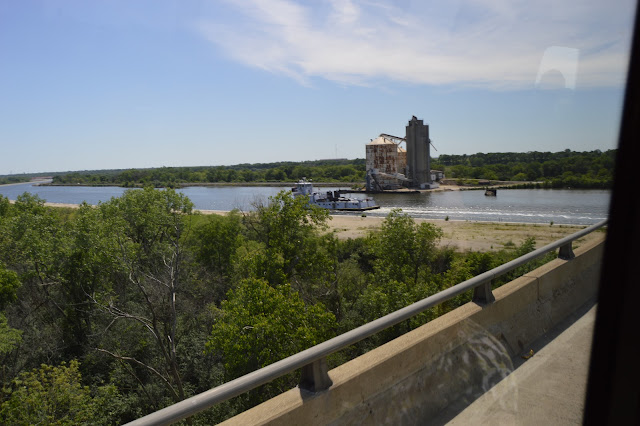 It is worth noting that dikes were used at the original terminus of the CS&SC so that the base of the control structure would be above the Des Plaines River to maximize the flow from the canal to the river during floods. The MWRD must have been really worried about being able to divert flood waters because, when the extended the canal in 1903, they added a butterfly dam near the beginning of the extension. Note two contour lines coming close together near the end of the original canal, especially on the east side.
Those two contour lines continue down to Division Street. I've read that the dikes were 15' tall at 9th Street.
Starting at Division Street, more contour lines are added. That makes sense because the I&M Canal locks are along this stretch.
Although I think the big pile of contour lines on the west side of the canal south of the powerhouse is a mistake.
On the right of the photo below, we see the west wall of the USACE lock. In the background, from right to left, is the tall, narrow gates for the old  22' x 120' x 34' lock, the current control structure and the powerhouse.

Posted by Dennis DeBruler at 9:30 PM No comments:

MWRD: Butterfly Dam in the Chicago Sanitary and Ship Canal

A butterfly dam is a movable dam. Gates the full depth of the canal hang from a swing truss. This one would normally be open as shown because it was intended to help with flood protection. Evidently MWRD wanted to make sure that they could divert excess water through the control structure that is just beyond the dam on the left in this photo, which is looking upstream. Since this dam design is so rare, I have added the "wwDamTech" label on this post. The only other movable dam I remember reading about was an emergency swing dam on the Canadian side of the St. Marys River.

The Butterfly Dam was constructed in the middle of the Chicago Sanitary and Ship Canal for the purpose of providing flood protection for Joliet and other points on the canal west of Lockport. The dam is unique in that it is suspended from a Pratt truss bridge which is supported by two concrete piers. The dam is on a pivoting mechanism, so it can be turned to cross the canal and block the flow of water. It is 30 feet high, and has six electrically operated valves on each leaf. The need to use the dam for flood prevention seems never to have arisen. [HAER-data]

You can clearly see the dam in the middle of the navigation channel in this old photo. I include part of the control structure to provide context for the location.

As the above photo shows, we can't trust the directions in the photo captions. But it doesn't matter because the dam was symmetrical. We can see six electric motors for the six "valves." It is not at all clear to me what the open position of the "valves" looks like.

A couple of colorized postcards.

Posted by Dennis DeBruler at 10:15 PM No comments:

Jeremy Brzycki got a better view past the trees of the trusses over the DuPage River.

The MWRD got an even better view back when it was being used.
It takes more guts than I have to go down the access road along the west side of the CS&SC canal to get to here to take the above photo. I chicken out when I encounter the gates across the access road.

The top photo in eBook has a 1948 view of the three truss spans.

The Bridge Hunter page for this multiple-truss bridge has several photos by three people. They recognized the historic significance of these pin-connected trusses.

The bobtail bridge that used to go over the canal is similar to the 135th Street Bridge that has been preserved in a Forest Preserve.
There is something wrong with the view above because the view below looks more appropriate. Is the canal partially drained above so that they could do work on the bridge? Both views have the 9th Street Bridge in the background, so they are both looking North.
This is the view I would expect to see for the bridge in operation.

This old aerial view shows that there was a jog in Division Street to accommodate the bridges.
Was the 1939 photo taken during a drought? The river is significantly narrower than today's river.

Even the plain bridge over the I&M canal has changed since I first came to the Chicago area. In fact, this one changed since I started writing this blog in May 2014. On one of my trips to check out Lock #1, I noticed that Division Street was closed over the canal. Below is the old bridge. You can see the steel I-beams that were added under the deck as a "patch" to prolong its life.
This street view shows the replacement bridge.


Posted by Dennis DeBruler at 10:00 PM No comments: