(The content concerning the Roosevelt (12th) Street Bridge has been moved here.)
Posted by Dennis DeBruler at 11:26 PM No comments:

Email ThisBlogThis!Share to TwitterShare to FacebookShare to Pinterest
Labels: stub

I remember when they were crash testing casks to make sure they would remain intact and contain the waste in case of an accident. I assume they have now been tested to withstand terrorist bombing as well. But the government decided the safety of a few people far away from waste buried inside a mountain is worth more than the safety of the many people that live near the waste currently stored at nuclear power plants. So I don't think the casks have had much use.

The following flatcar appears to be designed for the type of "intermodal" cask that John's photo at the top shows.


Update:
Davis Shroomberg Flickr 2015 Photo: "The bridge was built in 1892 and sees heavy traffic as part of BNSF's Aurora Sub." 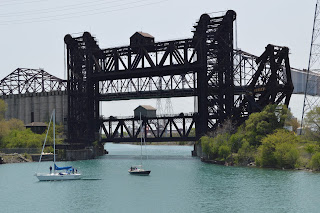 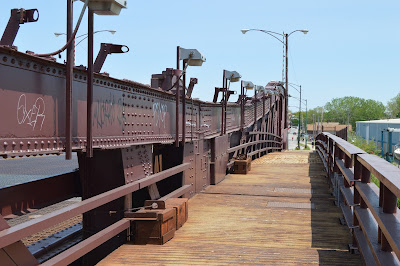 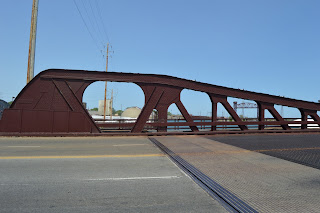 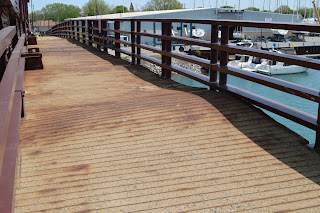 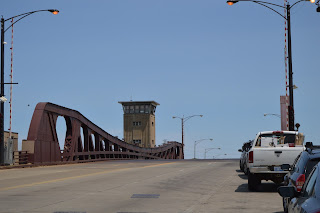 Alan Janney caught the Alpena heading towards the lake causing this bridge to be in the raised position. Note the NS span is already back down.

When I commented that lakers with their bridge on the bow are becoming rare, he posted a couple more photos:

C. B. Douglas posted four pictures of a laker north of 95th street with the comment:

Posted by Dennis DeBruler at 3:57 AM No comments:

According to a comment below by Bob Lalich, the current tower started operation in 1953. The above tower at the north end of the junction would have helped the main tower down where the two branch lines crossed the mainline.
Jason Bird posted the following three photos with the comment "Rock Island Gresham tower. Retired."


The third picture had some comments. To summarize: Left: Chicago, right: Joliet, bottom: Metra's subline (Beverly district), top: South Chicago Branch. The lines up the center was the connection between the two branches. At one time the B&O used the two branches and that connection to go west to Beverly Hills where they had a track that went north to meet their B&OCT tracks up the Western Corridor.
Looking at the left side of the third picture, the turnout on the bottom was the "Wall Track" connector to the BRC.

This 1916 map shows all of the tracks mentioned on the control board at the junction. I added a yellow rectangle to highlight the junction. Today, the connector between the two branches and the yard is gone.

Not only did the connector between the branches exist in 1938, you can see streetcar tracks in Halsted. I added a red rectangle where the pre-1953 tower stood.


One of fellows that I know on this group asked if I had any pix of Gresham Tower (89th/Vincenne in Chicago). I have a whole bunch of them on slides, but here are some images I had scanned a while back (I am a contributor to a fellows blog called "North American Interlockings"). The interior photo is (if I recall correctly) from a Rock Island employee magazine. The pix I took myself were an occasion when my (then) ten-year old son and I took CTA's #24 -- Wentworth bus out to the tower to take pix. (The bus no longer operates that far south on Vincennes.)