Update: This posting is about my visit to this tower, I have already written the main posting for this tower.

During my last visit to Ping Tom Memorial Park, I stayed on Wentworth north of 18th Street even though it was marked No Outlet because I was curious what I could see. I was pleasantly surprised to learn that I could go all the way north to the tracks because it is now overflow parking for the new fieldhouse and ballpark. Both of these are built on Santa Fe's former passenger engine service facilities. The back wall of the roundhouse would be along the new sidewalk in this streetview.

I walked over to a landscaped hill north the of the fieldhouse and took these three pictures to provide context.

I used this aerial photo to confirm the land I parked on is fill of the old Santa Fe passenger facilities and Wentworth Ave. to create a parking lot for Ping Tom Pool and the baseball diamond where the Santa Fe turntable used to be. 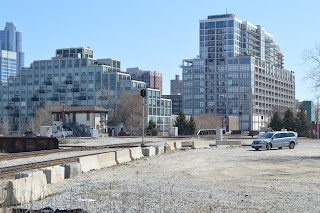 A closer look at the eastern view shows the edge of the connector bridge on the fill of the Santa Fe tracks on the left, the bridges over Clark Street in the middle, and the Metra interlocking tower. The Meadow Gold Butter cold storage building that has been converted to condos dominates the right side of the picture.

While walking back from the grassy area, I discovered that there is still a tie-plate stuck in the parking area.

During my visit to this area, there were several Red Line trains using the State Street Subway. To the right is a southbound train leaving the subway. Below you can see a meet in the distance and the tracks descending into the subway.

I went back to the grassy area north of the field house to get another picture of the St. Charles Air Line (closed position) and B&OCT (open position) bridges because this is a view I have never seen before. The tracks in the foreground are for the IC. The walkway on the other side of the tracks is part of the Ping Tom Memorial Park. This confirms they have filled the C&WI track area as well as the Santa Fe tracks along the IC embankment. 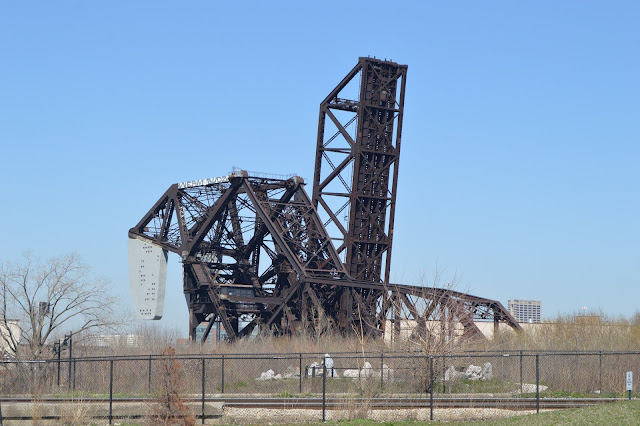 While I was taking this picture, I heard the sound of a diesel. I turned toward the east and grabbed this picture. Then I ran north towards the barriers so that I could shoot around the tree. The train seemed to be moving fast. (But I can't swear to it because I was busy running rather than watching the train.)  I wonder if the diamonds are OWLS because I did not hear any "banging of the diamonds." Trains on the SCAL, including the Amtrak trains, would have to go slow anyhow because they cross the movable bridge over the river and do a sharp turn south on the east end.

I was able to get a shot of the engine by the tower that was not skunked by the trees, barely. I rotated, cropped, and darkened this picture to update the initial posting. After I moved further around the tree, I took another shot because it was a long commuter even though it was a Saturday.
I ended with a west-to-east sequence of pictures taken from as far as I could go north and still not be trespassing on railroad property.

I repeat the "looking North" photo because David's photo below made me realize that we are seeing the top of the embankment wall just beyond the fence. 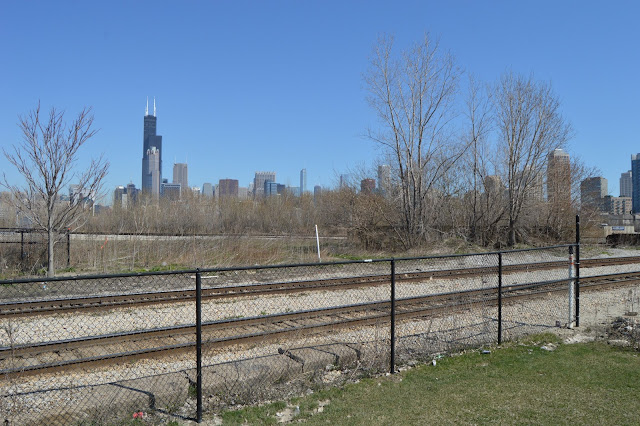 Posted by Dennis DeBruler at 8:19 PM No comments:

Posted by Dennis DeBruler at 5:34 AM No comments:


The 6200 was built by Baldwin in 1944, and operated between Chicago and Crestline, Ohio. Tractive effort at all speeds exceeded that of conventional steam locomotives of comparable size, weight and boiler capacity. It also exceeded the performance of a 6000 horsepower diesel above 40 miles an hour. Below 30 miles an hour, steam consumption was high; above that speed, it was far less than normal steam engines.

Frank Hicks Bob Bruneau said he recalled a number of times watching this thing pass by at Englewood. Some of the railfans nicknamed it the "volcano" because of the voluminous amount of crap that it would spew out the stack, ash and embers and stuff.
Stuart Pearson From what little I know, or have read this Locomotive when operated at Speed was a WONDER, but SLOW Speeds, and Reverse weren't economical.
Stuart Pearson Mainline High Speed operation was at 310PSI Boiler Pressure, however Slow Speed Operation would, on occasion drop Boiler Pressure as low as 85PSI, and in tuen created LOTS of HEAT in the FIREBOX that caused STAYBOLTS to POP/BREAK. It last a mere 2 years.

Posted by Dennis DeBruler at 5:20 AM No comments:

Email ThisBlogThis!Share to TwitterShare to FacebookShare to Pinterest
Labels: rrPenn

Note the milk can being used as a hitch stand. This is the type of milk can my grandfather used on his dairy farm before they switched to the pipeline and bulk tank. Kolton posted to a closed group, but I you can access the album of 30 pictures of other antique farm equipment  if you are a Facebook member.

Update: a video of a dairy back when milk was delivered with cans rather than bulk milk trucks. First they unload them. Do they weigh and sample each can or a batch of all the cans that came from one farm? The later would require some sort of marking and more careful placement in the box car of the "milk run" trains. Then you can see them putting the cans in and out of the washer. I wish someone would narrate it. I can guess what some of the equipment is. For example, I think the big round tank with a lid is a pasteurizer. I was surprised to see that a dairy would have a lathe.


At 1:03 in this video, you can see someone pulling a cart with at least three milk cans getting ready to put them on the arriving train.


Posted by Dennis DeBruler at 5:17 AM No comments:


This station was located next to a very impressive interlocking plant at the junction of the GT, IHB Stockyards line, and leads from C&WI's coach yard and engine terminal. Here is a 1953 photo from the tower, which was located on the south side of 47th St. The trackwork includes a crossing through a switch!

Stan Stanovich ...Bob Lalich, I've seen this general area more days of my working life over the last 20+ years than not! The tower stood until 1999. I'm having a little bit of a problem orienting myself with this photograph! We're looking as the bird flies south here, the Stockyards line (49th line) is off to the right! To the left is the C&WI main toward 74th St and the Pennsy, completely out of sight to the left?!!!
Bob Lalich I'd say it's a bit SSW but you got it Stan Stanovich.
Phil Schmidt About when did the GTW and IHB stop using the 49st line from Elsdon? And is it still useable? I seem to remember something about it being restored by the CREATE project.
Stan Stanovich ...when I moved to Chicago in 1995 and started to work in the area as an engineer for what was then Conrail, the GTW/IHB connection just southwest of 47th St tower was basically all still in place. It appeared as if it hadn't been used in MANY years. It was all taken out in 1999 when the C&WI/Metra southwest route was relocated west of C&WI's former 51st St yard. Prior to this, the C&WI mains sat in between former PRR 55th St yard and 51st St yard. With the line relocation they became intermodal strip tracks 40 and 41 sort of effectively combining 55th St and 51st St into one yard, instead of dividing the two! It is collectively known today as the NS 47th St intermodal yard. I understand that earlier in time they were originally located where they were moved to in '99!!!

IHB stopped using the east/west route when the stockyards closed and GTW stopped using it when it quit running passenger trains to Dearborn Station via the Chicago & Western Illinois. Norfolk Southern must have bought the Metra/UP land along the Metra former C&WI mainline to expand its 47th Street Intermodal Yard.

In the upper-right corner, I noticed the long, narrow shadow on 47th Street. That is probably cast by the tower. You can also see the really long shadow over the tracks of the smokestack in the photo.

NS/NW/Wabash Bridge over Wabash River in Attica, IN

Jeffrey Bossaer posted more information about the wreck in the comments.
5 photos
12 images about two wrecks on Apr 5, 1914    The iron bridge was not replaced until 1922.

Posted by Dennis DeBruler at 11:39 PM No comments: