On Facebook, someone asked for a closeup picture of the Maintenace-of-Way flatcar that carries its own ramp for loading and unloading  equipment. I learned that the ramp has an incline of 7% and that it can load both steel and rubber wheeled equipment. A hydraulic wench is provided to load disabled equipment. (ProgressiveRail1)

Rob Moore provided this photo from CSX at Westfield, MA. I tried to imagine how that ramp is unfolded. Since a Facebook comment called it a "scorpion car", it was easy to Google it and find some videos --- retracting and deploying. When the ramp is in an intermediate position, it is obvious why the car is called a scorpion. The sequencing is automated. The remote control has two buttons --- deploy and retract. The longer deploying video confirms that it is unfolded starting with the segment attached to the car. Then the second and fourth joints are done in parallel. And then the remaining joints are done one at a time. One source indicated it took 15 minutes and another source indicated it takes 5 minutes. Since 3 people were watching in the deploying video, maybe it worked 3 times faster. Or maybe the 5 minute value is the correct one. I assume trains have more than one flatcar with bridges between them so that this ramp allows them to load multiple cars using the "circus ramp" style.

In fact, this video confirms that they load multiple flatcars from the ramp at the end. It shows the entire sequence of deployment, loading, and retracting in case you have a lot of coffee to drink.

Update: a video of unfolding when only the first stage worked. A later video when they got the later stages working.
(new window)

(new window)   A comment explains that the arms for the tie-puller/installer are extended when loading to make sure the heads don't hit the cars.


A 11:52 webcams video of loading equipment The good shots of them loading start at 3:33. At 4:53, a couple of the yellow critters had trouble making it up the ramp. At 8:50, they fold the ramp up.
Posted by Dennis DeBruler at 6:59 PM No comments:

The Chicago & Alton Railway Bridge was constructed for the joint use of three railroads: the Chicago & Alton, the Illinois Central, and the Atchison, Topeka & Santa Fe railways. Engineer, John W. Page of the firm, Page & Shnable, developed and patented the design of the bridge, which is known as a Page trunnion bascule. The Chicago & Alton Railway Bridge is significant for being the first of its kind erected for railroad use and it may be the only one left in existence. The superstructure is made from steel and operated by using two 124-horsepower motors mounted on a frame between two counterweights. These counterweights pivot and roll downward, tilting the bridge and giving it the appearance of the span rising effortlessly. The bridge's counterweights are contained within steel plates that visually blend with the structure giving it a graceful appearance. The bridge is visible from the Stevenson Expressway and Metra and Orange Line trains. Today, it is still in use, but its mechanism has been disabled, since it no longer is raised for navigational purposes. [ChiLandmarks]

Only four bridges were built using the Page Bascule design. Since the abandoned Monon span over the Grand Calumet River was destroyed by an illegal scrapper, this bridge is the only Page design in the world that is still carrying traffic.

Update:  I captured a relatively complete north elevation shot because a previous building has probably been torn down and the replacement has not yet been built. Note the rather ambitious graffiti on the truss members. It took a lot of energy (and some ropes?) to paint the vertical members.


Sorry, the content of this posting got replaced by the contents of a posting that I was working on so much of my original content describing the Page design is gone. But that information is still available in the documents provided by Historic Bridges.

And when Chicago required the railroads to elevate their tracks, they had to elevate this bridge. They are using screw jacks and lots of people like they did when they elevated the buildings in downtown Chicago starting in 1855 to install sewers on top of a swamp.
Concerning four heads per track, Jon Roma comments on his 1995 Flickr photo:


The only place where I've ever seen four-headed signals. Each head was assigned to a specific route - three mainline routes along with a restricting indication on the bottom head. The Santa Fe and the Illinois Central Gulf employees timetables called these "non-standard" signals and gave specific instructions about them.

Jon's Bridgeport album has several other interesting views, including the inside of the tower that controlled this junction. This signal is a reminder that the two bridge tracks fanned out to six mainline tracks, two each for CN/IC/ICG/GM&O/Chicago & Alton, CN/IC/CC&P/ICG/IC/Chicago, Madison and Northern Railroad, and Abandoned/Santa Fe.

Below, Michael is east of the bridge facing east for this photo. Note the two red lights above the caboose. That is a B&O CPL (Colored Position Light) signal target. A reminder that the B&O owned the Alton for a while in the 20th Century.
I include this one because it shows an even bigger traffic jam caused by the bridge. It also shows how well focused the signal lights are. If you get off center, you can't see the lights anymore.

Update: While my daughter was driving me around Chicago so that I could take pictures, I shot a sequence from I-55. Fortunately, the camera was able to lock focus even though we were moving at highway speeds. Normally, these pictures are not good enough to include in the blog. But they catch that mixed freight trains are still running on the CN in 2015. I was surprised to see a freight train because I have read that after CN bought EJ&E, they were moving their freight operations to the periphery of the Chicago area and Kirk Yard.

The covered hoppers are VeraSun Engergy, so they are probably taking corn to an ethanol plant. 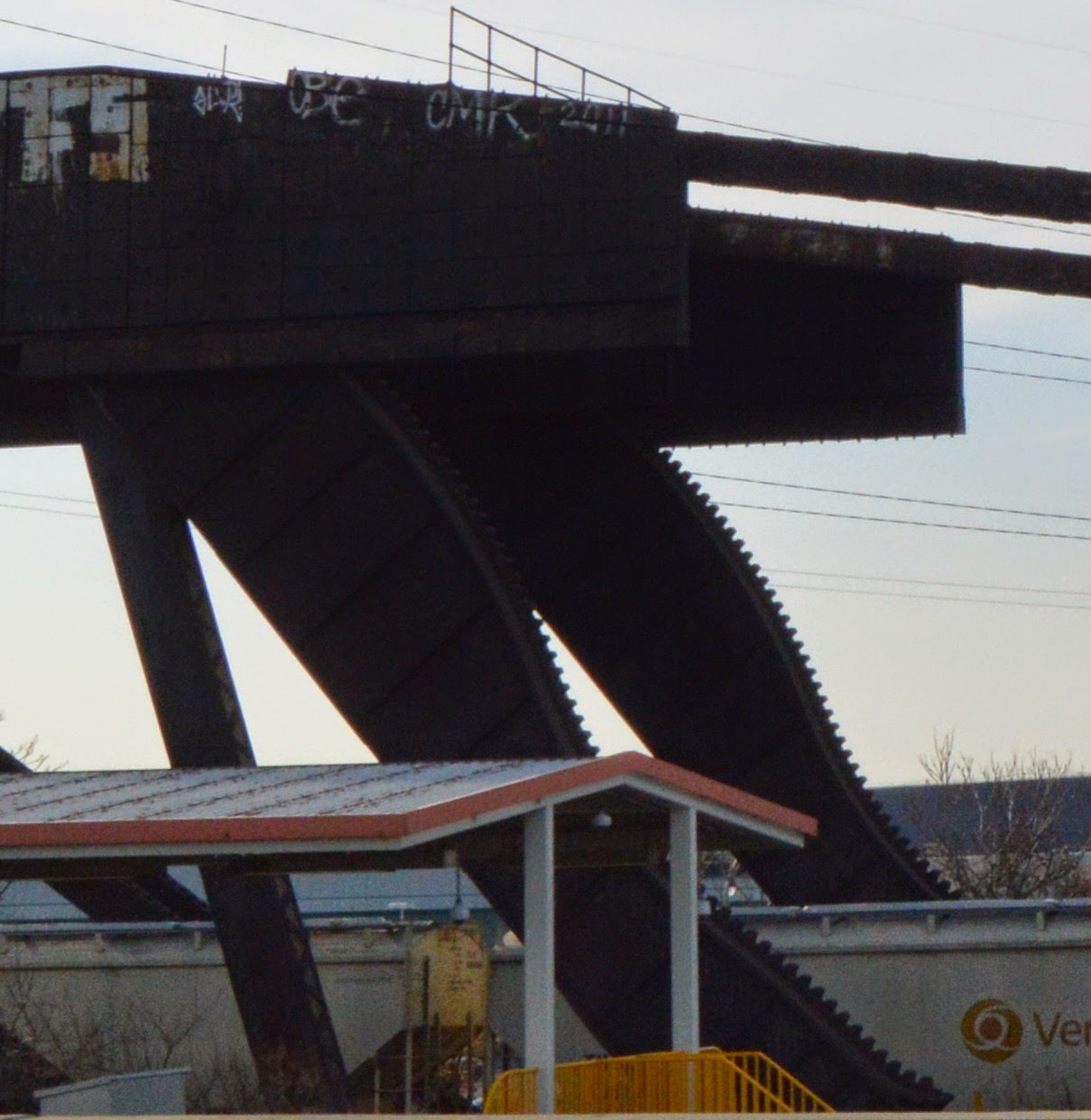 John DeWit Woodlock II posted two photos that were taken just west of the bridge with the comment: "EMDX 827,BN 6237 @ Bridgeport Tower-Chicago,IL 28 JAN 97."
Darren K Hill Very nice John!I used to shove across that bridge into IMX.
John DeWit Woodlock II Thank you. IC or SP?
Darren K Hill UP,2004,until it closed at the end of that year.
Dennis DeBruler Darren K Hill So that is when IMX closed. When I started seeing Fed Ex trailers on intermodal trains using the former CB&Q route, I looked for a Fed Ex facility. I found Fed Ex has been recently built on part of the IMX land. http://industrialscenery.blogspot.com/2018/06/fed-ex-shipping-center.html I still don't understand why CN pulled the plug on this yard.


William's 1977 photo above still has the bridge tower.

William Shapotkin posted four photos of a westbound Plug travelling across and past the bridge.


Most of the time when we think of "commuter trains" we think about electric MU cars or bi-level, push-pull trains. That is today's world, but I would like to put in a plug for something a little different here. On July 1, 1977, the S/B ICG Joliet Plug is seen x/o "Bubbly Creek" at Bridgeport Interlocking (near Archer and Ashland Ave in Chicago) and heading S/B onto the ICG (former GM&O). Four tracks to the left are (left-to-right) ICG (former IC) and ATSF). Wm Shapotkin collection.

This was long before the Orange Line was built on the abandoned Santa Fe RoW. Note that each signal above each track had four targets. I read there were special instructions in the Rule Book for the interpretation of those signals because the tracks for the IC, Santa Fe and GM&O funneled down to two tracks across the bridge. https://www.google.com/.../@41.8397291,-87.../data=!3m1!1e3

Bing Owens posted eight images with the comment: "Chicago and Alton Railroad Bridge in Chicago...On Ashland...crossing the Chicago River...This bridge does not go up anymore, I do not believe, but it is a very important historical bridge here in town..."
David Daruszka

+2
I ran trains over this bridge many times during my railroad career. Here's more info: https://forgottenchicago.com/.../bridgeports-chicago.../


Posted by Dennis DeBruler at 5:07 AM No comments: