Kraft Plant in Kendallville, IN

Update: I learned from a Fort Wayne Area Railfan that this plant also makes Marshmallows. Another major factory in town, a foundry, closed in 2009.

When I was a kid living in Fort Wayne, IN, we would visit our dentist in Kendallville, IN. Back then, IN-3 was a two-lane road that went up Main Street. As we entered the town, there was a Kraft plant on the left. I learned that it made the individually wrapped caramel candies that Kraft sold in bags. If I remember correctly, this plant was an important market for the Amish dairy farmers because it could use milk that had not been kept cold enough for direct human consumption.

When I needed to go to Bowling Green, OH, I took US-6 across Indiana and turned right on Main Street in Kendallville to check it out. It still exists. The above view is of the east side taken from Ohio St.

This view is the rest of the east side from the same location.

The Kraft signs have not been updated to reflect the Kraft-Heinz merger. (That corporate web site is one of the least informative I have looked at. The only thing I could find about their history was "our family of trusted products were developed over a century ago." Also, I could not find their locations other than the co-headquarters of Pittsburgh and Chicago.) 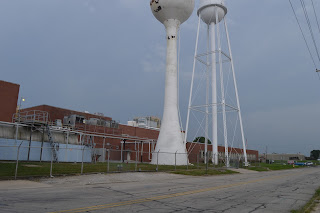 I went further down Ohio St. because there was some more interesting stuff beyond the first "layer" of buildings. I drove to the far end of the office building and found Visitor Parking and a Visitors door. Since I wanted to ask if they still made caramels, I parked and went through the door. But there was an inner door that was locked and a sign indicating that I should ring the bell for the security guard. While I debated about ringing the bell, my wife pointed out that a guard was on the way. So we met him at the fence. When I asked if they still make caramels, he said "oh yes." In fact, they are making them as fast as they can.

As with many big plants, sometimes it is better to look at a satellite image than a street view. Note that there is a tank car and a covered hopper on the storage stub. I assume that is for corn sugar and granular sugar, respectively. The plant is served by the Kendallville Terminal Railway. Below is one of the Google Street Views because it shows that sometimes a lot of sugar is delivered,

Judging from the number of trailers and shipping docks on the south side of the plant, all of the finished product is shipped by truck.

Posted by Dennis DeBruler at 7:55 PM