It is amazing how I come across topics in pairs. During the same week that I stopped in Kendallville, IN, to get pictures of the Kraft Caramels Plant and the railroad that serves it, Kendallville Terminal RR, Matthew Ditton posted some pictures of it in operation in Facebook: Sept. 6 and Sept. 7 and a Flickr Album. The 1.1 mile railroad is a remnant of the Grand Rapids & Indiana Railroad that ran north/south through Kendallville. Because GR&I was owned by Pennsy, the GR&I was in turned owned by Penn Central and Conrail. Conrail dumped most of the GR&I route, but it kept this segment to serve the industries in Kendallville. So when Norfolk Southern got the NYC mainline across Indiana when Conrail was split up, it also got this remnant. Because Class I railroads don't like dealing with one or two freight cars each day, it sold this remnant to Pioneer Railcorp's Michigan Southern Railroad in 1996 and it became the MS Kendallville Division.

That explains the lettering that can still be read on the engineer's side of their locomotive: "G.R.I. Kendallville Div. of Michigan Southern R.R." Pioneer Railcorp then reorganized it as its own railway --- KTR. Fort Wayne Area Railfan has a photo from before the paint started disappearing. You can tell the paint that the locomotive manufactures use is better than what is used by the railroads for patching the names. The black paint used over the whole name has begun to fade enough that I was trying to figure out who the previous owner was. You can make out "THERN" at the end of the name.

The right side has faded even worse.  I could make out that  the previous name began with "LU?IN?TON." Then I came across a reference that indicated it was Ludington Northern. That reference provides a link that indicates the engine is a SW8. One of the comments on Matt's Sept 6 photos indicates that LN was the original owner of the SW8. Since I don't see a SW8 very often, I include a couple more angles of it. 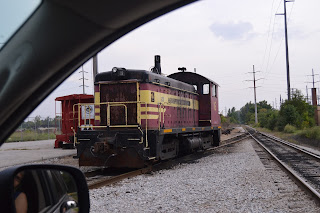 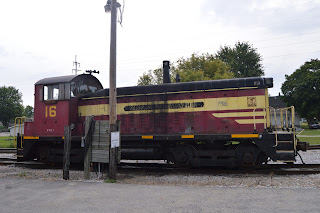 A Fort Wayne Area Railfan has more photos of PREX 16 in action. He also has more history about the Ludington Northern.

The day I arrived, the PREX 16 was parked next to their caboose-office, which is just north of Ohio Street. 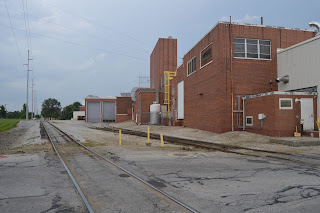 South of Ohio St. is their primary customer, Kraft. (See that link for some more pictures of the plant and some cars parked on the stub lead. The above links to Matt's Facebook postings has a picture of the doors being open with the engine on the left and a tank car on the right.)

(Update: What I'm calling the stub lead on the left ends at the tree line. It used to be the mainline of the GR&I. Matthew Ditton posted in Facebook that Conrail abandoned the track south of here in 1982 and removed it in 1984.)

As you can see, there were no cars down on the storage stub by the plant. But they have a small yard up by Rush Street and there were four covered hoppers and five tank cars parked there. I also saw a comment that they park boxcars with salt on a team track to be offloaded to trucks. 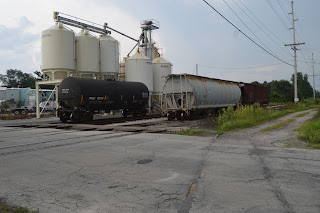 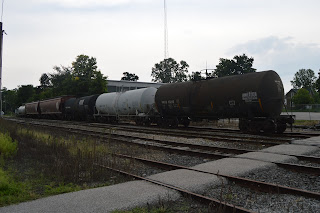 The photo on the left is north of Rush and the photo on the right is south of Rush . Matt explained that Norfolk Southern delivers a cut of cars about once a week and that KTR switches the Kraft plant each weekday, typically in the morning.

Note in the above picture on the right that there is a track coming towards me. It stops at the my feet. There is a vacant lot north of Rush. I suspect that track used to be the lead to an engine service facility. I found http://igs.indiana.edu/IHAPI/Map/ for aerial maps of Indiana. And I determined that I want to look at photo BFO-4-16. But, unlike the Illinois maps, I'm evidently supposed to pay for a copy of the photo. So I took a look at a satellite image instead. First of all, note that the caboose-office is still on its trucks and is parked at the end of the weedy track. Secondly, note that you can see about half of a circle that is about the right size for a turntable.

It is worth noting how well maintained the track is. On the corner of the parking lot that held their caboose-office, they had a pile of fresh ties. When I zoomed in on the stub track by the Kraft plant, it not only had plenty of clean ballast, I could not find a single loose spike. When I start posting pictures of CSX track, you will learn that loose spikes can be disturbingly common.


There was a siding between Rush and Williams streets as seen in the aerial shot. When I first moved to Kendallville in 1987 you could still see most of it. It's still there but has just sank into the ground. There was also a very old small wooden building by this siding that looked like it was at one time used by the railroad that has since been torn down. I've worked at Kraft for nine years and in that time, the engine has broke down a couple times. While switching is typically done in the morning it is an as needed operation so occasionally they will switch in the afternoon and rarely NS will drop cars off at night. I see them do this a couple times of year. The rail was also upgraded a few years ago to handle heavier cars. In the 80's I would watch Conrail run cars over broken rail and also spots where the joints were very loose or in one case missing. It definitely looked dangerous back then.


Former Lundington and Northern. It use haul silica sand to the C&O in Lundington, Mi. As i understand, It use to make occasional trips on the Carferries to Milwaukee for servicing.


An employee for the Kendallville Terminal Railroad gets ready to throw the switch so PREX 16 can shove cars down to the KraftHeinz plant.

I hope the condition of the track is exaggerated because the picture was taken with a telephoto. Ivan Archivaldo commented " Look at those dips, squirrels, and misalignments. Lol."

Matthew answered a question concerning the signalling: "The signal is for the Norfolk Southern Chicago line. The track the engine is on used to go all the way to Grand Rapids Michigan but was removed north of the NS line in 1979."

Jeremy Winkworth posted a picture of the locomotive from 20 years ago asking for some current photos. I and others contributed photos as comments.
Jeremy Winkworth I should add a couple of bits of information. Kraft in Kendalville gets a daily switch. Secondly, in the cab of that switcher it looks much like how it came from the factory many decades ago. It has not been updated, making it a true piece of history!

Posted by Dennis DeBruler at 10:59 PM