Update:  PD&E = Peoria, Decatur & Evansville
The first picture of thepde.info page of pictures is well worth a look. Note from the trees in the background how high the river is.

"Former" in the title has a dual meaning. First of all, this line was abandoned by the IC a long time ago. And as of December 27, 2011, the line has been completely abandoned. Secondly, the IC Grayville RR Bridge is no longer intact. I had noticed during the Fall of 2013 while crossing the I-64 bridge over the Wabash River that the second span from the west  (Illinois) side had the west end in the water and the east end still on its pier. It turns out the span fell when a pier failed during the 2005 flood. But the first time I was in the area after buying my "industrial history" camera, the broken span had finally been cleaned up. So it set broken for almost a decade, but between May and July of 2014 it was removed.

But when I studied the Bridge Hunter photos, none of them show a span that is half in the water and half on a pier, including a picture during the 2005 flood.

Note that there seems to be the top of a washed out span visible under the railing of the I-64 bridge. The following photo confirms that the two fixed spans and the swing span you see above in 2005 still are intact, so now I'm really confused as to what span structure I was seeing in the river last Fall. I remember the end that was resting on a pier would have been on the leftmost pier in this photo.

A Bridge Hunter photo shows that land is now under the swing span. This is because the flow in the river changed when an oxbow was cutoff by a 1985 flood. That increased flow on the west side probably helped destroy the bridge in 2005.

The original 2005 damage appears to be the loss of a pier and 2 fixed spans. The Bridge Hunter pictures show that another pier has failed.

A 1910 postmarked postcard from the Bridge Hunter collection shows an older swing span and a ferry. Tony Dillon commented:


This is the original 1886 bridge that was built by the Keystone Bridge Company of Pittsburgh, PA. They also built the White River Bridge in Indianapolis that same year, and it still survives today. This bridge would be rebuilt in 1910 and the center swing span replaced again in 1965. The trusses of this bridge are extremely unusual and may possibly be of the Thatcher patent, which I have never heard of being used on a RR bridge before. 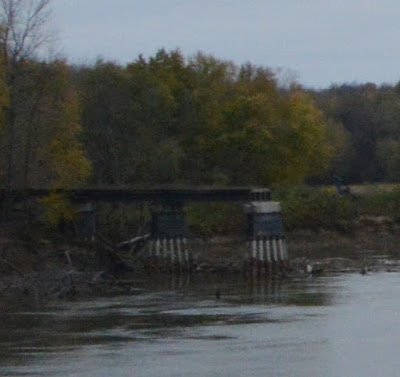 Most of the trestle is tree covered, but some of it does show in a bridge picture.

Former ICRR bridge at Grayville IL.
This bridge was going to be part of a rail trail until the middle spans were washed out by a flood in 2005

Indiana Hyrail operated on a shoestring. That thread broke when a pier washed out on their most profitable line, taking down two spans of the former ICG bridge over the Wabash River near Grayville, Illinois. The tracks were pulled up soon after. The article I referenced said this happened in 1990, but I remember walking over this entire bridge, something I could not have done before 1996.
Max and I revisited the site today. The approach trestle is thoroughly overgrown with vines and small trees growing out of the ballast.

This bridge has had a rather tortured history.
Follow these two Flickr links for more information:   the above photo,   another photo.
[The derrick has been built to recover the the equipment. The description of the second photo says the Wabash used to have dams to aid riverboat navigation.]

Posted by Dennis DeBruler at 2:42 PM