UP and CP Rail Power on a Mixed Freight

While crossing Forest on the way to the library, I noticed a headlight to the west. Specifically, a freight train was setting in the hole. Since it was still setting there on the way back, we walked down Warren Avenue to the railroad yard to check it out. Each of the three engines was rather rare for the racetrack, so I borrowed my wife's phone to take some pictures in case the train left before I got back. And then I went home and got my camera and some wheels. The train was still there. The sun was on the other side, but I didn't have a choice of going to the other side to take pictures -- the track is lined with private residents on the south side.

Checking the Diesel Shop, they are: 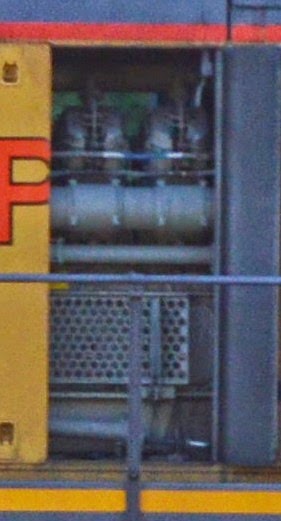 Since they normally don't run with a door open, I digitally zoomed in on the engine's guts. The picture to the right is at full camera resolution.


There were covered hopper cars for as far as I could see so I at first assumed it was a unit train. But I could not make sense of who it would run-through with using CP Rail and UP power. Then it occurred to me that I needed to drive down Warren to see if it was a mixed freight train. It was. And as is typical for the racetrack, it was dominated by covered-hopper and tank cars.

I have two theories as to why this train had UP and CP engines. First of all, note that they are old engines. The other railroads are evidently dumping their junk on BNSF to satisfy run-through requirements. So theory one is that the mixed freight was the next freight out of the yard so they used it to get the junk off the system as fast as possible. Theory two is that they did not trust the junk on important unit trains, so they used them on a "move the low priority miscellaneous cars on the weekend" mixed freight. I'm going with the second theory because the Santa Fe is also an old engine.

The first access point was at the head of the old team tracks. The view looking East was decent. But the view looking West had some serious sun issues. I included the uncropped photo to document how badly back lit the angle was. 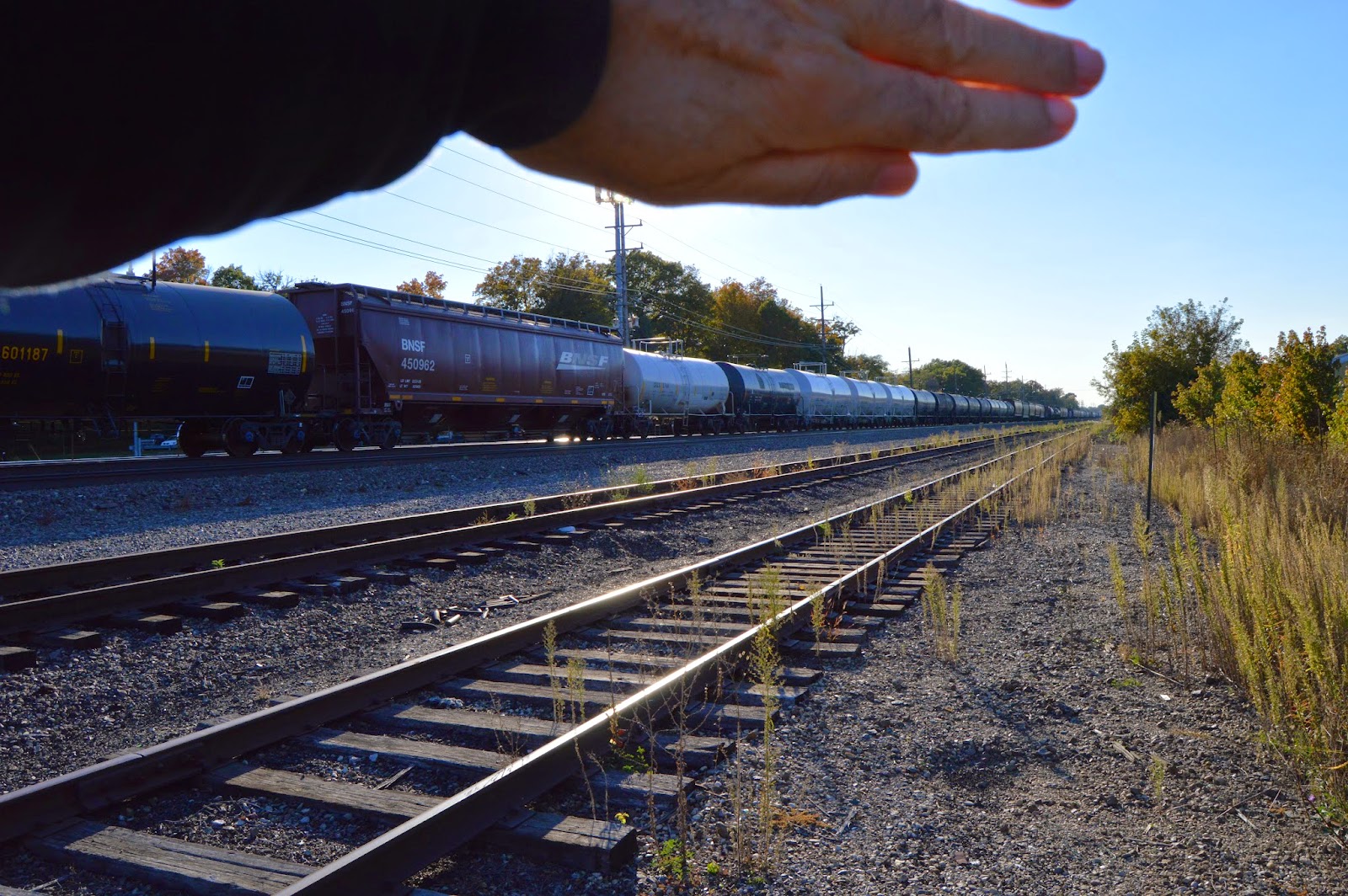 The TTX gondola car carrying shredded metal is the only type of car other than covered-hoppers and tanks that I could see from this vantage point. The sun was really bothersome, and then I remembered that I have been thinking for the last couple of months of checking out the view of the tracks from Gilbert Park. So I went back to Forest to cross the tracks and then went West on Gilbert Avenue. There was a game in progress, but there was a couple of spots still left in the parking lot. Note the black tank car, Heritage 2 BNSF covered hopper, white tank car sequence above. You can spot that sequence in the following views from the South looking East and then West.

Walking West across Gilbert Park gives the following close up of the west end of the above picture.

I'm not sold on the sunny side. I find the glare to be a bigger problem than using my hand to block out the sun on the dark side. I took some shots from the other side of the baseball diamond. Note the base runner. If a game is not in progress, taking some shots from about first base might be a good vantage point of trains. The automobile traffic wasn't too bad.

Since I saw a gondola car in the westward view above, I pulled into a side street to get a closeup of two coil cars and a bulkhead flatcar.

The next access point was the east side of the Belmont Station. I'm back on the north side of the tracks. This section has a couple of empty lumber cars.

And then east and west views from the west side of the platform. I had forgotten that the tracks curve to the south when looking towards the west. 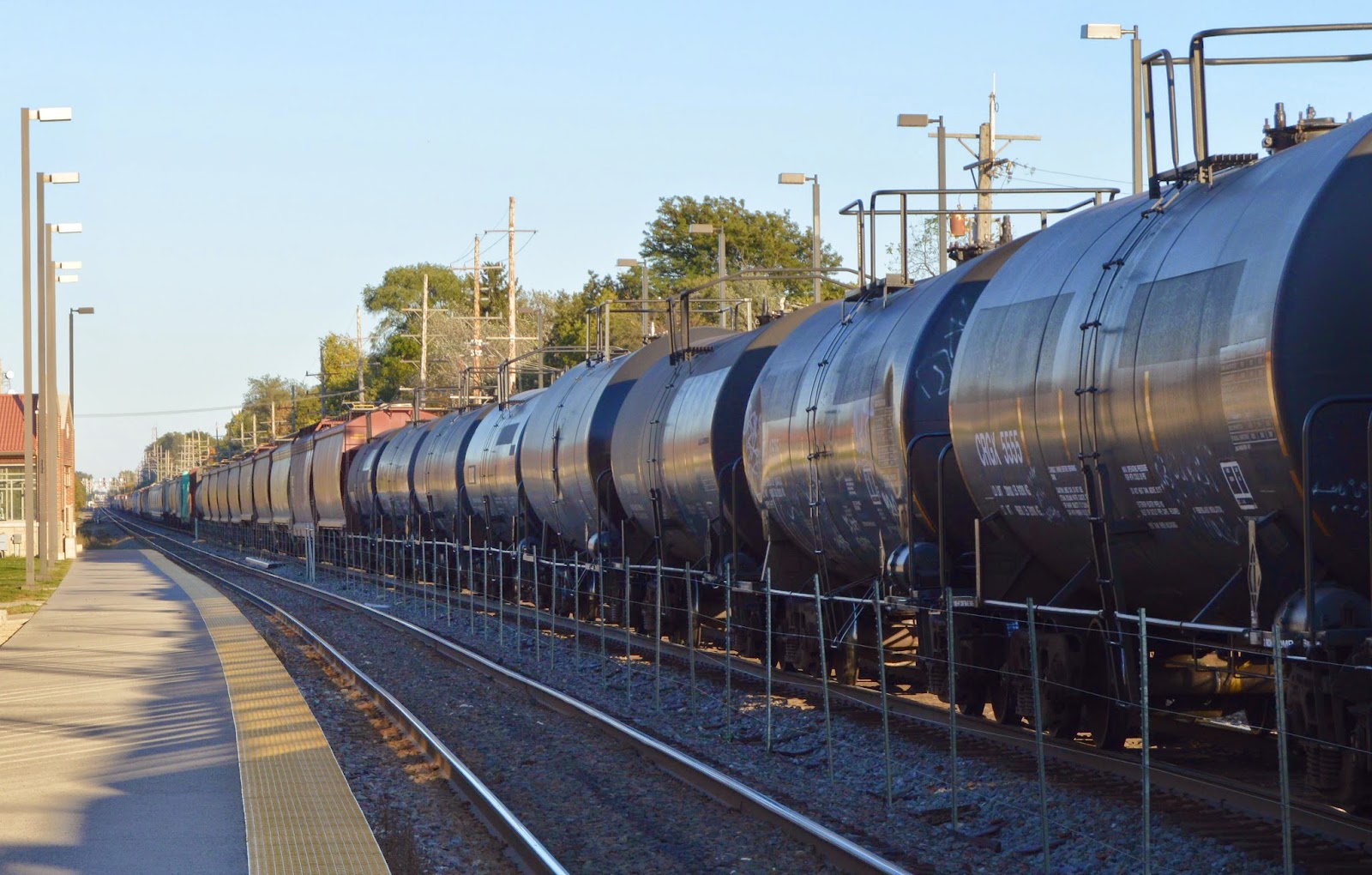 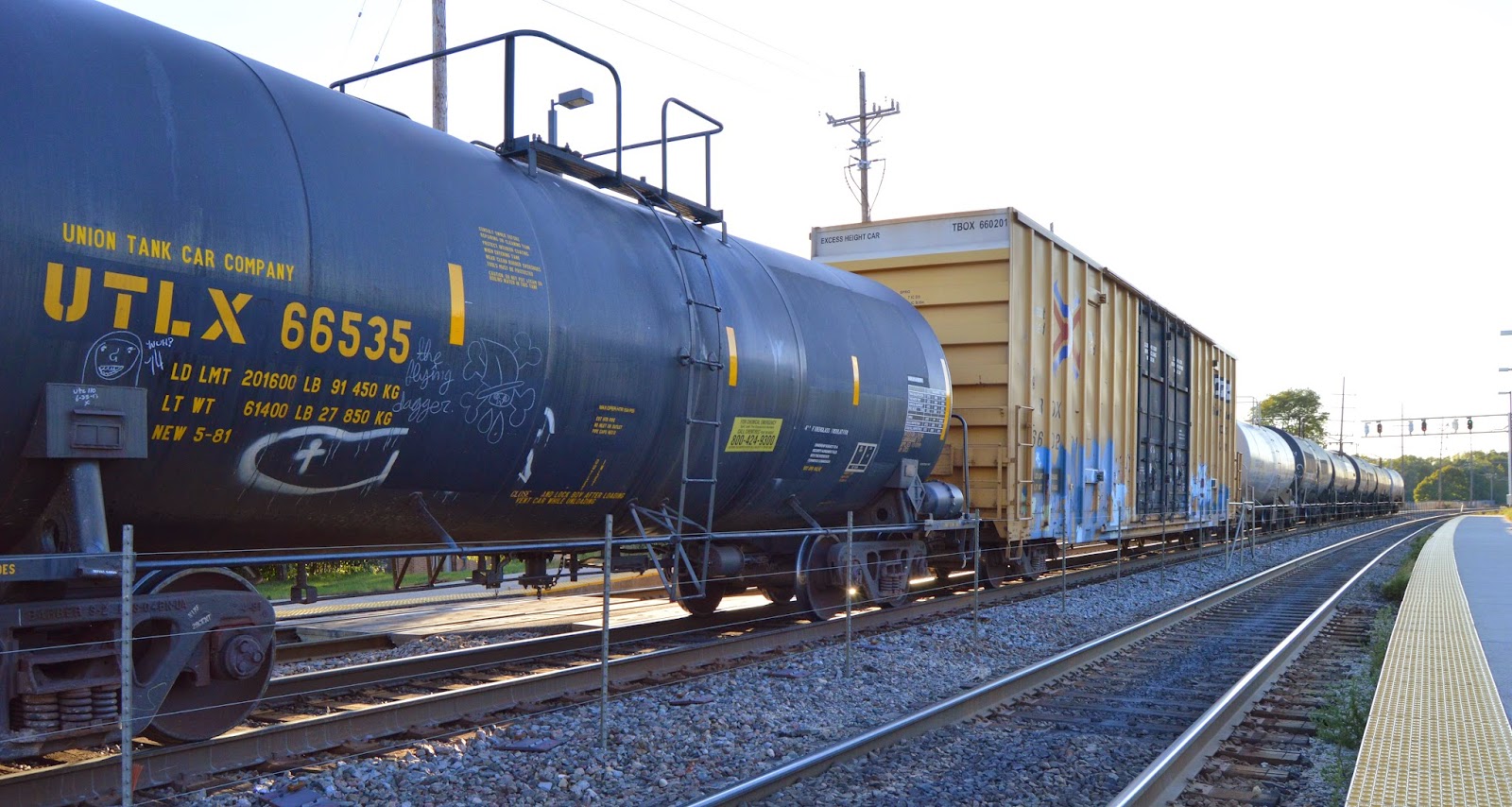 And this is a relatively short train because we see the end. And the only refer/boxcar that the train had.


Posted by Dennis DeBruler at 5:45 AM