While taking some pictures of a mixed freight from the Belmont Station platforms, I also took some pictures of the CREATE's $60.3M GS7 underpass project. The referenced write up does not describe the importance of the crossing very well. Downers Grove has 6 crossings -- all were grade crossings. The grade separation at Belmont helps relieve congestion at other crossings also. The write ups are also supposed to indicate if the crossing impacts emergency services. It didn't mention any impacts. But most of the bigger office buildings and hotels are on the north side of town whereas the hook-and-ladder truck is housed south of the tracks. And the hospital is north of the tracks but many of the people live south of the tracks. And some of the school buses for Downers Grove North High School serve houses south of the tracks. At least the kids from Woodridge can no longer use being blocked by a train as an excuse for being late in the morning. (During the rush hour, the gates will sometimes be down for a while because an express will trip the gates before they go up after a local, or vice-versa. BNSF tries not to run freight trains during the rush hours.) 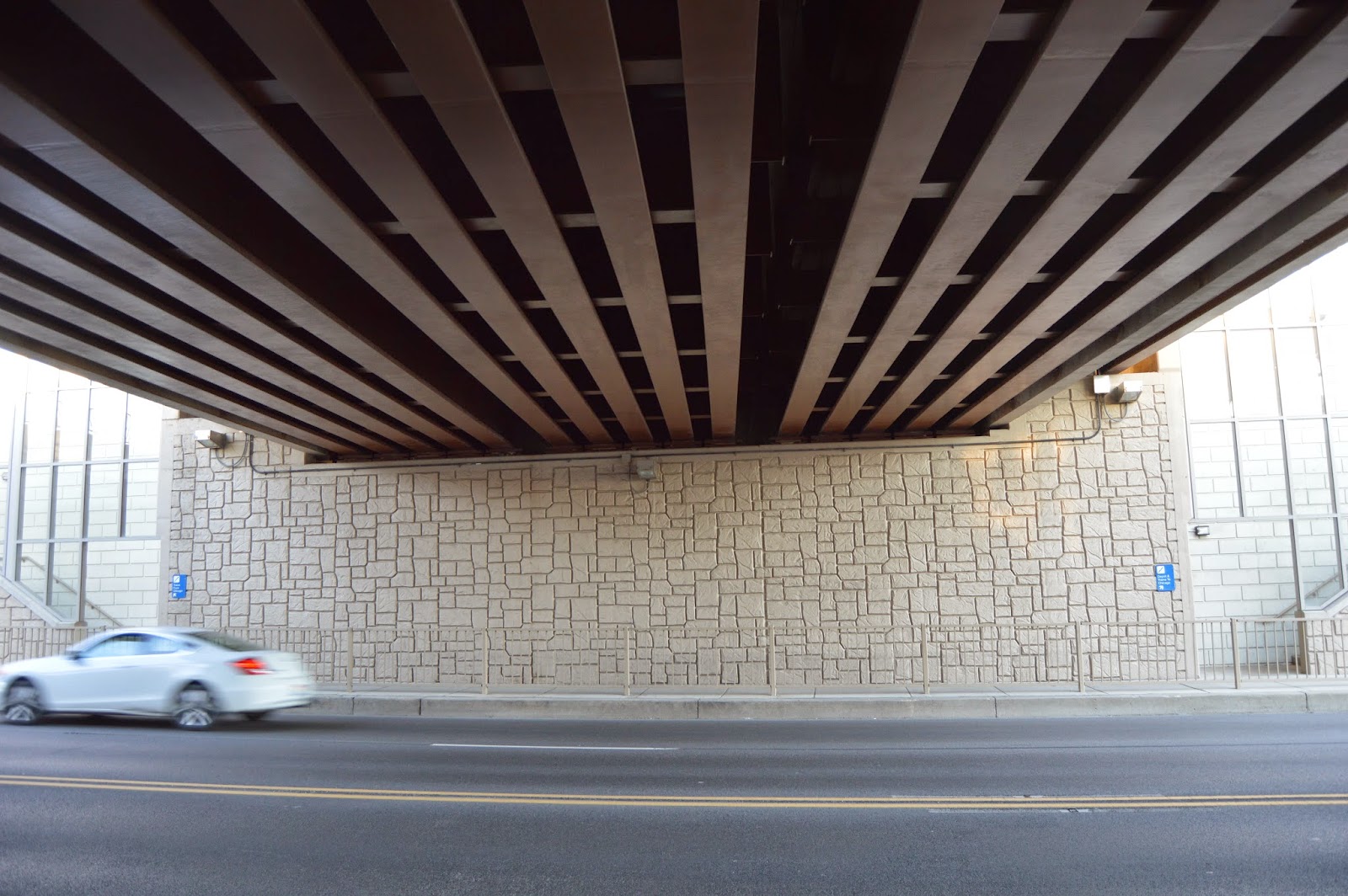 It is easy to see from the grouping of the girders that the bridge is supporting 3 tracks. The aesthetic touch on the retaining walls are grooves in the concrete. The pattern is more of an artsy statement than a suggestion of stone construction. But I still like it. 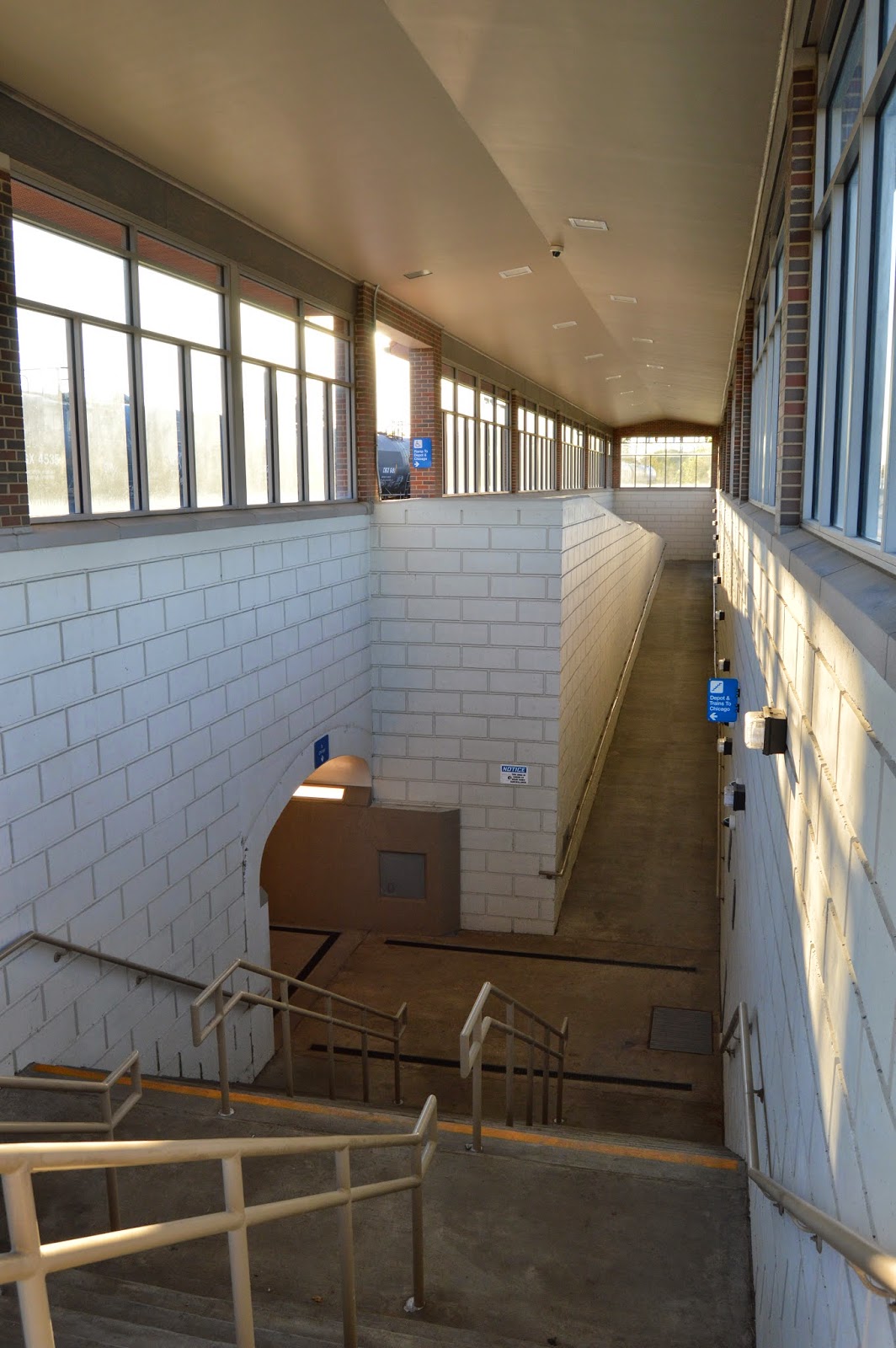 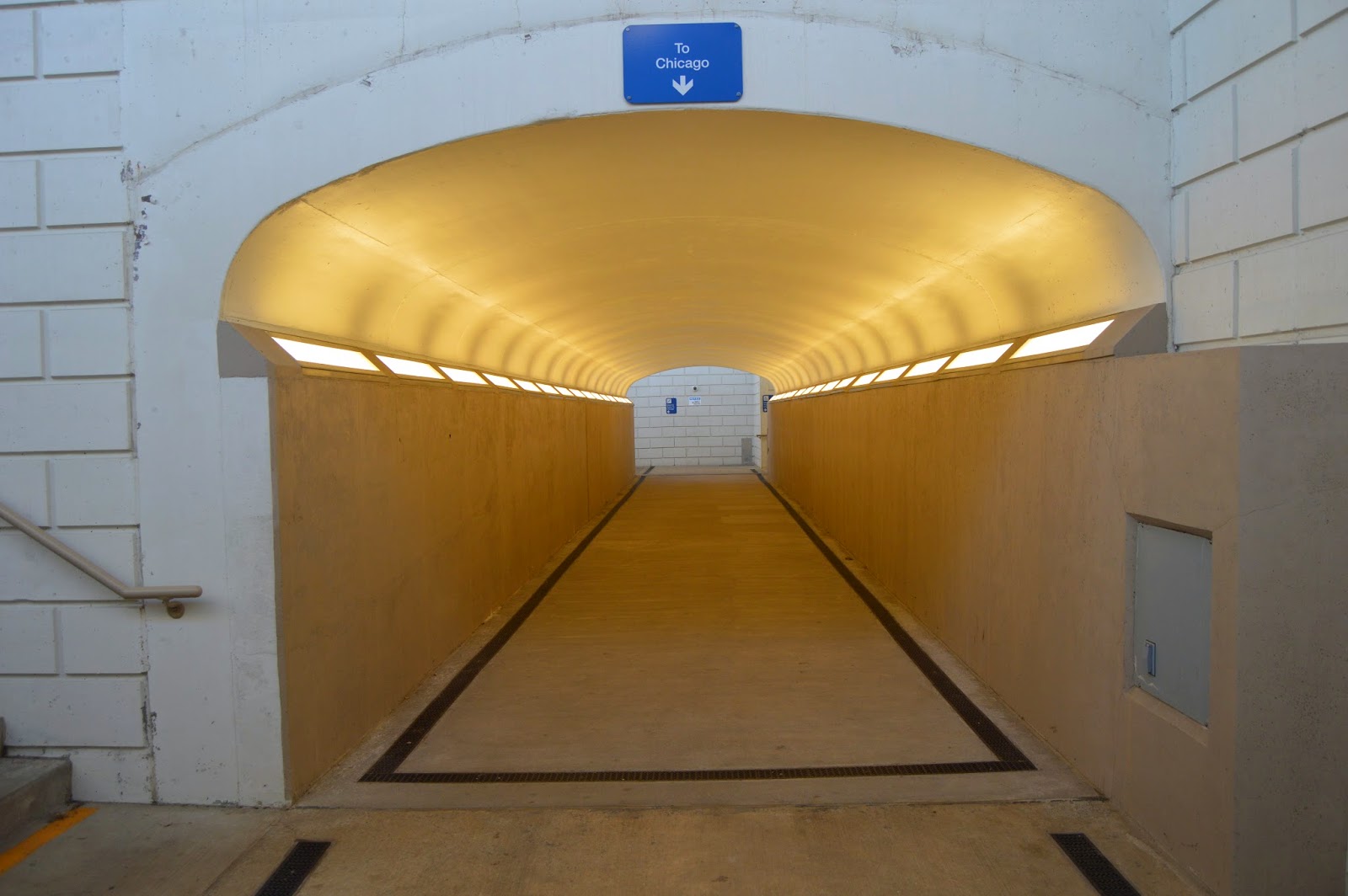 Since pedestrians can now cross the tracks using the underpass, the pedestrian tunnel should have been built at the Main Street station. That is, instead of two non-grade pedestrian crossings at Belmont and none at Main, there should have been one at each. Watching a bunch of people get off an express commuter then have to wait until they can cross the tracks to get to the buses or parking garage is painful. Especially if they not only have to wait for their train to leave, but for some other trains to also come through. A tunnel at Main would also help when you have to buy a ticket in the station for a westbound commuter. When I did it, if there had not been a small window between an eastbound commuter and a freight train, I would have stood on the south side of the tracks watching my commuter train leave the station because it arrived while the freight trains was still passing through.I wonder if I could have gotten a refund if I had been unable to cross the tracks to catch my train.

Update:
One day I got caught by this stoplight at Haddow and it struck me how you could see the lay of the land from here. So I went back (four times because of sunlight issues) to take overview shots. The natural grade here goes down into the "river valley" of the St. Joe Creek. The water tower in the background is on the other side of the creek valley and is next to 55th Street. Below I digitally zoomed into the underpass and station. Note the stoplights just above the bridges at Curtis street... 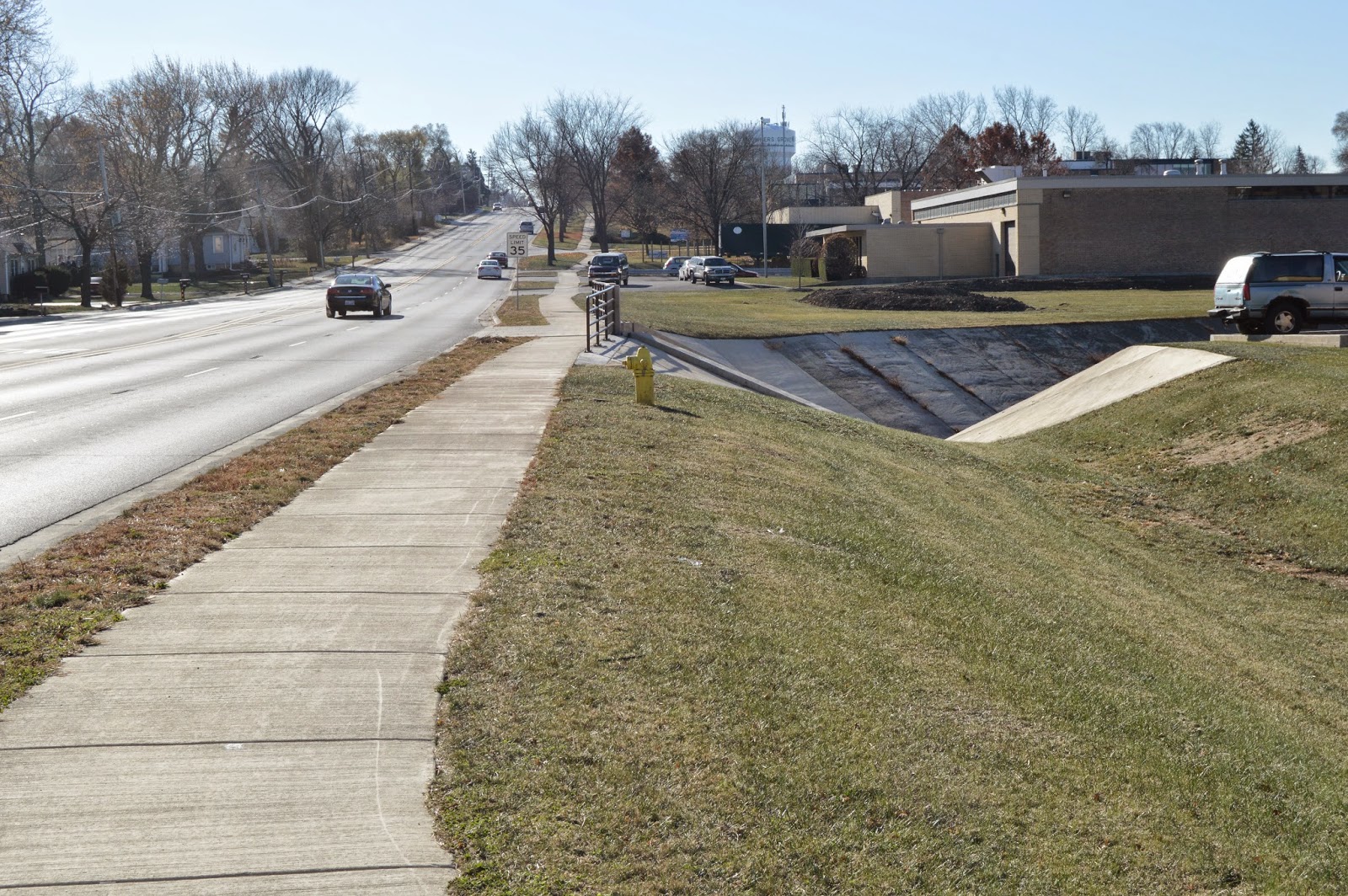 ...because the view to the right is taken looking south from that intersection so that you can see were the bridge for the St. Joe Creek is with respect to the underpass. It was the proximity of this creek that allows the underpass to be drained. However, we have had a heavy rainfall since the underpass was built, and it demonstrated that when the creek fells up with water, the underpass also fills up with water. 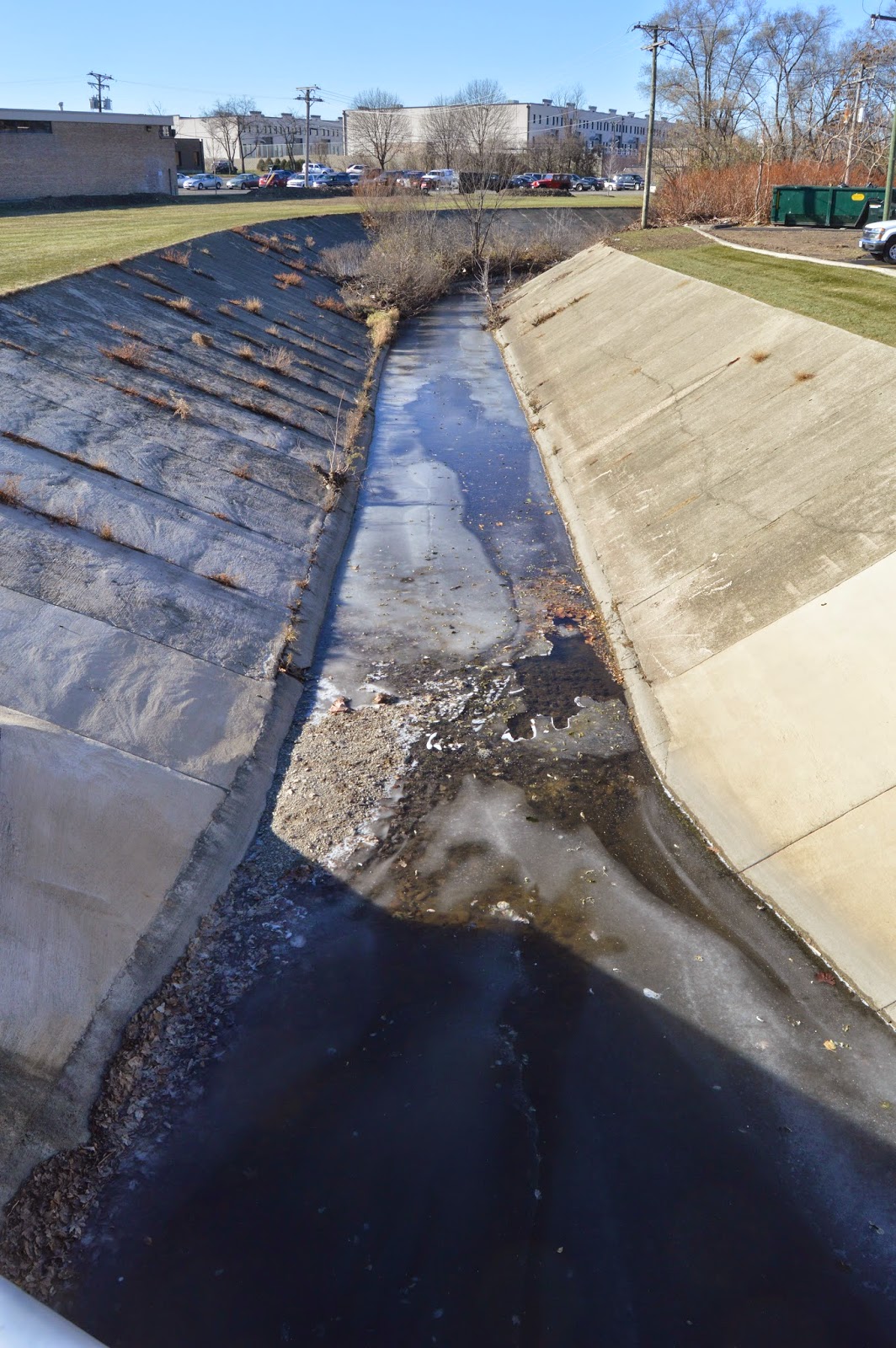 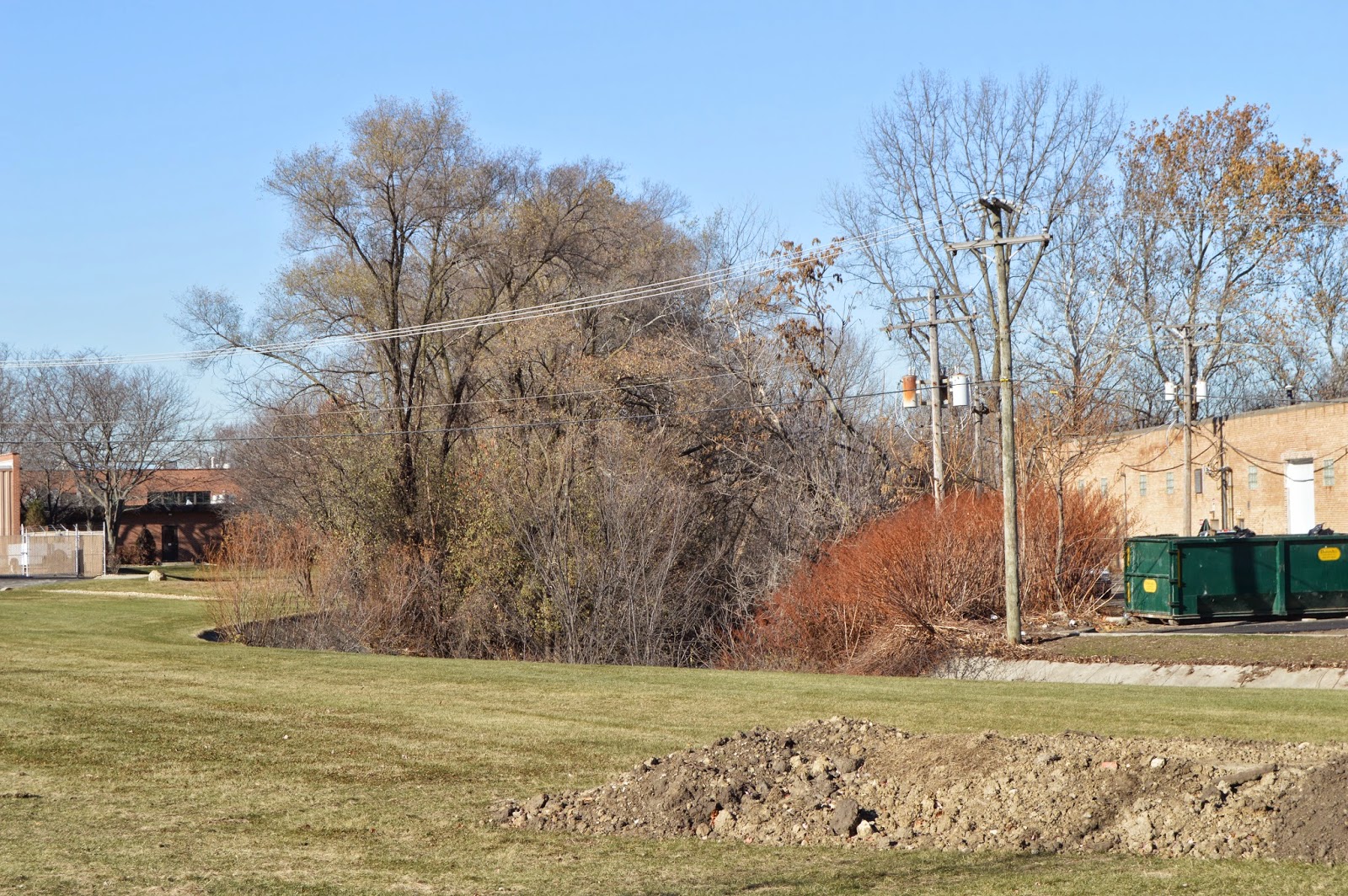 To the left is a view of the creek to the West from the bridge. Note the trees in the upper right hand corner. The view to the right is a closeup of those trees showing how nature can "reclaim" man made structures.

And below shows the new concrete that was part of a rebuilding in 2013. Unfortunately they waited until after the underpass was built to do this construction so that after lanes in Belmont were closed for the underpass construction they again closed lanes for this rebuild. 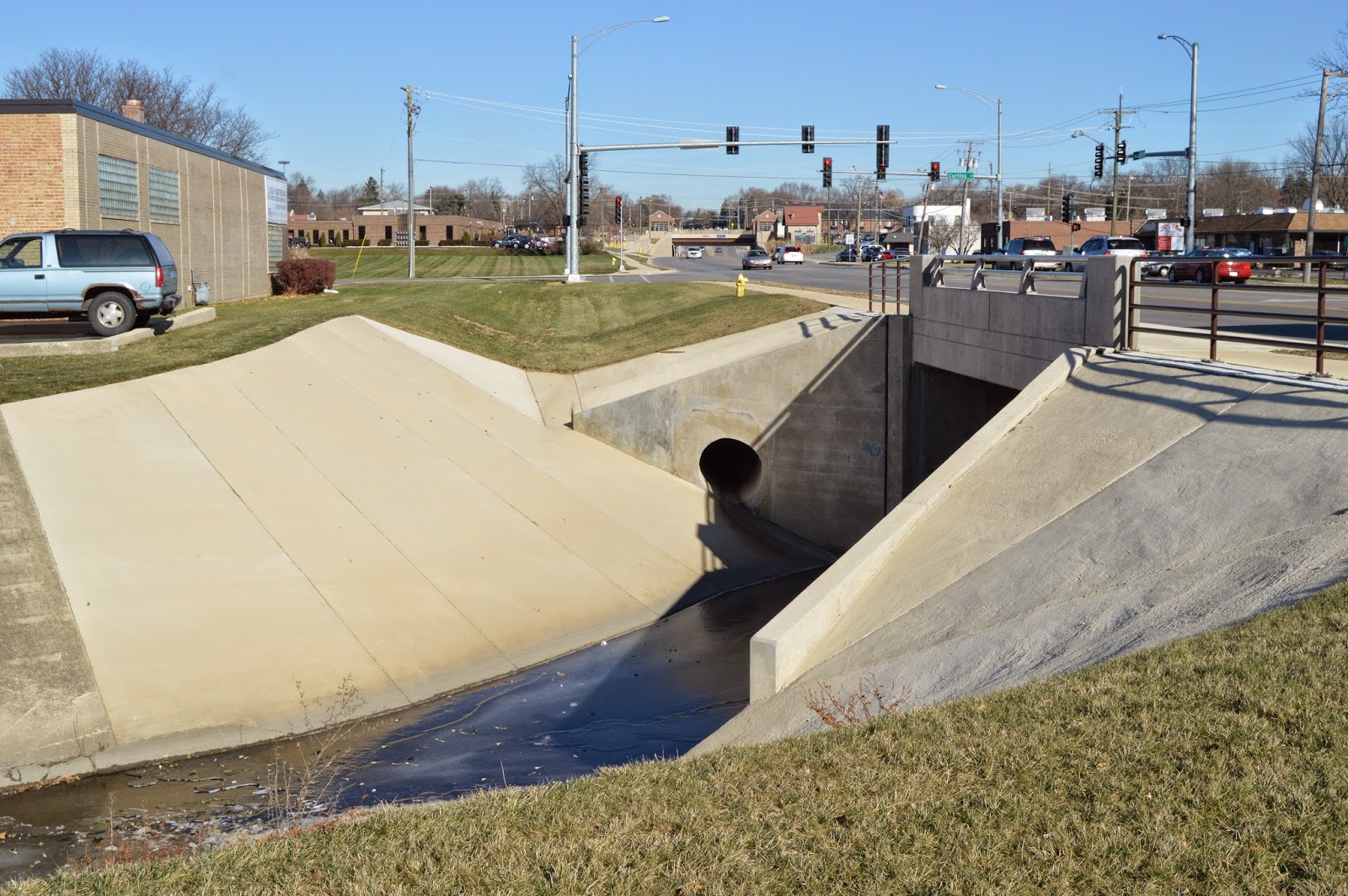 As I arrived at the Curtis intersection, an eastbound tank car train went through. I caught just the end of the second locomotive, 7829 (ES44DC). The first locomotive was also plain BNSF orange.

Then I took another northward facing photo that includes the station on the left.

And I zoomed in to determine that the tank cars did not have safety shields.

My first trip to Belmont had an intermodal train parked on the tracks. You can see the station between cars on the left and on the right, thanks to an empty car, you can see both the north and south entrance buildings for the pedestrian tunnel.


For completeness, here is a shot of the east side road ramp. Both of these ramp pictures were taken from the south end of the parking lot off Haddow. 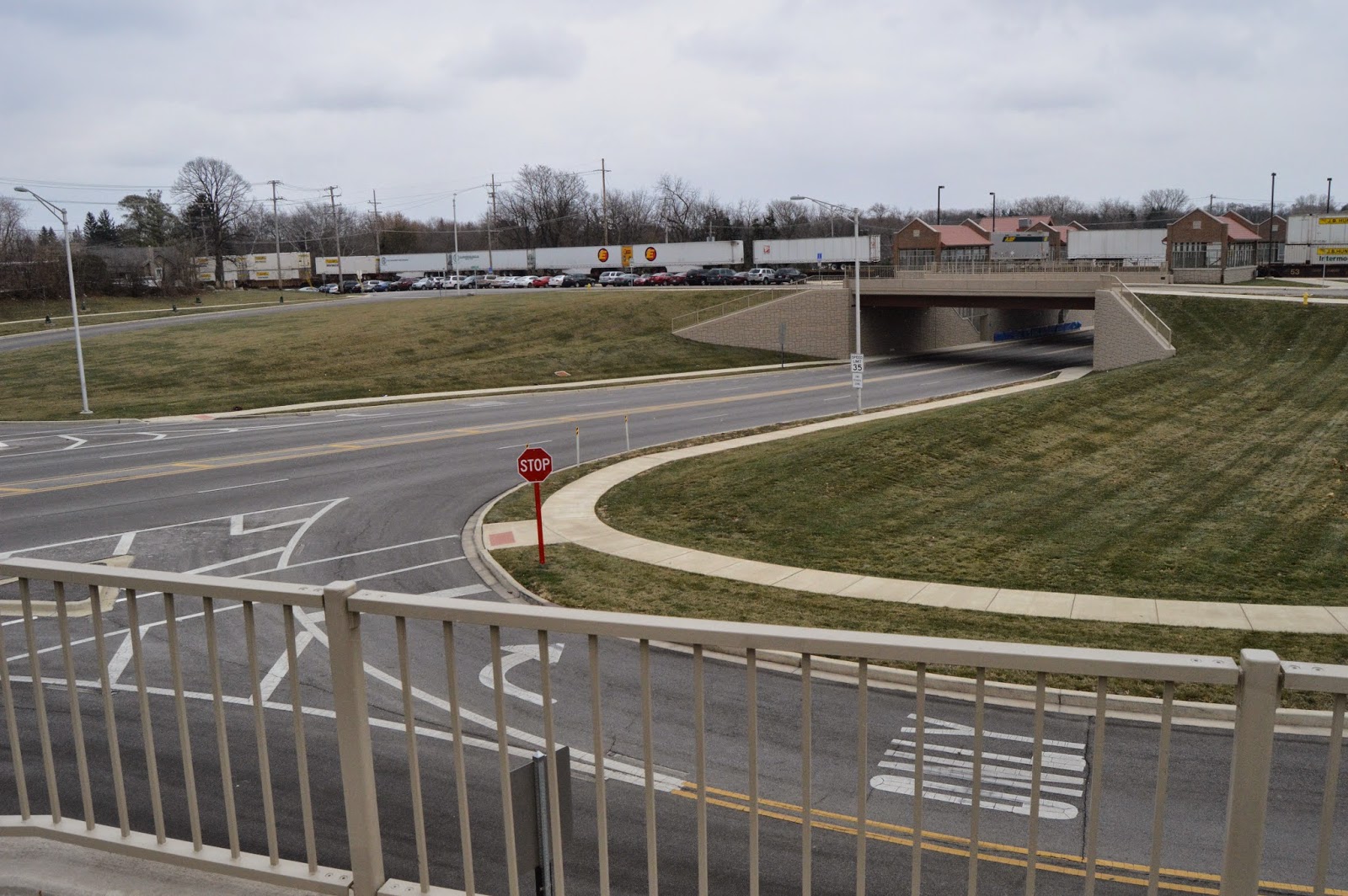 Since I've learned how to use the timeline feature of Global Earth, here is what it looked like in Mar, 2002 before they did the work. And that is how it continued to look through Oct, 2007.
The Aug, 2008 image shows some buildings have been torn down. By Oct, 2009 they had started to build the temporary 2-lane  road around the construction and the new parking lot on the north side.
In June, 2010, cars are using the new parking lot. There is an Aug, 2010 image, but it is of poor quality and not much has changed. Unfortunately, the next image is Nov, 2011 and the temporary BNSF tracks have been built and removed. If I remember correctly, the shoefly track was south of the mainline. We do see that the auto traffic is still diverted to the temporary road. They have made good progress building the embankments and excavating the west side of the underpass.
By March, 2012, they have moved the traffic from the temporary road to the west lanes of the underpass. They are still working on the east lanes.
By April, 2013, it is done; Belmont is back to being a 4-lane road.


Posted by Dennis DeBruler at 9:06 PM